Espionage is much more popular now on TV and at the movies than it is in literature. To wit, the Bond movies generate a tremendous amount of excitement for a franchise that dates back to the 1960s. On television, shows like the staid Madame Secretary, the stylish Scandal, and the sexy, twisty The Americans, the story of two Russian spies who have infiltrated 1980s America complete with mom jeans and and questionable interior design, have had both critical and popular success. Homeland on Showtime lost its way but seems to be back on an interesting track. A couple of excellent BBC productions, The Game (set in one of the heydays of espionage, the 1960s) and the gay-themed London Spy also delved into the themes of espionage quite deftly.

There is a dearth, though, of classic espionage—spy craft—in crime fiction, just a handful of writers bearing the banner of Frederick Forsyth and John Le Carré. This can be theorized in several ways: one is the popularity of cyberthrillers and a general appetite for international intrigue that’s more 24 than Tinker Tailor Soldier Spy. Torture thrillers are both common and popular: generally about right-wing operatives traveling around the world to extract the teeth and cut off the fingers of those who would mess with America. There are also some excellent historical espionage series currently running, by David Downing, Susan Elia MacNeal, and others.

That said, the two writers who are really pushing espionage forward are the excellent Olen Steinhauer and Chris Pavone, whose new novel, The Travelers, has just been published. Pavone’s previous novels, The Expats and The Accident, are companion pieces of a sort, with a few shared characters and settings (mostly in New York and in Europe). Central to the Expats is the marriage of Kate, a CIA operative who has just retired, and her husband Dexter, a security consultant to banks whose job takes their family (including two young boys) to live in Luxembourg. The Expats is really Kate’s story, and it’s about being a stay-at-home-parent (which Pavone was as well when his wife got a job in Europe and he left his as a book editor) and also being an interesting, self-sufficient adult, when your life is all school drop-offs and play dates and laundry and navigating a new culture with efficiency and grace.

To say that marriage is central to Pavone’s books is not to undercut them as espionage, as for him, the themes are the same. Secrets, boundaries, seductions, obligations both inside and outside the home: this is the stuff of life, and the stuff of spy craft. Pavone’s books constantly ask how well people can know each other, especially people who are married, and especially married people who also have ambitions outside the home. Pavone explores the pleasure we all take in having multiple allegiances, to keeping secrets from spouses, coworkers, friends, even children. If we can’t keep a secret from those closest to us, how can we know it’s a secret worth having?

Pavone understands that vulnerability is the handmaiden to status and power. In The Travelers, this is the bailiwick of Malcolm Somers, the boss at the magazine that shares its name with the novel. Malcolm’s wife, Allie, might just be having an affair, and though infidelity is fine for the goose it might be very dangerous for the gander. Other Travelers employees, like writer Will Rhodes and his wife, Chloe, whose duties for the magazine are nebulous, also traffic in secrets, sexual and otherwise. Yet power, especially corporate power, or private power, is really another term for secrets. There would be no need for adultery if people didn’t insist on fidelity, and none for theft without greed. Our baser nature is exposed in espionage.

Despite this truth, espionage is the most upper class category in genre fiction (certainly in crime fiction). Noir is working-class; it takes place in shabby neighborhoods and barrooms, on the docks or in the factories, in tenements and on city streets. Noir follows people whose mistakes lead to violence; whereas the mistakes of espionage—which generally transpires in board rooms, fancy hotels, and in dead-drops in bucolic parks—lead to war. Espionage also has indisputable literary roots, in Somerset Maugham’s Ashenden and then the great novels of Graham Greene, chronicles of crumbling empires with clear caste systems.

Travelers is by far Pavone’s most sprawling and ambitious novel. It’s messier, but has more life in it, more emotions, more characters, more duplicity, more exotic settings and sticky situations. He’s an action painter with a big canvas and pots of color to pour on his canvas. This is a luxurious book, full of people for whom indulging is a lifestyle. The accretion of details about luxe townhouses and town cars and zipping from Capri to Buenos Aries also suggests mild satire of a certain kind of person (really, a highly bred and educated New Yorker). Pavone’s characters are clever but (with one possible exception) not brilliant. The glamour of their exotic, exalted lives also does make the mundane exciting. Meetings that might be transactions between colleagues end up having greater import. Business trips turn into assassinations. And Pavone is an equal opportunity writer: his women, on the whole, might even be smarter than the men. There’s something almost Hitchcockian about Pavone’s worship of smart, cool women, like the agent Irene in his publishing novel, The Accident, and the cool deputy at Travelers, Gabriella. His women are certainly quicker to see the angles, and better overall at the game. While Pavone isn’t a masterful plotter, he’s good, and the wit packed into the book does keep the pace pleasantly brisk.

In person, Pavone is not the six-foot WASP I expected. (Full disclosure: we met at a bar. Crime writers like to drink.) He’s a natty dresser who talks fast, piling anecdote on anecdote. He’s both funny and an easy laugh, a scrappy guy with the outer boroughs still very much in his voice and mannerisms. Even if he’s talking private schools and downtown real estate, he’s still aggressive in the way New Yorkers are, a man who men like and women find amusing. I suspect this likability, like charisma, can’t be taught or bought. Pavone would have made an excellent spy. 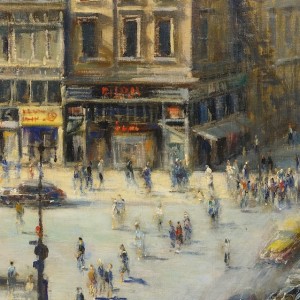 A centrist Democratic president, dutifully supported by the party establishment, battles a radical insurgent for that party's...
© LitHub
Back to top