David Reid on Truman, Wallace, and the Seething Immorality of Greenwich Village

A centrist Democratic president, dutifully supported by the party establishment, battles a radical insurgent for that party’s soul. An ambient fascism creeps into mainstream discourse… The year is 1947, the president Harry S. Truman, the insurgent his predecessor as vice president, Henry A. Wallace, who claims to be FDR’s true heir, and is positioning himself to run as the candidate of peace and social democracy.

On March 13, 1947 president Harry S. Truman sent a note from Key West, Florida, where he went for working vacations, which his daughter, Margaret, remembered as “one of the most important letters my father ever wrote me.”

A day after proclaiming the Truman Doctrine, officially marking the onset of the Cold War (his address to congress asked for $400 million to combat communism in Greece and Turkey), he wrote, “call them what you will, Nazi, Communist or Argentine Republics,” there was no difference between dictatorships, and those who pretended otherwise were accomplices of the dictators: including “the American Crackpots Association, represented by [Joseph] Davies, Henry Wallace, Claude Pepper and the actors and artists in immoral Greenwich Village.”

The “crackpots” were politicians Truman knew well and considered soft on communism—Wallace, his predecessor as FDR’s vice president, was looming as a rival in 1948. As for their co-conspirators in Greenwich Village, Harry Truman was on fairly remote terms socially and intellectually with New York City, which he only visited two or three times until he was deep into middle age; the first was on his way to the Western Front in World War I as an artillery officer, when he had nothing good to say about New York in letters to the future Bess Truman. It is possible that in 1947 he had never set foot south of 14th Street.

But like millions of Americans of his age who lived west of the Hudson River, Harry Truman felt he had learned all he needed to know of Greenwich Village from popular magazines like the Saturday Evening Post, and formed his opinions accordingly. In fact he would likely have first heard about the Villagers and their wicked, wicked ways in the 1910s, when the maze below 14th Street was reputed—with justice—to be a hotbed of avant-gardes, dissidents, and unorthodox sexual arrangements—at a time when he, already past 30, was bound like an indentured servant to the mortgaged family farm near Independence, Missouri, until his father’s death and the war freed him from what Marx called “the idiocy of rural life.” Thirty years later, the Village was still in his imagination a den of decadents and subversives, thronging with prospective voters for Henry Wallace if he ran for president.

How was the Village faring in the atmosphere of the Cold War, just made chillier, compared with earlier days? During and after the First World War, official repression and dissension within (“poets informing on other poets”) closed on the Village during the hysteria of the Red Scare, bringing to an end the cultural glories and daring politics of the “Lyric Years,” during which such geniuses as Edna St. Vincent Millay and Eugene O’Neill announced themselves to the world, and men like John Reed went to Mexico and Russia to cover revolutions.

In 1918, Max Eastman, Floyd Dell, Art Young, and other editors and artists at the Masses, the flagship of the Left, which published Reed, Carl Sandburg, Dorothy Day, and Mike Gold went on trial for sedition, accused of obstructing the war effort. Nothing at all like that happened during the Second World War, in which opposition was insignificant: “everybody believed in America and her cause: there was no rebellion,” the brilliant young Columbia University professor C. Wright Mills wrote in White Collar (1951). “. . . There were no plain targets of revolt; and the cold metropolitan manner had so entered the soul of overpowered men that they were made completely private and blasé, deep down and for good.”

“It was characteristic of the Jazz Age that it had no interest in politics at all,” wrote Scott Fitzgerald. In Greenwich Village, the antic young adopted the banjo-playing Bobby Edwards’ motto: “Why be an industrial slave, when you can be crazy?”  After the Wall Street crash of 1929, the apolitical 1920s were succeeded by the fervent 30s, in which intellectuals regained their élan.

It was the hour of programs and panaceas, sects and little magazines, some of which continued into the 40s and 50s, while others faded fast or were absorbed into the New Deal regime, via Federal One, its giant art and literature projects.

In Starting Out in the Thirties Alfred Kazin remembered his youthful attendance at the editor V.F. Calverton’s parties in Greenwich Village, and “the characteristically lean, straight, bony Yankee individualists with ruddy faces and booming laughs, the old Harvard dissenters, leftover Abolitionists, Tolstoyans, single-taxers, Village rebels of 1912, ever lasting Socialists and early psychoanalysts”; while he represented the “radical, proletarian-bohemian, immigrant New York,” which disputed the proper interpretation of Marx and Trotsky’s heresies in the cubicles of City College and the cafeterias of the Village.

The preeminent little magazine, approaching its maximum intellectual sway and prestige in the 1950s, was the “new” Partisan Review; the original was founded in 1934 under the auspices of the Communist-inflected John Reed Club. As its editors Philip Rahv and William Phillips wrote later, it “emerged from the womb of the Depression crying for a proletarian and a socialist America.” But the youthful mandarins resisted the Party’s philistine aesthetics, which valued fidelity to the party line above all, and in 1937, joined by Dwight Macdonald, a born gadfly with a Yale degree, they launched PR as a highbrow journal devoted to modernism and anti-Stalinist radicalism.

In an age of criticism, PR was “nothing if not critical,” publishing notable essays (“interpretations”) by Edmund Wilson, Andre Gide, Clement Greenberg, T. S. Eliot, and Macdonald, as well as stories and poems by Mary McCarthy, James Agee, Lionel Trilling, Wallace Stevens, E. E. Cummings, Robert Lowell. PR was published out of the old Bible House in Astor Place, close to the tenements of the Lower East Side, at comically close quarters to the party-lining New Masses. The postwar 40s found Rahv living in a townhouse on West 10th Street, Phillips in an apartment on West 11th, Macdonald, in a row-house on East 10th, commanding their few thousands of readers, and overawing the intellectual young (Macdonald, in his anarcho-pacifist phase had left PR and founded his own journal, Politics during the war.)

According to Irving Howe, who coined the term “New York intellectuals,” PR had a gift for making enemies and the even rarer one of keeping them. To which may be added the infectious self-regard of the part of its inner circle, who wrote short stories, poems, and short novels about each other: Mary McCarthy’s The Oasis: Delmore Schwartz’s story “The World Is a Wedding”; Jean Stafford’s story “Children Are Bored on Sundays,” written when she was married to Robert Lowell; Lowell’s poem “Man and Wife,” about his second wife, Elizabeth Hardwick, recalling how, first smitten, he “outdrank the Rahvs in the heat / of Greenwich Village, fainting at your feet,”

Even in the 1940s, bohemians in Greenwich Village were beset with gentrification, tourists (“Are you a merry Villager?”), a censorious or satirical press (Mary McCarthy made a chauffeured tour for the New York Post, and ridiculed the latest types). Compared to former days, the political temperature was tepid, even at the once-quarrelsome Waldorf Cafeteria. “A lanky, hot-eyed Trotskyite calls two icy-eyed Stalinists a bunch of reactionaries, but there is no fight. A Wallaceite laments to me that most of her Village friends are deaf to her pleas, that laconically that they are going to vote for Truman—‘Not to break up the Democratic Party,’ they say! Imagine that for a reason!” It was all rather sad, like the parties that broke up at midnight when once they would have just been getting started.

If a curious tourist had peered into the windows of the San Remo, which the memoirist Michael Harrington places at “the uneasy intersection of Greenwich Village and Little Italy,” she might unknowingly have caught sight of various sectarians of the left, Socialist, Communist, and Trotskyists—even an anarchist or two, like the abstract expressionist Barnett Newman; they were variously seated, among the customers from the neighborhood, interlopers from burgeoning suburbia, and and tragic gypsies like the poet and novelist Maxwell Bodenheim, destined to a gaudy murder. Harrington got to know the many sailors of radical persuasion, including veterans of the Spanish Civil War. The early Cold War purges and blacklists, he observed, gave the mariners “plenty of time to drink and reminiscence about Spain in the Remo.”

In the election of 1948, contrary to Truman’s expectations, Henry Wallace carried not a single precinct in Greenwich Village or anywhere else in New York City except the East Bronx, but his vote state-wide was sufficient to deny Truman New York’s electoral votes. Michigan and Maryland were similarly lost to the Democrats. The defection of a few states in the old Confederacy to Strom Thurmond’s breakaway, pro-segregationist “Dixiecrat” party was not so costly. In 1948 the electoral balance of power still lay in the northeast. David Riesman, the principal author of The Lonely Crowd, the most famous work of sociology to come out of the 1940s, wrote later that unlike those who considered 1948 a catastrophe for progressivism, he was amazed that 1.2 million had actually voted for the candidate of the left, when it was a bold thing to do.

Ten years later would see the Beats and their camp followers in possession of bohemia, which by now was moving eastward into the Lower East Side. The 1960s’ armies of the night were beginning to assemble. The Village had survived cold seasons before.

David Reid's essays, articles, reviews, and interviews have appeared in Vanity Fair, The Paris Review, The New York Times, The Washington Post, the Los Angeles Times Book Review, and in several anthologies, including The Pushcart Prize XII. This book, The Brazen Age, is out now. He lives in Berkeley, California. 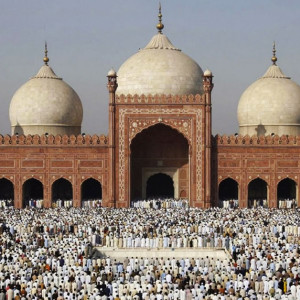 When I was in my teens, I picked up a yellowing copy of a P.G. Wodehouse novel from my mother’s bookshelf and cracked it open....
© LitHub
Back to top