Searching for Queerness in the Corners of History

On Jenn Shapland and "Hunting Lesbians"

When Wild Nights With Emily—a film that dramatizes the romantic relationship between Emily Dickinson and her lifelong consort (and her brother’s wife) Susan Gilbert Dickinson—was released last year, most reviews described it as a comedy or a romp. And certainly, the movie had a ton of great jokes, Molly Shannon’s irreverent and sarcastic portrayal of the poet was infused with humor, and sequences with women giddily fleeing their lovers’ beds under the cover of night were, in fact, romps. In focusing on the humorous aspects of the film, however, a deeper point may have been downplayed, one that has greater historical resonance.

The film is built around a discovery by academics: Where published versions of Dickinson’s poems were dedicated to a “Sam,” the original copies showed that the word “Sue” had been removed and replaced. In the final scene of the movie, we see Mabel Loomis Todd, Dickinson’s brother’s mistress and an early editor of Dickinson’s poems, literally take an eraser to Dickinson’s papers, scrubbing Sue out of the narrative. The closing credits begin in almost-silence, with just the sound of an eraser on paper echoing. Half-drunk on fizzy rosé and emotionally unprepared for this, the first time I saw the movie I burst into tears.

The past few years have seen the re-queering of a number of biographies that previously had been de-queered in the same way that Wild Nights With Emily unerases Sue’s name from Dickinson’s poems. This month, Jenn Shapland’s first book, My Autobiography of Carson McCullers, recasts the story of the lauded writer in the light of her love letters to, and romance with, a woman named Annemarie Schwarzenbach. Shapland found the letters while working as an intern in the archives at the Henry Ransom Center, as well as McCullers’ therapy transcripts from sessions with Dr. Mary Mercer, which have never been incorporated into any other published biographies on the write.

Part of the reason the transcripts haven’t been previously used as biographical source material is their relatively recent incorporation into the record: They didn’t surface until after Mercer’s death in 2014. That’s the practical reason, the measured one, the academic one. But why has no one, until now, published any work on the contents of these transcripts? For that, we can only rely on informed conjecture, perhaps drawing on the reasons Shapland cites for why McCullers’ correspondence with Schwarzenbach has been left out of the author’s biography. There’s a basis for comparison: In addition to being McCullers’ therapist, Mercer was also a romantic partner.

“Our affection for each other had blossomed undetected by in full view.”

Shapland doesn’t suspect outright censorship  as the force sidelining McCullers’ relationship with Schwarzenbach: “Many of the details of Carson’s lesbian life are right there in plain sight. It’s just that they are housed within another narrative: the straight narrative, the one in which inexplicable crushes on and friendships with women surface briefly within the confines of an otherwise ‘normal’ life.”

In her recent memoir A Song For You: My Life With Whitney Houston, Robyn Crawford, music industry veteran and life-long friend-and-more to Whitney Houston, describes her girlhood romantic relationship with Houston in similar terms, detailing how Houston would sit on her lap or hold her hand in public without anyone suspecting their relationship was deeper than friendship. “Our affection for each other had blossomed undetected by in full view,” Crawford writes. The singer’s family and record company struggled to keep this side of Houston’s sexuality undetected, thwarting gossip media speculation throughout her career.

Because queer identity can be folded into, to use Shapland’s phrase, “normal life,” to find queer identity takes extra legwork. Shapland, whose book is as much about her own queerness as it is about McCullers’, went to work at Yaddo to research McCullers’ own time at the prestigious artists’ colony. There, Shapland dissected McCullers’ relationship with Yaddo director Elizabeth Ames and noticed that she was looking for evidence that the woman’s relationship went beyond the professional. “I realized with a start that I was looking for clues. I was a sleuth. I was a huntress. I was hunting lesbians,” she writes.

Culturally, hunting lesbians and queer people has reached something of a fever pitch. Positive confirmation bias from cases like Houston’s along with queer media’s embrace of celebrities like Kristen Stewart contribute to public speculation about other celebrities, including, recently, Harry Styles, who has been perceived as queer because—through a combination of being born at a particular time in history and becoming famous for making art that is primarily consumed by young women—he’s free to use, without consequence, queer coded language and gestures, the kind of clues that were once a necessary community tool for  closeted individuals throughout history. Whether Harry’s queer (and because he refuses to say one way or another, we have no way of knowing), Harry reads as queer, because a entire history of reckoning with the many facets of queerness has led to a more widespread cultural familiarity with it and an eagerness, in many circles, to point it out.

However, that eagerness, and a recent drive toward re-queering, also exists simultaneously with an older language of obfuscation. Biography and memoir are bound to address identity, and many of these new works are, to greater or lesser extent, about the slipperiness of queer identity in particular: the way a speculation, a rumor, or an erasure can invoke queerness when there is none or obliterate queer identity that should be preserved. As much as they reveal, biography and memoir can just as easily create barriers to understanding a person’s queerness.

No matter how much theory you cite, no matter how rigorously you narrativize your own life, a queer life defies easy conclusions.

I’d rather live in a world where queerness is something courted and celebrated instead of hidden and derived, and there’s an argument to be made that queerbaiting muddies the waters. But complication is in fact part of the very nature of queer identity. In her queer memoir The Argonauts, Maggie Nelson weaves queer and feminist theory from Judith Butler, Monique Wittig, and Luce Irigaray with fragments from her life as a writer, as the female-presenting half of a queer couple, and as a pregnant woman. The fragments are the form that serves her function; no matter how much theory you cite, no matter how rigorously you narrativize your own life, a queer life defies easy conclusions.

Wild Nights With Emily and the new Apple+ series Dickinson portray not just the romance between Emily and Sue, but the voracity of their sexual connection; in a scene in the second episode of Dickinson, Sue goes down on Emily while the show connects Emily’s orgasm to a mock volcano’s eruption and lines from Emily’s poem “I Have Never Seen Volcanoes.” Simultaneously, the Emily Dickinson Museum’s website, in a blog post called “Emily Dickinson’s Love Life,” dedicates a quick sentence to the subject of Dickinson’s relationships with women: “Her female friendships, notably with schoolmate and later sister-in-law Susan Huntington Gilbert and with mutual friend Catherine Scott Turner Anthon, have also interested Dickinson biographers, who argue whether these friendships represent typical 19th-century girlhood friendships or more intensely sexual and romantic relationships.” The rest of the 600-word article describes her “significant male friends” and a judge who, according to the article, almost married Dickinson at the end of her life. Even as some texts uncover repressed narratives, others are content to ignore the same clues and stick to old versions of the stories.

What these overlapping layers of revealing queer identities and repressing them reveal to us is that the inherent slipperiness of queer identity creates plausible deniability, giving cover to those that would erase that identity. Shapland writers, “If Carson was not a lesbian, if none of these women were lesbians, according to history, if indeed there hardly is a lesbian history, do I exist?” Her book can be read as an assertion of the right to exist, for McCullers’ queerness to be revealed and made important, and for Shapland’s own identity to take a name and a shape. The triumph of the book is that Shapland allows McCullers’ identity, along with her own and those of other queer people, to be both visible and mutable.

Despite loving Shapland’s book about the messiness of building identity, despite reveling in the idea of the un-pinpointable-ness of queer identity, I found myself hunting lesbians while reading Crawford’s memoir about her own queer relationships. I was frustrated by Crawford declining to label herself: “We never talked labels, like lesbian or gay. We just lived our lives and I hoped it could go on that way forever.” After she and Houston stopped having a physical relationship, they lived together for many years; “roommates” are an infamously queer-coded term in certain contexts, and Shapland even describes using that term to describe a queer relationship she had before coming to better understanding of her own sexuality. While they were roommates, Houston fired a dancer that Crawford dated, and once when Houston dressed up for a dinner with Eddie Murphy, Crawford wished Houston had made that kind of effort for her. “She’s jealous,” I wrote in the margins, over and over again.

Even in a queer memoir, I can’t stop reading into gestures, looking for a deeper story. Maybe, with identity so mutable, speculation is an intrinsic part of queer identity as well.

Catie Disabato's debut novel, The Ghost Network, was published by Melville House in 2015. She has written criticism and commentary for Buzzfeed, LitHub, and Medium. She lives in Los Angeles. 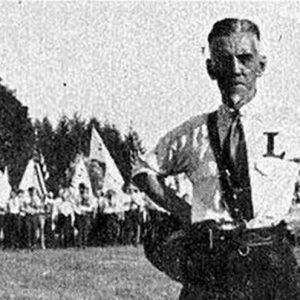 In 1936, Germany and America were gazing at each other across an ocean, and each offered a reﬂection of race hatred to the other....
© LitHub
Back to top