A Day in the Life of Urban Beekeeper Andrew Coté

Being in the big city, working bees and selling honey, has been good to me. But every June, I receive regular alerts about swarms of bees making trouble, and I drop everything to tend to them.

My pal Tim O’Neal, also a beekeeper, once said, “Trying to get bees not to swarm is like trying to get teenagers not to have sex.” It’s an entertaining observation, and in Tim’s case, no doubt purely speculative, and I disagree. Hives of honey bees can certainly be inspected regularly and managed in such a way as to prevent swarming in the majority of cases. This, of course, does not always happen, and I will sheepishly admit that my bees do on occasion swarm. However, it is highly unusual for my city bees to swarm, because I check them obsessively to prevent the kinds of problems that are inherent with an urban swarm. It took a great deal of effort on behalf of a great many people to bring beekeeping back into the legal realm, and I want to be a force in word and deed to keep beekeeping safe, responsible, educational, and fun. City swarms, while often providing entertaining stories, are not exactly positive press. A swarm will also cut back on the productivity of the hive, and I want urban hives to make honey.

Swarms increase as the weather gets warmer, and I often assist the New York Police Department in corralling the quivering football-sized lumps. This is how I met Tony Bees. Born in East New York, Brooklyn, the son of immigrants from Crete, Tony settled in Rego Park, Queens, where he lives and keeps beehives in his small backyard. Many years ago, the NYPD called me up to help them collect a swarm of bees from a tree in front of a clothing store in Brooklyn—the lieutenant on the scene happened to be from Westport, Connecticut, and he knew of me from the farmers’ market there, and somehow the department had gotten hold of me. I was in Connecticut at the time, but I drove all the way down to the Bed-Stuy area of Brooklyn to help out. That’s when I met Tony, who, as a bee enthusiast himself, had come out with his departmental colleagues that day, though he had no equipment with him at the time. Tony watched as my father, my friend Mio Shindo, and I captured the swarm with ease. We became fast friends, and for years captured swarms together and exchanged beekeeping advice. Tony even sometimes bought buckets of honey from me and sold it under his label.

Mio, visiting from Japan, was not a beekeeper except when she stayed with me. I met her in Turkey in 2000 when she was a high school student who had gone on her own to Turkey to do earthquake relief work. We stayed in touch and she occasionally spent summers with me working at the farm. Later she graduated into swarm captures and feral hive rescues, and has since worked bees with me on BWB missions to Haiti and Tanzania. Now she works for the United Nations in places like Sarajevo and Lagos in a non-bee-related capacity, working with refugee populations—which, in a sense, swarms are as well.

My friend Jon Huang is a graphics editor for The New York Times and a beekeeper. He and his wife, Megan, generously offered their apiary in Manhattan as a place where some of the NYCBA apprentices could get their hands dirty (sticky?) with a different set of bees. When it came time for them to move their growing family across the Hudson to Jersey City, some volunteers from the NYCBA helped them screen in and carry their two strapping beehives down from the fourth floor walk-up where they lived. The NYCBA tries to cultivate the sort of congeniality found in the hive among its members and participants. Sometimes we get it right.

Jon texted me right away when he spied a swarm nestled on the limb of a tree on West Seventy-second Street one June afternoon. I was not too far away with my beekeeping friend Molly Conley, an Iowan transplant to New York, when I got Jon’s message. The swarm was a bit high up for me to grab without my truck and ladder, but as I had a good parking spot, which is worth quite a bit to New Yorkers with vehicles, I didn’t at that moment want to move the truck and lose my precious parking space just for the sake of three or four pounds of bees. Plus it gave me an excuse to phone my friend Tony and let him get one of his much-coveted overtime gigs, which was something I often assisted him in getting, at his insistent requests. So I called Tony, and we waited. And waited.

Since Tony’s overtime clock started when he started driving, he was not always in a hurry to reach his destination. Eventually he arrived, and though the swarm was benign and mostly out of public view, Tony had alerted the Twentieth Precinct to its presence. Only he must have presented it to them with as much hysteria as if a terrified toddler had been spotted dangling from the limb of that tree. I counted fifteen officers at one point and at least half a dozen vehicles. This was unusual, and there was no need for all of the backup. Two of the officers initially tried to hustle us away from the bees, until they spotted our beekeeping regalia and we were accepted as part of the operation.

There is simply nothing about beekeeping that I enjoy more than capturing swarms.

Tony had also played his usual card and made some other calls—to the press. It was no accident that by the time he arrived in his vehicle there was a small swarm of reporters on the ground as close as they could get to the swarm in the tree. Still, there were not enough there to satisfy the Greek. Tony chatted with me, Molly, and Jon as we stood on the sidewalk waiting for him to begin the magic show.

“What are you waiting for?” I asked, grinning, knowing the answer. We all knew.

“Just a few more minutes.” He smiled like a Cheshire Cat and winked. Tony was wearing a T-shirt that he had specially made that had his Hotmail email address across the front so people could contact him. “It shows up in the photos!” Tony told us, tapping his finger to his own head and smirking, letting us know he had thought of everything.

About forty-five minutes after his arrival, the size of the press pool seemed to meet Tony’s satisfaction, and he ascended the short distance from the ground to the thin branch in a bucket truck.

Generally when I get wind of a swarm, I want to catch it myself. There is simply nothing about beekeeping that I enjoy more than capturing swarms. Particularly easy-to-grab swarms such as this one, which was drooping in one mass from the branch, not too high, easy to dislodge and carry off to a hive under bluer skies. Also, it is best to grab a swarm as quickly as possible. While they hang there, hundreds of scouts are out and about seeking a new home, and at any instant the swarm could come to a collective decision to depart. They might alight to a higher branch or move half a mile away. There’s no telling. So securing them as quickly as possible is important.

Molly, Jon, and I stood on the sidewalk and cracked jokes to one another as we watched Tony in action. The show—or showboating—commenced. First Tony, who wasn’t yet wearing a veil or gloves, leaned in to the swarm. He waited a moment to make sure that all of the many photographers were poised. Then he made his signature move of slowly plunging his bare hand into the thick of the swarm, an action that always produced a cacophony of oohs and aahs from the uninitiated, and some dramatic photos to boot. At this point his facial expression was stern and determined, as if he were trying hard to either void or retain his bowels.

To actually see a swarm in flight is a rare and awe-inspiring thing.

Tony routinely claimed to neophytes that the immersion of his hand into the swarm got the bees used to his scent so that he could better capture them without incident. For the beekeepers watching, the giggle factor gets pretty high when hearing this explanation, but it’s all supposed to be fun, so we don’t spoil the entertainment. Capturing swarms is, after all, a simple procedure, so why ruin the spectacle with a few facts?

There have been more swarms than I could ever recall in New York City. There are dozens every year. But to actually see a swarm in flight is a rare and awe-inspiring thing. Rudolf Steiner said, “If you now look at a swarm of bees, it is, to be sure, visible, but it really looks like the soul of a human being, a soul that is forced to leave its body.” And the Austrian esotericist was right. What he didn’t mention is that it can be as loud as a buzz saw, and the bees may spread out over several cubic meters of airborne space. As for capturing settled swarms, one rare day Detective Dan Higgins and I captured five in five hours—our personal record while working together. 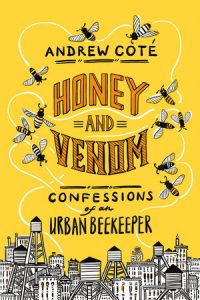 Excerpted from Honey and Venom: Confessions of an Urban Beekeeper by Andrew Coté. Copyright © 2020 by Andrew Coté. Excerpted by permission of Ballantine Books, an imprint of Penguin Random House LLC. All rights reserved. No part of this excerpt may be reproduced or reprinted without permission in writing from the publisher.

Andrew Coté, author of Honey and Venom, is New York City’s most well-known beekeeper. A fourth-generation apiarist, he is founder of the New York City Beekeepers Association, executive director of the nonprofit Bees Without Borders, polyglot, Fulbright scholar, black belt in aikido, and former college professor. Coté and his bees have been featured on The Martha Stewart Show, CNN, CBS, Cake Boss, Dr. Oz, Nightline, Good Morning America, and Today, and in The Wall Street Journal, The Atlantic, The New York Times, HuffPost, and many other news outlets around the world. Coté also runs Andrew’s Honey out of the NYC Union Square Greenmarket.

Reckoning with the Toll Gymnastics Takes on
Women's Lives 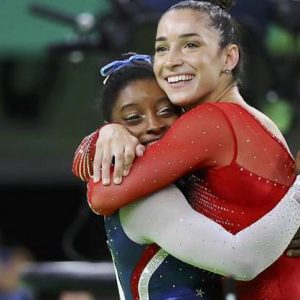 Reckoning with the Toll Gymnastics Takes on
Women's Lives

There’s a moment from the 2016 Olympics that I watched over and over again while writing Head Over Heels,...
© LitHub
Back to top
Loading Comments...