In Which Amy Poeppel Uses Some Very Bad Words

I recently binge-watched a show called The Good Place. It’s silly and profound, hilarious and heart-breaking—my favorite kind of entertainment. In the first episode the main character Eleanor (played by Kristin Bell) is told she’s dead and now inhabits “The Good Place” in the after-life. She also quickly discovers that bad words are not allowed to be spoken. So every time she tries to say “fuck,” it comes out as “fork,” “shit” becomes “shirt,” and in one especially funny moment, she yells, “Holy motherforking shirtballs!” The viewer knows exactly what she means to say, but it’s cleverly (and thinly) disguised in a way that’s acceptable for primetime television and in no way offensive. It makes perfect sense that Eleanor would curse. And yet she never actually curses at all. Genius.

Authors don’t have to worry about the FCC, so we can pepper as much bad language into our fiction as we want. I happen to believe that cursing usually adds color, humor, and oomph. And yes, sometimes it’s gratuitous and unnecessary. But do we care if we offend a reader here or there? I have certainly used my fair share of bad language in my writing (as well as in my daily conversations). But how much is too much? And is that even a question worth asking?

Apparently so. I recently received a respectful but very stern email from a reader. She told me she was a big fan of my first novel Small Admissions and that she recommended it to all of her friends. She rushed to the bookstore, she said, to buy my next novel Limelight. But having read it, she felt compelled to write and make sure I knew how very disappointed she was: The excessive use of swear words prevented her from enjoying the story. She was shocked, appalled, offended.

It’s easy to dismiss an email like this. But I couldn’t. In her rather long message, she made two comments in particular that have stuck with me and made me think.

“No one I know talks that way.”

This first comment was very confusing to me because, frankly, all the people I know swear a lot. My dad is 91 years old and swears. My son was only three when he came downstairs crying and said, “I fell my damn self out of bed.” I was so proud (he split a reflexive pronoun!) that I wrote it down. I live in New York City, and pretty much everyone I encounter cusses, both frequently and creatively. Just the other day I saw a woman in a subway station who couldn’t locate her Metrocard, and she was digging through her purse and shaking her head, and said, “Why am I such a cockwaffle?”—I understood her perfectly (and swiped her in). I love nothing more than a creative swear, especially one that packs a wallop for how unexpected it is: “assclown.” “douchenozzle.” Any adjective whatsoever (tired, cold, lazy, stupid, flu-ish, supercilious) “as fuck.”

What if I create a character who casually refers to herself as a cockwaffle?

The angry reader conceded that she kind of understood why one of my characters cussed so often: Carter is a celebrity popstar who didn’t receive much parental guidance in his childhood. As a result, he is rude and crude throughout the novel. But still, the reader told me, I should have cut back. She said she “got the point” after the first several times he uses the word “asshole” so why, she asked, did I have to hit her over the head with it? And did I also have to bombard her with “the f-word, the c-word, and the d-word????”

What, I wondered, was she so angry about? I hadn’t called her an asshole.

Bad words, when used to jazz up a sentence, don’t bother me, in fiction or in life. I don’t like being called names, of course, but that’s another story. If the woman in the subway had called me a cockwaffle, I might have had my feelings hurt. Or maybe not. Context is everything. But calling herself a cockwaffle? Well, that’s just funny. I wondered what makes some people react so negatively to profanity when it isn’t being directed at anyone or, if it is, it’s being directed at a character in a work of fiction. What if I create a character who casually refers to herself as a cockwaffle? Or to her husband? Why bother getting offended?

Maybe my brain and the angry reader’s brain are wired differently. Lucky for me, I’m married to a neuroscientist who has scanned my brain and tells me it’s a-okay, or as he put it, there are “no missing parts and no extra parts.” My frontal lobe, for example, does not seem to underlie some kind of pathological disinhibition. So that’s good. There are many studies, he told me, on the effects of swearing on the brain. I wasn’t in the mood to read them all, so he pointed me to a lecture in which Steve Pinker discusses the time Bono got on stage to accept a Golden Globe award on behalf of U2, and said, “This is really, really fucking brilliant,” setting off a firestorm across the country. The network wasn’t fined because the FCC determined that “fucking” was simply an expletive being used “to emphasize an exclamation.” This loophole infuriated conservative viewers and politicians, just as my language upset my reader. The politicians set out to change policy; my reader wrote me an angry email. I’m still struggling with what everyone is so worked up about. What’s wrong with an expletive being used for emphasis?

I work especially hard on my dialogue. My background is in acting, and I care about writing conversations that ring true. I always read my books out loud to myself and make endless adjustments. While writing Limelight, which admittedly is replete with offensive language, I acted out many of the popstar scenes with my twenty-two-year-old son until I was sure the dialogue sounded realistic and hit me the right way. But was I wrong? Could I have cut back? Should I have? Would my book have been better if I had deleted every other “asshole”? Should I try from now on to strike some kind of compromise between the way people I know talk and the way the people my reader knows talk? How seriously should I take the scolding of a self-described “Midwest conservative mother,” who told me that “NO teenager would EVER use the f-word”? Her email concerned me, not only because I’d offended her, but also because I know plenty of teenagers who use that word, including my own three kids. Now I felt like a terrible person and a terrible mother. Holy motherforking shirtballs, I thought, I’m going to The Bad Place.

And then I came to the second line. This one, I admit, hurt even more:

“I will never recommend Limelight to anyone.”

Ouch. Authors depend on word-of-mouth endorsements. When a friend says, “You have got to read this book,” I add it to my TBR pile. So naturally I find it unsettling to hear a reader vow that she will never recommend my book to any human being on the planet. I felt slightly panicked and wondered if I needed be more restrained. Clean up my act. Wash my mouth out with soap. Would I be willing to call my editor and take the word “assclown” out of my forthcoming novel? No, I wouldn’t. Is there anything I am willing to do to win back a disgusted reader?

I went on Goodreads recently and did this completely twisted thing I sometimes do: I think of some book I truly revere, and then I read the 1-star reviews. I find it fascinating, and—bonus—I always feel better about my own bad reviews when I read criticism of a book that I find flawless. This time I looked up a wonderful novel I’d just finished and found the following 1-star review: “I quit reading after chapter 4 because I don’t care to read the ‘f’ word consitently [sic] (it seemed to be at least once on every page).” And this one: “the sheer number of F-bombs was distracting.” And on and on and on: “the abundant use of the ‘F’ word was unnecessary.”

Well, forkity fork, I thought to myself when I finished the reader’s email.

I hadn’t even noticed that this author had used the word “fuck” often, so I was surprised. And I couldn’t believe that her use of a word (one that these reader-reviewers couldn’t even bring themselves to type) had prevented them from enjoying the brilliance of this book, characters who were so perfectly drawn, a family story that was so compelling. Wow, I thought, their fucking loss!

I like bad words. I can’t change that. And I certainly can’t go back and expurgate my already published prose. (And, speaking of bad words, how is it possible that the word “expurgate” doesn’t mean something filthy as fuck?) But I will always give my vocabulary proper consideration, like is “expurgate” really the best word to make my point here? Should I choose one that’s less pretentious? Does this word (or that phrase) work the very best, out of all the endless possibilities. In other words (pun intended), is there a better way to make my point?

Well, forkity fork, I thought to myself when I finished the reader’s email. And I answered her:

“Dear _______,” I wrote. “Thank you for your email. I’m so sorry to hear that Limelight disappointed you. I appreciate that you got in touch with me, and I respect your point of view. My third novel Musical Chairs is coming out this summer, and because of the cast of characters in this particular story, you’ll find there is not much swearing, other than the occasional use of colorful words, such as ‘assclown’ and ‘cockwaffle’ and an f-bomb or two, used for emphasis and humor. I hope you will give it a chance.”

I was grateful for her feedback; she cared enough to write. And while I may curse a lot, I’m not a monster. 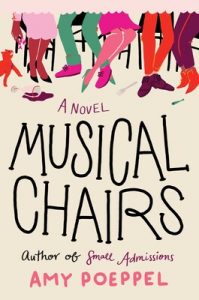 Musical Chairs by Amy Poeppel is available via Atria.

Amy Poeppel is the author of the novels Musical Chairs, Small Admissions and Limelight. Her writing has appeared in The New York Times, The Rumpus, Literary Hub, Working Mother, and The Belladonna. She and her husband have three sons and split their time between New York City, Germany, and the wilds of Connecticut. 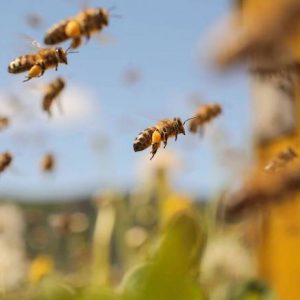 Being in the big city, working bees and selling honey, has been good to me. But every June, I receive regular alerts about...
© LitHub
Back to top
Loading Comments...