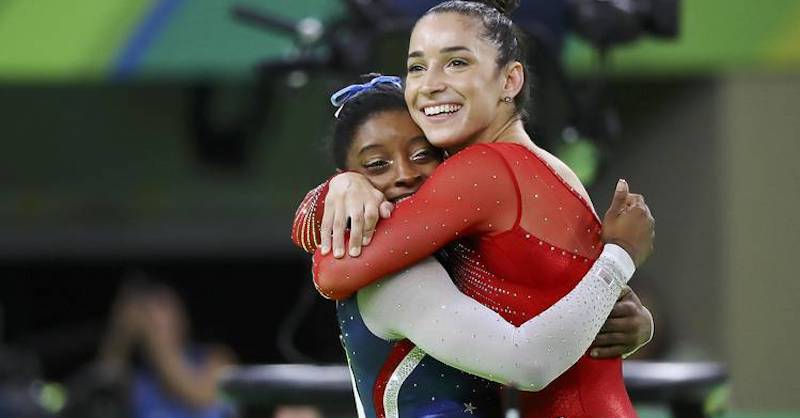 Reckoning with the Toll Gymnastics Takes on
Women’s Lives

Hannah Orenstein on the Future of USA Gymnastics

There’s a moment from the 2016 Olympics that I watched over and over again while writing Head Over Heels, a rom-com set in the world of elite gymnastics: Aly Raisman’s floor exercise during the all-around competition. As she completes her fourth and final tumbling pass—a round-off, back-handspring, double back pike—her face crumples. Breathing hard, she strikes the triumphant ending pose of her routine, then waves to the roaring stadium.

“The return to the Olympics has been worth it!” the announcer crows. Raisman breaks down in tears, doubles over, and mouths “thank you” to the audience. She drinks in the sight of the cheering crowd as she walks off the floor, then collapses into the waiting arms of her coach for a hug.

When I watched that routine in 2016, I saw her tears as a profoundly poignant image of triumph. Not only did she work hard enough to earn a spot on the fiercely competitive Olympic team, but she did it twice. In retrospect, I can’t help but see it amid a darker context. The first sexual assault allegations against Larry Nassar, the former USA Gymnastics national team doctor, became public a month later, and a year after that, Raisman disclosed that she had been abused by him, too.

I don’t know what was running through Raisman’s head during that moment on floor, but her powerful display of emotion stayed with me. Head Over Heels concludes with a scene inspired by what I imagine that moment might have felt like: a whirlwind of joy and pride, sacrifice and pain, and maybe even relief that it’s all over.

Like many things popular among girls and young women, gymnastics is criminally undervalued. The word “criminal” is not an exaggeration here: Nassar is currently serving at least 300 years in prison after more than 265 women—including four of the five members of the 2016 U.S. Olympic gymnastics team—accused him of sexual assault and molestation.

Earlier this year, the United States Olympic & Paralympic Committee proposed a $215 million settlement to current and former athletes who survived Nassar’s abuse, but gymnasts including Simone Biles and Aly Raisman have noted the settlement would prevent further investigation into USAG’s role in the scandal.

In addition, Bela and Marta Karolyi—the former head coaches of the United States’ women’s national gymnastics team—have shuttered their training center in Texas, the Karolyi Ranch, amid lawsuits alleging verbal, emotional, and physical abuse, as well as allowing “Nassar to have unfettered and secluded access to minor children,” a violation of USAG policy.

Just last month, USAG suspended coach Maggie Haney for eight years after allegations of verbal and emotional abuse. Her star athlete, Laurie Hernandez, told the New York Times Haney’s behavior was “so twisted that I thought it couldn’t be real.”

These abuses of power aren’t the sport’s only issue. Gymnasts are often placed in physical danger, ranging from the pressure to perform life-threatening stunts to the pressure to lose weight at any cost. In 1988, elite gymnast Julissa Gomez had a shaky track record practicing the dangerous Yurchenko vault. Under her coach Al Fong’s supervision, she reportedly felt she had to perform it, anyway.

As a result, she snapped her neck and died three years later at the age of 18. Another of Fong’s gymnasts, Christy Henrich, had a promising career that derailed after her coach and a judge allegedly criticized her weight (an accusation Fong has denied). She died of anorexia nervosa in 1994 at the age of 22. More recently, several gymnasts, including Shawn Johnson and Katelyn Ohashi, have spoken out against the sport’s culture of disordered eating.

These stories inspired my book, as did the 15 years I spent as a gymnast myself. I’m lucky to say that tumbling in gyms and competing at meets were some of the happiest experiences of my life. Gymnastics taught me the value of dedication and discipline, served as a creative outlet, and built my confidence. Whenever I mastered a new skill on beam or stuck a perfect landing, I felt superhuman. With Head Over Heels, I wanted to write a celebration of gymnastics that also interrogates the sport’s systematic failure of girls and young women.

The 2020 Olympics were supposed to be an opportunity for gymnasts to remind the world just how brightly they shine.

The result is the fictional story of Avery Abrams, a gymnast who trained under an abusive coach until her Olympic dreams were quashed by a devastating injury. Without gymnastics as her anchor, she struggles with depression and a loss of identity. Seven years later, reeling from a breakup, she returns to gymnastics to train Hallie, a spirited and sheltered young athlete, and finds sparks flying with a fellow coach. When a sexual abuse scandal breaks in the sport, it has shattering effects for them all.

While writing this book, I wanted to call attention to the myriad ways in which gymnasts suffer, but I also wanted Avery to take cues from the real-life heroes who are bravely speaking out against the trauma they endured—like the 156 women who testified against Nassar. Avery and her estranged best friend Jasmine, who is now married to their toxic former coach, both grapple with the sacrifices they made for their shot at success.

They defend the sport’s beauty while striving to make it a safer place for the next generation of athletes, including Hallie. They recognize the lack of agency they felt as minors and take steps to embrace their power as adults. The book is shot through with dark themes, but I hope it’s also infused with light.

Gymnastics desperately needs to enact reforms to ensure athletes can thrive in safe, healthy environments. The 2020 Olympics were supposed to be an opportunity for gymnasts to remind the world just how brightly they shine. Simone Biles, the most decorated gymnast in American history, was going to return for another sweep of the medal stand. New talent was going to vie for spots in Olympic history. Legions of little girls across the country were going to watch from their living rooms—just like I did and Raisman did—transfixed and inspired.

Instead, the Olympics have been postponed to the summer of 2021 (though it’s anybody’s guess as to whether it will be safe to hold the event then). This summer will feel strangely empty and sad. Head Over Heels was always meant to be a work of fiction, but now it takes place in an alternate universe—one in which the coronavirus pandemic did not happen, the Olympics went on as planned, and gymnasts deserving of justice could have their moment in the spotlight. 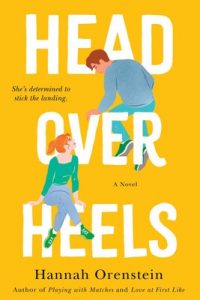 Hannah Orenstein is the author of Head Over Heels, Love at First Like, and Playing with Matches and is the senior dating editor at Elite Daily. Previously, she was a writer and editor at Seventeen.com. She lives in New York.

The Poet-Publisher Who Scorned Death by Pursuing It 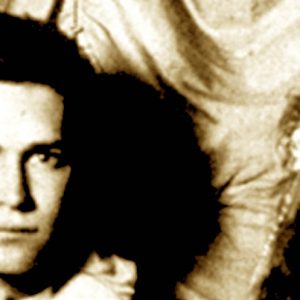 The Poet-Publisher Who Scorned Death by Pursuing It

It is sometimes said that poetry can kill a man, that, to the poet, poetry is a matter of life and death. Countless poets...
© LitHub
Back to top
Loading Comments...