Today we rode in the world’s most beautiful cab. A few minutes after we’d gotten in, the driver—middle-aged, and wearing glasses—passed us a notebook. Soojeong thought for a moment it was a Christian ambush, but the man explained that the book was where his clients wrote messages. While I was adding something, my wife found a second notebook, apparently much older. The first entry was from 2010. Fifteen minutes later we left the cab in Yeouido. Soojeong, who had been reading throughout the entire journey—she never does this as she suffers from car sickness—had tears in her eyes. She had read several messages, and even a short poem about the wind written by the cabdriver. It was a simple poem, pretty, not at all sentimental, she told me. But what impressed her most was that almost every one of the messages had an intimate, confessional tone. It was as if all those people had been waiting for that particular cab to unburden themselves. “I feel alone, my wife is hardly ever home, my son hates me.” “I’ve just come out of hospital. Apparently the diagnosis is more serious than I thought, I don’t know what’s going to happen now.” “On my way to see her for the second time. Very excited. I think she’s the best girl I’ve met in a long time.” “Our mother died today.” I guess it was life in a pure state, and for that reason my eyes also misted.

I once dated a woman who used to wake up in a bad mood because she had been wasting her time having dumb dreams. We argued about this a couple of times. I told her she couldn’t control what she dreamed, so there was no reason to be so enraged. No one dream is better than another. She knew this, but still went on complaining. Carl Jung said dreams aren’t completely personal; in fact, they are part of a great network. During deep, early-morning sleep, for two or three hours, we become tributaries of an interminable river, a universal dream. I woke this morning with the memory of a couple of ordinary, very common dreams. One included a speech by a Colombian politician. I lay there for quite a while, wondering why I had dreamed such a dream. It was uninspiring, and that made me feel ashamed, as if it was my duty to contribute to Jung’s communal experience with more intricate examples, like the one I had last winter, which had surprised me. It involved a town made of paper, and a thrilling escape from North Korea through a tunnel excavated in the floor of a beauty parlor.

We are invited to a birthday celebration in a bar in Gangnam. The place is decorated differently from other establishments in the area: ultramodern lighting, roomy sofas, designer lamps. Ours is a bar for office workers with decor dating back to sometime in the 90s. A lot of wood and wallpaper. I order a whisky. The bow-tied waiter brings me an amber-colored tumbler, and a separate glass with a perfect specimen of ice. It is a single chunk the size of a tennis ball, cut like a diamond. I am obsessed by its geometric form, its many facets. They must have a machine just for making perfect chunks of ice. I pour in the whisky, and the ice glimmers like a star. I get bored. The birthday girl—supposedly a fashion designer—has decided to use her birthday as a sort of hijacking to promote her brand. A clothes rack begins to do the rounds, pushed by a friend who modeled for the catalogue all the guests are handed at some point in the evening. The supposed designer has left her job in a bank and wants to earn a living selling garments. A story shared by thousands of young Koreans fed up with abusive bosses, unpaid overtime, weekends spent in the office, useless meetings in which all that matters is appearances. I get bored. Fortunately there is that marvelous piece of arctic ice.

There was a flyer posted on the door. They’re usually for fast-food delivery services. This one was different. I couldn’t decipher it. I put it on the kitchen table rather than crumpling and binning it. In the evening, when Soojeong came back from the academy, I showed it to her. She explained that it’s a kind of illegal loan scheme. With just one phone call you can immediately obtain a sum of money without a guarantor or any documentation. You just have to sign a piece of paper. It’s a pretty common service. I asked her about repayments. Anyone who falls behind is beaten up, or worse. Before we went to sleep, she told me there was even an old story related to those loans: the debtors are kidnapped and taken to one of the thousands of tiny islands south of the peninsula. There, the loan sharks sell them as slave labor to the owners of anchovy boats.

–Translated from the Spanish by Christina MacSweeney

Have We Always Been Depressed? 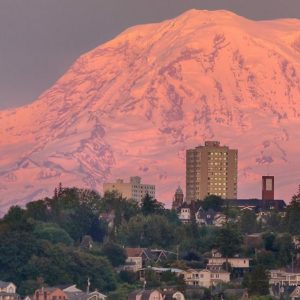 5 Reasons Why a Writer Should Move to Tacoma As costs of living in Seattle and San Francisco continue to rise, the relative affordability and vibrant arts culture of Tacoma...
© LitHub
Back to top
Loading Comments...