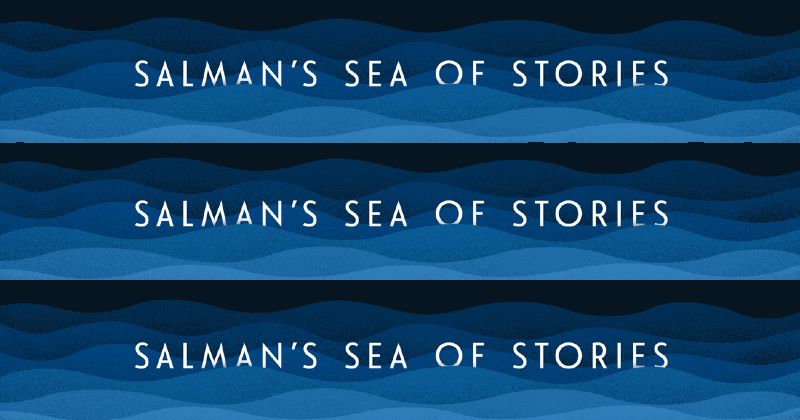 Salman Rushdie’s next work of fiction will be published on his new Substack.

Acclaimed writers have been migrating to Substack in droves—and the latest to do so is Salman Rushdie. Rushdie will host his new work—including reviews, personal essays, and new, original fiction—on his Substack, Salman’s Sea of Stories.

Some posts will be available for free; paid subscribers will receive access to more fiction and nonfiction.

Here’s Rushdie’s own introduction to his Substack, in full:

Here is one of the stories my father liked to tell his friends: “Salman was born on June 19th, 1947, and exactly eight weeks later, to the day, the British ran away.” Ha ha, right? I guess it was funny the first time I heard it, less funny the one hundred and first time. But it always went down well with his audiences. It was his favorite joke.

And here’s a true story: at the bottom of the hill where we lived, in the Breach Candy neighborhood of Bombay (now Mumbai), there was a private swimming club. The Breach Candy Swimming Bath Trust. I could look down into it from my bedroom window.

This didn’t go down well in newly independent India but the club was resistant to change. Finally it gave an inch: it said that if a white member wished to bring in a brown guest, that brown person would be admitted. As it happened, I had a white school friend, and he invited me to go to the club for a swim. What burst out of me then was perhaps my first ever political statement.

Since then, I’ve spent a lot of my life swimming in stories (and telling a few, too). And one of the things I’ve learned is that stories give birth to other stories.

My father’s joke, a long time after even he had stopped telling it, made me think: “What if there wasn’t an eight-week gap? What if somebody was born at the exact same moment as his country? What sort of story might that be?”

And my Breach Candy moment answered that question. It wouldn’t be a story that the British gave us permission to tell. It would refuse the colonial past, and talk about freedom.

So out of those two stories came a story of my own. It was called Midnight’s Children.

In another book of mine, Haroun and the Sea of Stories, the boy hero is taken by a Water Genie to an actual Ocean of Stories. It was made up of a thousand thousand thousand and one different story streams, weaving in and out of one another. “And because the stories were held here in liquid form, they retained the ability to change, to join up with other stories and so become yet other stories.”

I’d like it if my Substack could work like that. I’d like it to talk about all sorts of stories, stories that have touched or moved or impressed or bored or even revolted me, in books and movies and on TV and in theaters, as well as stories I just plain made up.

A lot of that will be on here for free. Some of it won’t be. If you decide to become a paid subscriber you’ll be able to read more of my made-up stories, as well as personal stories, the stories behind the stories I’ll be telling, and sometimes I’ll ask you questions, too, and we can have a conversation about it all.

The point of doing this is to have a closer relationship with readers, to speak freely, without any intermediaries or gatekeepers. There’s just us here, just you and me, and we can take this wherever it goes. I hope you’ll enjoy the ride. I’ll try to make it fun.