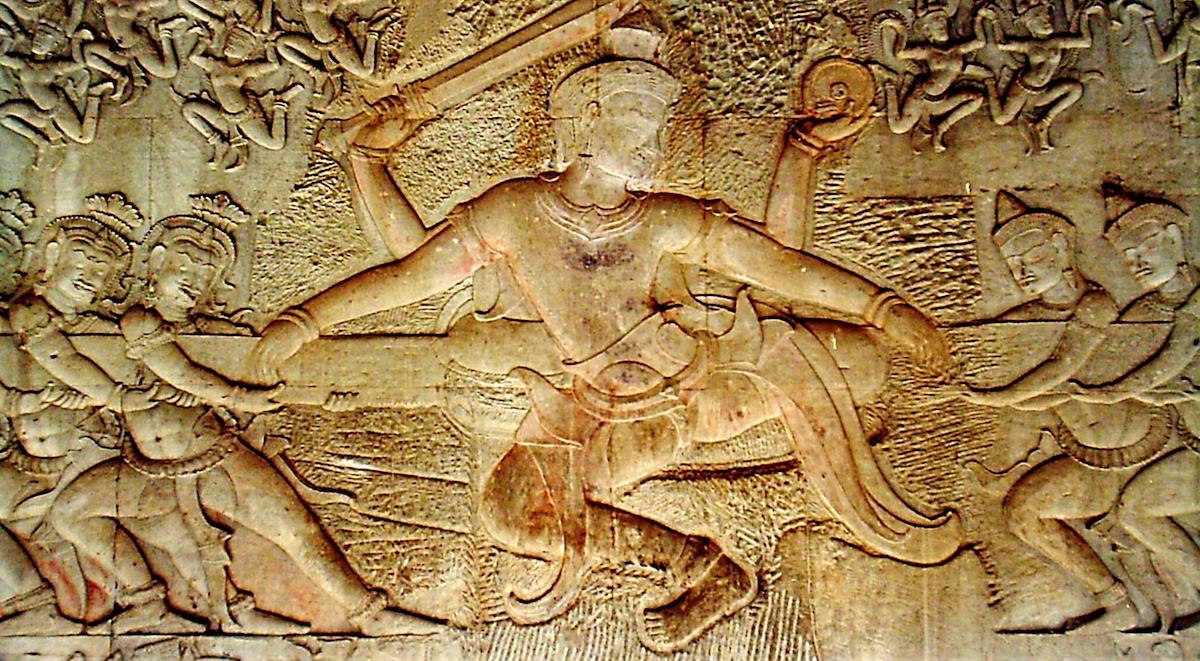 Karen Armstrong on Early Aryans and the Rig Veda

In about 1500 BCE, small bands of pastoralists left the Caucasian steppes and began to travel southwards through Afghanistan, settling finally in the Punjab in what is now Pakistan. This migration was neither a mass movement nor a military invasion but probably a continuous infiltration of various Aryan groups over centuries. Other Aryans had already roamed further afield—to Greece, Italy, Scandinavia and Germany—taking their language and mythology with them. The Aryans were not a distinct ethnic group but a loose-knit confederation of tribes who shared a common culture and a language now known as “Indo-European” because it became the basis of several European and Asiatic tongues. The Aryan settlers in the Punjab already spoke an early form of Sanskrit, the sacred language of one of the world’s earliest scriptures.

About 300 years later, a priestly elite began to compile the massive anthology of Sanskrit hymns that would become the Rig Veda (“Knowledge in Verse”), the most prestigious text in the vast corpus of Indian scripture known as Veda (“knowledge”). The earliest of these hymns had been disclosed to seven great rishis (“seers”) in the remote past and transmitted with impeccable accuracy by their descendants. In seven priestly families, each generation had memorized the hymns of their inspired ancestor and passed them on orally to their children. Even today, when their ancient Sanskrit is well-nigh incomprehensible, these hymns are still recited with the precise tonal accents and inflections of the original, together with ritually prescribed gestures of the arms and fingers.

Sound had always been sacred to the Aryans—it was far more important to them than the meaning of these hymns—so when they intoned and memorized them, the priests felt possessed by a sacred presence. The idea that the sound of a sacred text could be more important than the truths it conveys immediately challenges our modern notion of “scripture,” which, of course, implies a written text. But writing was unknown in India and, when it finally arrived in about 700 BCE, it was regarded as corrupt and polluting. One late-Vedic text ruled: “A pupil should not recite the Veda after he has eaten meat, seen blood, had intercourse, or engaged in writing.”

Like “graven images” in Josiah’s Israel, writing was regarded as a degrading and dangerous vehicle for the divine. Hence, even after the advent of writing, Vedic hymns continued to be learned by heart and transmitted orally. When the Europeans arrived in India during the 18th and 19th centuries, they wondered whether the Veda truly existed, because nobody could produce a copy. The Brahmin priests told them firmly: “Veda is what pertains to religion; it is not in books.”

In the West today, we tend to regard scripture as the Last Word, a canon sealed for all time, sacred, immutable and inviolable. But, as we have already seen, in the premodern world, scripture was always a work in progress. Ancient writings were revered but not fossilized; scriptures had to speak to ever-changing circumstances and, in the process, they were often radically transformed. This was certainly true of the Rig Veda. The earliest collections, known as the “Family Books,” are found in books Two to Seven in the extant Rig Veda; books Eight and Nine were composed by another generation of poet-priests and given the same status as the hymns of the seven original rishis, while the hymns in books One and Ten, created by rishis with a very different vision, were added later still. The American scholar Brian K. Smith has described the Veda as “a peculiar kind of canon . . . endlessly re-envisaged, and eternally unchanged.”

In the West today, we tend to regard scripture as the Last Word, a canon sealed for all time, sacred, immutable and inviolable. But in the premodern world, scripture was always a work in progress.

The Aryans seem unlikely producers of a holy scripture, since their lives were not what we would call devout. They made a living by stealing the cattle of rival Aryan tribes and looting the settlements of the indigenous peoples, whom they contemptuously called dasas (“barbarians”). They saw nothing reprehensible in this: in their eyes, it was the only acceptable way for a noble” (arya) man to obtain goods—an attitude they shared with the aristocrats of agrarian civilizations who forcibly seized their peasants’ produce. Aryans felt fully alive only when marauding and fighting. They were not peace-loving yogins but rough, hard-drinking cowboys, relentlessly pushing eastward in search of more cattle and new pastures.

The Rig Veda celebrates this ethos. The hero of its earliest hymns was Indra, god of war and sworn enemy of the monstrous dragon Vritra, who symbolized everything that thwarted Aryan migration: his name was derived from “VR,” an Indo-European root that meant “to obstruct, enclose, encircle.” The Aryans imagined Vritra as a huge snake, which at the beginning of time was coiled around the cosmic mountain so tightly that its life-giving waters could not escape and the earth was parched with drought. Indra made the world habitable by hurling his glittering thunderbolt at Vritra and then decapitating him. This violent myth spoke directly to the Aryans’ predicament. They too felt compelled to fight their way through a ring of hostile enemies that seemed to box them in, thwarting their advance and preventing them from seizing the cattle, horses and food they needed for survival.

Every scriptural tradition has a central theme or motif, which reflects its unique view of the human predicament. We shall see that a yearning for liberation (moksha) became entrenched in the Indian imagination: long after Vritra was all but forgotten, the people of India continued to feel cruelly trapped in the deadly impasse of their mortal condition. The opposite of moksha was amhas (“captivity”), an Indo-European word cognate with the English “anxiety” and the German Angst, which evokes a profound unease and claustrophobic distress. Later generations developed meditative and ethical disciplines to help them transcend life’s fateful coils; the early Aryans could only fight their way out.

The rishis took part in the raiding and contributed to each battle with gusto; we should not imagine them remaining piously on the sidelines. In their hymns, these poet-priests depict themselves riding into the fray beside Indra, and claimed that it was their ritualized chant that had empowered Indra to smash the mountain cave in which Vala, another demon, had imprisoned the sun and the cattle, depriving the earth of light, warmth and food. Other hymns describe Indra’s cohorts, the Maruts, strengthening Indra in battle with the sound of their hymns, which not only supported Indra but could vanquish all other obstacles. These poems were, therefore, deemed essential to the technology of warfare, the pastoral economy, the well being of warriors and the survival of the Aryan people. Later Indian scriptures would develop a doctrine of ahimsa (“non-violence”), but at this point, the rishis’ inspired words had lethal potential for the Aryans’ enemies when they were intoned correctly.

If you had asked the Aryans whether these fierce cosmic battles had really happened or what evidence there was for the existence of Indra or Vritra, they would have struggled to understand the question. Indra, Vritra and Vala belong to the realm of mythos—the language of scripture—which looks back to primordial time to discover what is constant and essential to human life. For the beleaguered Aryans, Vritra and Vala were neither fantastic nor historical figures because they embodied an ever-present reality—the deadly, remorseless conflict that lay at the heart of existence. They saw Vritra and Vala in the dasas surrounding their encampments. They knew that animals preyed continuously on one another in a ceaseless struggle for survival. Terrifying storms, earthquakes and drought endangered all living things. Every evening, the sun was obliterated by the forces of darkness, but somehow—wondrously—it always managed to rise again the following morning.

The Aryans seem unlikely producers of a holy scripture, since their lives were not what we would call devout. They made a living by stealing the cattle of rival Aryan tribes and looting settlements of indigenous peoples.

This was a community that felt constantly imperiled. Even the names of the Aryans’ more peaceable gods—Mitra (“compact,” “alliance”) and Varuna (“covering,” “binding together”)—not only sacralized the loyalty that held the tribes together but also presupposed an omnipresent foe. Perpetually under threat, the Aryans projected their embattled situation onto the cosmos, where their own gods, the devas, were thought to be engaged in a constant battle with the asuras, older, primordial deities who had become demonic. Some hymns describe malign spirits roaming outside their encampments at night. Others dwell on the ever-present specter of famine and disease. As Vedic thought progressed, it seemed that there could be no lasting transformation without prior danger and disintegration—that Vritra must first prevail before Varuna could bring peace and order. Vedic mythology spoke of a primal unity broken into multiple parts: of a cosmos formed from a god’s dismembered body; and of the divine Word falling from heaven and fragmenting into multiple syllables, which the rishis strove to put together again.

Unlike other animals, human beings cannot take the world for granted. The Aryans relied on mythos to make sense of their lives, but they also used practical logos to improve their circumstances. Raids had to be planned, fighting skills improved and the pastoral economy skillfully managed to ensure the welfare of the group. But like all warriors, they told themselves that their expeditions were setting the world to rights. Aryan mythology did not conflict with these logos-driven activities; rather, it embraced and enhanced them. Before a raid, priests chanted a hymn celebrating Indra’s victories and, as Indra had done before his battles, the raiders all drank a draught of the hallucinogenic drug soma as they harnessed their horses to the war chariots. The numinous chanting of the Rig Veda gave dignity and significance to a way of life that could otherwise have seemed brutal, pointless and terrifying.

And it paid off. By the 10th-century BCE, the Aryans were pushing steadily eastward and had settled in the Doab between the Yamuna and Ganges rivers—a region henceforth known as Arya Varta (“Land of the Arya”). Each year, during the cool season, teams of warriors were dispatched to subdue the locals and create a new settlement a little further east, and new rituals were devised to sanctify this incremental progress. Another deva, Agni, god of fire, now became the Aryans’ hero, because the pioneers had to clear land for their encampments by setting fire to the dense forests. For the Aryans, the devas were not “other” beings, but were experienced as a sacred dimension of themselves. Agni not only symbolized the settler’s ability to conquer and control his new environment but was also his alter ego, his best and deepest “self” (atman), which was also sacred and divine. 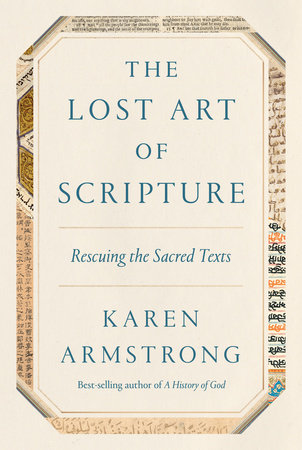 Excerpted from The Lost Art of Scripture: Rescuing the Sacred Texts by Karen Armstrong. Copyright © Karen Armstrong, 2019. Reprinted with permission from Knopf.

Karen Armstrong is the author of numerous books on religious affairs, including The Case for God, The Lost Art of Scripture, A History of God, The Battle for God, Holy War, Islam, Buddha,and The Great Transformation, as well as a memoir, The Spiral Staircase. Her work has been translated into 45 languages. In 2008, she was awarded the TED Prize and began working with TED on the Charter for Compassion, created online by the general public, and crafted by leading thinkers in Judaism, Christianity, Islam, Hinduism, Buddhism, and Confucianism. She is currently an ambassador for the United Nations Alliance of Civilizations. 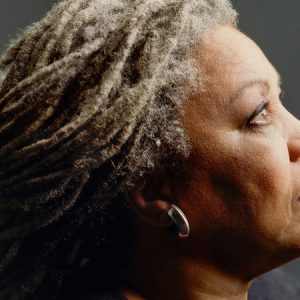 Through bricolage—construction or creation from a diverse range of available things—The Measure of Our Lives aims to limn...
© LitHub
Back to top