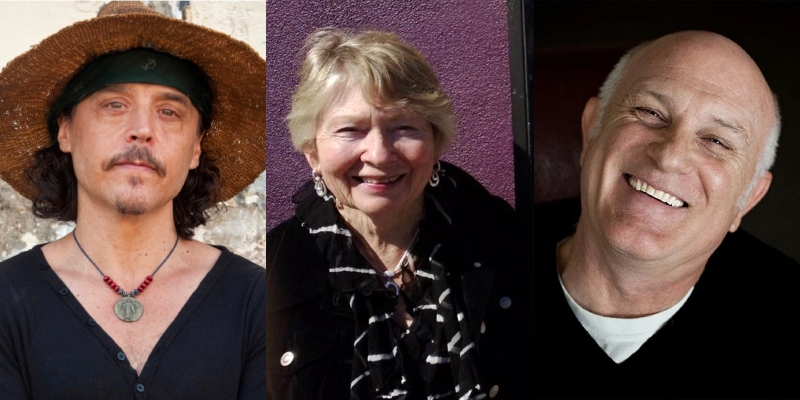 Rich Ferguson, Mary Kerr, and S.A. Griffin are the guests for a roundtable discussion of Beat literature and the new anthology Beat Not Beat: An Anthology of California Poets Screwing on the Beat and Post-Beat Tradition (Moon Tide Press).

Brad Listi: You talk about Bukowski as a seminal California writer, certainly an LA writer, and how his influence on the Beats and the poets who came after him is immense. I mean, you can’t deny that. But I think the reverse is true. I have to believe that Beat culture and the poetry and the work of Beat writers had some influence on Bukowski and his sensibility in the time that he was coming from.

S.A. Griffin: Well yeah, of course it had to. He talks about meeting Ginsberg and calling him names and stuff. I forget the poem, but it’s a great poem. My friend Scott Wannberg who passed away wrote a great piece where he talks about the meeting of Ginsberg and Bukowski, and Bukowski met Neal Cassady. He says, “Kerouac, I rode with your boy Neal today.” I think it’s called “The Toreador,” where they’re driving around Los Angeles, and Bukowski’s getting the shit scared out of them because Neal was the great driver.

I mean, Neal Cassady is somebody you could talk about for a long time. He’s at the center of most Beat culture. Ginsberg, Kerouac, a lot of them. He really is the Paul Bunyan figure in 20th-century America that really is misunderstood. He drove his way through not just Beat culture but the hippie culture as well. A lot of the Beats became hippies. They were Beats first and became hippies. And Neal Cassady, who never really became a full-fledged hippie with long hair and shit, he drove the Pranksters. He brought acid to the world.

Brad Listi: That’s a very good point, because he wasn’t necessarily the kind of writer that Kerouac became or that Ginsberg was.

S.A. Griffin: No, but Cassady is at the core of what’s called Beat literature. Without the famous letter that Cassady wrote to Ginsberg, which he shared with Kerouac—that revolutionized all their ideas about writing, Ginsberg and Kerouac.

Brad Listi: He was kind of like a spiritual figure. And it’s amazing to me when you read about Beat cultural history, or you read about the Pranksters and the hippies, when you read about the Haight-Ashbury scene and the music that came out of that scene in the 60s and 70s, Cassady’s all over that. Everybody who interacted with him seemed to come away moved. My understanding of him is just through what’s been written about him, and then there’s these video clips of him jabbering. It’s hard to make sense of him. He’s hard to follow, I don’t know if you’ve seen those old Prankster filmstrips.

S.A. Griffin: I have all of them. It’s called The Joan Anderson Letter, and it revolutionized the way Kerouac wrote. It also changed the way Ginsberg viewed all of it, too. It’s seminal. It was published recently in book form.

Pushcart Prize-nominated poet Rich Ferguson has shared the stage with Patti Smith, Wanda Coleman, Moby, and other esteemed poets and musicians. Ferguson was selected by the National Beat Poetry Foundation, Inc. (NBPF), to serve as the State of California Beat Poet Laureate (Sept. 2020 to Sept. 2022). He is a featured performer in the film, What About Me? featuring Michael Stipe, Michael Franti, k.d. lang, and others. His poetry and award-winning spoken-word music videos have appeared in numerous anthologies and festivals, and he was a winner in Opium Magazine’s Literary Death Match, L.A. Ferguson is the editor of an anthology of CA poets entitled Beat Not Beat (Moon Tide Press).

Mary Kerr is an Independent Producer of documentaries on the California Beat Era. Her films include The Beach (1996), Venice West and the LA Scene (2011), and San Francisco’s Wild History Groove (2011).

S.A. Griffin, co-editor of Beat Not Beat and The Outlaw Bible of American Poetry (Firecracker Award) and Carma Bum progenitor lives, loves and works in Los Angeles. In 2010 he created The Poetry Bomb, a former Vietnam era practice bomb converted into an art object filled with over 900 poems from around the world in an effort to inspire civil disagreements culminating in The Poetry Bomb Couch Surfing Across America Tour of Words. Named Best Performance Poet by the LA Weekly, in 2011 he was the first recipient of Beyond Baroque’s Distinguished Service Award. His most recent book, Pandemic Soul Music (Punk Hostage Press), will be on bookshelves December 2022. Husband, father and USAF Vietnam era veteran. 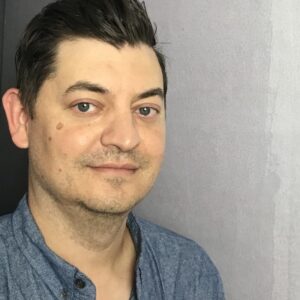 Kevin Wilson zooms in from his mountain to discuss his thrilling new novel, Now is Not the Time to Panic, and that means...
© LitHub
Back to top