A Literary Detective Story from the Translator of The Red Sphinx

I’d been a fan of Alexandre Dumas’s Musketeers novels since Richard Lester’s 1973 film of The Three Musketeers had sent me looking for the source material, but it wasn’t until around 2000, when I was sketching out a novel set in the same period, that I really started digging into The Three Musketeers (1844) and its sequels. Dissatisfied with the available English translations, I turned to the original French versions and was delighted with what I found—Dumas was a strikingly modern writer for his time, with dynamic prose and crackling dialogue that was all too often stilted and stiffened when rendered into English by his 19th-century translators.

In my research I came across several references to a later novel by Dumas set in the same period, a story called The Count of Moret, or sometimes The Red Sphinx. Intrigued, I tried to find a copy, but had no luck. It seemed the tale had originally appeared in newspaper serial form from 1865 to ’66, but Dumas had never finished it, and it didn’t receive book publication in France until 1946, after a copy of the original manuscript in Dumas’s unmistakable handwriting turned up in a French attic. On a trip to Paris, I found a copy in a used book store and devoured it—the tale was vintage Dumas, picking up right where The Three Musketeers left off, but from the point of view of their worthy opponent Cardinal Richelieu and of the Comte de Moret, King Louis’s daring young half-brother.

But after 74 chapters of Dumas’s hallmark adventure, romance, and intrigue, the story just stopped, unfinished. This was frustrating and not at all satisfactory—I wanted to know why and how. I dug deeper.

And I learned a few things. For one, the newspaper in which the story was being serialized had hit hard times in 1866 and suddenly ceased publication. Furthermore Dumas, by then aged 64, was ailing and having difficulty providing weekly chapters about young Moret and his lady-love, Isabelle de Lautrec.

And to my surprise, I learned something else as well: The Red Sphinx wasn’t the first story Dumas had written about Moret and Isabelle! Fifteen years earlier he’d written a novella called The Dove that relates the climax of their great love affair, concluding it with a satisfyingly dramatic finale. And there it was: the final piece of the puzzle as to why Dumas had never completed The Red Sphinx—he’d already written an ending for those characters a decade and a half earlier. Why revisit it? For him, the story was over.

But not for us! I’d found the ending to the master’s next-to-last novel and decided then and there I would put the two together for a first-ever full English translation. This took several years—as an author, Dumas had many fine qualities, but brevity wasn’t among them, and The Red Sphinx is no short book. However, once I got used to the rolling rhythm of his writing, translating Dumas’s prose into contemporary English was a lot of fun. The man was a playwright before he was a novelist, and it shows: the book is a series of bold scenes enacted by vivid characters, all scheming and striving in the shadow of the towering figure of Cardinal Richelieu. Nobody loved his own characters more than Dumas, and they’re brimming with life, leaping right off the page even a century and a half later.

The tale picks up right after the end of The Three Musketeers and is a true sequel to that groundbreaking novel in all ways but one: d’Artagnan and his titular chums—the musketeers Athos, Porthos, and Aramis—are nowhere to be seen. This mystery also has a solution: Dumas’s editor had asked for another sequel to The Three Musketeers, and Dumas agreed to oblige him—but having already written over a million words about d’Artagnan and his friends, he’d said everything he had to say about them and declined to include them in The Red Sphinx. I promise you, you won’t miss them, as the novel is entirely successful on its own merits. It’s a corker. And now, finished at last, The Red Sphinx feels right at home on the shelf next to The Three Musketeers, Twenty Years After, and The Man in the Iron Mask.

Lawrence Ellsworth is a member of Washington Independent Writers and the Historical Novel Society, and attended the American HNS Conferences in 2005 and 2007. He has written scripts for comic books, has worked in radio and narrative voiceovers, and is an experienced public speaker. He has three children, Wyatt, Sanderson, and Honor, and lives in northern Maryland near Baltimore. 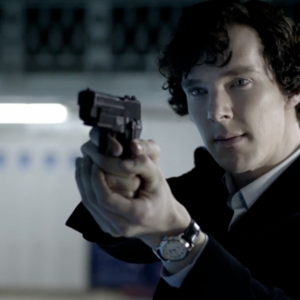 This week, The Guardian ran a review of the new season of the BBC's Sherlock, written by Ralph Jones and entitled "Sherlock...
© LitHub
Back to top