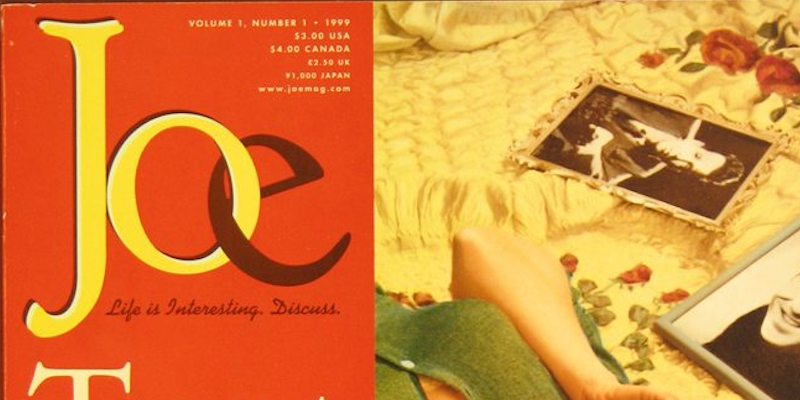 Recently, while editing Nicole Miller’s excellent essay on Joy Williams’ cosmic waiting rooms, I learned a bit of trivia: in 1999, Starbuck’s launched a quarterly literary magazine called Joe. Though the fact of the magazine’s existence (and roster of writers) was enough to delight me, its contemporary relevance was also of interest, as the story of Joe sounds similar to the more recent Netflix Tudum saga (though to be fair to Joe, it lasted slightly longer).

The magazine—which bore the truly uninteresting tagline “Life is interesting. Discuss.”—featured work from literary heavies including Williams (an essay that “ponders what the Unabomber’s cabin thinks about while its maker is in prison”) as well as James Salter (?!), Chang-rae Lee, Lydia Davis, Douglas Coupland (an illustrated diagram of an office cubical titled “Welcome to the Electronic Coffin”), Andrew Solomon, and Mark Leyner. It published short fiction, cultural commentary, and ads for 90s treasures like Nokia phones and Starbucks compilation CDs.

Of course, this was all happening when Starbucks, like Barnes & Noble, was one of the ultimate symbols of the evil corporate behemoth crushing small businesses (which seems almost quaint now), so the idea that the company would try to up its cultural cred with a literary magazine rubbed plenty of people the wrong way.

In a 1999 article in Wired about the backlash, writer and editor Bart Schneider describes Joe as “middlebrow. It’s not going to tax you too much. This is just product delivery. It doesn’t have any editorial center or heart.” But the article also includes quotes from Coupland and Leyner which sound eerily contemporary:

“There’s people that like to bitch all the time about the decline of culture, but it’s so tedious,” Leyner said. “The idea that there are any publications that are somehow completely pure and devoid of any contentiousness is naive. The people who are getting sanctimonious probably have too much time on their hands.”

“People love trashing new mags,” said Coupland. “It’s like some kind of law. But I don’t think [Joe] merits a beating. It’s also running fiction which most magazine editors out there [in New York] consider the kiss of death. So, good for them.”

Of course, the most contemporary thing about Joe is that Starbucks pulled the plug on it after three issues.