Among the withering incriminations in Joy Williams’s Ill Nature: Rants and Reflections on Humanity and Other Animals, there’s an odd essay called “Cabin Cabin.” The author ponders what the Unabomber’s cabin thinks about while its maker is in prison. She conjures the cabin’s inner life—all 10×12 square feet of it—and its wry voice, its long-distance dilemma: the man stalled in a Colorado prison while his home, wrested from the Montana woods, sits in a hangar in Sacramento. There, according to Williams, the cabin thinks of Shakespeare, along with Thoreau’s “farting pond” and Ted Kaczynski’s ballistic conviction that people are destroying themselves and the Earth.

The premise of the piece might sound silly, like a capsule of animated, late 90s kitsch (it first appeared in a short-lived lit mag put out by Starbucks called Joe). But for readers who know Williams’s bracing ecocriticism and her uncanny visions of humanity, “Cabin Cabin” suggests one of the writer’s defining preoccupations: rooms. In Williams’s stories and novels, including The Quick and the Dead, a 2001 Pulitzer Prize finalist, and Harrow, published last year to great acclaim, the room is not merely setting nor backdrop; it gives spatial dimension to the writer’s spiritual imagination.

Take Williams’s short story “The Blue Men,” published in 1986. “May and Bomber were trying out their life together in a new town,” the story goes. May, the mother of a man executed by the state of Florida, and her grandson Bomber rent out rooms to tourists. “May liked to listen to the voices in the rooms, but as a rule her tourists didn’t say much. Actually, she strained to hear at times.” May is no voyeur, but she acts with the stealth of someone trying to lure a great mystery into the open. Once, in the hallway outside the rooms—one painted yellow, the other rose—she thinks she hears the words spoken by her husband before he died: “That doctor is so stuck on himself…the same words as Harold’s very last ones.”

The sound is hard to pin down. Is it the voice of the room’s occupant or something else? The rest of the story concerns Bomber’s new friend, a punky-looking girl named Edith; a stack of postcards mailed by May’s son from Morocco; a purse, stolen then returned; an enigmatic car crash: “None of them were injured and at first they denied that anything unusual had happened at all.” The details are so Joy Williams—Masonic youths; a condemned man, his death dispatched briskly; a disaster that’s never quite consummated. After her son’s death, May persists in a strange, unresolved state, as if wandering a desert like the one in the postcards where it never grows dark.

When Bomber’s friend Edith asks to move into the yellow room, May is suddenly filled with dread. “She was frightened and this surprised her, for she could scarcely believe she could know fright again after what happened to them, but there it was, some thing beyond the worst thing—some disconnection, some demand.” Some thing beyond. This phrase has a faintly theological ring to it. But what does it have to do with the rooms—the yellow and the rose? These chambers remain out of view, their weak transmissions suggesting a realm beyond our grasp.

Williams’ work is haunted by the beyond. It animates the built world—the gas stations, rest stops, hotels, museums, crumbling Victorians, strip malls, and institutional wards that occupy her stories and novels. These rooms delineate a porous boundary between being and non-being—a border that the writer monitors closely.

Williams’ work is haunted by the beyond. It animates the built world—the gas stations, rest stops, hotels, museums, crumbling Victorians, strip malls, and institutional wards that occupy her stories and novels.

Her more recent story, “Chaunt,” published in the New Yorker in 2018, concerns another mother, another dead son, a purgatorial residence called the Dove. “It was eleven stories with a multitude of single rooms, very much like a dovecote, or, as everyone eventually suggested, a columbarium.” Here is where the mother, Jane Click, waits out her remaining days. (Jane Click! The name takes a real nosedive: two stressed syllables—the first, leaping off the long vertical vowel to the flat smack of the second—a spondee.)

At the Dove, teenagers with shaved heads and missing eyebrows lead some sort of group therapy sessions. Williams seems to relish these scenes, full of non-sequiturs and dim disclosure, a congregational lawlessness. Here, someone named Theodore appears, strange and unkempt, a philosopher, apparently—one of Williams’s holy fools: “For beyond the stars’ pavilions God shall compensate your grief.”

Theodore’s gnomic pronouncement falls flat. The distant architecture of atonement contrasts with another image: a ruined chapel in a ghost town called Chaunt, where Jane Click’s young son and his friend used to ride their bikes. There, according to the boys, they found an abandoned church full of animals. “‘When you’re there, you know that something is going to happen any moment and you wait with them so you can be there when it happens,’ Billy said. ‘You haven’t been invited to stay but you’re welcome to stay. It’s just about to happen.’”

After the boys are struck and killed by a passing motorist, Jane Click moves to the Dove and begins visiting Chaunt in her dreams. At night, she enters the mysterious room where the animals, motionless, seem to wait for some hushed, climactic event. “She never felt closer to her son or his gentle friend there; she felt closer to the mute enormity of this other absence. It was a place not of solace but of correspondence, a correspondence that might never occur.”

Like the rooms of murmuring tourists, where May strains to hear something just out of range, this sanctuary suggests the distortions and estrangements of grief; and not grief only, but its double—a longing toward some veiled horizon that can only be called eschatological. “Soon, something would enter, fearsomely, abruptly, like a judge from the robing room.”

Here and throughout Williams’s work, the language of cosmic judgment coincides with ecological crisis—mountains empty of life, an “exhausted” valley, “a slow and steady profaning of our species,” as one of the Dove’s residents observes. These aren’t just metaphors, but a grim diagnosis of a degraded earth.

Williams’s cataclysmic vision finds an epic mode in her recent novel Harrow. This is a world of dying trees, space junk, industrial giants, “oil-soaked birds” and “billions of plastic bags translated in magical symbiosis into ethically responsible leisure equipment.” We follow a girl named Khristen (pronounced, maybe, “christen”) from New England to a boarding school out west, then on a meandering journey in search of her mother. Khristen’s cross-country exodus reflects widespread displacement across a landscape that’s smitten, in the Old Testament jargon, with environmental and social collapse. “The land was bright with raging fires ringed by sportsmen shooting the crazed creatures trying to escape the flames.”

Khristen makes her way to the Institute, a crumbling resort on the edge of a foul lake that the residents call Big Girl. The Institute, like the Dove, occupies a sort of deviant zone, a place outside the ordinary run of things. In this heterotopia, terminally-ill residents plot suicide missions targeting corporate villains (a template not far off from that of Kaczynski). Here, Khristen meets Jeffrey, a precocious 10-year-old who speaks in fragments of legalese.

Beyond the stars’ pavilions, there is no place where the turning spheres resolve themselves with a satisfying sound.

Jeffrey is the one who introduces Khristen, later in the book, to Kafka’s short story, “The Hunter Gracchus.” (Gracchus with a silent H, like Khristen; H for Harrow; H, a letter that may derive from an ancient symbol for fence or enclosure.) Gracchus is a figure of no-place, his death incomplete, who must wander the earth neither dead nor alive. Khristen, too, survived a brief death as an infant, or so her mother believes. “My mother was convinced that I had been somewhere, in some frightful chaos of non-being that nevertheless contained an observable yet incomprehensible future to which we would all be subjected.” Khristen can only imagine that dim place—death’s “robing room,” as she puts it, recalling the image of the church in Chaunt, the hushed, expectant animals.

“The notion of a foundational in-between, of existence itself as a fleeting or fugacious form, has been central to her work from the very beginning,” writes Justin Taylor in his review of Harrow for Bookforum. “The writer Vincent Scarpa, who has studied and taught Williams’s work extensively, put it to me this way: ‘That liminal state between being alive and being dead—that’s Joy’s playground.’”

And yet, Williams also seems interested in how the one remains cut-off from the other—the brief, harrowing world, with its acid rain, bird death, provisional alliances, itinerant children; and death’s timeless chamber, harboring some ultimate knowledge—one signaling to the other, perhaps, across the great rift.

Late in the book, Khristen meets Jeffrey again—still ten years old and law-obsessed, but now a judge. Far from fulfilling the promise of an adjudicating presence, Jeffrey’s judge is a joke. He’s a nail biter, a cookie dunker, earnest but ineffectual—a “shortstack,” one of his petitioners calls him. Seeing Khristen again, Jeffrey is wistful:

Even in his time it had been larger, a whatyacallit, a sacred grove, a temenos. It had once meant asylum and within it one was asulos—the inviolable. It protected what was within it and excluded that which was without. You can’t beat Greek, he thought. He felt a special relationship with the great Hellenes. They had invented logic, had they not? Temenos. The word comes from temno, to cut. Something cut from the meaningless, profane layer of life, something removed and isolated for a special purpose.”

The boy’s affinity for the Greeks makes me think of something attributed to Heraclitus: “the people should fight for the law as for a wall.” Perhaps the law is capable of dividing the sacred from profane. But Jeffrey, mumbling and overwhelmed by the court’s petitioners, appears to be playing in the rubble of a ruined circumference: “‘Words,’ he said, ‘have enabled us to get no nearer to…’ He trailed off. ‘As an instance, the law…’ He sighed and turned again, the robes gyring around him, creating the same wondrous sound of enraptured life in passage, an inhuman sound.”

Jeffrey is a fallen figure of transcendence, which should come as no surprise at this point in the novel. Williams signals her convictions on the book’s first page: “The beyond is in this life, a pretty exciting notion.” The line echoes one often quoted from the French Surrealist poet Paul Éluard: “There is another world and it is this one.” Here, the line has no attribution. Maybe it’s the sentiment of one of the tourists we meet dressed for safari or the voice of an unnamed narrator speaking out of the void—that black page that opens the book.

If the Surrealist proposition is true, then death is not the transfiguring threshold that Khristen’s mother had hoped. Death offers no ultimate knowledge—not when we’re so intent on concealing our losses from even ourselves. I think this is Joy Williams’s favorite joke—imminence, like a cosmic pratfall. (Jane Click!) Beyond the stars’ pavilions, there is no place where the turning spheres resolve themselves with a satisfying sound. There are only the little rooms where the mothers of the dead boys are waiting still for an event, already accomplished, that may never arrive.

How War Literature Occupies the Realms of Both Fact and Fiction 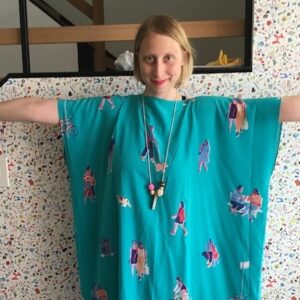 Emma Straub’s Advice for What to Wear to a Book Launch One of the great perks of being a writer is that you can wear whatever you want—think of Grady Trip's bathrobe in Wonder...
© LitHub
Back to top