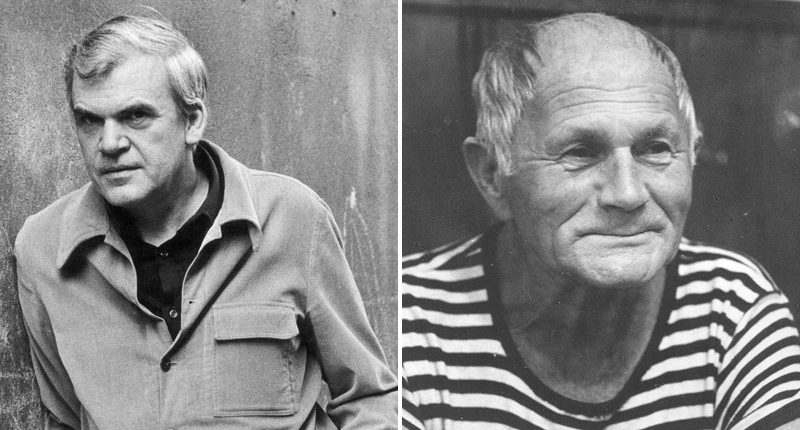 Remembering the Lessons of Kundera and Hrabal’s Czechoslovakia

How Two Writers Responded to the Pressures of an Authoritarian Government

In August 1968, the Soviet Union invaded Czechoslovakia. Milan Kundera wrote about the tanks rolling through the streets of Prague in The Unbearable Lightness of Being. Alexander Dubček, leader of the country, was hauled back to the Soviet Union where he was roughed up and forced to sign The Moscow Compromise. This saved many from executions and mass deportations to Siberia, but it also submitted the Czech people to their Soviet conqueror. Their loss included tightened restrictions on travel and work. It demanded the suppression of opposition groups and eliminated freedom of the press. “When

Dubček returned,” Kundera writes, “he gave a speech over the radio. He was so devastated after his six-day detention he could hardly talk; he kept stuttering and gasping for breath . . . The carnival was over. Workaday humiliation had begun.”

The history of writers working under tyranny or in exile is long, and each example involves its own particular cruelties. From 1968 until 1989, Czech writers like Milan Kundera and Bohumil Hrabal were put in a particularly impossible position. They spoke and wrote in Czech, a language limited to a very small part of Central Europe—and a language that had fallen under the control of a sensitive and authoritarian government.

In 1967, a year before the invasion, Kundera had published his first novel, The Joke. The book was wildly successful in Czechoslovakia, going through three major printings in quick succession and establishing Kundera as a literary star. But the novel also caught the attention of The Communist Party. In the aftermath of the Soviet invasion, Kundera’s book was banned and removed from libraries. He was fired from his job as a professor at the Prague Film School.

Yet Kundera continued to express hope for his life as a writer, and for the future of Czechoslovakia. In December 1968, he published an essay in which he said that he refused to call the political situation a national catastrophe. He wrote, “What happened is something that no one expected: a new politics has endured this frightful conflict. It has retreated, true, but it has not broken down, it has not collapsed.” He argued against the existence of restrictions that had already made themselves quite clear. “It has not reestablished a police state, it hasn’t accepted doctrinal restraints on intellectual life, it hasn’t renounced itself, it hasn’t betrayed its principles, it hasn’t surrendered its people . . . there is enormous hope for the future. And not for the distant future, but for the near one.”

But by 1975, Kundera gave up. Unable to publish and unable to work, he escaped Czechoslovakia for France. There, he wrote his two most famous and politically engaged books,

The Unbearable Lightness of Being and The Book of Laughter and Forgetting. But his books couldn’t be published in Czechoslovakia. Suddenly, Kundera had the attention of the entire world—except for the people he represented. Even in the era of post-Soviet rule, Kundera hasn’t been embraced in his native land, in part because many still see him as a traitor. Literary scholar Hana Pichova writes, “His appearances are rare and he seldom grants interviews. He visits his homeland incognito (for example by comporting a fake mustache) and, overall, the reception of his work has been lukewarm at best.” The Unbearable Lightness of Being—Kundera’s world-famous book—wasn’t published in The Czech Republic (the former Czechoslavakia) until 2006, 17 years after the fall of Communism.

Bohumil Hrabal, a contemporary and compatriot of Kundera’s, tried to stay out of politics. Hrabal used a method of storytelling, known as “palavering,” that sidestepped the impression of political critique. You can think of “palavering” as a sort of expansive rambling, an effect of going on and on. Hrabal described his uncle as a palaverer, a constant teller of stories, who “sat there at the table and stared at the ceiling and saw what he was talking about up there.”

Hrabal’s short novels and stories concern a sort of provincial worker who is more concerned with his individual days—the pleasure of food and drink, the pursuit of love and sex—than whatever is happening in the government. Closely Observed Trains, for example, is a rambling comedy about rail station workers. Dancing Lessons for the Old Age is told in the form of a soliloquy from a drunken raconteur who’s trying to impress a group of sunbathing women. But Hrabal’s characters still lived in Czechoslovakia, and they couldn’t avoid all of the absurdities and hypocrisies of 20th-century Europe, though Nazis often loomed larger in Hrabal’s stories than the Communists.

As Adam Thirwell puts it, “Hrabal’s books were constantly entangled in the history they sought to evade—the shifts of political alignment. Behind the precision of his style is always the politics of Prague.” Hrabal was able to salvage his home in Czechoslovakia but at major creative and psychological cost. “

For approximately 15 years, Hrabal experienced several periods in which his work was banned by the Czechoslovak Communist Party,” writes Meghan Forbes. “But in 1975, he conducted an interview in which he made conciliatory political statements, simultaneously sending ripples through the dissident community while enabling him to publish again.” Anti-communist protesters burned his books in the streets.

“The Great Central European novelists ask themselves what man’s possibilities are in a world that has become a trap,” Kundera wrote in The Art of the Novel, published in 1986. In the Czech Republic-Czechoslovakia-the Austro-Hungarian Empire, this literary notion stretches back to Franz Kafka, a German-speaking Jew who lived in Prague his whole life and often obsessed over similar questions. The Trial is about a man who is arrested for reasons that his captors won’t name. And then there’s Gregor Samsa, rolling feebly on his back.

The suffocating hand of the Soviet regime is visible Hrabal’s censored publications after the invasion. Josef Škvorecký points to a passage alteration—in the climactic firing of a central character—in Hrabal’s Harlequin’s Millions.

In the now restored, original edition:

When Dad left the office, this was what the workers’ director had been waiting for, he took both lamps with their green shades and he threw them out of the window on to a heap of lumber and scrap, and the green shades and cylinders smashed to pieces and Dad clutched his head and there was a crumpling sound inside, as if his brain had been smashed. “The new era’s beginning here too,” said the workers’ director, and he went into his office.

In the censored version, published at the time:

Well, what do you think comrades? Shall we be magnanimous? Take the lamps as souvenirs of old times which were good to you.

This wasn’t the flexible communist state that Kundera had once hopefully imagined.

Hrabal’s greatest book, Too Loud a Solitude, tells the story of a drunken book-pulper. “For thirty-five years I’ve been compacting wastepaper and books, smearing myself with letters,” the narrator explains. “A good three tons of them I’ve compacted over the years.” One of the richest absurdities of this story is that the narrator finds quite a lot of joy in his work. When he encounters a giant book-pulping machine that threatens to make his job obsolete, he returns to his own small operation and works to increase his output by 50 percent. Thirwell writes, “This was the ethical basis of Hrabal’s escape from the political . . . a position of absolute irony.”

That irony was crucial for Hrabal in terms of being able to write at all in Soviet-controlled Czechoslovakia, but it only helped him so much. Like many of Hrabal’s other books, until 1989, Too Loud a Solitude was mostly available abroad. In Czechoslovakia, it could only be published via samizdat, an underground copying and distribution initiative in Communist Europe that usually generated only a few dozen copies of each book. Eventually, Hrabal complied with the state to an enormous extent, to a point that involved turning away from many of his peers. But it hardly mattered.

“[Mirek] had finally come around to the position of his more cautious friends,” Kundera writes in The Book of Laughter and Forgetting, evoking a time in Prague even before the invasion. “True, the constitution guaranteed freedom of speech; but the law punished any act that could be construed as undermining the state. Who could tell when the state would start screaming that this or that word was undermining it?”

One of the major successes of the Soviet regime’s control of Czechoslovakia was the creation of a generalized fear, making the Czech people suspicious of each other. Kundera has been largely disavowed by his native land, and in 2008, he was dubiously accused of once working with the Communist Police. Toward the end of his life, Hrabal came to see himself as a coward. At the age of 82, he jumped from the fifth story window of a hospital and died.

To honor the legacies of these men is important—their books are restored and available now, and you can read them with ease—but the more profound story here is in what happened to these writers while still under an authoritarian government. And lost in any narrative about Czech writers and artists who managed to endure these politics and continued to create are the many who didn’t—those who were forcibly moved to the countryside, made to work in the mills and factories, and silenced.

The survival of the writer under an unpredictable government is no less a serious concern today. Elif Shafak recently wrote a crucial piece on the silencing of writers in Turkey. “We find ourselves divided into little cells, with glass walls,” she says. “Even old friendships are fractured.” On an even more frightening level, consider the activists in Aleppo,

disappearing from Twitter as their city is shelled and soldiers shoot civilians in the streets.

Warning flares are going up in the United States, too, where our President-elect threatens his competitors, intimidates private citizens, and warns that he’ll alter libel laws so journalists can be “sued like they’ve never been sued before.” This past week brought us another painful parallel between the 2016 US Presidential Election and the 1968 invasion of Czechoslovakia: the role of Russia. We don’t have tanks rolling through our streets, but a digital hack and a manipulated election nonetheless feel like a kind of 21st-century echo. It’s almost Hrabalesque in its absurdity. It’s almost darkly comic. Like the Kundera of 1968, we can opt to have hope now, even for the immediate future. But we should also keep in mind that the immediate future didn’t work out for Kundera the way he once optimistically thought it might. And it didn’t for Hrabal, who complied much more readily, either. 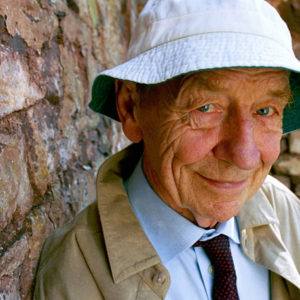 Last winter, as I was concluding work on my first book—making final revisions to a collection of stories with which I’d...
© LitHub
Back to top