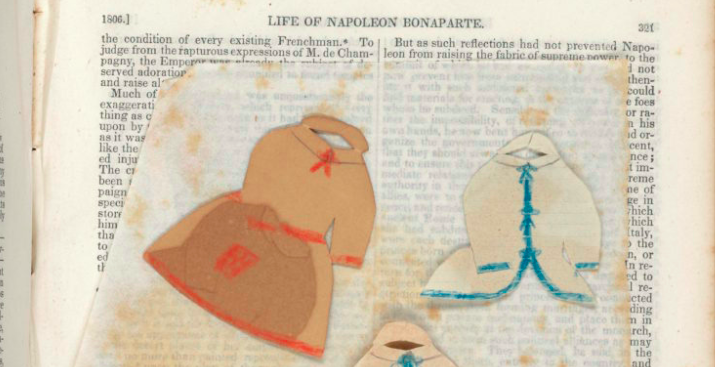 There are amazing things hidden in the stacks of the University of Virginia library. In fact, there are amazing things hidden in the stacks of most libraries—which is more or less the point. At UVA, a project called Book Traces is underway to look inside every book in the stacks that was published before 1923—which, as you might imagine, is a fair number—for “interventions” that may shed light on how the books were read, studied, and used as physical objects. The interventions might be handwritten marginalia, original poetry, pasted-in newspaper clippings or illustrations, physical modifications to the book, or any one of a variety of small objects—letters, photographs, leaves, locks of hair—tucked between the pages years ago and forgotten.

As Andrew Stauffer, a professor of 19th-century-literature at UVA who started Book Traces, explained, “People have always paid attention to the marginalia of famous people, or that written in books in much earlier eras (i.e., in medieval and early modern books). But we haven’t had a way to see nineteenth and early twentieth century marginalia of the common reader, because it is mostly uncatalogued.” In addition, as libraries make moves towards digital collections and books are scanned and then discarded or stored, this kind of information will likely be lost—a love letter tucked into a novel might just be thrown away because it was blocking the text.

I myself was once a graduate assistant on this project, and let me tell you: on the ground level, it’s a lot of looking inside dusty books that no one has opened in decades. But when you do find something—a drawing, or a photograph, or an ode to a lost loved one—the effect is magical. The book becomes a direct link to someone else’s life. I asked Book Traces Project Manager Kristin Jensen to share some of her favorite intervention from the project and the stories behind them, which you can find below. The project also maintains a blog, where you can see more old books and even submit your own findings. 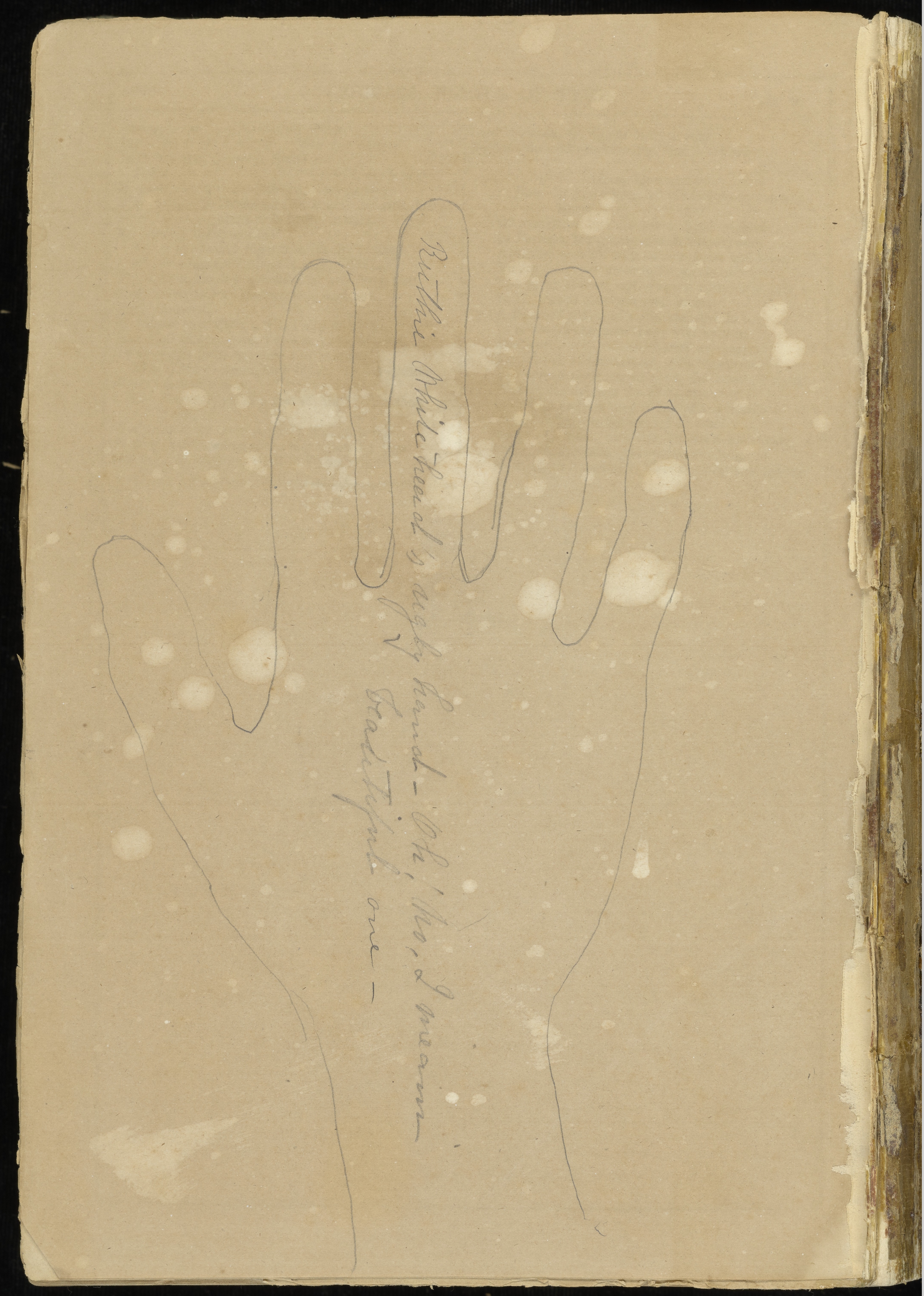 “Among other marginalia, this 1853 volume of Shakespeare’s works includes hand tracings and schoolgirl Miriam Trowbridge’s teasing inscription, “Ruthie Whitehead’s ugly hand—Oh! No, I mean beautiful one—”. The girls seem to have been outlining each other’s hands in their textbook while at Madame Chegary’s fashionable boarding school in New York.” 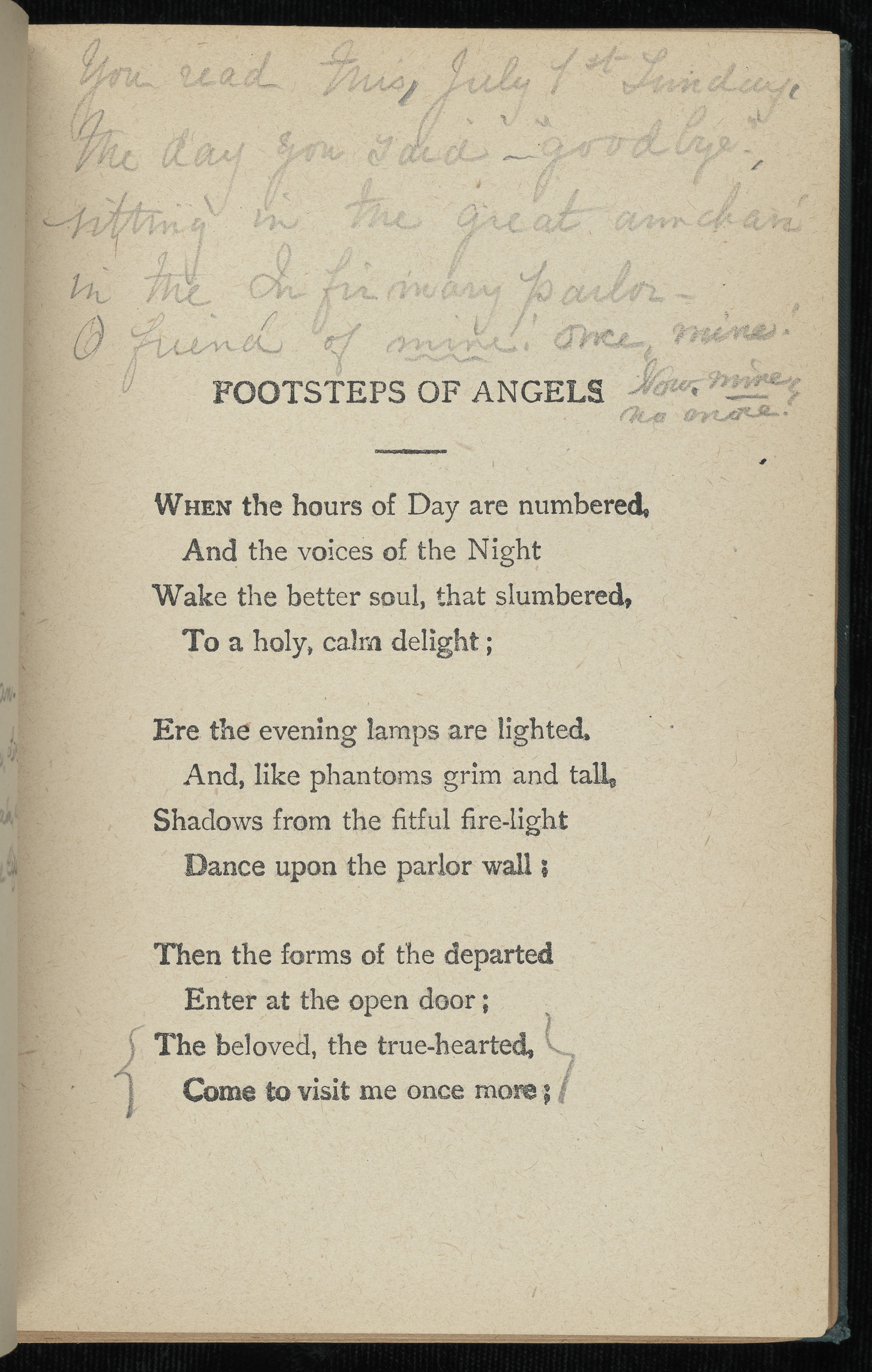 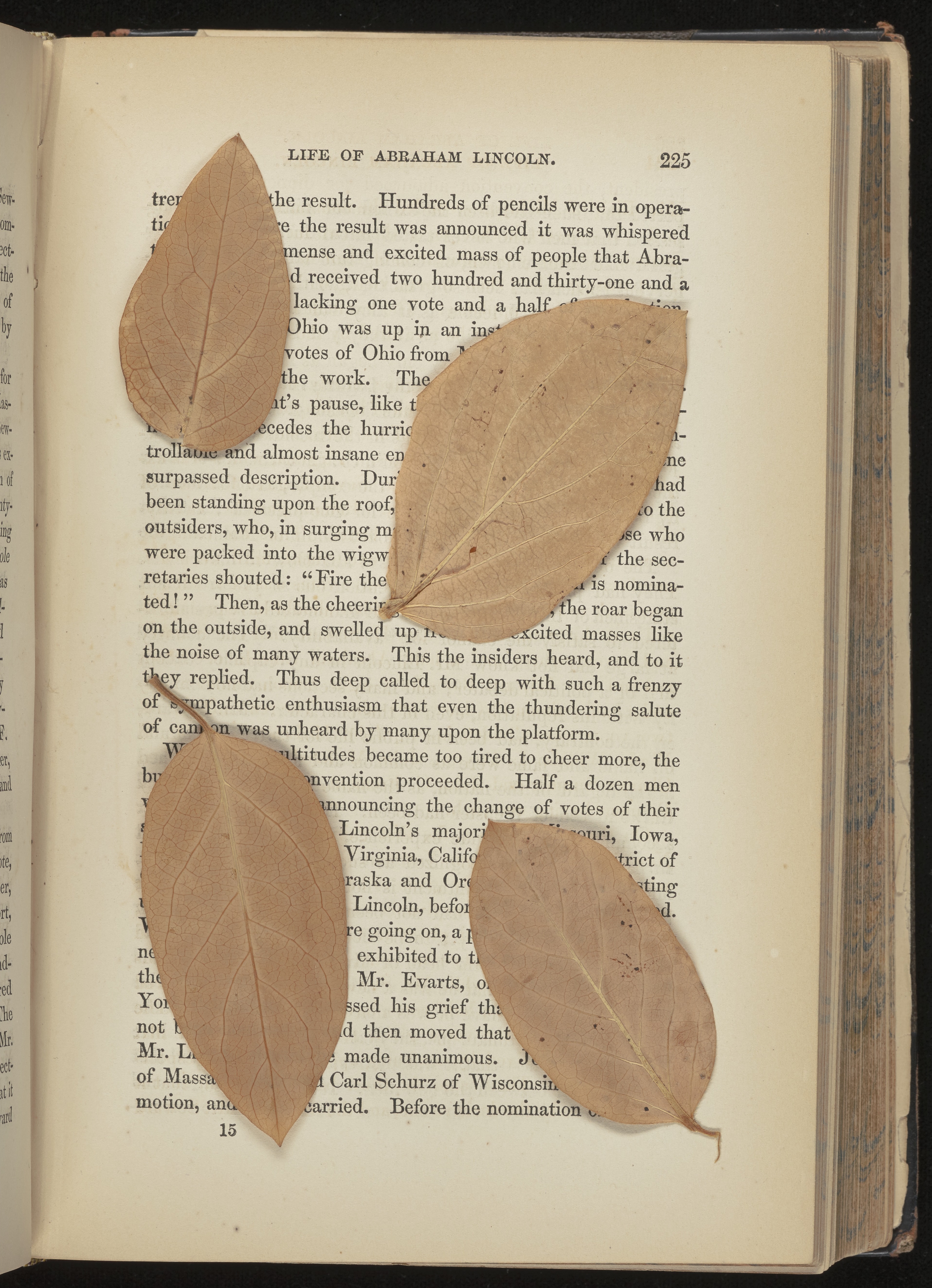 “It is not unusual to find dried leaves or flowers pressed between the pages of old books. These tree leaves were found in a copy of The Life of Abraham Lincoln published the year after Lincoln’s assassination in 1865.” 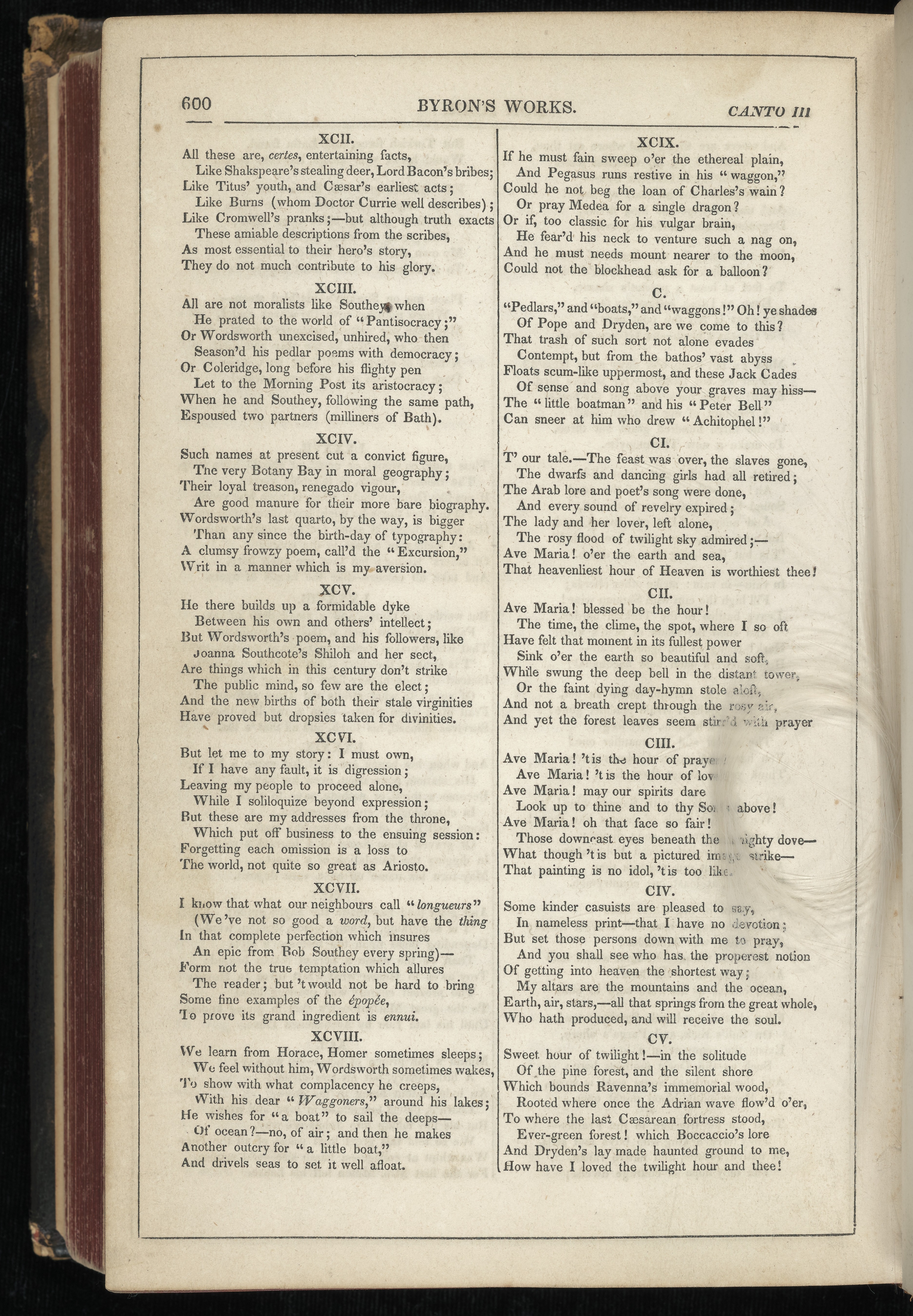 “This 1851 edition of The Works of Lord Byron was used to safeguard a very personal memento: a lock of gray hair tied into a circle. The book was formerly owned by one Neil Heilman but we do not know whose hair it is.” 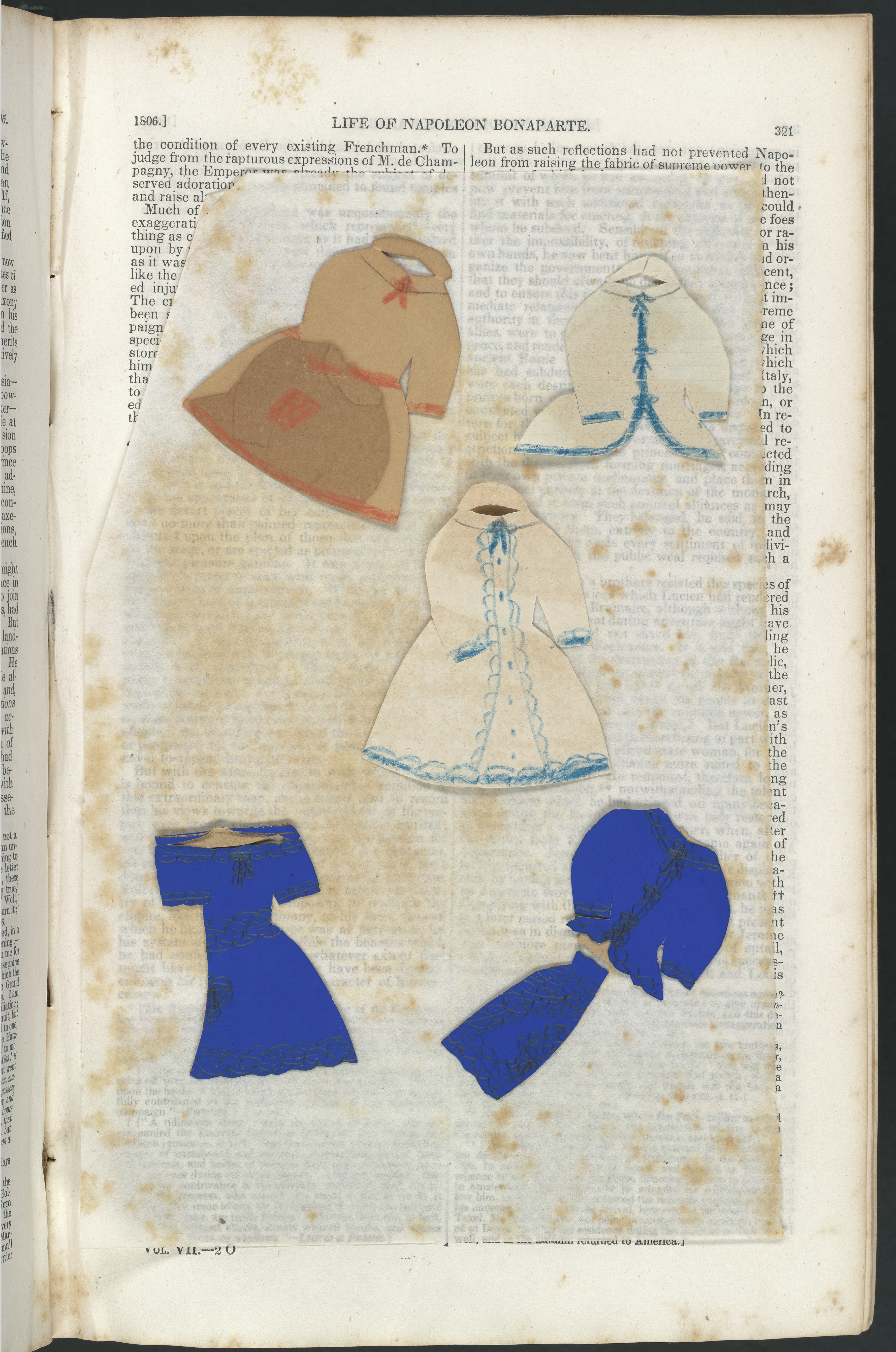 “These tiny paper doll clothes in antebellum styles are among the most endearing of all Book Traces finds. An unknown former owner left them in volume seven of a multi-volume edition of The Works of Sir Walter Scott published in 1833.” 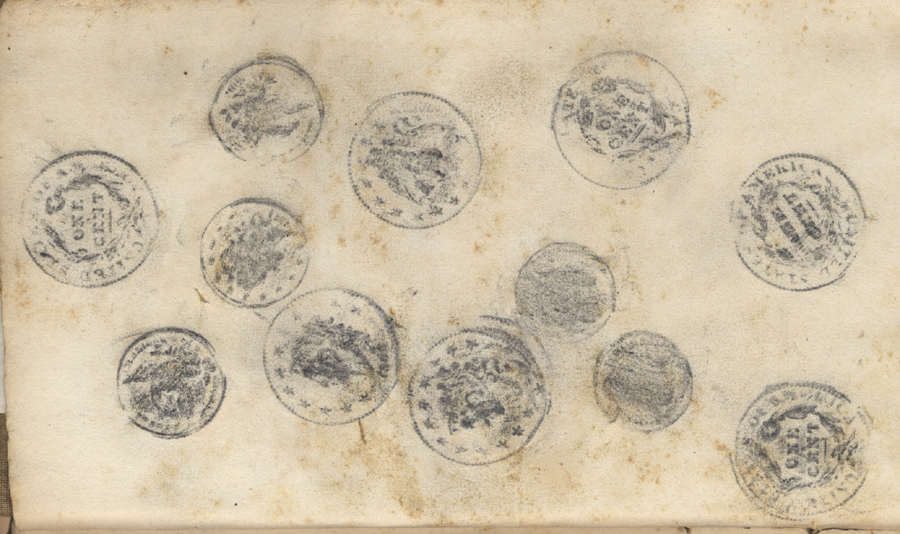 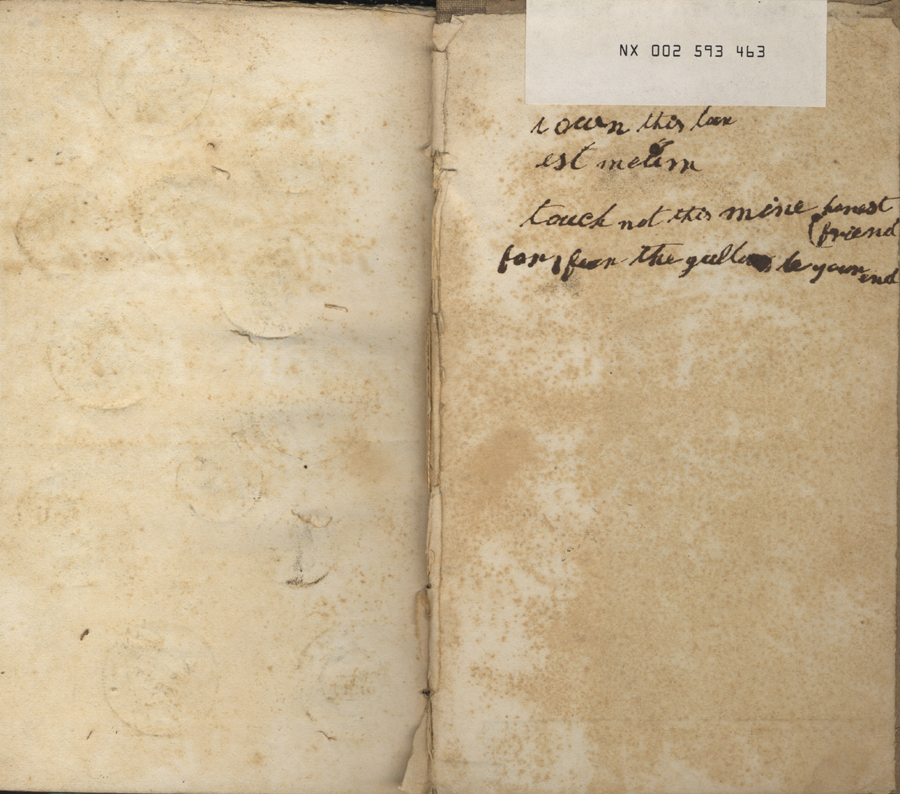 “John Staige Davis marked this book as his property and probably used its pages for rubbings of early nineteenth-century coins. Considering that J. S. Davis was only nine years old when the book was published by a University of Virginia student in 1833, it seems likely that the book was first acquired by his father, John A. G. Davis, who was a professor of law at the University at the time. Although the book was published anonymously, it has been attributed to Thomas Semmes. In a strange historical twist, Semmes’ cousin Joseph Semmes would fatally shoot the elder Davis outside the Davis family’s home on the UVA campus in 1840. The murder is infamous in UVA history and has been credited in University lore as inspiring the University’s Honor Code; in actuality, John A. G. Davis had established the beginnings of an honor code in response to student discipline problems well before his death.” 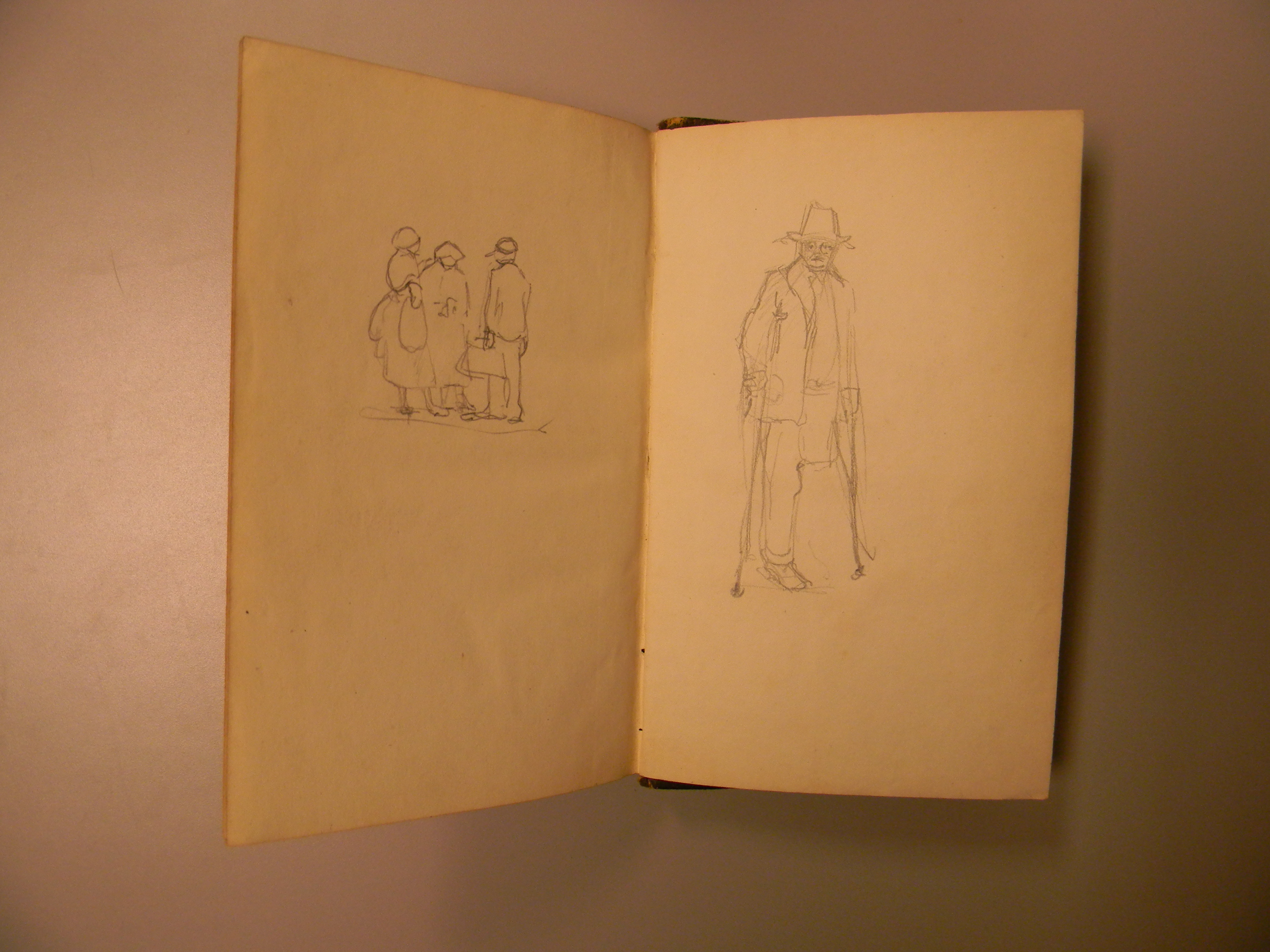 “This volume of works by Adam Mickiewicz, a prominent figure in Polish Romanticism, was published in 1862 and later owned by architect and artist Stanislaw J. Makielski. Makielski, who was a professor of architecture at the University of Virginia from 1919 to 1955, designed an addition for the University’s Alderman Library known as “New Stacks” where this book with his figural sketches on its flyleaves was found, presumably having been donated to the Library’s collection at some point.” 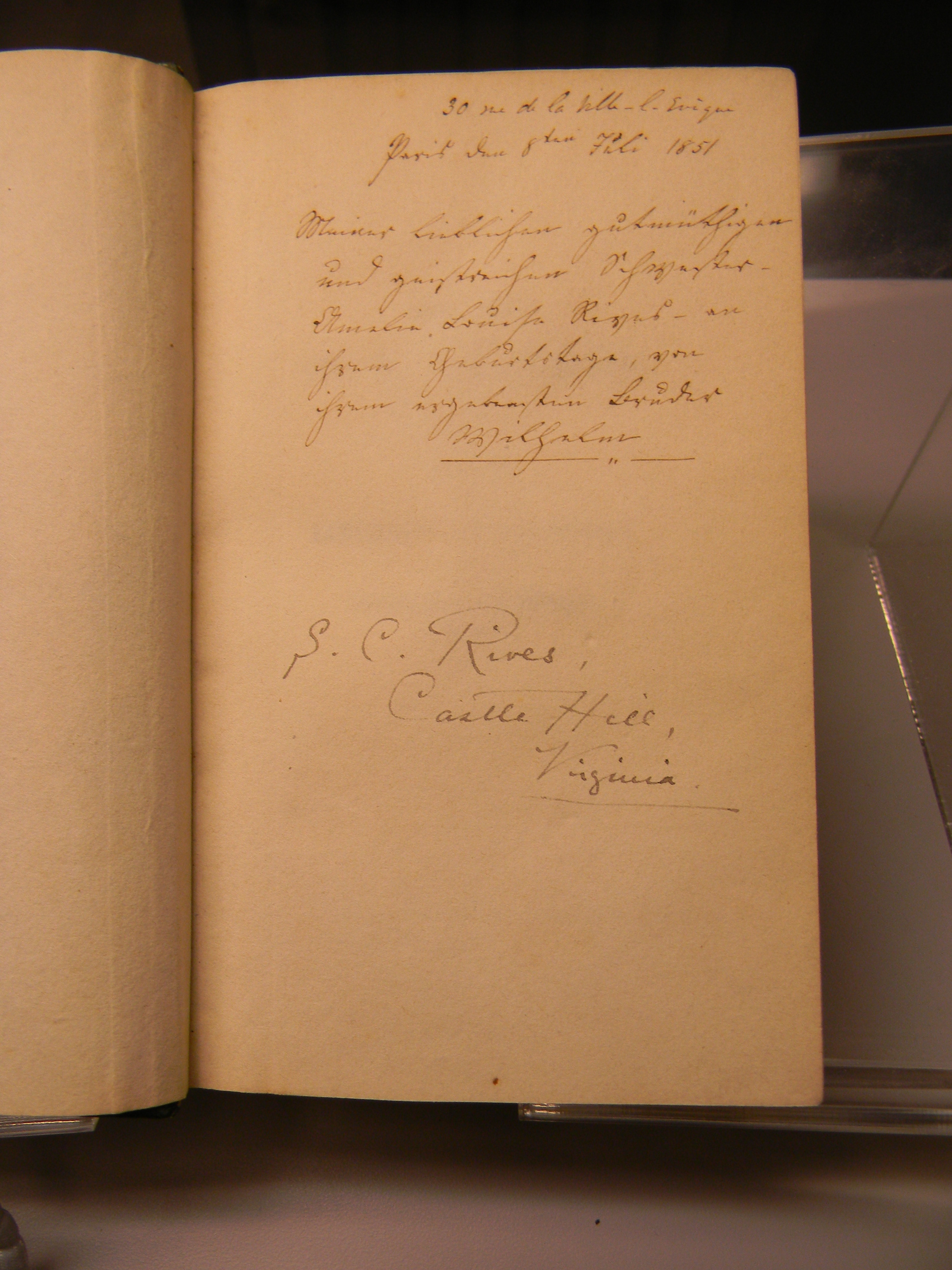 “Books from many parts of the world have found their way to the University of Virginia collections, often by way of the private libraries owned by wealthy Virginia families. This French textbook, published in 1848, has inscriptions indicating that it was acquired in Paris in 1851 and later became part of the Rives family’s library at their central Virginia estate, Castle Hill.” 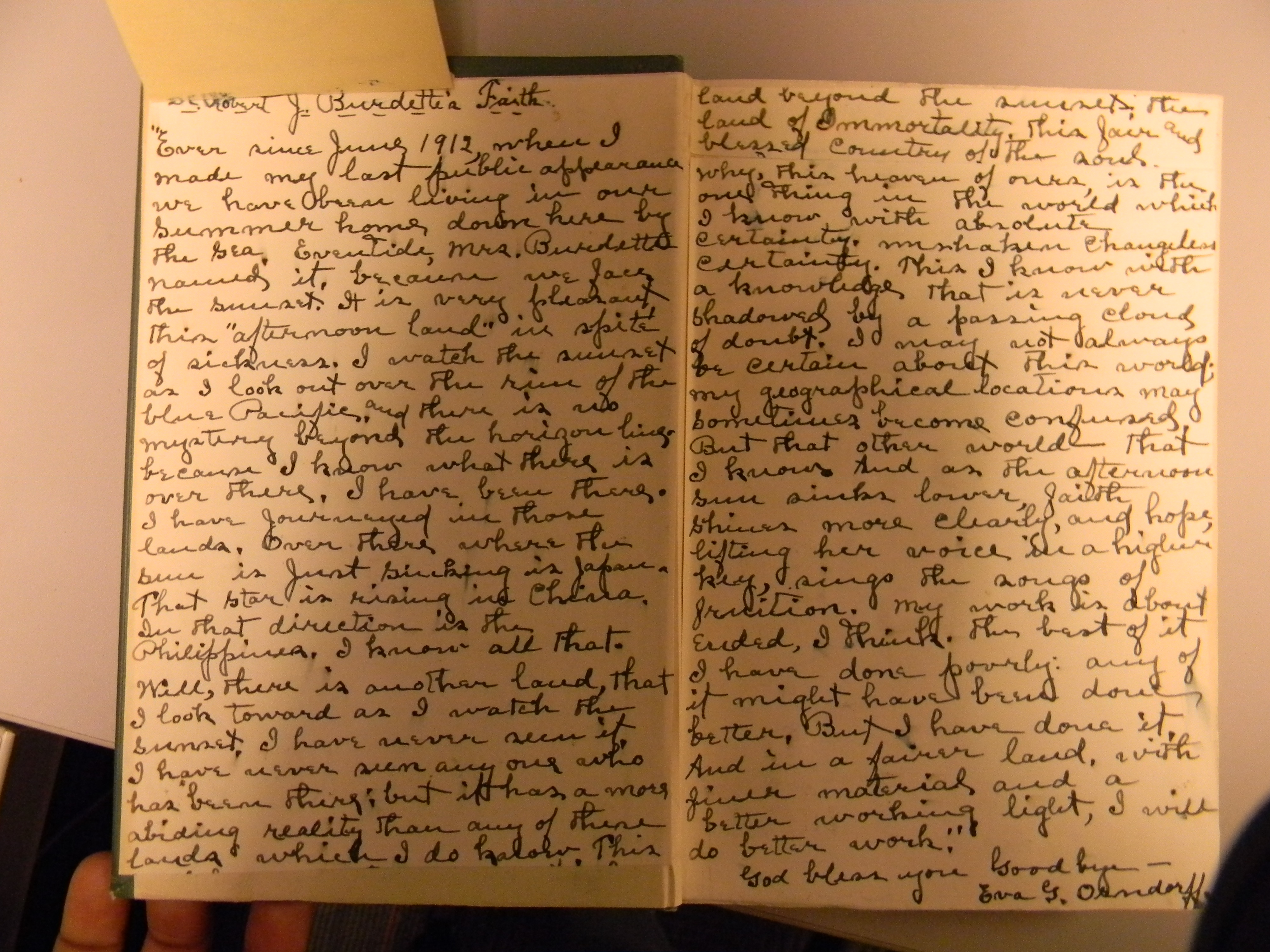 “When you first open this book from 1919, it appears to have a letter by the religious writer Robert J. Burdette copied onto the inside of the front cover. In fact, someone copied Burdette’s letter (widely published by newspapers in 1915) onto sheets of paper and carefully glued them into the book.” 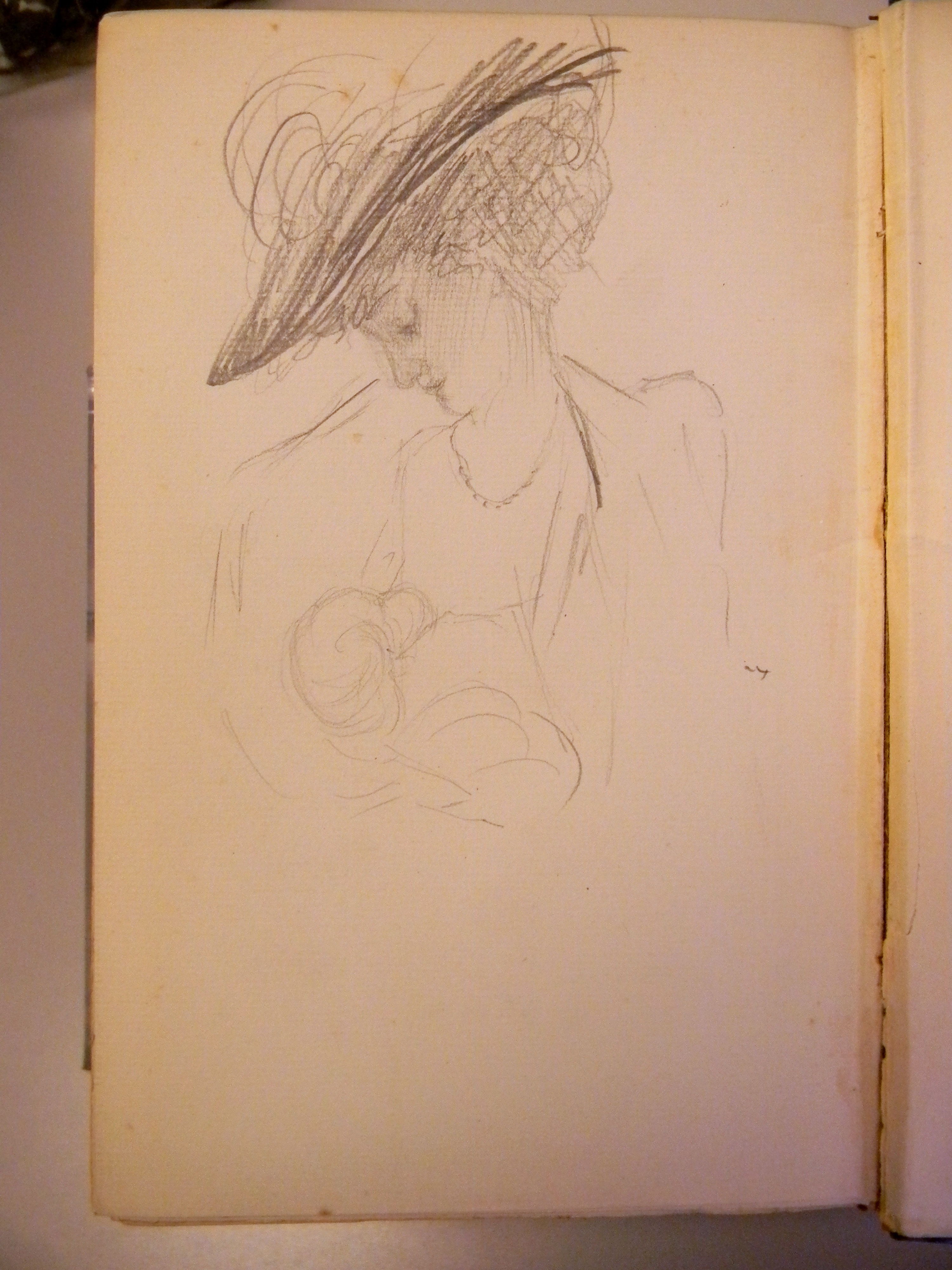 “Published in 1907, this book is a biography of the eighteenth-century Irish aristocrat Elizabeth Gunning. In the copy found by Book Traces @ UVA, one flyleaf has been used as a sketchpad for this portrait of an elegantly-dressed lady apparently breastfeeding an infant. Although neither the artist nor the subjects of the portrait can be identified with certainty, we know that the book belonged at one time to the British politician Ronald Lambert Tree. The woman in the picture may be his mother, Ethel Beatty, nursing her third child, who was born in 1910. Ethel was the daughter of the American department store magnate Marshall Field and had married an Anglo-Irish naval officer, David Beatty, following her divorce from Ronald’s father.” 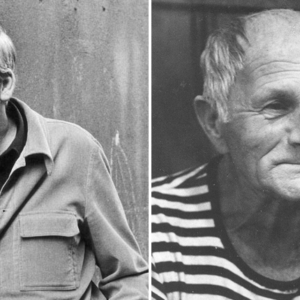 In August 1968, the Soviet Union invaded Czechoslovakia. Milan Kundera wrote about the tanks rolling through the streets...
© LitHub
Back to top
Loading Comments...