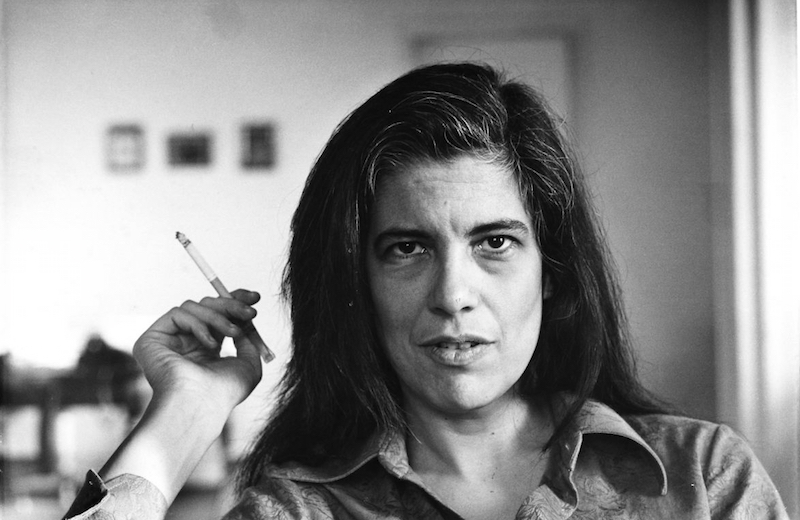 Katie Roiphe on the Legendary Writer's Will to Survive

If there is anyone on earth who could decide not to die it would be Susan Sontag; her will is that ferocious, that unbending, that unwilling to accept the average fates or outcomes the rest of us are bound by. She is not someone to be pushed around or unduly influenced by the idea that everyone has to do something or go through something, because she is and always has been someone who rises above. Nonetheless, right before Christmas, she is lying in a bed in Memorial Sloan Kettering Cancer Center, on the Upper East Side of Manhattan, doing something that very much appears to those around her to be dying.

One night she and her friend Sharon DeLano stay up late listening to Beethoven’s late string quartets in her hospital room. Sontag is very doped up. She is in a good enough mood to tell Sharon one of her favorite jokes. “Where does the general keep his armies?” Sharon answers, “I don’t know.” “In his sleevies,” Sontag says, smiling.

The next day she is much more sober. When Sharon arrives, Susan is reading the German filmmaker Rainer Werner Fassbinder’s juvenilia and they watch two movies together. Sharon has to press pause frequently, because Susan is talking through the whole movie, adding commentary and glosses.

Sontag’s third cancer comes into focus when Sookhee Chinkhan, her housekeeper, who’s been with her for over a decade, sees bruises on her back when she is drawing her bath. Sookhee works for Susan five days a week, cleaning, cooking; there is a running chatter between them that other people are bewildered by.

The diagnosis of myelodysplastic syndrome, which leads to a particularly virulent strain of blood cancer, comes in March 2004. In the weeks afterwards, Sookhee notices that sometimes she says, “Wow wow,” and closes her eyes. Susan tells her it’s the pain.

Inevitably, this latest illness brings back Sontag’s first, dire cancer diagnosis in 1975. She was in her early forties when she discovered that she had stage 4 breast cancer. None of the doctors she initially consulted thought she had any hope at all, but she sought out aggressive treatments and she survived. From that point onward, the transcendence of ordinary illness and ordinary endings became incorporated and entangled with who she was—the person who seeks treatment, who solves her disease like a math problem, like a logical puzzle of the highest order. “I am gleaming with survivorship,” she wrote in the 80s. The brush with death was incorporated into her dark glamour, her writer’s pose. In an essay on photography, she wrote about “the sex appeal of death,” and this was a sex appeal that she took on, the danger and thrill of coming near to it, of breathing it in, and turning back.

In early interviews after her recovery from breast cancer, she seemed intoxicated by her proximity to death. She said the following in an almost giddy interview in The New York Times in 1978: “It has added a fierce intensity to my life, and that’s been pleasurable . . . It’s fantastic knowing you’re going to die; it really makes having priorities and trying to follow them very real to you.”

While she was being treated for her breast cancer, she did not stop working or thinking, or struggling to work and think. In the midst of chemotherapy, she was taking notes for her elegant and influential polemic Illness as Metaphor. In it she argues against the various fantasies that surround disease. Instead of poetry and emotionally charged beliefs, she argues, patients need clarity, rational thought, and medical information, to prepare themselves for the hard work of the cure. In her hospital room, she wrote in her journal, “I have become afraid of my own imagination,” and it was this fear she so brilliantly investigated and rejected in Illness as Metaphor. She writes that the imagination, the romantic overlay we give disease, is itself violent, destructive.

After the diagnosis of myelodysplastic syndrome, Sookhee sometimes sleeps over in the living room, because Susan does not want to be alone. One night she wakes up to Susan screaming. She is panicked. Sookhee has never seen her like this before. Sookhee sits on the bed and holds her and begins to pray, because that is all that she can think to do. “Please Lord, give Susan peace.”

In “The Way We Live Now,” her excellent short story about illness, about what it is like to be sick, Sontag writes: “Dying is an amazing high he said to Quentin. Sometimes I feel so fucking well, so powerful, it’s as if I could jump out of my skin. Am I going crazy, or what? Is it all this attention and coddling I’m getting from everybody, like a child’s dream of being loved? Is it the drugs? Or what? I know it sounds crazy but sometimes I think it is a fantastic experience.” She writes this in 1986 as someone who knows what dying feels like. She writes this as someone who was dying and then turned back.

That spring of 2004, after her diagnosis with leukemia, she turns her apartment into a center for medical research. Everyone is doing Internet searches, and friends are calling with suggestions and doctors’ names and obscure studies. Susan’s young assistant, Anne Jump, helps her find as much information about the illness as she can. They have gone into crisis mode, and everything is about finding a cure. Susan becomes a student of her disease; she studies, underlining in the leukemia pamphlet. Once, years earlier, she jotted down in her notebooks an Auden quote: “I must have knowledge and a great deal of it before I feel anything.”

The night before her first exploratory surgery for breast cancer in 1975, she sat in her hospital room at Sloan Kettering with a close friend. Susan was very much herself, which is to say that she had snapped at the intake nurse who called her “Sue” and brought another well-meaning friend who had tried to talk in the platitudes of adversity almost to tears. And yet all of this snappishness was energy, high spirits of a kind, the imposition of herself on the world.

The sun was going down and she suddenly decided she wanted to write the introduction to Peter Hujar’s book of photographs, Portraits in Life and Death, which she had agreed to do a long time before but had procrastinated. The portraits of prominent downtown figures included one staggeringly beautiful one of her, lying on a bed, staring upward, in a gray cable sweater; there were also the remarkable photographs of human remains from the catacombs in Palermo from the early 60s.

Hujar had brought the photographs of the catacombs over to Sontag’s house on Washington Place after he took them. There was some discussion of coming after Sontag’s eleven-year-old son, David, was asleep, so that the photographs wouldn’t alarm him and give him nightmares.

That evening in the hospital in 1975, her friend found something wide and flat for her to write on, and she scribbled away. The mood of the essay is dreamier than usual. In her hospital bed, she took a romantic, intimate view of death with its “sweet poetry and its panic.” Her scrawled sentences have a mesmerized quality too. She was staring at something in the middle distance that we cannot normally see. “We no longer study the art of dying, a regular discipline and hygiene in older cultures,” she wrote, “but all eyes, at rest, contain that knowledge.”

There was peace in the room as she was writing. To be finishing, to be working: This was important to her. The friend who sat with her leafed through a magazine as the orange dusk flooded the room. The essay, one of her more graceful, unbelabored pieces of writing, took her less than an hour.

Her friend remembers her quoting Samuel Johnson with amusement: “Depend upon it, sir, when a man knows he is to be hanged in a fortnight it concentrates his mind wonderfully.” Peals of laughter after saying it.

If Sontag was fierce in her determination to fight in that first experience with cancer, her companion of the time, Nicole Stéphane, was equally fierce. Nicole tracked down Dr. Lucien Israel, who pioneered Sontag’s experimental treatment, in Paris. He wrote to Sontag, “I do not think your case is hopeless,” and that very faint expression of optimism was enough to spur her on. After the operation for her breast cancer, a radical mastectomy called a Halsted, someone sent flowers to Susan’s apartment on Riverside Drive. Nicole threw them off the terrace in rage. Flowers were for death.

Later, in Sontag’s private mythology, this fierceness is processed as a by-product of her intellect and determination: her refusal to accept her diagnosis or her mortality, her ability to shake off the metaphors of her illness and act. But now, in 2004, with this latest, dire diagnosis, she is laboring to maintain her belief in this specialness; she is now having to work to prop it up. She says to several people, including David, “I don’t feel special this time,” or “I don’t feel lucky this time.” She is working to fight off the dread, to find her way back to the luck, the specialness, again.

In the meantime, she doesn’t want to be alone. She doesn’t like the lights off. She has people coming through all the time, people in attendance. These people offer reassurance that she is who she was. One gets the sense that it is only in the dark, and alone, that she is dying.

Excerpted from THE VIOLET HOUR. Used with permission of Dial Press. Copyright © 2016 by Katie Roiphe.

Katie Roiphe received her Ph.D. from Princeton in English literature. Her articles have appeared in the New York Times, The Washington Post, Slate, Esquire, Vogue, Harper’s, and The New Yorker. Her previous books include The Morning After, Last Night in Paradise, and a novel, Still She Haunts Me. She lives in New York.

Jim Harrison, the great American writer, novelist and poet, died on Saturday night at the age of 78. His last book of poems,...
© LitHub
Back to top