Remembering a Great Writer Through Some of His Final Words

Jim Harrison, the great American writer, novelist and poet, died on Saturday night at the age of 78. His last book of poems, Dead’s Man Float, was published by Copper Canyon in January of this year.

Seven in the Woods

Am I as old as I am?
Maybe not. Time is a mystery
that can tip us upside down.
Yesterday I was seven in the woods,
a bandage covering my blind eye,
in a bedroll Mother made me
so I could sleep out in the woods
far from people. A garter snake glided by
without noticing me. A chickadee
landed on my bare toe, so light
she wasn’t believable. The night
had been long and the treetops
thick with a trillion stars. Who
was I, half-blind on the forest floor
who was I at age seven? Sixty-eight
years later I can still inhabit that boy’s
body without thinking of the time between.
It is the burden of life to be many ages
without seeing the end of time.

An old man is a spindly junk pile.
He is so brittle he can fall
through himself top to bottom.
No mirror is needed to see the layers
of detritus, some years clogged with it.
The red bloody layer of auto deaths
of dad and sister. Deaths piled like cordwood
at the cabin, the body 190 pounds of ravaged
nerve ends from disease. The junk pile is without
sympathy for itself. A life is a life,
lived among birds and forests and fields.
It knew many dogs, a few bears and wolves.
Some women said they wanted to murder him
but what is there worth murdering?
The body, of course, the criminal body
doing this and that. Some will look
for miraculous gold nuggets in the junk
and find a piece of fool’s gold in the empty
cans of menudo, a Mexican tripe stew.

Warm enough here in Patagonia AZ to read
the new Mandelstam outside in my underpants
which is to say he was never warm enough
except in summer and he was without paper to write
and his belly was mostly empty most of the time
like that Mexican girl I picked up on a mountain road
the other day who couldn’t stop weeping. She had slept
out two nights in a sweater in below-freezing weather.
She had been headed to Los Angeles but the coyote
took her money and abandoned her in the wilderness.
Her shoes were in pieces and her feet bleeding.
I took her to town and bought her food. She got a ride
to Nogales. She told us in Spanish that she just wanted
to go home and sleep in her own bed. That’s what Mandelstam
wanted with mother in the kitchen fixing dinner. Everyone
wants this. Mandelstam said, “To be alone is to be alive.”
“Lost and looked in the sky’s asylum eye.” “What of
her nights?” Maybe she was watched by some of the fifty
or so birds I have in the yard now. When they want to
they just fly away. I gave them my yard and lots of food.
They smile strange bird smiles. She couldn’t fly away.
Neither can I though I’ve tried a lot lately to migrate
to the Camargue on my own wings. When they are married,
Mandelstam and the Mexican girl, in heaven they’ll tell
long stories of the horrors of life on earth ending each session
by chanting his beautiful poems that we did not deserve.

I’m not so good at life anymore.
Sometimes I wake up and don’t recognize it.
Houses, cars, furniture, books are a blur
while trees, birds, and horses are fine
and clear. I also understand music
of an ancient variety—pre-ninteenth century.
Where have I been?
Recounting flowers from the train window
between Seville and Granada, also bulls and olive trees.
I couldn’t sleep in Lorca’s room because it was haunted.
Even the wine I carried was haunted.
Spain has never recovered from this murder.
Her nights are full of the red teeth of death.
There were many who joined him. You can’t count,
up and down, birds and flowers at the same time.

I love these raw moist dawns with
a thousand birds you hear but can’t
quite see in the mist.
My old alien body is a foreigner
struggling to get into another country.
The loon call makes me shiver.
Back at the cabin I see a book
and am not quite sure what that is.

Most of my life was spent
building a bridge out over the sea
though the sea was too wide.
I’m proud of the bridge
hanging in the pure sea air. Machado
came for a visit and we sat on the
end of the bridge, which was his idea.
Now that I’m old the work goes slowly.
Ever nearer death, I like it out here
high above the sea bundled
up for the arctic storms of late fall,
the resounding crash and moan of the sea,
the hundred-foot depth of the green troughs.
Sometimes the sea roars and howls like
the animal it is, a continent wide and alive.
What beauty in this the darkest music
over which you can hear the lightest music of human
behavior, the tender connection between men and galaxies.
So I sit on the edge, wagging my feet above
the abyss. Tonight the moon will be in my lap.
This is my job, to study the universe
from my bridge. I have the sky, the sea, the faint
green streak of Canadian forest on the far shore.

Where Is Jim Harrison?

He fell off the cliff of a seven-inch zafu.
He couldn’t get up because of his surgery.
He believes in the Resurrection mostly
because he was never taught how not to. 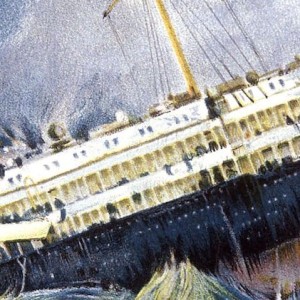 The most difficult part of my writing life begins the moment one of my books is launched. I am not talking here about the angst...
© LitHub
Back to top