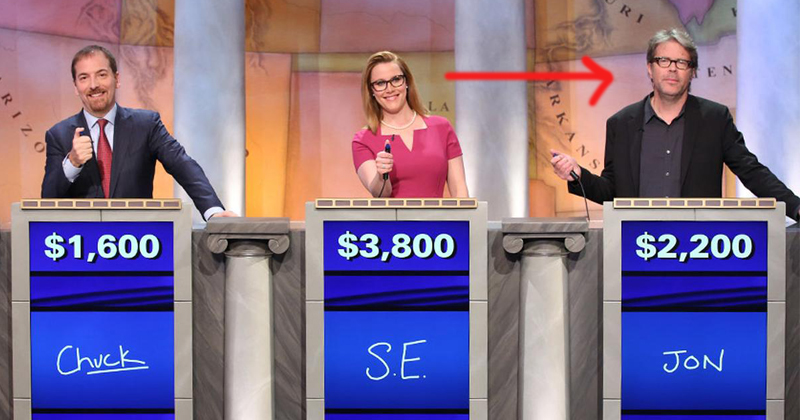 Remember when Jonathan Franzen was on Jeopardy!?

Like many other people on Literary Twitter and also in the General Media, I have recently received an advance copy of Jonathan Franzen’s next novel, Crossroads. I have not yet begun to read it, though I will, and not, like some of you, because I hope it will be bad. I hope it will be good. In the J-Franz culture wars, I am agnostic. I have enjoyed some of his books more than others. I think the internet has given him a hard time, but I also think that sometimes he was asking for it. I do not presume to know how much what we see of Franzen is the work of a higher power, and so on. Ultimately, though, I’ll always give his books a shot. I do appreciate a good hater.

Anyway. This is all to say that I was thinking about Jonathan Franzen and then I was thinking about how in 2016, he was on celebrity Jeopardy! with Chuck Todd and S.E. Cupp and everyone made fun of him for missing a couple of Shakespeare questions. (On the other hand, he got all the Bird questions. Seems like those categories weren’t random, Alex.) Franzen (“Jon”) called being on the show “a nightmare come true” and hid behind his podium when he didn’t know the answer to something literary, which feels basically on brand.

But actually, the best part of Jonathan Franzen being on Jeopardy! was not the Birds nor the Shakespeares nor the Jon but this Observer review of the otherwise mostly forgettable television moment by novelist/satirist/journalist/Jeopardy! champ Neal Pollack, entitled “Why I Almost Committed Suicide Watching Jonathan Franzen on Jeopardy,” which is a chaotic, hilarious, and short tale of jealousy and madness. Here is a taste:

On Jeopardy, Jonathan Franzen knew all the answers. Of course he did. He’s Jonathan Franzen! They gave him a category about Birds in the first round. He got those questions right, of course. That’s like giving me a category called “Jerkin’ It.” There was also a Shakespeare category. Mr. Franzen knew those answers, too, though he didn’t ring in to answer that the Tamer of the Shrew was named Petruchio, an answer that I, sitting on my couch in my underwear while smoking a joint, knew immediately. “I should have known that,” Franzen said, fake-demurely.

You may not be able to find the full clip of Franzen missing his Final Jeopardy question, but Pollack’s review is definitely worth a re-read. I should also re-read The Corrections, shouldn’t I? Hmm…