If you’re reading this space, I probably don’t have to tell you that J.D. Salinger is one of the undisputed literary gods of America. The Catcher in the Rye is still ubiquitous in high schools; the short stories are inarguable masterpieces. Plus, Salinger is mysterious, his image rarely seen, which never hurts a god’s portfolio. So when I heard that we’d be getting a movie about the author’s life, I was excited—though I suppose I should have known not to be. Rebel in the Rye does a disservice to Salinger, who would have hated vehemently any movie made about him, but this one in particular, as well as to his fans.

Rebel in the Rye, Danny Strong’s feature directorial debut, is an adaptation not of The Catcher in the Rye (such a thing would be impossible, simply impossible, reportedly) but of Kenneth Slawenski’s J.D. Salinger: A Life, starring Nicholas Hoult as the titular god. Hoult does fine, but if anyone hoped to learn something about the famously reclusive writer, or even get a sense of his particular magic from this film, they would be disappointed. The whole first half of Rebel in the Rye is an utterly generic becoming-a-writer sequence. Maybe the facts of it are true to Salinger’s life, but honestly, for the first hour, I was thinking: this movie could be about anybody. Jerry’s father doesn’t want him to be a writer! He wants Jerry to get a real job, instead, so Jerry will be able to make a living. No one makes a living as a writer, Jerry! But Jerry goes to writer school anyway, because screw Dad, he’s never shown Jerry any affection anyway. At writer school, Jerry meets an irreverent, brusque-but-brilliant professor (Kevin Spacey), stumbles backwards into his good graces, and gets his life changed forever by dazzling advice like “there is nothing more sacred than story” and “imagine the book that you would want to read, and then go write it” and “you’re a writer, what do you think you should do?” Jerry writes. Jerry starts submitting to literary magazines. Jerry has a rejection-letter montage. (Yes, this film has a rejection-letter montage!) Jerry finally gets a story published, and things progress from there.

It’s not until Jerry goes to war that this begins to seem like a movie about Salinger, who famously wrote parts of The Catcher in the Rye during WWII, carrying his pages through battle. But even then, the story seems uber-glossed, an extended cliché about one of the least cliché writers of the 20th

century. He comes back from the war a changed man; he can’t write; eventually—with the help of an Indian guru—he does. He publishes The Catcher in the Rye; he becomes famous; he becomes too famous; he recedes, pushing away everything and everyone he used to love; the film ends. All of this is attended by mediocre dialogue (ironic in a movie about one of the best writers of dialogue I can call to mind), ham-fisted declarations and awkward, melodramatic voice-overs. “Publishing is everything,” Salinger’s agent tells him multiple times before, when he finally tells her he no longer wants to publish, she admits: “Publishing isn’t everything.” It’s a moment that’s clearly meant to be bittersweet and emotional; instead it’s so obviously organized, so mashed up and airplaned-in, that it’s groan-worthy.

In fact, once the film did pivot to be more specifically about Salinger, I almost wished it would go back to being an everyman writer story. The movie’s insistence on proving that moments from The Catcher in the Rye came from moments in Salinger’s life is frankly bizarre. Any reader of Salinger’s will recognize at least a few images or scraps of dialogue from his work here—the worst of these is when Jerry wanders up to a pond and asks the man standing there where the ducks go in the wintertime. Happily, the man proceeds to beat him up. You read my mind, buddy. Danny Strong, it seems, was banking on the fact that for once, he was making a movie about a book that most Americans have read. But if the movie tries to make its viewer feel smart by dropping in Holden-references left and right, it only succeeds in making itself seem dumb and reductive. To be fair, I have no idea how much of The Catcher in the Rye is truly autobiographical, but I also don’t care, because that’s about the least interesting question to ask about a novel. I agree wholeheartedly with critic Ron Rosenbaum, who has argued that the two are definitively not the same, but also that “[it’s] just so pointless to reduce the entire novel to some equation: S equals Holden minus one you-know-what.” (He’s talking about the testicle rumor.) “And it emphasizes the damage that biographical criticism can do to our ability to see a writer’s work. It’s a reading that diminishes the achievement of the book drastically.”

The film tries hard not to diminish that achievement—there is also a montage of Jerry sitting at a typewriter and ripping up pages, though at least we’re spared the visual of a trash can overflowing with crumpled pages—but I found the constant parallels drawn between Holden and Salinger even more bizarre than I might have otherwise because the film itself goes out of its way to comment on it. Salinger’s father, cowed at last, comes to him in the final moments of the film, and Jerry’s pained expression at his hushed “You’re Holden, right?” is something any writer will recognize. But how can he roll his eyes when that’s what the movie has been shoving down our throats for what feels like four hours but is actually less than two?

It’s a shame, because there’s much that could be of interest here, were it made the focus of the film or even fleshed-out successfully: Salinger’s relationship with Whit Burnett, the professor who champions him, the Holden Caulfield cosplayers who haunt Salinger’s street, the fact that the PTSD and improved writing ability apparently came hand-in-hand. The film glosses over his whole, weird religion-seeking period with a couple visits to that one guru. It mostly ignores his lurid by-mail ladykilling.

I wanted to like this movie—I want to support anything Buffy-related, and Danny Strong, whatever else he may do, is always Jonathan first, the same way that Drake is always Jimmy Brooks first. But Rebel in the Rye takes whatever Salinger was and waters him down to the archetype of the tortured genius, and then makes that archetype even more overwrought than most. Which is not good for the many aspiring writers who will no doubt see this film.

A while ago, I wrote a piece about why every aspiring writer should see Paterson, Jim Jarmusch’s excellent film about a young poet living in Paterson, New Jersey. This movie is the other side of the coin. Writers should not see Rebel in the Rye. I mean, do what you want, but if Paterson was a realistic evocation of the life of a creative person, Rebel in the Rye is the utter opposite. Not only is it filled with platitudes and lame advice, but it’s a sentimental monument to being precious about your work. The final notes of the film are actually not as stale as the rest—Jerry decides that he’s willing to be a writer for the rest of his life “without getting anything back,” and destroys every other part of his world to do so—but that’s actually the opposite of what writers should be trying to do. Now, movies don’t have to be instructive or even constructive, and I expect that most authors aren’t going to take their cues about how to live from a bad movie about a good author. It’s only dangerous because Salinger is such a salivated-over property among a certain kind of aspiring writer, Nine Stories equaled only by Jesus’s Son as the back-pocket bible of MFA programs, The Catcher in the Rye so often the book that makes kids want to write themselves. The kind of gross narcissism displayed by Strong’s Salinger is not one that should be encouraged among that set—and nor should the lazy, cookie-cutter storytelling on display here. On the other hand, it may suit as a negative example: how not to pay tribute to a literary great; and more importantly, how not to be.

At Ellis Island, Imagining My Father's Journey to America 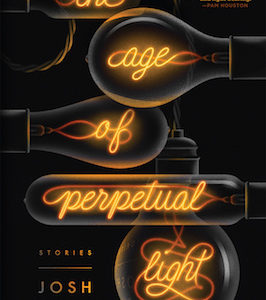 One by one the streetlamps come alight. From on my stoop, I watch: the strip of sky between the buildings, the seagulls swirling,...
© LitHub
Back to top