Eight billion people are waiting for an end to the long, long race for the presidency, and more than that an end to the clownish, chaotic destructiveness of the Trump era, but the networks and other powers that be are not calling it. They’re not because, to boil down all the elaborate evasive reasons to one: it would hurt the delicate feelings of Donald J. Trump, the would-be coup-stager and demagogue who held rallies in the run-up to this election full of people telling the rest of us “fuck your feelings,” who are with him in denial and threatening various kinds of violence.

Rush Limbaugh, Rupert Murdock, Rick Santorum, Anthony Scaramucci, Nate Silver, the people at Decision Desk, and a host of others have acknowledged that Joe Biden and Kamala Harris have won the race for the White House, and it’s been somewhere between extremely likely since Wednesday and inevitable since yesterday that Donald J. Trump can now go home. Except he doesn’t want to.

One of the striking things about American public life that bears out the rifts of radical inequality running through it is who is supposed to coddle and cater to whom. People of color generally and victims of racism in particular are supposed to consider the delicate feelings of racists who no longer wish to be identified as racists (but aren’t ready to relinquish the activity that earns the title). Women who are victims of sexual assault are routinely told to think of the poor perpetrator, and, often, of his bright future.

The Democratic Party has been, for decades, akin to a battered woman in the bad old days, when such women were supposed to try hard to understand and smooth over and placate their beater. We are supposed to reach across the aisle to find common ground with the people who view us as the enemy to be defeated and who adhere to no principle but winning. Now they’ve lost, but it’s the larger construct that makes the case that it’s long past time for a Black woman president. And we are now closer than ever before to having one.

One of my guiding principles is that your enemies sometimes estimate you more accurately than your allies do. Over and over I have seen conservatives and corporations estimate—and fear—the power of movements when members of those movements see themselves as powerless. Something similar just happened in our electoral drama. While the left saw the Biden ticket as purely moderate and mild, the right may have been stirred to turn out in huge numbers to vote against the Democrats, the platform, but also the Black woman, or to be more specific to Vice-President Elect Kamala Harris’s identity as the first Black and Asian woman and  also the daughter of immigrants. I think they may know what I have heard almost no one say. This election quite likely brought us our first Black woman president (and for that matter our first woman president). A moderate woman in many respects, but there is nothing moderate about breaking with 230 years of male presidents, all but one of them white, and all-white all-male vice presidents.

I wish Biden health and stamina on the road ahead, but he’s signed up for four years of an intensely grueling and stressful job at the end of which he’ll be 82. He’s 31 years older than Barack Obama was when he assumed office, and while he has the huge advantage of long White House experience and will surely know how to delegate, it seems entirely possible he may reach a point at which he will need to step aside. If so, Harris steps up as president. Even if that doesn’t happen, she will be the obvious candidate for 2024, since the VP is usually the next in line for the job after the president is done.

Another common pattern in US politics is that each party serves two terms before the electorate switches sides (though what the future of the Republican Party is after it has so soiled itself with Trump, Q-Anon, Nazis, some more rounds of torture, only this time of children, and the production of disasters for public health and the economy—and the demographic shift that continues shrinking its base of whites without college educations—remains to be seen).

It is 104 years since Montana voters sent the first woman to Congress, the first woman in any federal office at all (and the suffragist and antiwar Jeannette Rankin—a Republican back when being Republican meant something else—was a good person to start with). Kamala Harris was a baby in Oakland when Japanese-American Patsy Mink of Hawaii became the first woman of color to serve in the house, 55 years ago, in 1965; four years later the great Shirley Chisolm of New York City became the first Black woman in the house; and it’s only 28 years since Carol Mosley Braun became the first Black senator. Harris is, shockingly, only the second. The first Asian-American woman in the senate is Mazie Hirano, now in her second term. It has been disturbing all these years to see that the United Kingdom, Germany, Brazil, Argentina, India, Chile were all ready to elect women leaders before we were, to see that the US was so backward in this way as well.

It’s a fitting end to Trump’s reign of destruction that he is being replaced not only by Obama’s vice-president but by a Black woman.

Harris brings with her a Jewish husband who will be not only the first man but the first Jewish spouse of a president or vice-president. President-elect Joe Biden may have chosen a Black woman for strategic reasons—Black voters in South Carolina turned the tide for Biden in the primary. Black voters deserve more credit than any other demographic for winning this week’s election, as a voting bloc and especially as the key voters in the swing states of Michigan, Wisconsin, Pennsylvania and Georgia. Maybe a Black woman president will help change the ground rules about who’s supposed be coddled and who’s supposed to do the coddling, when it comes to the kind of feelings gumming up this election.

Trump was elected in a sort of backlash against a Black president, and he set about to undo and damage everything Obama had done, just because he did it. He was also ferociously misogynist, charged with 26 sexual assaults and committed to denigrating women and denying our rights, notably reproductive rights and, via the loathsome Betsy DeVos, Title IX rights on campus.

It’s a fitting end to his reign of destruction that he is being replaced not only by Obama’s vice-president but by a Black woman, and that they are passionately committed to repairing his damage—for example promptly reentering the Paris Climate Accords, which we officially exited only Wednesday but which Trump had promised to do in his 2016 campaign. Trump was not the beginning of all this trouble and racism and xenophobia, all this misogyny and human rights abuse. The Republican Party and its ardent supporters were committed to it all along, which is why the latter chose him and the former supported and justified him all through his reign of destruction only tempered by incompetence, and we got there in part through the suppression of the voting rights of citizens of color. There is a lot of cleanup to do after those four years of rampage and rage. Let it begin as soon as possible. 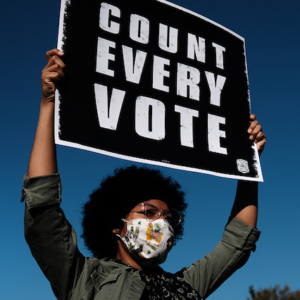 Election results for places in famous book titles. It's (almost) over. It's finally (almost) over [weeps with relief, turns off TV forever, flies kite in sunlit park]. Yes,...
© LitHub
Back to top