Today Kendra Winchester and Autumn Privett chat with Hollie Fraser and Rosy Kehdi, the founders of Books on the Subway and hosts of the podcast Ride. Read. Discuss. Over on their podcast, Hollie and Rosy interview Kendra and Autumn about the founding of Reading Women and how things run behind the scenes. Be sure to check it out!

Rosy Kehdi: We’ve met so many book-finders, people who’ve found our books over the years. We’ve reached out to them on social media and asked if they wanted to talk to us about their experience. It’s been kind of bringing Books on the Subway overground in a way. Just seeing the humans behind it, talking to them, and putting that discussion in place instead of just everything visual with leaving books on the subway and taking pictures.

Hollie Fraser: And knowing it’s doing what we initially set out to do, so many people are like, oh, I found this book I never would’ve read otherwise, and it’s sparked that love of reading again.

RK: Some book-finders we’ve spoken to were like, my god, I found this at the right time. Their career was not in the right place and it helped. Listening to all these stories, we always loved seeing them on social media, but talking to the people, having a conversation about how the book changed their life, or if it didn’t change anything and just opened their eyes to a new author or new genre—it’s been really interesting and eye-opening.

Autumn Privett: That’s really fantastic because as you’ve mentioned you don’t know who’s gonna find out, so it’s really cool that you get to talk to people and let them share their stories. What would you say is your favorite story you’ve heard from someone who’s found a book?

RK: My favorite story is the story of The Book of Joy. The Book of Joy is a book by the Archbishop Desmond Tutu and the Dalai Lama, and the woman who found the book wrote us and said she was going through a very rough phase in her life, she was very unhappy and things were not going well for her, and she found that book and she felt like it was meant for her to pick up, and after she read it she felt a lot better about what was going on with her, and it was a little bit of a bright spot in her life. So it’s definitely a story I cherish, especially because it’s a book about being happier, and the fact that it changed that woman’s outlook on life at the stage where she was at makes it a great story. 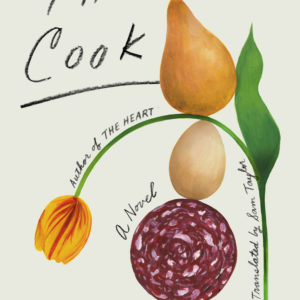 Berlin Doner Kebab A train moves toward Berlin. It speeds through wide-open spaces, past smoking fields. It’s fall....
© LitHub
Back to top