Stephen Langlois on How the Location Shaped His Reading Series, BREW

Like any artist in New York City—or anywhere, really—I know never to turn down an opportunity. Say yes. Figure the details out later. As the manager of one of four Hungry Ghost cafes, a mainstay on the Brooklyn coffee scene, I try to fit my writing career around obscenely early hours and on days off when both body and brain would likely prefer slumber to my laptop’s glare. I’m fortunate, however, that my bosses at Hungry Ghost see me as more than a mere latte-dispensing drone, and when Justin Boshell, co-owner, asked one day in the fall of 2015 if I’d like to put on a literary event at the café, I said yes.

First, a name for the series. BREW came to mind with a certain immediacy. BREW suggested coffee but also a concoction, an infusion, and a mixture of dissimilar elements—in short, a manifestation of the alchemy of artistic gatherings. Next, I needed readers. I sent invites out to friends, including my pal Bud Smith who was kind enough to suggest some other writers to consider. A good start, but something told me that if I didn’t reach beyond my own circle of friends—and friends-of-friends—this series could easily become a homogenous, self-congratulatory group affair featuring mainly straight white guys.

Thank god for social media. In certain cases, anyway. Facebook and Twitter make it almost absurdly easy to get in touch with writers whose work you’ve admired from afar, and I reached out to readers whose experiences were likely different than my own. Then I had a lineup, and, after a month of planning—exchanging emails, setting and resetting dates, designing posters, and posting an event page online—the inaugural reading took place on October 29, 2015.

I think the juxtaposition of disparate works and writers is one of the great pleasures of public readings. That night Bud shared a story about his brother, so obsessed with the 1985 horror flick Silver Bullet—particularly the rocket-powered wheelchair in which Corey Haim flits about—that he made multiple attempts at severely injuring himself in hopes he might receive his own rocket-powered wheelchair. Bud didn’t look at the typewritten pages he held, but told the story as a friend might—loose and casual—a decision which quickly set a communal atmosphere for the evening. Poet Elizabeth Murphy had us leaning into her work, concentrating on every line, parsing each phrase. Victoria Cho read about a first-generation Korean-American woman who finds herself called into play on the soccer field after spending the season benched and almost immediately breaks her wrist. We were all made to contemplate identity in a way many never had before. Bill Lessard shared a semi-autobiographical tale of a young boy and the drunken antics of his father before switching things up entirely, reading a poem written just days prior entitled “Lines After Seeing the Trailer for Star Wars: The Force Awakens.”

In many ways, BREW’s inaugural event set the tone for what was to come. That first evening we went without mic, amp, or podium—equipment typically part of readings—since I didn’t possess such things and the café didn’t provide them. Later, I decided against using them, since at roughly 800 square feet, the café is small enough that any reader with the ability to project and enunciate can be heard, though there’s more to it than acoustics. Put a mic in the reader’s hand and a formality descends—the reader’s voice is louder, stricter, ceremonial. The audience is suddenly straight-backed and rigid in that way many of us have been conditioned from the first time a vice-principal’s voice reverberated across the school gym. Without a mic or podium, the atmosphere takes on an ease and spontaneity. There’s an intimacy about an artist in front of an audience, unconcealed and unencumbered.

Remember, BREW takes place at a café: Not your typical venue for a literary event. The café isn’t like a bookstore, for instance, where most people enter, even when no book-signing is scheduled or magazine launch transpiring, with a willingness to be enthralled. Nor is it like a bar, where many are predisposed to talk and listen, in the sort of communication—drunken or not—intrinsic to readings. A venue like BREW’s has certain limitations.

This is a place where folks sometimes come in off the street in the middle of a particularly poignant stanza, dazed, uncaffeinated, and confused by the blitz of poetry. A tired parent might wander in, searching for a cookie or doughnut to placate the exhausted children trailing behind them, which is what happened during BREW III when Darley Stewart was deep into an especially graphic passage from her story “Polaroid of a Man In Love” about a sociopathic sex-addict. Darley paused, laughing. We all laughed along with her. The disoriented mother laughed. I explained what was going on. The mother bought some sugary treat, her two children followed out behind her, and Darley resumed, her story somehow all the more powerful for having been interrupted by this unsuspecting trio.

If BREW was too inflexible in structure or self-serious in tone, or in some other way attempted to overcompensate for the limitations of its venue with an abundance of rules and regulations, incidents like this could derail an entire event. Instead, they often lead to BREW’s most memorable moments. Pretty much anything goes, and readers and audience alike go along with it.

The owners of Hungry Ghost put little pressure on me regarding sales—a factor organizers who rent venues for such events often contend with—simply happy for the literary community which has grown around BREW and the café itself. I’m free to do what I want. I begin each event by sharing a short piece of my own to gradually pull the audience’s attention away from their phones or books or friends with whom they’re chatting so they’re fully primed to listen by the time the first guest is introduced.

Beyond this, my job as curator and host is to showcase the emerging writer as much as the established. My other main duty is to remain focused on diversity, an issue which bears repeating over and over until someday, hopefully, it never has to be spoken of at all. BREW has been and always will be a safe and inclusionary space for readers of every race, gender, and sexual orientation. In my year as curator and host I’ve come to truly understand it’s our differences as artists, as well as the unexpected appearance of common ground beneath our feet, that not only make a series like BREW exciting but—better still—worthwhile. As for what BREW’s second year holds, I don’t know myself. I’m open to any possibility. Bring me an idea and I’ll likely say yes. We can figure the details out later.

Stephen Langlois’s work has appeared in Glimmer Train, Maudlin House, Monkeybicycle, and Split Lip Magazine, among others. He is a recipient of The Center for Fiction’s NYC Emerging Writers Fellowship as well as a Blue Mountain Center writing residency. In addition to hosting BREW, he serves as fiction editor for FLAPPERHOUSE. Visit www.stephenmlanglois.com.

From Imbibing Spirits to Spiritualist Mediums 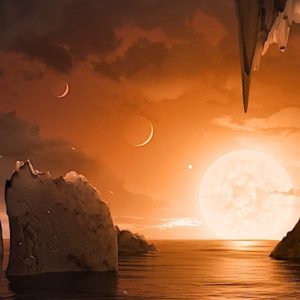 Yesterday, NASA announced the discovery of a system of seven Earth-size planets, clustered around a star, three of which...
© LitHub
Back to top