“Reader, I Married Him”: An Interview with Tracy Chevalier

“Reader, I married him” is one of the most famous lines in English literature, and justifiably so: When Jane Eyre tells us that she has wed Mr. Rochester, it may be a happy ending for Charlotte Brontë’s novel, but it’s hardly a conventional one. Rochester, who has seen his first wife fall to her death from the roof of their burning house and has himself wound up blind, is a shadow of his former imperious self. The once-homeless Jane takes on the role of caregiver rather than grand chatelaine.

April 2016 marks the bicentennial of Charlotte Brontë’s birth. Tracy Chevalier, the author of nine novels (including Girl with a Pearl Earring and Burning Bright), loves Brontë’s Jane Eyre so much that she decided to pay it homage by putting together an anthology of short stories inspired by Brontë and her characters. Although the title of Chevalier’s anthology is that famous line, her fellow writers take their themes, plots, and characters from many different aspects of the iconic novel. I spoke with Tracy by telephone from her London home (she is married to an Englishman, with whom she has a son) about the project, its contributors, and what an African village might share with Thornfield Hall.

Bethanne Patrick: The first line of the first story (“My Mother’s Wedding” by Tessa Hadley) and the last line of the last story (“Robinson Crusoe at the Waterpark” by Elizabeth McCracken) pack a wallop: “It was never going to be an ordinary kind of wedding” and “’Marry me,’ said Bruno, galumphing in.” Was that deliberate?

Tracy Chevalier: Yes, you noticed! I spent a lot of time with the stories all over the floor, looking at them, putting them in order, changing their order… Some of them are very directly inspired by Jane Eyre, others less obviously so. The moment I read Elizabeth McCracken’s story, I knew it would be last. It’s very modern and far from the source, but there’s something wonderful about it that’s very celebratory about marriage. I decided to put Tessa’s, another marriage, at the beginning.

There’s a lot of tweaking that goes on in editing a collection like this—a lot of movement. I had a great time as an editor; I love the process. Before I started writing, I was a reference-book editor, so I broke out those old skills I developed 20 years ago of contacting people, drawing them in to a vision, things like that. Most of the writers were delighted to be edited, and we had a lot of fun batting the stories back and forth. A couple of the writers were surprised, although not in a bad way. More like: “People don’t normally edit my stories!” I believe that writing isn’t finished until a reader has read a piece and said, “Yes, I understand this.”

BP: You’re a contributor to the anthology, too.

TC: Originally, I wasn’t going to write a story, but a couple of my contributors pressured me into it—again, not in a bad way! I’m actually glad I did it; not only did I have a lot of fun writing “Dorset Gap,” but it helped me with the whole process, with remembering that the bigger picture of a collection is made up of individual pieces.

BP: What draws you to Brontë’s great work? To its protagonist?

TC: I first encountered Jane Eyre in college, as an English major at Oberlin. I remember being really taken with the romance between Jane and Rochester, which is unbelievable and yet believable at the same time. It’s so satisfying to have him fall in love with her, and it’s a happy ending even though he’s much reduced. But I think, even if it’s a kind of qualified happy ending, that it means something to readers because Jane has grown. I was enamored of her character, and that’s what’s stayed with me. That’s what makes the book, in the end—not the moors, not the orphanage, but how Jane remains strong and determined and very much herself no matter what is thrown at her. The novel is a sort of life lesson in watching a woman grow.

BP: The Charlotte Brontë Bicentenary is significant in large part because Jane Eyre is such a revolutionary, important work. What makes it so?

TC: Jane Eyre is one of the first novels in the first person, for one thing. She’s the first heroine who speaks in the first person, rather than having a somewhat distant, condescending, omniscient narrator tell us her story. This means we get to know her much better than, for example, Austen’s characters, who are always kept at a remove by their narrator. With Jane, you have much more at stake as a reader because of the immediacy. She uses this wonderful device of bringing the reader right in, which is so powerful. You’ve gone on a journey with Jane. You have much more at stake, emotionally, than with many earlier novels.

The other side, which cannot be ignored, is women’s social lot from Brontë’s time to our own. When she wrote Jane Eyre there were very few successful women writers. She came out of nowhere, and she showed us how to do it, that you can come from obscurity and have no privilege or connections and still write a masterpiece. One of the reasons I approached only women writers for this collection is because we, as women, are particularly in debt to Brontë as a trailblazer.

BP: Some readers might see an anthology of stories based on Jane Eyre and expect a collection of staid, Anglophilic set pieces—yet Reader, I Married Him is quite the opposite. In fact, at least one of the stories was in a voice and from a perspective I’d never seen or heard anywhere before.

TC: I know, I know, Nadifa Mohamed’s “Party Girl”! She’s amazing, of Sudanese origin, and a phenomenal writer. I was looking for different takes on the idea of marriage and relationships, and I had really liked her novel Black Mambo Boy. I thought she might bring something different to the project. I could easily have asked 20 white English female writers of a certain age, and I could have filled up the book several times over. But no, the whole point is that the book can and, I hope, will be, appreciated by a lot of people all over the place. After all, Jane Eyre is one of the most popular books in Japan! If you go to tour Brontë country, you’ll notice that the signs all have Japanese translations on them. There’s something for everyone in this volume, and the tone is all over the place, in what I hope is a kind of wonderful way.

BP: We’ve talked about the first and last stories. Were there other “pairings” that spoke to you?

TC: I think the pairing of stories that I found the most astonishing, really, is “Grace Poole Her Testimony” by Helen Dunmore and Sally Vickers’s story “Reader, She Married Me.” I got Helen’s in first, then Sally’s, and wrote to them: “You have got to read each other’s stories!” They both rake Jane over the coals, which is very brave to do, but in both pieces we’re reminded that there were other characters in Jane Eyre too.

In the live readings for the book, I’ll be taking advantage of these juxtapositions. At its first event, which will be on the Brontë Parsonage in Yorkshire, Audrey Niffenegger and Namwali Serpell will read their stories back to back. Both stories are in such different settings from the Parsonage: Audrey’s is kind of futuristic and Namwali’s takes place in an African village. But, you know, one of the things I loved about Namwali’s story is that such a village is as remote in its own way as Thornfield Hall would have been 200 years ago.

BP: The stories are so very different. Do they have anything in common, besides their inspiration?

It gives me a more complex vision of what marriage is. It would be great if Jane Eyre herself could read this collection! I think she is going into that relationship with her eyes open, but this would really open them up to the emotional trickiness of marriages. It’s not happily every after; it’s realistically ever after.

BP: You’ll be live in Manhattan at Symphony Space this month. Why is it important to read in front of audiences?

TC: Work is always different when it’s read aloud. The listener has a different experience than the reader; it’s more interpreted when it’s read aloud. There are advantages and disadvantages. You can’t take your time; that’s a disadvantage. But you have prose brought to life that might otherwise be skimmed over, and that’s an amazing advantage. It’s a great privilege to have stuff read aloud. When somebody else reads my work, they’re never reading it the way I would, EVER! I have to let go of it and let it become someone else’s. That is part of the process.

These stories sort of stand up on their own; it’s quite something. I found it very surprising that there was a kind of negative take on Jane in some of them, but I appreciated it. Jane Eyre the character is not perfect, and reading these other writers’ versions of Jane made her more rounded for me.

BP: And for others like me, too—which will make others wonder if you plan on, say, a collection inspired by Wuthering Heights, or The House of Mirth?

TC: [Laughs] This book is a one off! It took so much time, that even though I loved doing it, it took a lot of time, and I’m eager to return to my own fiction. That said, I’m always stretching myself. Watch this space!

NB: Tracy Chevalier’s ninth novel, At the Edge of the Orchard, is out this month from Viking Books. For more information, check her website.

When Your Life is in Someone Else's Hands: A Reading List 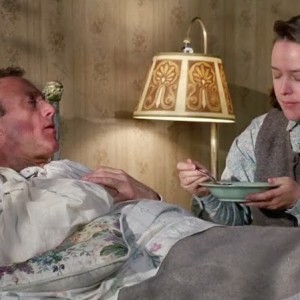 When Your Life is in Someone Else's Hands: A Reading List

If you’ve never been dependent on another person for the most basic daily tasks, count yourself fortunate—and assign...
© LitHub
Back to top