Who dares utter the word “hope” these days, when we’re exhausted by the buffoonery emanating from the White House hourly? The ever-audacious and ever-timely Anne Lamott does. In her latest book, Almost Everything: Notes on Hope, the best-selling author does what she does best: excavate nuggets of hope without sounding Pollyannaish. Can we learn from her how to resist not just odious politics but personal bitterness? Is humor too trivializing for these bleak days? Will a phone conversation with her teach us how to pledge ourselves to do what she quotes Wendell Berry as doing: [to] “be joyful, though you have considered all the facts[?]” We spoke to her as she embarked on her book tour.

Daniel Asa Rose: We’ve been hearing your chief message—about the many reasons for hope and even joy despite the world’s manifest perils—through 18 books now, and we’re always amazed how you keep it fresh.  What’s freshest about this new one?

Anne Lamott: Most every book on the bestseller list [these days] seems either explosively angry or full of hate hate hate toward Trump and/or liberals. Then I come along with my little book of hope like a slightly cranky Teletubby. That’s fresh. Maybe it’s a little bit absurd—the very idea that in this vale of tears with a crazy person at the helm who has turned our country into a fever dream, that someone wants to make a heartfelt case for hope. That could qualify as fresh. Maybe even radical.

DAR: Maybe even crazy. How’s your brain holding up at 64?

AL: [laughing] Some days better than others. I do best when no one is there to notice the ravage. My 29-year-old son Sam spends a lot of time on the internet researching a senior care placement program called “’A Place for Mom.” He’s always saying, “Look mom, this one might even let you keep a little dog!”

DAR: But seriously, are you at all close to needing some sort of senior care?

AL: Not very, although it depends who you ask. If a doctor said I had early onset Alzheimer’s or a brain tumor, a lot of things would fall into place. The worst it gets is putting on two black shoes that don’t match. We have a stacked washer-dryer unit and it seems like every time I have an armload of wet clothes I bang my head on the bottom of the dryer. I’m thinking of inventing a laundry helmet.

DAR: So once again you’re doing what you’ve done throughout your career: turning a negative into a positive, or at least a semi-positive. How do you do that without sounding over-earnest, like Little Miss Optimist?

AL: I can be dark. And caustic. And scared. People expect me to be Miss Nancy from Romper Room handing out band aids and apple juice, which is definitely part of the mix. But someone needs to talk about all this stuff that’s tromping around scaring us to death. Besides, this book is not only about hope. There’s a lot of anger here, too. Some patches are really furious.

DAR: And there’s hatred here, too. I confess I didn’t expect hatred to figure so prominently in these pages. Nor your ability to “enjoy” hate, and to express how both addictive and comforting it can be.

AL: A few years back I had a rivalry with the Dalai Lama. Purely one-sided, of course. The battleground was the Amazon sales rankings. I was envious that we both had books out at the same time. He had such an advantage. He has a billion followers. I got over it, mostly. But I enjoyed it while it lasted.

“I wake up not knowing if our leader has bombed North Korea. And still, this past year has been just about the happiest of my life.”

DAR: And let’s not forget about hurt, which also lurks behind many of the pages. You say in the book that you don’t want to dwell on it. Actually, what you say is “Ix-nay on the urt-hay. I have hurt plenty; I’m good on hurt.” Yet you handle the subject so lightly it never feels like self-pity. Sometimes you make a joke out of it.

AL: We need laughter in our lives. Laughter is carbonated holiness. It’s like the cavalry arriving to help us get our sense of humor back.

DAR: You even have the courage to be corny. I’m thinking of your quip that sounds like a Phyllis Diller or Joan Rivers type line: “Scientists say we are made of stars, and I believe them, although my upper arms look like hell.”

AL: The copy editor kept taking that out, but I like it because stars are the most sacred image, yet we live in our bodies, and maybe some of us forgot to go to the gym after the baby was born, 29 years ago.

DAR: It’s borderline to me, but I’m glad the copy editor didn’t cut it. Your humor is one of the secrets of your enduring popularity, I’m sure. You have the ability to be profound and still breezy.

DAR: One of my faves, too. Breezy may be what keeps a certain kind of reader from sniggering at lines they might otherwise find precious. But to be able to bare your heart to a cynical world and not have people snigger, or not care whether they snigger or not, that’s a gift.

DAR: Another gift is the poetry you manage to smuggle into your prose. For instance, there’s a moment when you talk about friends who have died. You don’t merely say they’re near and far at the same time, you say they’re “like candles in another room.”

DAR: I guess you believe we’re more resilient than we give ourselves credit for. You have that line: “I wake up not knowing if our leader has bombed North Korea. And still, this past year has been just about the happiest of my life.”

AL: I have faith in goodness and grace and the minuet of deep friendships. When I can surrender the controls of the spaceship, insight follows. I can’t think my way into not being terrified but I do the next best thing and that’s to let go. [beat] This is interesting. Have you noticed? We’ve got so many topics in the air right now.

DAR: Is that ok with you?

DAR: You certainly have a way with epigrams. There’s one you said earlier: “Laughter is carbonated holiness.” And in your book you say “Hope is the sunny side of control.” I’m not even sure I know what it means, but I like the rhythm. Do you make them all up yourself?

AL: Most, but you have to understand I’ve been in recovery 32 years. People who are doing the deep dive into sobriety and restoration say these great things. All writers are thieves and parrots. I paraphrase.

DAR: So is it safe to say that one of your tasks on earth, as you see it, is to tell the best truth you can come up with, and by so doing provide a kind of companionship to your readers?

AL: Yes. We’re all in the same boat. It’s a relief for people to hear a little truth, or the best truth I know. There’s so little truth in the popular culture, and even sometimes in our own families. I celebrate that we’re all crazy and damaged and we’re all sort of floundering and flailing, and yet we stick together. We take care of each other the best we can. And that is so touching it fills me with hope. It takes people a lot of decades to realize that we’re all in the same boat, dealing with death and Trump and upper arms. And we’re more or less ok, most of the time. And that’s kind of a miracle.

Daniel Asa Rose has served as arts & culture editor of the Forward, travel columnist for Esquire, and book reviewer for the Washington Post. His latest book, Larry's Kidney, is slated to be a movie directed by Richard Linklater.

5 Great (and Weird) Books You May Have Missed in October 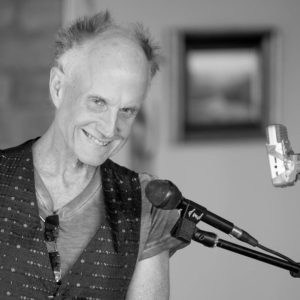 Tony Hoagland was committed to writing the American lyric, and mostly, and more specifically, the lyric of the white American...
© LitHub
Back to top