A Poet Committed to Exposing the "Lostness of Men"

Tony Hoagland was committed to writing the American lyric, and mostly, and more specifically, the lyric of the white American male. His persona was often cast as the loner, happier walking away from the party into the vast impersonal night, accompanied by the ever more indistinct laughter and talk of his friends. The man who spoke in Tony’s poems was uncomfortable with love, domesticity, with staying put—addicted to the impulse toward what he called sweet ruin—how with one gesture he might experience his dread not as fear but as power. He could wreck things; it was that simple.

These poems were often laugh-out-loud funny, syntactically elegant, and so riddled with deliciously extended similes, one might emerge from the labyrinth of their making as from Tom Sawyer’s cave, blinking a little, a little more undead, and possibly unaware that the poem has been critiquing what it has been expressing all the while.

Tony Hoagland was committed to letting the shadow out of the box—to exposing the loneliness and lostness of men, and the violence that almost inevitably erupts when the nerve of that loneliness is exposed. I wanted to punch her right in the mouth and that’s the truth.

He might have stalled there, but in the last books, without losing any of the humor that made his poems so accessible (and popular), the poems begin to insist on the catastrophic effect of male dread. Tony Hoagland writes a poem called “The Change” in which his speaker enacts his own racism; he writes ”Cause of Death: Fox News” where the old male, having refused vision, begins to glimpse the end of his reign of terror; and finally he writes “Peaceful Transition,” a poem soaked with grief for what men have done to the living world, a grief that finally disables the rage that has created the absolute catastrophe.

Tony Hoagland tore into subjects that are not comfortable. Many think he blundered. He was not an apologist, not ever. Many believe the speaker in his later poems was Tony Hoagland himself: of course it is; of course it isn’t. He wanted to see into the shadow and to expose it. He did that, and in doing that he did what few of us are willing to risk or endure.

Of course there is a time of afternoon, out there in the yard,
a time that has never been described.

with their dark, leathery-green leaves.

There is a gap you never noticed,
dug out between the gravel and the rock, where something lives.

There is a bird that can only be heard by someone
who has come to be alone.

Now you are getting used to things that will not be happening again.

Never to be pushed down onto the bed again, laughing,
and have your clothes unbuttoned.

Never to stand up in the rear of the pickup truck
and scream while blasting out of town.

This life that rushes over everything,
like water or like wind, and wears it down until it shines.

Now you sit on the brick wall in the cloudy afternoon, and swing

happy because there never has been a word for this

not to measure anything.

Marie Howe is the author of four books of poems. Her most recent, Magdalene, is forthcoming in March from W.W. Norton. She was New York State poet laureate from 2012 to 2014.
Share:

Simone de Beauvoir: "How Many Bland and Dull Escapist Novels There Are!" 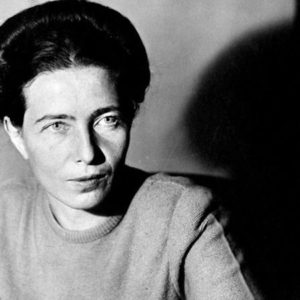 Simone de Beauvoir: "How Many Bland and Dull Escapist Novels There Are!" Today the expressive arts are not the only ones open to women: many try their hand at creative activities. Woman’s situation...
© LitHub
Back to top
Loading Comments...