Rajpreet Heir on How Things Have Changed at an American Institution

I was born and raised in Indiana and have gone to the Indianapolis 500 five consecutive years now. I go with my family and friends of the family, a group of about 30. Half are Indian and most of the rest are white. The morning of the race, we drive across town and park in a neighborhood bordering the track. Specifically, we pay to park on someone’s front lawn. According to the men who’ve been parking there for over 30 years, the house used to be owned by “Crazy Dan” who “could eat a piece of corn on the cob through a picket fence because his teeth were that jacked up.”

This year, the walk to the stands is much faster than usual because the 500 is about to start and everyone is already in their seats. Security is beefed up more than I’ve ever seen: tickets are scanned; helicopters hover overhead; men in white polos move through the crowds. An Ariana Grande concert was bombed in Manchester the week before, and Mike Pence, a Hoosier who’s gone to the race 30 times, is in attendance today.

Had we arrived sooner, we would have seen him take a lap around the two-and-a-half-mile oval track in his motorcade. As he made his way to a suite, Rachel Platten’s hit “Fight Song”—which was used as Hillary Clinton’s campaign anthem—played.

Politicians aren’t usually welcomed at the race. In April 2011, Indianapolis Motor Speedway officials announced that Donald Trump would drive the pace car for the 100th anniversary of the race. The choice prompted a backlash from those upset about his increasing political involvement and racist remarks about President Obama—especially his demands that Obama produce a birth certificate proving he was born in the US. After a month, Trump withdrew from his on-track duties, saying he was too busy, though it’s assumed he was let go.

I’ve also taken a lap around the track on the morning of the race, but I was sitting on a pace car as a 500 Festival Princess. Each year, 33 college-aged women are selected by the festival and serve as ambassadors of the 500 Festival, their hometowns, and their schools. I remember feeling disoriented, not knowing what part of the track I was on, and not fully comprehending just how expansive the stadium is—with 257,325 seats and 253 acres of infield space that push attendance over 300,000. On one of the turns, a frat-tastic fellow yelled, “You’re sooo exooticcc” at me. I know I should have been offended, but back then in 2012, it made me laugh, and I still laugh about it now.

Today, Taps plays as we find our seats at our usual spot at turn three. There’s a fat man in a tiny black bikini top, a shirtless man wearing a feather boa, jorts aplenty, and a Reagan/Bush ’84 tank. My shirt features a hefty cat perched on a giant hamburger in a green galaxy of other smaller orbiting hamburgers. Down a few rows is an older man who, every year, wears a shirt that says, “Suck Poop.” Once we’re settled, he yells, “Suck poop!” and we yell it back in unison. It’s tradition.

After the National Anthem, flyover by a B-52 Bomber, and singing of “Back Home Again in Indiana,” the drivers are instructed to “start their engines,” which I take as a cue to shotgun a beer. I stab the can with my New York City apartment key. I’ve lived in New York for nearly a year now and when I come home to Indiana, I’ve started thinking harder about how strangers react to me. I don’t know if some of their reactions have always been colder; if I’m more sensitive to it now that I live in a diverse city; or if this is just Trump’s America.

After a couple of warm-up laps, the cars begin humming past at over 200 mph and everyone is on their feet, cheering, transfixed by the blur of bright colors. There’s really nothing else like it and watching on television is nothing compared to the real deal. Talk about mesmerizing. At our turn, we can see the cars approaching and disappearing, and the speed at which they zip by makes it easy to forget that there’s someone in the drivers’ ears talking them through their decisions.

At lap 53, Dixon and Howard collide at turn two, sending Dixon’s car airborne and he lands with his wheels facing up. The race is stopped for 18 minutes, then a caution flag flies, which means the cars circle slowly, maintaining position. If you know anything about the 500, you know that caution flags are bathroom break opportunities.

The pathway beneath the bleachers is covered in chicken bones like some sort of apocalyptic ruin. Beyond the bathrooms is a golf course, where men and women are passed out on hills, speckling the landscape with their heavy bodies. A group of kids play golf on the practice green, using their bare hands since they don’t have clubs. Another group watches as one of their friends tries to run up the side of a steep bunker again and again. One says to me, “You want to make $20? Get this guy out of the bunker. He’s a pussy.” They are preteens.

The bathroom is busy; I count 75 women, all white except me. In my stall, a blue card on the toilet paper holder reads, “BIG QUESTION: If you were to die this minute, do you have the assurance that you would go to heaven?” On the back, there are Bible quotes, instructions to repeat the prayers from my heart to others, and space to fill in contact information.

As I return to the stands, studying the card, a Natty Light can drops from up above.

Nine people sitting a few bleachers below us toast miniature Fireball bottles. At lap 66, Daly crashes into Kimball and slams into the wall at turn three. The sparks spray from beneath his car and warm my face. The car’s momentum keeps it sliding forward a considerable distance, smoke following.

During the caution flag, one of my female relatives readies a selfie stick for a picture and a large middle-aged white man several rows back angrily yells, “Selfie sticks are illegal here!”

It’s not a true statement, but it’s an awesome comeback and makes me wish I was as deft as him at handling questionable comments or situations.

The day before, at the 500 Festival Parade, a man had stared my family down as soon as we arrived. For once, I decided to stare right back at him, maybe because I was taller than him. But then, a marching band passed and I got distracted, excited, as one does at a parade. When I glanced back, he was still staring and I nodded at him.

The previous Thanksgiving, 15 days after Trump had been elected, I’d received more than one stare at an annual charity road race in a cultural district just outside of downtown Indianapolis. I had arrived late and as I walked to the end of a very long line for the bus that takes everyone to the race’s start, I realized many of the people in the line were giving me unfriendly, even threatening looks. At first, I looked back at them, challenging them. Wasn’t I a Hoosier too? Hadn’t I gone to high school a couple miles from where we were standing? But the length of the line overwhelmed me, and after a while, my stomach turned and I kept my eyes on the ground.

Soon there are 10 laps remaining, with everyone standing to watch lead changes among Chilton, Sato, Jones, Castroneves, and Hildebrand. Sato takes a lead with five laps remaining that he doesn’t relinquish, making him the first Japanese driver to win the Indy 500. Second place goes to Castroneves of Brazil.

Though quintessentially American, run annually on Memorial Day, the 500 usually has international racing talent—for this race, 20 of the 33 drivers hail from countries other than the US.

My twin brother and I discuss this on the way out of the track. “Compared to other sports, I think auto racing is less racist.”

“Everyone stands up to cheer for the winner at the end, no matter who they are.” It was true, everyone had taken off their hats and clapped for Sato as he did his victory lap. “Same with Kanaan,” my brother continues. “He’s from Brazil and that doesn’t stop people from rooting for him.” Kanaan, who won in 2013, is a crowd favorite.

After we pass kids selling a $1 shortcut through their backyard and other kids charging $1 to shoot water guns at people, my cousin strikes up a conversation with three college-aged white guys. One of them says, “I’m still butthurt that a Japanese man won. At least it wasn’t Castroneves though. He doesn’t pay his taxes, but everyone still likes him because he can dance the mambo.”

Turns out the guy is far from alone in his racism—over the next few days, people will write racist comments on Sato’s team’s Facebook page, and Terry Frei of the Denver Post will tweet that he was “very uncomfortable with a Japanese driver winning the Indianapolis 500 during Memorial Day weekend.”

About an hour after the race has concluded, the inclement weather that everyone had been warned about finally arrives. This happens just as traffic finally begins moving. Fans were instructed to bring ponchos, to carefully monitor weather bulletins, and there’d been talk of the time 20 years ago when the race was pushed back two days because of storms.

I’m sitting in the backseat and resting my head against the window when the sky darkens and the rain pours down so heavily that I can’t even read the store signs outside and I can’t hear the radio. Part of me is moved that the storms held off just long enough for everyone to leave the track and another part of me is relieved to not have to see or hear anything at all. The gray road blends into the gray buildings into the gray sky and for a little while I can relax into myself.

Rajpreet Heir is a writer based in New York. Her recent work has appeared in The Atlantic, Cosmopolitan, The Normal School, The Washington Post, and The New York Times. She holds an MFA in Creative Nonfiction from George Mason University.

Writing in the Shadow of a Masterpiece: On Homage 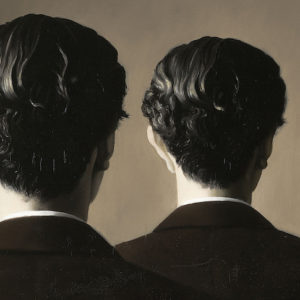 Writing in the Shadow of a Masterpiece: On Homage

“Neither a borrower nor a lender be; For loan oft loses both itself and friend, And borrowing dulls the edge of husbandry. –Polonius,...
© LitHub
Back to top