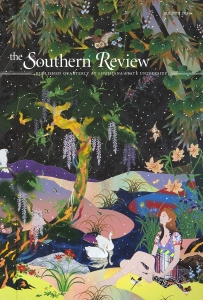 The following is excerpted from Genevieve Plunkett's short story called “Prepare Her” which is featured in the Autumn 2019 issue of The Southern Review. Genevieve Plunkett’s stories have also appeared in the New England Review, Willow Springs, and the Massachusetts Review.

“The girl has to go,” Rachel tells the school. “Doctor’s orders.” This last bit is not a lie, although it feels like one, maybe because Rachel has never said “Doctor’s orders” in her life. There is also something questionable—rebellious even—about the idea of keeping her daughter home when she is not contagious.

“Poor thing,” says the school’s director. “We’ll be thinking of her. We’ll be sending her positive vibes.”

“Yes. I will let her know,” Rachel says, and, as she hangs up the phone, she decides that she will indeed tell her daughter this. She has tried every method that she can think of—prunes, warm baths, hot drinks, promises of chocolate chips and sodas. There have been scare tactics, which Rachel regrets—threats of having to go to the hospital, of complicated, invasive measures. She might as well let her daughter know that her whole preschool is rooting for her. Bianca will not be embarrassed by this, Rachel thinks, or it might just be that Rachel has forgotten that shame is an opportunist, its means subtle and unfair. Rachel has forgotten that when she was Bianca’s age, she watched her mother drop an egg on the kitchen floor. It landed with a slap of yellow, leaving a thin, snot-like thread across the toe of her shoe. This had filled her with humiliation, as if the thing had come from her own body, like some kind of unsightly discharge that was beyond her control. She began to cry and then to wail, and her mother did not know what to do with her.

“I don’t know what to do with you,” she said. Rachel’s sorrow was unrecognizable, alien, dysfunctional. It had no place in her mother’s heart.

Bianca is on the couch nibbling a piece of celery. The television is showing some kind of nature program. A volcano erupting. Veins of bright orange lava against a matte-black earth.

Rachel has been living with her mother now for six months, ever since she and her husband separated.

“I would just walk around the lava,” Bianca says haughtily. The celery hangs from her mouth. She has not actually ingested any of it, but has only bitten the tip into a wet, stringy mess.

They have been to the doctor, who has suggested things like making “poop muffins,” with bran and psyllium husk—simple, wholesome measures that Rachel is certain they are now beyond. Bianca has been refusing the toilet for five days. The pain comes in sharp, urgent waves and still she refuses, clenching her fists, dancing on her toes, anything to keep herself from going. This has become a psychological struggle, Rachel realizes. The solution is somewhere in her daughter’s head, which is already, at four years old, filled with strange, fiercely sophisticated ideas. On the television, a scientist in a fire-resistant suit pokes a stick into one of the lava flows and pulls it up, slowly, as if he is stretching taffy. It does look harmless. It all looks so slow and harmless.

Rachel has been living with her mother now for six months, ever since she and her husband separated. Rachel’s mother is hurt and perplexed by the separation. It was entirely Rachel’s fault. It was not toxic and voluminous like her own divorce. There is nothing impressive and darkly human and novelistic about the way her daughter’s relationship has deteriorated. It simply ended, without mystery or confusion. A waste. An unforgivable waste, she thinks. Rachel herself is not pleased with the way things have turned out. For one, she wishes that her mother’s house were not so far away from town. She feels helpless out here, buried in snow, beneath the creaking trees, the steep, forbidding face of the mountain. She keeps forgetting to buy things at the grocery store, ingredients that slip her mind during the 30-minute drive. When she arrives back and remembers that they are still out of peanut butter, or baby carrots, or dish sponges, she feels a sort of desperation, like she is starving. She opens bags of potato chips, thrusting her arm noisily inside while setting groceries on the shelf. She can’t stop. They are starving out here.

Rachel writes for a magazine, which was fine while she was living off her husband’s income. She felt a rush of false opulence whenever she opened a check, this marvelous piece of extra money that represented her independence, the heroism of late-night multitasking. But now she knows that it is nothing. She has just finished writing an article about coffee, how it does not pair well with fruit. She had to contact experts on the subject, experts with head shots that were somehow both angelic and murderous. They told her that coffee did not taste good with fruit. She had written the article despite being sick and having to care for Bianca, who was also unwell—most likely the flu, the doctor said, but knowing for sure won’t make a difference in how I treat you. Knowing won’t make a difference in how you feel. Yes, thought Rachel. It will. But she took Bianca back home and they wrapped themselves in a blanket on the couch and when her mother returned from her job at the hospital and walked wearily across the living room, dangling her keys, Rachel called out, “We have the flu!” Because it would make a difference to her mother.

It occurs to her that Bianca has reached a degree of suffering that has made this resolve possible.

It is not just the separation that Rachel’s mother disapproves of. When she is at home, she holds a constant, irritable vigilance. She opens the refrigerator and peers inside, challenging its contents, shaking the milk carton, peeling open the lid to the yogurt to check its level. She steps over toys left on the floor with great, elderly sighs. At the table, she quizzes Bianca on hypothetical moral dilemmas.

“If you had four chocolate chips, but Nana only got two, what would you do?”

“I would build a wall around my chocolate chips so you didn’t see. So you didn’t feel bad.”

There is something that Rachel hasn’t tried, something that she has been avoiding. The doctor advised letting the child do it herself. At four and a half, she has the dexterity, said the doctor. Dexterity. It is a clean, mechanical-sounding word that does not take into consideration her daughter’s stubbornness, her skepticism, her outrageous, practically feral imagination.

“I have something that might help,” she says, switching off the television. She clasps her hands together, fortifying herself against her daughter’s insulted objections.

But Bianca is not insulted. In fact, she is surprisingly eager to try. Rachel watches a mature and businesslike hope settle across her daughter’s face as they walk, holding hands, to the upstairs bathroom. It occurs to her that Bianca has reached a degree of suffering that has made this resolve possible. She, a child who won’t even try a new flavor of ice cream for fear that it won’t be her favorite, will do this strange, unheard-of thing, because she wants to stop the pain. Rachel feels this reality seep into her chest like a leak, warping and blistering a wall—the damage of another small heartbreak.

In the bathroom, Rachel takes the cap off the suppository and hands it to Bianca. It is a clear plastic bulb with a long tube, or spout, at one end. The girl takes it, looks at it with cool consideration, and points the tip toward her bottom.

It is here that Rachel begins to suspect that her daughter has been misled in some way. She recalls their brief conversation downstairs, examining it for errors or ambiguities. No, she thinks. I explained it properly. She knew what she was getting into.

“In the”—Rachel struggles for a moment. She does not want to use any terminology that might alarm the girl.

“Hole,” she says. It is the best that she can do, given her options.

“The one in your bottom.”

A nervous, imperious fury begins to take over Bianca’s features. She drops the suppository on the floor.

Rachel exhales. She has been poised, encouragingly, on her knees, but now she sinks down, resting her palms against the cold tile. It is not her own, biting, self-critical voice that she hears at first, but her mother’s, followed by her husband’s. How could you let her reach this age without knowing? This is basic anatomy. This is vital to a proper and healthy self-image. You have failed to prepare her, they say, although Rachel has only a feeble, closed-minded understanding of what this means. Prepare her. It means more than she wants it to. She is on the verge of something terrible, something unspeakable, when she laughs.

“Prepare Her” is excerpted from a story by Genevieve Plunkett in the latest issue of The Southern Review. 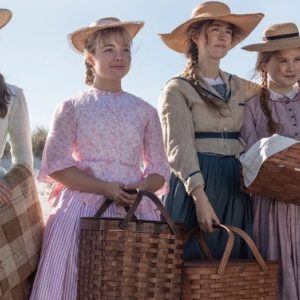 High School Crush: On Literary Longing and Misdirected Lust Forget that boy Laurie. The only thing I care about in the latest Little Women adaptation is who plays Friedrich Bhaer, Jo March’s...
© LitHub
Back to top