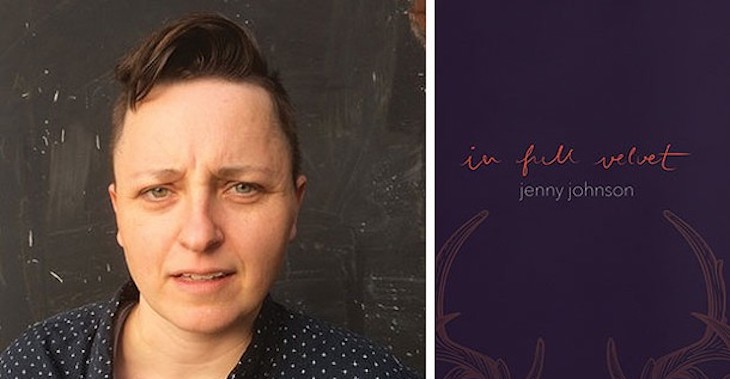 The Author of In Full Velvet Talks to Peter Mishler

For this next installment in a series of interviews with contemporary poets, Peter Mishler interviews Jenny Johnson. Jenny Johnson’s poems have appeared in The Best American Poetry 2012, New England Review, Troubling the Line: Trans & Genderqueer Poetics, and elsewhere. Her many honors include a 2015 Whiting Award and a 2016-17 Hodder Fellowship at Princeton University. Johnson earned an MFA in poetry from Warren Wilson College. She teaches at the University of Pittsburgh and at the Rainier Writing Workshop, Pacific Lutheran University’s low-residency MFA program.

Peter Mishler: To introduce you to Lit Hub readers, I was wondering if you could talk a little bit about your childhood and youth, especially in relation to when you began to develop a sensibility that you now see as integral to your life as a poet.

Jenny Johnson: I grew up in a small town in rural Virginia, where I was the confused closeted kid who was teased at sleepover parties for waking early to steal through pages of a novel. Eve Kosofsky Sedgwick describes reading literature as a survival skill for queer youth in Tendencies, because literature offered “sites where the meanings didn’t line up tidily with each other.” For me, writing, too, offered many liberating escape routes away from social spaces where ways of being and feeling in my body never felt quite “right.” I’ve heard a number of poets talk about how the poems we write are sometimes ahead of us. I think this sensation of ahead-of-ness through language was critical for me as a child and a teenager. Years before I found the words to say I was a queer person or that I had a girl crush, I had authored pages of poems that had already held and welcomed a mess of impassioned ambivalent feelings and, in that way, helped me to survive my environment.

PM: ​This gets me thinking about a poem in your collection in which you are looking back­­—”Late Bloom.” The teenage speaker lowers her vocal register and changes her name to “Tim, Charlie, Luke, Jason, every name but my own” to request a song for a girl crush. I wonder if you could articulate how an ahead-of-ness or unknowing as you write new poetry collides with a kind of hindsight, a certainty or clarity regarding the past?

JJ: I try to trust certain impulses in drafts. For example, the word “gall” was in every draft of “Late Bloom.” But I didn’t notice the word or really consider its meanings until a late revision. Gall, as in a noun for being bold. Gall, as in an outgrowth or shell. Have you seen them on the forest floor, those little green apples that fall off oak trees? Gall, as in a microhabitat where a single wasp larva hides out at the center until it grows into an adult who makes an exit through a tiny hole. I mention gall so briefly. But the gall that’s named early in this poem with all its layers of meaning is the same gall that leads the speaker to call the late night radio station and say I’m Tim, Charlie, Luke, or Jason. I didn’t see this at first. The poem’s figurative logic was working something out ahead of me. Assuming that my poems often know more than I do, I’ve found that the work for me is one of learning what to trust in an early draft; I try to listen to or follow the moments of strangest authority.

PM: To what degree does your dream life play a role in your writing? I’m thinking of course about the remarkable poem “In the Dream,” in which you and your friends have a kind of confrontation with a group of hostile, bigoted types.

JJ: The poem “In the Dream” is based on a vivid dream that I had, but it was harder to write for that reason. I don’t tend to find other people’s dreams interesting in and of themselves. It’s the telling that might make a dream fascinating. Which is to say, much revision was required to make my dream work as a poem. I needed the images to be atmospheric enough to capture a dive bar in outer space. Also, I wanted the poem’s details to feel simultaneously exact and slippery in quality, as they so often are in dreams.

PM: You live in Pittsburgh now—what do you like about living there?

JJ: I love the other artists I know here; I love the relationships we have built across disciplines. I am happy to know and share space in this city with socially engaged dancers, playwrights, theater artists, visual artists, arts administrators, and educators. Specifically, I have learned a great deal about creative risk taking from my friends and sometimes collaborators at Hatch Arts Collective—Paul Kruse, Adil Mansoor, and Nicole Shero.

PM: What poet or poetic lineage is the strongest presence in your work? What writers did you read that opened you up to certain ways of seeing or making that you think have become fully realized in your book?

JJ: I’ll name two, but many poets impacted the making of this book:

I started the sonnet sequence “Aria” after reading all of Love, Death, and the Changing of the Seasons by Marilyn Hacker in one sitting. Hacker’s book was vital for me because it offers not a mere glimpse, but a total immersion into a lesbian context, where a story of a yearlong relationship unfolds in verse. Also, she’s an admirable sonneteer with an enviable ear.

Whatever I know about syntactic leaping across time and space I learned from Larry Levis. One of the poems by him that I most closely studied while working on this book was “At the Grave of My Guardian Angel: St. Louis Cemetery, New Orleans.”

PM: I know you attended the Bread Loaf Writer’s Conference as a poetry fellow last month. What was the subject of the class you taught there?

JJ: I taught a class called “Exploring the Unsayable Through Sound,” where we looked at what Robert Pinsky calls a poem’s “audible web”—that invisible texture that hovers over poems that are especially sonically resonant. When this invisible web is in effect, when we hear it in a poem, I think we are sometimes willing to trust a meaning we haven’t quite apprehended, because of the behind-the-scenes work that sounds so often do. In this way sound can seem mysterious. So in the class, we considered how sound impacts meaning in two extraordinary poems (“Poem in which I Try to Express My Glee at the Music My Friend Has Given Me” by Ross Gay and  “Pastoral” by Jennifer Chang). Then, we did a writing exercise where everyone had a chance to experiment with sound, letting it be their guide as they explored a subject matter that they were struggling to tackle. I’ve found that writing poems that are sound-driven can be a way into writing about that which feels hard to say or express.

PM: When I first read your work, I wondered about your work’s relationship to Gerard Manley Hopkins, and both of your conceptions of what I would loosely term spirituality. I wondered if there was a kinship you found there, not theologically, perhaps, but something else?

JJ: I suppose I do believe in what Hopkins called “inscape,” the singular essence of things in the natural world that leaves a mark on our senses when we attend closely. In other words, I believe in the reciprocal powers of close looking. I am not sure if this is a spiritual belief exactly. I love this line from his journal from March 1871: “What you look hard at seems to look hard at you.” I also feel a kinship with Hopkins for his abiding faith in his own particular sense of rhythm. A rhythm, which, of course, he dubbed “sprung.” Did you know he scored the metrical stresses in his poems with blue chalk? It’s as if his poems were musical compositions that he feared no one else would be able to hear as he heard them without his markings.

PM: There are so many threads that are woven into In Full Velvet, I wonder what aspect (or lines or images?) of the book was the first point of entry into building the collection?

JJ: One of the older and wiser poems in my book is “Tail.” It’s a poem in which the speaker initially revels in the uses they might have for a tail, but then a leap is made to a childhood fantasy about having a differently gendered body and suddenly the poem isn’t funny anymore and the poem isn’t really about having a tail anymore either. This is one of those poems that was for the longest time ahead of me in its thinking. Ultimately, it’s about the phenomenological experience of feeling at odds with one’s material body, but feeling perfectly at home in a figurative one.

Meeting the Perfect Translator for My Book 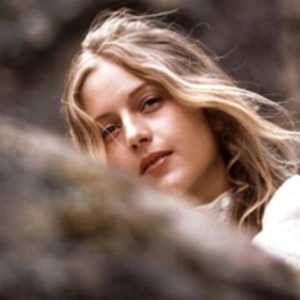 Natalie Dormer, best known as the young queen Margaery Tyrell on Game of Thrones, will star in an Australian six-part series...
© LitHub
Back to top