Meeting the Perfect Translator for My Book

Michael Frank Has Coffee with the Man "Living Inside" His Brain

“I know everything about you, Michael!”

The speaker was a tall man in his mid-fifties with an open, friendly face. Less shaking than pumping my hand, he said, “I’ve googled the street where you grew up and where your aunt and uncle lived. I have a good idea of how long it takes to walk there from your parents’ house. I know the shape of your driveway. I know what the Chinese elm you describe looks like. I know that your younger brother recently published a middle-grade novel. I know that your middle brother is a physician. I bet I could even guess what you like to eat for breakfast.”

All this came out in what seemed to be a single breath. If it hadn’t been for that congenial face, I might have thought: stalker. Actually, for a moment, stalker is precisely what I did think.

Then the fellow introduced himself as Karsten Nielsen, the Danish translator of my memoir, The Mighty Franks—and I understood. Well, I sort of understood.

I had come to Copenhagen to meet Marie Dissing Storm, the book’s editor at Lindhardt & Ringhof. Marie had asked Karsten to join us at her offices, so that he might interview me for a video she wanted to make to help present the book in Denmark, where it will be published next January as Den Fabelagtige Familien Frank. It was a lot to take in: the ebullient greeting, the stately 1930s building, the long hallways hung with photographs of Danish and other literary lights, the videographer and Marie’s other colleagues, the vast lunch buffet in the cafeteria. Yet as the morning unfolded, I found myself keeping particular track of Karsten, who gradually went from being my stalker to—well, to what? That was the question.

“You have to realize,” Karsten said at one point, “I’ve been living inside your brain—the product of your brain—for three months now. There are so many questions I’d love to ask.”

I had a number of my own.

Two days later, Karsten and I met in a restaurant near where I was staying in Vesterbro. He arrived by bicycle (of course: it was Copenhagen), and we sat outside on a cool but bright Friday morning.

I decided to dive right in and tell Karsten about that stalker take of mine. He laughed and said, “That probably shouldn’t have been the first thing I said to you. But there’s a practical explanation. I need to visualize the setting of the book, so I google all of the streets, always.”

“Did I do such a poor job of depicting the lay of the land?”

“Not at all,” Karsten said. Then he went on to explain that there are instances in English where I didn’t have to be precise about certain details, but in Danish he did. “If you say, ‘In order to go to the apartment, we drove down Hollywood to Ogden,’ it’s important for me to know if you turned right or left. I need to know where the narrator is sitting; otherwise some things will be unintelligible. The chapter you call ‘Off the Hill’? I had to be far into it until I knew what that meant, did it mean only down or away or both? In Danish would be more away. And of course at the same time it’s figurative. So many options.”

If I were that specific, I said, I would feel like I were writing a guidebook.

“Not in Danish you wouldn’t,” Karsten said. “I’ll give you a different example. When you describe your aunt’s house, La Maison, you say that you go ahead into the living room, left into the kitchen. It took me a while to picture that—I’m still not sure I have it correct. And for me as a translator, picturing is key.”

Being a fairly visually oriented person myself, this was something I could understand. I offered to draw Karsten a floorplan of the house, and he nodded eagerly. I turned to a clean page in my notebook, made a few marks, and immediately began to struggle to get the rooms to line up—which was curious, given that I knew the house as intimately as I knew the people who lived in it.

In The Mighty Franks I tell the story of my unusually intertwined family, where my father’s sister was married to my mother’s brother. The older couple, my aunt and uncle, were accomplished screenwriters who had no children of their own and “borrowed” me, teaching me about art, literature, movies… and life. Eventually my aunt’s personality turned unstable and came to dominate—and irreparably damage—our family, but that is not where the book begins. It begins with a little boy falling under the spell of a magical gifted woman. The challenge of keeping her magic and her destructiveness in balance came back to me as I tried to draw the enchanted spaces in which she and my uncle had lived. Getting the proportions right, in all senses, was, it seemed, as difficult as ever.

Proportion was something that Karsten appeared to understand. As I kept drawing and crossing out and starting over again, he told me that he was reminded of his own back-and-forth with my aunt’s many adages, which are a running motif in the book. One in particular mystified him: her beloved “more is more,” which she invoked when speaking about everything from furniture to money to the amount of butter she used in her brownies.

“Is it because her love of all things excessive and lavish is too extreme to be understandable?” I wondered.

“I think it may be because in this country we value the opposite. The related idiom we have is ‘know the art of limiting yourself’—which is a long way from ‘more is more,’ closer to its opposite in fact. So I’m probably going to play with that and end up with a kind of hybrid like ‘To limit yourself is not an art—the more the better!’—‘Begrænsningens kunst er ingen kunst—jo mere, jo bedre!’ Denmark, you see, is a small nation, and we don’t like to stand out. We keep track of each other.”

“Whereas America,” I said, “is all about standing out.”

Not only hers, I thought as I handed him my highly imperfect drawing of the floorplan.

“I’ll add it to my collection of visuals,” Karsten said. “For most books I translate, I create my own mini-version of a mood board—the way a designer does.”

Intrigued—how not?—I asked Karsten to tell me what was on his for the Den Fabelagtige Familien Frank. He named an image of a letter from Napoleon to Josephine (my aunt adored Napoleon, but characteristically overlooked the fact that he was a dictator, praising him instead for his love letters to Josephine and the fact that he liberated the Jews from the ghettos of Europe). Another was the marquee of the old (alas now defunct) Vagabond theater on Wilshire Boulevard, where my aunt and uncle introduced me to the classic movies of the 1930s and 40s. A third was the book jacket of a history of the music scene in Laurel Canyon, where my memoir is largely set.

Karsten’s googling made more sense now, but I told him I was still a little mystified by why he wanted to know about my brothers.

“I think it comes from being immersed in your interactions with your brothers when you were younger,” he said. “Your very different psyches and characters and your different roles in the family made me wonder how they developed, what they did with their lives, after being so much type-casted by your aunt and uncle.”

This resonated with me, since one of my own perpetually unslaked interests concerns what happens after the end of biographies and memoirs, when I find myself curious to know what came of the wife (or husband), the daughter (or son), the partners, the collaborators, the disciples, the heirs—how their lives were marked, how they made peace (or not) with their experience of the central figure around whom the drama is built.

Yet the happily (or unhappily)-ever-after part was just one aspect of his curiosity, Karsten went on to add. Sometimes, he said, he believed that translators and books come together with a kind of synergy. “To be truthful, the whole staging of your family drama had a resonance in me personally, because you and I, we have certain parallels,” he explained. “Like you, I am the eldest of three sons, and we grew up at about the same time. No matter that it was on opposite sides of the globe, there are mutual experiences—the moon landing, the music, this feeling in the air which is so hard to grasp but is there anyway, the smells, how your parents reacted. They are very powerful for me. Also, while your experience as a sensitive child is very specific, at the same time it has a universal quality. What happened could have happened anywhere, in a suburb to Copenhagen, for instance.”

“Do you need to feel this kind of connection,” I asked him, “in order to produce a successful translation?”

“No. Do I welcome it? Of course. But translation is after all a craft, a skill you have to be able to practice widely. Nevertheless when there is a strong connection, I think that comes through.” He paused before adding, “While I was working on the book, I kept having this feeling: your aunt and uncle should have made space for this little guy… then this bigger guy. Space for him to speak, and to be heard. It was such a narrative power play from their side. I think there’s something universal in this too, even if we don’t all have professional dramatists in our families. It’s an unconscionable thing to do with a child, to deny his voice, and yet you manage to write about them with compassion and understanding, not anger or vengefulness, which seem like the more primal responses.”

“Primal in life maybe for a time,” I said, “but in writing they can be—”

He had finished my sentence with the exact word I had in mind. And in that moment I felt embarrassed by my first impression of Karsten. I understood now that he was the furthest thing possible from a stalker. He came as close as I could imagine to being that perfectly attuned reader that every writer longs for, the ideal (idealized?) listener who pays attention to your every word and nuance and understands your book as well as you do—maybe even better.

Michael Frank is the author of What Is Missing, a novel, and The Mighty Franks, a memoir, which was awarded the 2018 JQ Wingate Prize and was named one of the best books of the year by The Telegraph and The New Statesman. His latest book is One Hundred Saturdays. His essays, articles, and short stories have appeared in The New York Times, Los Angeles Times, The Atlantic, Slate, The Yale Review, Salmagundi, The TLS, Tablet, and other publications. The recipient of a 2020 Guggenheim Fellowship, he lives with his family in New York City and Camogli, Italy. 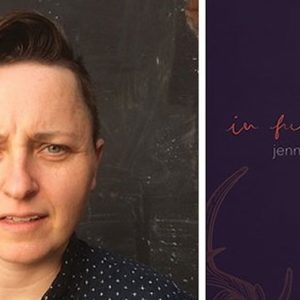 For this next installment in a series of interviews with contemporary poets, Peter Mishler interviews Jenny Johnson. Jenny...
© LitHub
Back to top