I’ll never forget reading Beloved for the first time. I was in high school. I was already a reader; I had grown up in a house full of books, was devoted to Sylvia Plath and Robert Heinlein. But still I was surprised when I began to read. This novel was a new kind of literature, something I had never seen before: so raw and lyrical, so brutal and so beautiful, a harrowing ghost story over-packed with the most gruesome reality. I read it twice in a row, but once I got to class, found I could say nothing; I was too held in awe.

Toni Morrison’s Pulitzer Prize-winning novel centers on a freed slave, Sethe, whose home is haunted by the ghost of the baby daughter she murdered to keep her from having to return to slavery—a ghost that soon comes to the door in the form of a beautiful young woman. Like any good ghost story, much of this novel is about memory—what we force ourselves to forget, and what we cannot forget—and the extreme, excruciating effects of slavery, even for those who have nominally escaped its clutches. It is a book full of pain, trauma, and also unbridled love—the love of a mother who will do anything, even the most horrifying thing, to keep her children from suffering. As part of our ongoing series, a selection of songs that reflect some aspect of the novel are below.

Beloved is dedicated to “Sixty Million and More”—that is, to the millions of people who died in and as a result of American slavery. This harrowing song was originally written by Abel Meeropol as a poem to protest lynchings in Jim Crow America, after seeing the truly terrifying photograph of Thomas Shipp and Abram Smith hanging from a tree. Famously, Holiday would only sing this song as the last number in her set—no encore—with the room dark except for her illuminated face, and no one, not even waiters, could move while she sang. I can’t help but think of Sethe, thinking of Sweet Home, the plantation to which she was once confined:

. . . although there was not a leaf on that farm that did not want to make her scream, it rolled itself out before her in shameless beauty. It never looked as terrible as it was and it made her wonder if hell was a pretty place too. Fire and brimstone all right, but hidden in lacy groves. Boys hanging from the most beautiful sycamores in the world. It shamed her—remembering the wonderful soughing trees rather than the boys. Try as she might to make it otherwise, the sycamores beat out the children every time and she could not forgive her memory for that.

As others have said, Sethe is “that most feared and despised figure in Western Civilization, the murdering mother”—but one who murdered for good reason. “I’ll explain to her,” Sethe thinks, “even though I don’t have to. Why I did it. How if I hadn’t killed her she would have died and that is something I could not bear to happen to her. When I explain it she’ll understand, because she understands everything already.”

Carter is one of the best contemporary jazz violinists (The New York Times called her “the finest jazz violinist of her generation, a hard-charging soloist whose precisely focused tone and graceful way with a ballad hint at her long years of classical training”), and this track is an addictive, appealing thing, a peeled, strange version of Kenyan singer Ayub Ogada’s original song, whose title translates to “rain is coming.” More to the point, it’s something of a haunting.

I can’t stop listening to this song—it’s a little too upbeat for Sethe, admittedly, but perhaps it can tinge the story with some kind of hope. And after all, it’s a story about lingering ghosts:

Welcome to my earth
It’s a crying shame
We have built a foolish world
Busy fighting, cruelly lying and denying

My ghosts are not gone
They dance in the shade
And kiss the black core of my heart
Making words, making sounds, making songs

Alicia Keys, “Queen of the Field“

In a way, this one’s too easy—a song about an enslaved girl (Just a little girl / A little girl forgotten / Born to cry / Born to die / Born to nothing) that Keys wrote for the 12 Years a Slave soundtrack—but it’s also so good. And this is a novel that addresses slavery head-on, eyes-open, so I think its playlist should too.

Solange, “Cranes in the Sky“

On the theme of forgetting—or not forgetting—is Solange’s Grammy-winning number about trying to dissolve negative emotions that refuse to be dissolved. “I was working through a lot of challenges at every angle of my life, and a lot of self-doubt, a lot of pity-partying,” she told Beyoncé in Interview. “And I think every woman in her twenties has been there—where it feels like no matter what you are doing to fight through the thing that is holding you back, nothing can fill that void.”

Tonally, this song reflects the feeling of loss and sorrow in Beloved, but I’ve really included it for all of those incantatory “I know”s, which parallel Morrison’s anaphora and rhythmic storytelling, the sense that in each paragraph, and certainly over the course of the novel, she’s working a spell. Plus, a reminder of the power of language to create something that was, just a moment ago, not there at all. 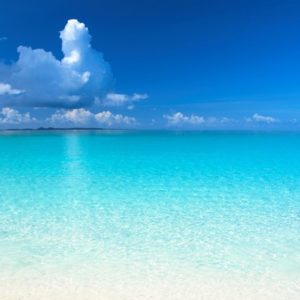 It was a dark and stormy night. No, really—I was drinking dark-and-stormies, those delicious Caribbean concoctions of rum and ginger...
© LitHub
Back to top