At the Sixth-Annual Anguilla Literary Festival

It was a dark and stormy night.

No, really—I was drinking dark-and-stormies, those delicious Caribbean concoctions of rum and ginger beer. So that chestnut of a lede is apt. From May 18 to 22 I was visiting Anguilla, covering the sixth-annual Anguilla Literary Festival.

In case you’re a little rusty on your geography, Anguilla is a small island in the Caribbean, about 35 square miles (the size of Manhattan), and it’s been host to one of the bookish world’s most under-the-radar events for the last six years. Part of the “Leeward Islands,” which include St. Kitts and Nevis, Anguilla is a British protectorate. The 50th anniversary of its 1967 revolution was on May 29, and the Literary Festival honored it with a panel on “Revolution and Enlightenment” featuring Professor Don Walicek, Lennox Vanterpool, Anguillian Attorney General John D. McKendrick, Orelia Kelly, The Reverend Doctor Wycherley Gumbs, and Timothy Hodge.

While McKendrick and Walicek had interesting things to share (McKendricks’s less so, perhaps, since his recent book has to do with recovering remains of a Scottish wreck off the coast of Panama), it was unfortunate that two non-Caribbean white men took up the bulk of the panel’s allotted hour. Unfortunate, but not surprising for the native Caribbeans at the Festival who have suffered under generations of colonial interference in their countries.

Take, for example, the young women who won the Malliouhana Poetry Competition, a contest named after Anguilla’s ancestral spirit. Savannah Croft, Rhonica Connor, and Lesley Fleming gave passionate spoken-word performances that included lines about freedom, but delivered them at Government House, the center of Anguillian British political administration, headed by current Governor Christina Scott. While younger Anguillians clearly cherish independence, it isn’t entirely clear when they will achieve it in full.

Anguilla’s greatest asset is its coastline, with 33 pristine beaches technically open to all. However, the number of private resorts and villas crowding that coastline mean that if you’re not in residence at one of these pricey places, you’re not likely to enjoy the beach in the same way tourists can—you can visit them, but you won’t be receiving drink service or lying on chaises longues. Anguillians and their tourism industry depend on these luxurious hotels and rentals, but the proprietors don’t necessarily depend on, or care about, the Anguillians.

Another islander at the festival, novelist Nicole Dennis-Benn, asked of her native Jamaica: “Who owns these beaches?” Dennis-Benn noted that she and her fellow Caribbean writers are trying to “show another side of these islands that are so often seen as places of pure pleasure.” That other side of Anguilla may not be readily visible from a resort like the one we press and some of the panelists stayed at, a brand-new five-star-worthy destination that would be perfect for a wedding or family vacation, with an open-air lobby that takes advantage of tropical breezes, a heated infinity pool, and a secluded beach on Merrywing Bay.

No wonder it’s this resort’s Yacht Club restaurant to which the Honourable (sic; remember, it’s a British protectorate) Cardigan Connor, Parliamentary Minister for Tourism, Youth and Culture, and Sports, takes the press detail (all two of us) to dinner. He spoke about the challenges his country faces in raising its profile. Connor, born on Anguilla, moved to England in the mid-1970s and spent over 20 years there as a professional cricket player for Hampshire, then another decade or so coaching cricket between Australia and Anguilla before returning permanently to the latter. He understands different global economies, heading to a conference of peers in Manhattan the week after we meet, and he’s determined to bring some of the bright lights he saw in other big cities back home. “What should we do to help the rest of the world understand what Anguilla has to offer?” he asked, genuinely looking for input from people who had never visited the island before.

The Anguilla Literary Festival came into being when two Americans who retired to the island thought about starting a retreat for writers. Reginald Oliver and his wife Stephanie Stokes Oliver had lived in New York City for decades, where he worked for Dunn & Bradstreet and she was Editor in Chief for Essence.com (among other publications). When the Olivers discussed their plans with friends and colleagues, a full-blown literary festival took shape. “Literacy has always been of paramount importance to our country,” said Sherille Hughes, owner of the Paradise Cove Resort and a founding member of the Festival. “A book is the most important tool you can have.”

Of course, no event gets off the ground without funding, and while the Anguilla Tourist Board underwrites accommodation and travel for festival panelists and press [disclosure: including me], many other expenses are involved, and this is where Dan Brown enters the picture. The author of The Da Vinci Code owns a villa on the island and believes in giving back to Anguilla so much that he not only helps fund the festival, but will headline it in 2018. An important part of the Anguilla Literary Festival is its “Champions’ Pursuit of Literacy outreach, that is funded by sponsors, donations and ticket sales. The Pursuit allows selected students from all of Anguilla’s Primary Schools to interact with the visiting authors, and for students from the Secondary School, WISE and The Dove Centre to attend sessions at the Lit Fest. All Lit Fest participants are offered the opportunity to be part of this initiative, and for many of them the chance to “give back” to the local community is one of the most rewarding aspects of the festival.

Despite Brown’s ties to publishing around the world, he exercises no control over the Festival’s programming, which is run by a committee including both Olivers, Hughes, and at least two librarians. What makes the Anguilla Literary Festival different from all others I’ve attended is twofold. First, along with the customary readings, panels, and keynotes, there are a number of writer-centric happenings, like a poetry master class given by Tiphanie Yanique, and an intensive writing for youth seminar run by novelist and Brown University professor Colin Channer, who helped establish and once ran his native Jamaica’s Calabash Literary Festival. Local writers, aspiring writers, students, and interested citizens filled the chairs, showing how much thirst there is for literature and culture on Anguilla. Keynote sessions featured Ilyasah Shabazz interviewed by the Honourable Palmavon (Pam) Webster for “A Birthday Tribute to Malcolm X,” Shabazz’s father, and novelist Thomas Mullen (Darktown) interviewed by media entrepreneur Peter Bailey.

Second, all participants were welcomed each morning at the Paradise Cove Resort for a hearty breakfast (including Caribbean specialties like saltfish and johnnycakes) coinciding with each day’s “Rise and Shine Session,” which were looser than scheduled panels and focused on integrating different forms of literature with Caribbean culture. I’ve never seen a literary festival with such focus on place and politics. One standout performance was Trinidadian Llewelyn MacIntosh, aka “Short Pants,” speaking his “talkalypso” poems, which included a funny riff on global surnames and soccer called “Paris in ‘98” and an even funnier piece called “The Finger” about male genital cancer prevention. Adrian Green’s verse was sung, with one line—“This is for the ancestors”—sending spiritual chills up audience spines.

While each day at the Festival involved literature, each evening involved local food, drink, and music. MacIntosh hosted a “Calypso Explosion” that showcased musicians of many ages. And on the Sunday after that concert, festival participants were invited to a beach party held at the Frangipani Resort’s Straw Hat restaurant, complete with DJ, rum punch, and delicious food, all available within steps of the stunning Mead’s Bay beach. The Anguilla Literary Festival has its fun parts down cold.

That gives me hope the Festival will also be able to get its more serious parts down cold, too. At the moment, too many panels seem to be thrown together rather than planned carefully; consider the “Revolution and Resistance” one I mentioned earlier, or the one on self-publishing including an Anguillian resident who happens to be a white American woman. Unfortunately, the same woman chose to read an excerpt from her book that was not set in Anguilla and that seemed in particular to emphasize her privilege. Perhaps it didn’t jar everyone, but it did me and others to whom I spoke about it.

What also jarred me, unfortunately, was the contrast between coastal Anguilla—luxurious, spotless, perfection—and inland Anguilla, with its poverty, sparse infrastructure, and weather-ravaged architecture (although Anguilla isn’t often hit by hurricanes, when it is hit, the results are devastating, as they were in the last big one of 1995). After the festival-proper ended, its PR lead Trudy Nixon, who moved to the island 15 years ago from her native England, took our little press corps of two on a car ride up and down Anguilla’s 13 miles.

She stopped to show us The Valley, which functions as a sort of main town, some quietly lovely churches, several beaches, and Island Harbor, the northeastern tip of Anguilla where many families claim heritage from a ship of Irish soldiers wrecked there two centuries ago. She paused to reflect and said “Island Harbor is my favorite place in the whole world,” looking down on its quiet waters and less-flashy bayside hotels. Of course, writing about those places doesn’t pay the bills, so Nixon publishes a gorgeous small magazine called True Anguilla that features lots of articles and ads with the posh tourist spots.

It seems there is no way for Anguillians to disconnect their economy from the luxury travel that supports it (Nixon points out that in December and January, the private-jet hangar looks like a parking garage at full capacity), and many of them wouldn’t want to even if they could. But the great thing about the Anguilla Literary Festival is that it offers a cultural opportunity to explore the ever-present tension between islanders and others. As Walicek stood and spoke during the “Revolution and Enlightenment” panel, he reached a line from his paper about islanders “hearing the tak-tak-tak of arriving British helicopters.” At that same moment, above, we could all hear the incoming whir of a tourist helicopter, perhaps full of people flying over from St. Maarten for lunch at the Straw Hat or Blanchard’s. Anguilla exists as an ancient place filled with modern people whose needs may be changing—but whose spirit is indomitable. 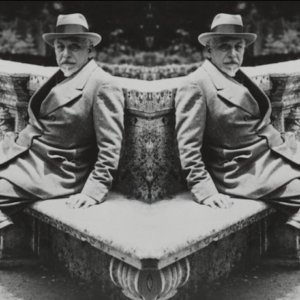 Don Winslow talks crooked NYC cops and whether or not we should legalize heroin. | Literary Hub Victoria Redel...
© LitHub
Back to top