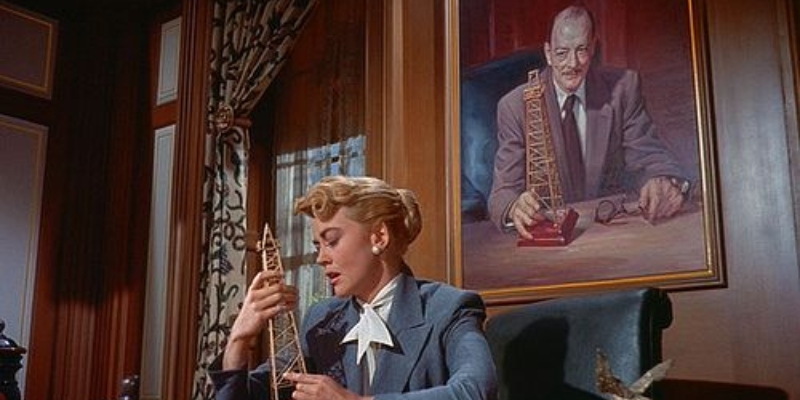 Laura Valenza on the Subversive Power of (Over-the-Top) Artwork

The year 1956 saw the film releases of Written on the Wind and Giant, both about Texas, both about oil, and both starring Rock Hudson. The films have other striking similarities, too: intergenerational family mansions and the use of art to comment on wealth and power. While Giant is as stately, measured, and composed as its wealthy Benedict family tries to be, Written on the Wind is as wild a joy ride as the gaudy red and yellow Hadley cars whipping through its scenes.

Based on Robert Wilder’s 1946 novel, Written on the Wind was re-released by the Criterion Collection last month. In the Criterion’s supplemental materials, film scholar Patricia White poses an insightful analysis of how director Douglas Sirk uses melodrama to craft a social criticism of wealth and excess. White identifies a signature move of the genre: “Melodrama doesn’t say something once; it says it, you know, five different ways.” In this case, one of those ways is through the intentional use of excessive art, which is as important as the often ironic use of the overacting, the intense score, and the Technicolor hues.

Written on the Wind opens with Kyle Hadley (Robert Stack), heir to his father’s oil empire, stumbling out of the family mansion and collapsing, dead. Calendar pages flip in the wind, and we jump back in time, where the story really begins: when career woman Lucy Moore (Lauren Bacall) seems to forget her ambitions and marries the wealthy and tormented Kyle. At the Hadley estate in Texas, Kyle returns to drinking after discovering he may not be able to father children.

Meanwhile, Kyle’s sister, Marylee (Dorothy Malone), attempts to woo his best friend, Mitch (Rock Hudson), while publicly pursuing other sexual desires despite (or to intentionally provoke) her family’s shame. Jealous of the burgeoning connection she sees between Mitch and Lucy, she convinces Kyle that the two must be having an affair—which is ultimately true, though it doesn’t get much further than meaningful glances and one passionate kiss before Lucy finds out that she’s pregnant with Kyle’s baby. The tragic Kyle refuses to believe the child is his, and from there the film unravels in a twisted whirlwind.

Despite this bursting-at-the-seams plot, the subtle and sinister use of art in Written on the Wind says so much more than the main action. Take, for example, a line of easels in the ad agency that displays mockups for the Hadley Oil Company in vibrant reds, oranges, and blues, emblazoned with the word “Power.” Behind the line of easels, a painting hangs on the wall, linking the film’s excess of both emotion and consumerism by paralleling art and ad design. The painting depicts another painting; space warps in a mise-en-abyme effect.

Each painting in the film suggests other worlds, showing us the story isn’t confined by the borders we see. On their wedding night, Lucy discovers that Kyle sleeps with a gun beneath his pillow, and in a painting above the bed, a lighthouse teeters on rocky bluffs as white-capped waves pound the rocky shore. And as Kyle confronts his impotence, a heavy-framed painting of a dreary house on a country road angles over him and casts a deep shadow on the wall, forming a precarious aura around his head.

When Lucy tries to get Kyle to open up to her, he describes how he feels as if he’s in a snowy pass where one noise will make the snow crash on him. Shortly after, an inky winter landscape hangs in the background while Marylee convinces Kyle that his wife is having an affair with his best friend. Later, an intoxicated Kyle sits beneath a painting in which heavy, dark clouds blend into a snowy hill. Shadowy trees loom, and a black fence hems in a lone shadowy figure.

It’s an overwhelming piece of art, the frame alone as thick as Rock Hudson’s head.

Other ads infiltrate the art, too: When the doctor and Kyle meet in a shop to discuss his “weakness,” as the doctor calls it, the ceiling disappears in a flurry of banners proclaiming “Drugs” and “Tag Sales,” emphasizing the relationship between patriarchy, consumerism, and addictive behavior. When Mitch confesses his love for Lucy and she announces her pregnancy, a foreboding ad for guns hovers on the brick wall behind them.

Later, the climactic scene in which Marylee and Mitch try to get a gun away from Kyle takes place beneath the portrait of the family patriarch with his phallic oil derrick, corporate portraiture like an ad for wealth and power, amusing in its lack of subtlety. As with much of the film’s over-the-top art, that humor becomes sinister to the status quo by undermining the surface-level story.

Based on Edna Ferber’s 1952 novel and released just a month before Written on the Wind, George Stevens’s Giant also confronts capitalism and patriarchy, and relies on art to forefront the most important and subversive layers of social critique. A quiet, unusual film, it’s as slow and expansive as the title suggests, concentrated in domesticity and lingering on shots of the Texan landscape. Giant portrays a quarter century of a powerful white ranching family led by patriarch Bick Benedict (Rock Hudson) and his wife, Leslie (Elizabeth Taylor), as they watch ranching give way to oil and tepidly confront racism toward Mexican Americans.

Giant’s most significant artwork functions similarly to the patriarchal portrait in Written on the Wind: a massive landscape of cowboys on the range leans treacherously over many key scenes. It’s an overwhelming piece of art, the frame alone as thick as Rock Hudson’s head. The landscape suggests as much or more power than a portrait, emphasizing the notion of the Benedict family as natural inheritors of the land.

Art confuses boundaries and melts the walls of these mansions. Interior and exterior blend. The Benedicts are the open range. But that’s a one-for-one exchange, not the worlds-within-worlds of Written on the Wind. The melodrama of the latter links art to emotion and personal truth, which allows the film, even 60 years later, to be reinterpreted in productive ways, especially in terms of gender and sexuality in a patriarchal and capitalist society. Giant is less malleable: it contains scenes and lines that are surprisingly forward-thinking, but even while it makes grand statements about race, class, and gender injustices, it keeps wealthy, white men at the center.

Artists have long used coded symbolism to convey radical ideas beneath conservative surfaces. The use of art in Giant becomes particularly subtle and sinister: the painting may be heavy with the weight the Benedict family carries in Texas, or it could be heavy with the burden of patriarchy, the Republican Ideal, impossible American Dreams, and capitalist gluttony. While whiteness remains at the film’s center, it’s overshadowed by duplicitous art. Indeed, when the novel mentions landscape paintings, Leslie clearly sees them as negative symbols of excess.

In some ways, Giant seems to make even bolder statements on race than the novel, but the final scene, which takes place under the weight of the ranch landscape, makes a notable shift. In the text, Leslie announces that every generation of Benedicts, including her and her husband, have been failures, and that their children, who defy race, class, and gender barriers, are the first family successes.

But in the film, rather than telling her husband he’s a failure, Leslie tells Bick that by standing against racism (reluctantly, once), he is finally great. Giant’s cinematic ending—Leslie and Bick gazing upon their white and interracial grandchildren—wants us to feel uplifted, as if racism is easily solved with sentimentality. The heavy painting, as a symbol of whiteness and oppression, threatens to crash down on the Benedicts, but is ultimately reinforced by Leslie’s assurance of Bick’s greatness. Then again, like the Hadley portrait, the landscape’s absurd size casts absurdity over the entire scene, making it difficult not to mock the Benedicts as they pat themselves on the back.

At the end of Written on the Wind, Marylee weeps beneath the patriarch’s portrait as she takes up the phallic model of the derrick, and with it the throne of Hadley Oil. Mitch revolts against the oil empire and takes a job with another, career girl Lucy accepts the role of passive wife (again), and liberated Marylee assumes her father’s complicit place at the head of the table. In both films, no one—not even the viewer or the source material—can escape the powers of petroleum and patriarchy. (Interestingly, Wilder’s novel wasn’t even about Texas oil, though North Carolina tobacco fits similar themes.)

As film scholar Patricia White points out, while the conservative film industry could censor movies, it couldn’t really censor art (note the nude or nearly nude sculptures in Written on the Wind). Regardless of how the art is interpreted in both films, what’s important is that it is up to interpretation. It complicates, creates tension, and even evokes laughter in what seems like the wrong moments. Its uncensored narrative layer creates a sense that these films—sometimes literally—aren’t letting us see the full picture. 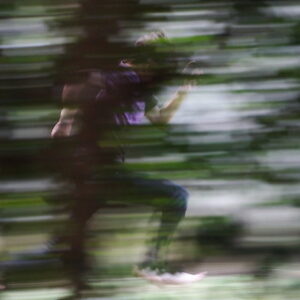 People say runners must be running away from something. Death or a bad diet are the most common suggestions, and while there...
© LitHub
Back to top