Peter Stenson is the guest on this week’s Otherppl. His new novel Thirty Seven is available from Dzanc Books. It is the official February pick of The Nervous Breakdown Book Club.

Stenson received his MFA from Colorado State University in 2012. His first novel, Fiend, was an Amazon Best Book of the Month for July 2013. His stories and essays have been published in The Bellevue Literary Review, The Greensboro Review, Confrontation, Blue Mesa Review, and elsewhere. He lives with his wife and family in Denver, Colorado.

“The closest cult-like experience that I’ve had are my issues with addiction and alcoholism and stuff like that.”

Peter Stenson: Something has always drawn me to the concept of abandoning yourself to something larger than yourself. It’s like being taken care of and believing in something. In a lot of ways, it’s what my parents found in organized religion.

PS: Yeah, no speaking in tongues and it’s all pretty domesticated and barbless. There was always that draw ever since I was little to a group of people you dedicate your life to.

BL: You couldn’t find that in Presbyterianism?

PS: No, it was not my jam so much. We would always get picked up from school, and mom would need to go to the church and work and stuff. We would just roam around the church and in the bomb shelters from World War II or whenever it was. There was a pool table, and we would play pool and other weird things.

PS: Yes, exactly. And we started smoking cigarettes and would do it down there. It was strange but it didn’t scratch the same itch as my fascination with cults.

BL: And that fascination with cults was all the way back to childhood?

PS: I think so. Not as strong as my wife’s, who read Helter Skelter like 10 times, but the draw was definitely there. The closest cult-like experience that I’ve had are my issues with addiction and alcoholism and stuff like that, being plucked from one situation and being put into treatment facilities or rehab or retreat or something like that and being forced to accept, these are your people for the next 30 to 90 days or however long it is.

You got to figure out how to get by with them and develop close bonds. It happens in a really short amount of time in my experience. As far as personal things I was drawing from, it was definitely that, out of that experience going to some place completely broken and finding a family of your own choosing. Those people in there, you get closer to them and share more things with them in a week than people you know your entire life that don’t know certain things about you.

BL: Isn’t it interesting how it’s sometimes easier to be intimate with people you barely know than to do it with people who are in your family?

PS: I know, it’s so bizarre, but so true. I would open up with strangers as long as they were dealing with the same affliction, with complete strangers in two minutes. However, with my parents, I would never venture with half the stuff.

“There are certain obsessions that I’m trying to work out.”

BL: I can’t imagine when you were in the depths of your struggles, you were doing too much reading, but maybe I’m wrong.

PS: You’re definitely not wrong. I wasn’t a huge reader growing up. I liked to write a fair amount. I would always have these grand ideas for novels, get ten pages in and, you know, not touch it again. All the addiction stuff happened in a pretty condensed period of time, from fifteen and sixteen to eighteen. It was Fast and Furious: Tokyo Drift.

BL: One of the most harrowing addiction movies of all time.

PS: Once I started getting sober, it was back on. I would read a lot and write a lot. If I relapsed, I would stop, that process. I once wrote a novel on a laptop that I ended up pawning for ten bucks, which is a bummer. I mean, the novel was horrible. It was my first one. I was like seventeen, but I’d be curious to see it.

BL: What was it about?

PS: Me. At points I would accidentally make the narrator’s name Peter. It was awful, but it got weird too. I had just seen Kill Bill, so the last third there was all of a sudden these ninjas and stuff like that. It doesn’t really make sense.

BL: Like thousands of crows. I feel like you have a particular gift for taking the stuff of your life and the stuff of real life and synthesizing it into these horror fictions. I’ll give you an example. There is this kind of genius to the idea of writing in your first book Fiend, it’s like a zombie story but it’s tied to methamphetamine use. When somebody says that, it’s like that’s genius because there is some zombie quality to people who are cracked out on meth. How did that come to be?

And cults and addiction and religion, you’re synthesizing all this stuff—is there a through line from book to book in terms of how you might have thematic territory that you’re interested in covering but you’re unsure of what the way in is? Like, you said, your wife says to write about cults, and you think about meth and watch The Walking Dead. Can you talk a little bit about the creative genesis?

PS: I think there is a through line with both of my books. I remember in grad school my adviser Stephen Schwartz–

BL: Where did you go to school?

PS: Colorado State University. I had moved out from Minnesota to Fort Collins and went to school there. I had a pretty darn good experience there for the most part. My first workshop my story was really bad and everyone was so mean, and I just cried for days. Stephen, who was my adviser and was in that class, would later tell me that was the worst story I ever had submitted for any workshop. He said that when introducing me for a reading.

But anyway, he would always say to give in an hour, you’ll write your way into your obsessions. I found that to be true with really everything I’ve written, whether it’s short stories or essay or novels, both the published ones and the ones that are sitting on my hard drive. There are certain questions or themes or experiences that I’ve had and I’m trying to figure out. Sometimes that works well with the story, and sometimes it doesn’t. There are certain obsessions that I’m trying to work out.

BL: What are those? Can you name them?

PS: I think one—and it’s going to sound stupid and cliché—but I’m trying to figure out if there is a god or what it means to believe and what it means to put your faith in something. And then stemming from that is why any of this matter. It sounds so freshmen Philosophy 101, and it kind of is, but it’s what I think about all the time.

My natural defense mechanism when I’m being awkward and waiting to pick up my daughter and talking to the other parents, and they’re talking about Lululemon and school choices and teachers, and I’m just thinking about cutting my thighs and if there is a reason we’re alive. That’s kind of what I gravitate towards, some weird variation of that I find in most of my work. The search for love, and the search for acceptance would be in there too, and I think a lot of my characters are dealing with that and searching for that, and finding different means that supposedly fills that hole for a little bit, whether it’s substances or a cult or a belief or a love, and it inevitably comes up short every time. 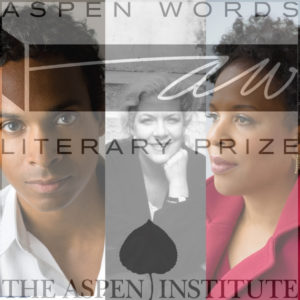 Aspen Words, a program of the Aspen Institute, today announced the shortlist for the Aspen Words Literary Prize (AWLP), a $35,000...
© LitHub
Back to top