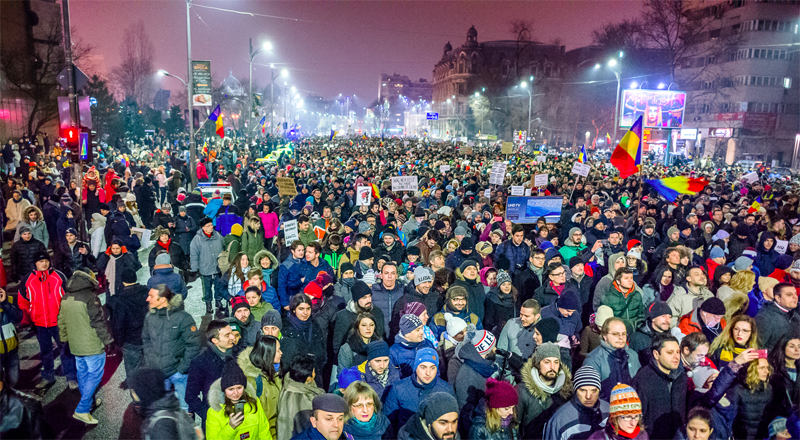 I need to say it. I write an incredibly long and incoherent email to a friend about the Romanian parliamentary elections. Only 38.9 percent of voters showed up for the vote. The map of the country turned red on all official news websites. Again. The PSD (Social Democratic Party) is the triumphant winner. Again. A coalition will form. Again. Parliamentary majority. Again.

I am beyond frustration, beyond anger. I type, and I smoke. I curse a lot: in writing, in my head, in the back of my throat. Indifference infuriates me. Incompetence scares me shitless. Corruption sparks nauseating narratives in my brain.

People voting against my beliefs is not what infuriates me. What infuriates me is that great 61.1 percent of voters who stayed at home—comfortably sunk in their sofas, cuddling with the remote, enjoying just another casual Sunday, generously handing over the possibility to set a parliamentary majority decided by less than 20 percent of the adult population. What infuriates me are all the people like myself who go about their own business and engage in the activist routine only once every four years, trying to convince their acquaintances to exercise their democratic right. What infuriates me is that friends of mine traveled 500 km by train to vote, friends of mine were immobilized in hospitals and asked for mobile ballot boxes, friends of mine did not sleep for 50 hours to supervise the process . . . and yet so many of my generation refused to participate. What infuriates me is that nothing is significant enough for these absentees: not infrastructure, nor education; not economy, nor health care; not justice, nor civic life. Just the speed of the internet. Well then, mission accomplished: our country has the second fastest average connection speed in the world. I am enraged. But I am still hopeful. I want to believe in the new government. I want to believe that the biggest party in the country may still have some good people ready to do the work. It is also their country, after all.

The Government has introduced an emergency decree (OUG13) to change the penal law. The decree will make abuse of power a crime punishable by jail only if the sum involved exceeds 200,000 lei ($48,000). The news comes in just like a jurisprudence mixtape dedicated to Liviu Dragnea: the leader of the PSD and a direct beneficiary of such changes. The government plans, via a separate decree to be reviewed by parliament, to free about 2,500 prisoners serving sentences of less than five years, invoking overpopulation in prisons as an excuse. We have embraced abuse in public office just as lightly as we’ve embraced public urination. I am beyond hope. I go on writing another email, and then a post on Facebook, another email. I want to be heard. We all want to be heard. One of my friends sends five messages to my phone; another writes an essay. We all want to speak, somehow, to each other and to the world. We go back to the writers that we love. They spoke to the world.

The press uncovers that emergency decree OUG13 has been secretly passed in a government meeting. In an hour it was made public, published in the Monitorul Oficial. What I feel is beyond rage. I put on my cap and coat and take to the streets. By midnight, 10,000 people have gathered in front of the Government Building in Victoria Square to oppose the decree. It’s stone cold outside: 10°F. People swarm in. The crowd is getting louder. The national flag waves in the frozen sky. This is unacceptable, people keep repeating. Thousands of voices uttering the same words: a chorus of steamy mouths pleading for justice. They speak so loudly. They speak in my voice. 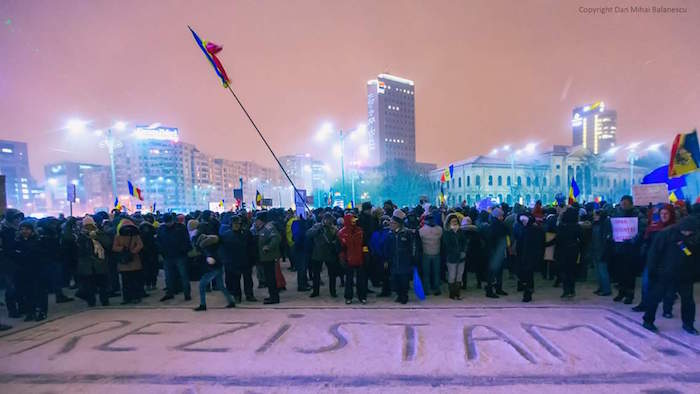 Massive protests begin in Romania against a Canadian company that has been trying for more than 15 years to get permission to extract 300 tons of gold from Roșia Montană, a picturesque village in a historic area of western Transylvania, by using thousands of tons of cyanide—permanently altering the ecosystem of the area and damaging Roman-era mining shafts. There are 5,000 people, then 10,000, 15,000, 25,000. The crowds keep getting bigger and bigger. The protests go on for over a month. Wake up, coffee, work, protest. Every day. For over month.

Something has awoken in all of us. The somnolent giant of action stretches her legs and arms and keeps one eye open, one giant throat clear, ready to say it again. The Roșia Montană mining project is stopped. Romania is making an effort to integrate the village in UNESCO World Heritage sites.

I’m having a beer with my friends. A sour beer I think, light on the tongue, heavy on the brain. We check our phones. All of us have received notifications from news websites. A fire has started in Colectiv, a club in Bucharest. Colectiv? I think. I was just there last week. Goodbye to Gravity was playing that night. Our feeds gets cluttered. Tens of firetrucks and police cars secure the area. Smoke, chaos, uncertainty. Unidentified people. The first reports come in: 10 dead, 120 wounded. By morning: 32 dead. Messages start pouring in: Are you OK? Emails start piling up: God, are you OK? The final tally: 64 dead, 147 injured.

The authorities had given the club a permit to function despite incontestable safety issues. There are tens, hundreds of places like this in Bucharest. We call, we message each other. The voice of fear speaks three words only: Are you OK? We have coffee, we go to work, we take to the streets, we shout: #corruptionkills. 35,000 people flood University Square. We are all wearing dark colors. One in three people on the street knows at least one person who died in the fire. Photographers, journalists, band members, promoters—people we love. I knew four of them, I laughed with three of them, I danced with two, I only got to hug one. People carry photos of the dead around. Hands tremble, voices tremble, in pain and in anger. #Corruptionkills! Victor Ponta, the Prime Minister resigns. Liviu Dragnea takes over the lead of the PSD. The government changes. The legislation changes. A week later we have a silent march: 15,000 people walk the streets to the club. Their silence is louder than anything I have ever heard. The sleeping giant is wide awake: #corruptionkills she screams, we are fewer but we are together, she comforts.

Reporter: Mister Prime Minister, do you intend to abate OUG13?

No. Loud and clear, one word, the absolute negative all dressed up in a deep blue suit speaks the language of politics.

150,000 people rally in Bucharest, 300,000 all over the country. We are angry but hopeful. Thousands of messages rise above our heads, written in ink, in magic markers, in watercolors, in magic tape. This is the language we are all just learning to master. People bring hot tea and sandwiches and coffee and pies to share. We believe in justice. We feel the need to protect it in our bones, to scream it from our lungs.

The government holds an emergency meeting on a Sunday. They decide to abate the emergency decree. No!, the street answers, loud and clear: No, not enough! 300,000 people in Victoria Square in Bucharest, 600,000 all over the country. This, in a country of 19 million. We arrive around 8 pm. There is no more room in the square. Giant messages are projected on the buildings around us: #resist #resign #dontbeafraid #weseeyou. 9 pm: everyone turns on the flashlights on their phones and raises the light toward the sky: 300,000 guardian fireflies shedding their light on the opacities of corruption. The resounding, illuminating cry for justice: perfect pitch! We hold two minutes of silence for the ones fallen in the 1989 revolution, for the ones swallowed by the fire in Colectiv, for our own. All of them are part of the alphabet we now know, the one we need for speaking freedom, for speaking justice, for speaking friendship, for speaking collaboration, for speaking them into our lives. 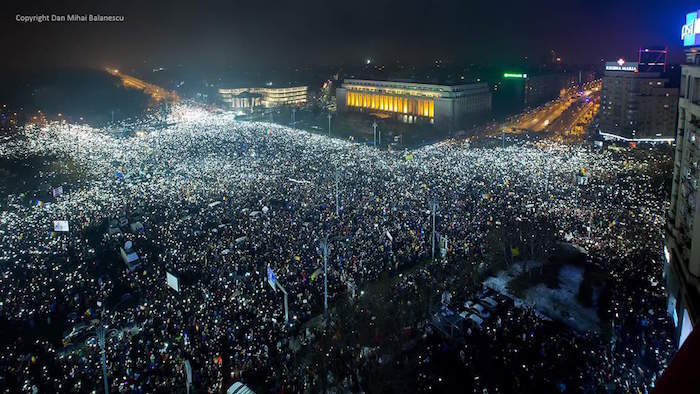 Florin Iordache, the Minister of Justice resigns. But this is such an isolated dialect of the language that we speak.

I moved to Bucharest in 2004. My college professors always told me to speak louder, that they could barely hear my voice. I took my tests in writing if I had the choice, no volume needed for my beliefs. My friends told me to talk louder, that they wanted to hear me. We all had to learn our frequencies, to speak and to listen, to tune into each others voices, to the voices of strangers on trains and on the streets, in coffeeshops, in the institutions of power.

There are millions of us who have been tuning in for years now. We know the vocabulary and the grammar of democracy. Many of us you saw as dots on the photographs on the pages of the New York Times; many of us spent at least ten nights on the streets in freezing temperatures. Most of us do not contest the legitimacy of the parliamentary elections, but rather the competence of this particular government. Some protestors voted for PSD and are now feeling deeply unprized. Most realize that these protests will not solve everything. There are millions of us, and we have learned to speak out loud. We are not irrational optimists; we are not incurably naive; we are not riotous hooligans. The protests are not about being restless and pointlessly vocal. They’re not about politics alone. They’re not about trust alone. This is not about a pure gut feeling, and it’s not about an academic debate. It’s not about platforms, and it’s not about anarchy. It’s not about right or left, but right or wrong. 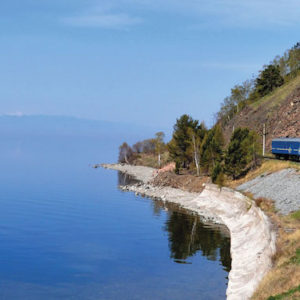 Writer Rosa Liksom boarded a train in Siberia this past November and stayed in compartment no. 6 once again. The same trip...
© LitHub
Back to top
Loading Comments...