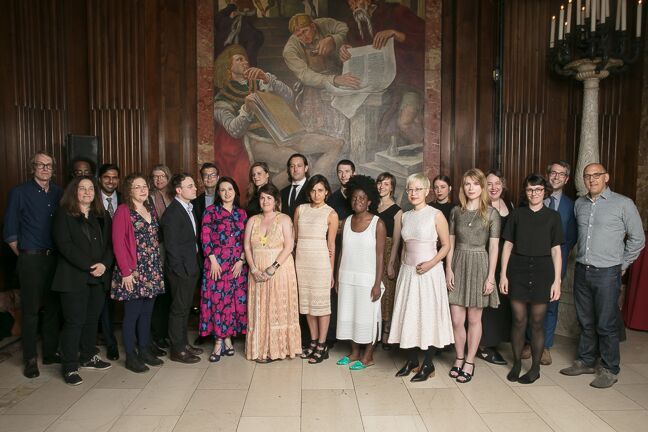 Only once a decade does Granta dedicate an issue to young American talent by choosing 20 novelists under 40 to highlight. This year, the young talent was so overwhelming that they made it 21; in 2017, we probably need an extra one for luck. Writers, editors, and publishers gathered in the McGraw Rotunda at the New York Public Library on 42nd Street to toast the winners amidst adorable and ubiquitous appetizers (like miniature avocado toast), dark and ubiquitous murals, and a very large open bar. Lit Hub already asked some of the winners the important questions, like what they think the great American novel is and who their favorite late bloomer is. What could I scoop them on? I decided I’d probably just find out everyone’s favorite cocktails.

Esmé Weijun Wang’s favorite drink is an Old Fashioned, and she was wearing a vintage dress bought online from Etsy (a secret clothing goldmine). Chinelo Okparanta was in lacey gold and had her drink answer ready: a tie between a caipirinha and a gin and tonic. We all shared horror stories of caipirinhas gone wrong, and Chinelo agreed that they were tricky, which is why she had a backup answer. She’d driven in four hours from Pennsylvania and was just glad she didn’t kill anyone.

Ottessa Moshfegh looked elegant in her crochet sleeveless dress, her hair cropped just under her chin. I asked how she celebrated making the list. “I celebrate every night,” she said, “so I didn’t do anything that special.” She did emphasize she was very happy for this particular story to have found a home and that she got to put faces to names for the rest of the group. I asked Emma Cline if she was the youngest on the list, having noticed her birth year was 1989. She shook her head and tugged me over to Yaa Gyasi. “Yaa, how old are you?” she asked. Yaa is, in fact, months younger than Emma. I asked her about that photoshoot she did for Vogue. “It gave me a new respect for models,” she said. “It’s harder than it looks!” (She likes whiskey gingers.)

Peter Blackstock, editor at Grove Atlantic, told me he’s ready to be over 40. “But you seem so young-hearted!” I said. “Yes, but I’m very gray-haired.” Jessie Chaffee was there; we’d both just seen finished copies of her book on social media, but even she hadn’t seen them yet in real life. She told me her favorite cocktail is an aperol spritz, which reminded me that despite the gloom of the rainy night, summer will come.

At speech time, the Granta team seemed especially enthusiastic. Sigrid Rausing introduced the original editor of Granta, Bill Buford, who spoke about the excitement of finding a new voice. “It might be exciting to have the new Don DeLillo or the new Philip Roth out—but there’s nothing like new talent.” He started extolling the wonders of his old assistant, Cressida Leyshon, before realizing she was in attendance. To say he was happy to see her would be an understatement and wouldn’t accurately describe the kind of scream-squeal he let out. Ben Marcus took the mic to read the list of 21 names, which he said he hoped would take an hour and a half because he wanted us to savor them. Reading the writers the past year made for “a summer filled with resentment and envy—crippling jealousy,” he admitted happily.

James Yeh walked in after the speeches in a leather jacket, saying he’d been stuck biking through the misty rain, and quickly grabbed two tiny Reubens off a tray (a good entrance). We spoke about how, hmm, aggressive it was that the program printed each writer’s birth year under their name, so it was exceptionally easy for all the other writers in the room to compare life achievements. Mark Doten opted to tell me a cool fact before a cocktail. “Did you know a whale’s heart is as big as a Volkswagon? Did I steal that from an Amy Hempel story?” He likes bourbon on the rocks with a splash of soda. I’ve interviewed Anthony Marra twice over the Internet but had never met him IRL until this night. He told me that he celebrated with his girlfriend in Oakland by going to a very fancy ice cream shop, the kind with liquid nitrogen on hand. Karan Mahajan was looking dapper in a navy blue suit, and said he liked mezcal—“I know, I know!” he said preemptively of its trendiness, but that he’d been an early adopter of it after time in Mexico City. While talking to Chris Parris-Lamb, we tried to beckon his client Garth Risk Hallberg over. Garth pointed to himself, then, to confirm we were gesturing to him, and proceeded to stay in place. When he finally passed by he said, “I only respond to crying. If you’d been crying, I would have come over,” and that he was striving for unusability in his quotes, hoping to make Chris explode. “Hey, I was on-script for months!” he said. That seemed fair to me.

It was an early party, so we were all outside the library just before nine, debating where to go next, since everywhere was far (we were in midtown). We ended up at an apartment in Soho with dream bookshelves, floor-to-ceiling with a ladder attached, which Hermione Hoby offered to push guests on. “Come on,” she said, “it’s as fun as it looks.” 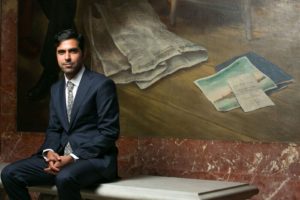 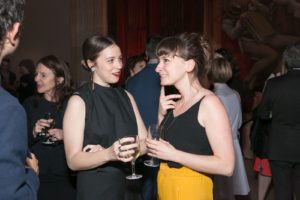 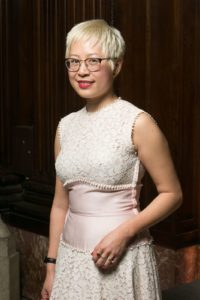 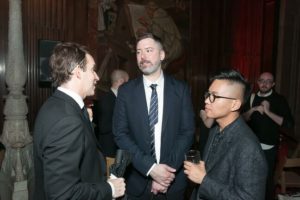 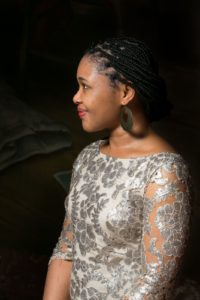 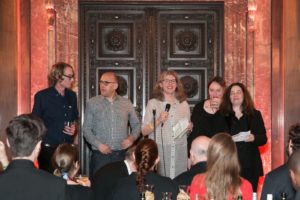 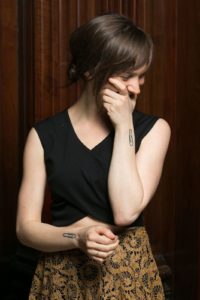 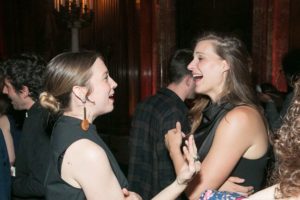 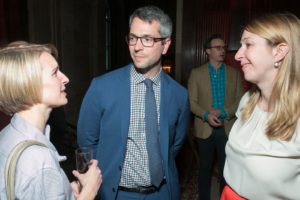 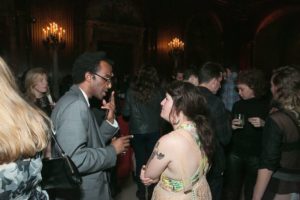 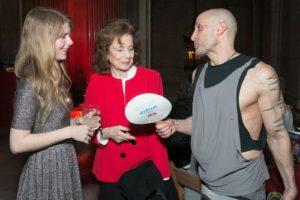 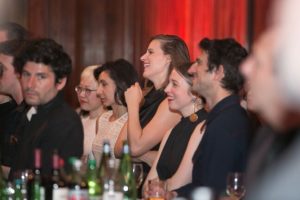 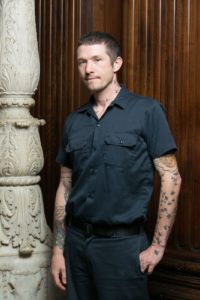 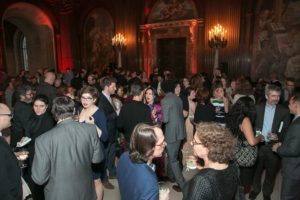 The McGraw Rotunda at the NYPL 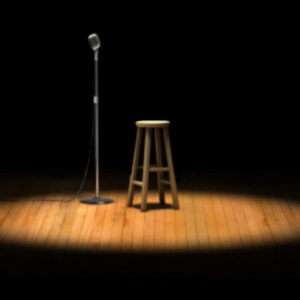 I. You are different By the time I reached my tenth birthday, I had lived on three continents. The Gulf War, my parents’...
© LitHub
Back to top
Loading Comments...