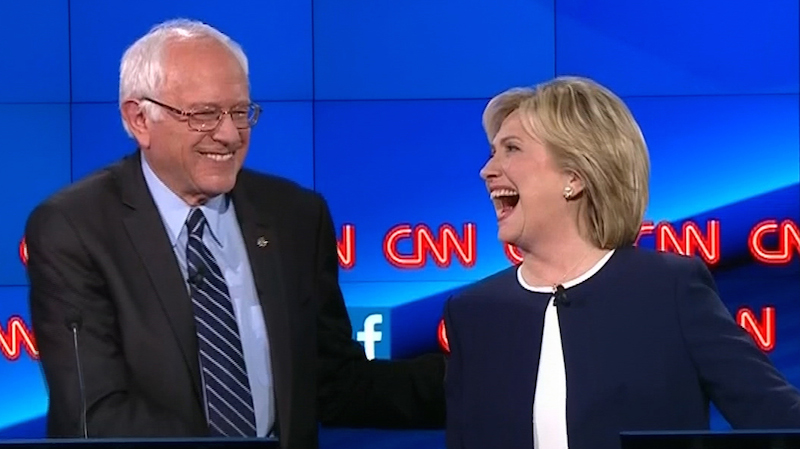 Whoever Did It Best Is Today’s Winner!

The week leading up to the New Hampshire Primary offered the presidential aspirants from both parties ample opportunity to show off their skills in the use of deceptive language (or, as we prefer to call it, Spinglish), with the Democrats holding their fifth debate of the campaign on Thursday night, and the Republicans countering with their eighth contest on Saturday. As official Spinglish-English translators for Literary Hub, we are pleased to announce that the candidates did not waste these opportunities. Here are the details:

“Very artful smear.” This exquisite characterization by Hillary Clinton of Senator Sanders’s repeated “insinuations” and “innuendo” about her accepting donations and speaking fees from interest groups made Sanders’s quite straightforward statements about the influence of big money on politics seem like a nasty, underhanded personal attack. It gets our prize as the best backhanded insult of the week.

“The hedge fund guys… are trying so hard to stop me.” In a more proactive attempt to assert that she wasn’t being unduly influenced by Wall Street, Hillary Clinton made this statement, which is somewhat undermined by the fact that hedge fund managers in Philadelphia did not try all that hard to stop her from attending a fundraiser hosted by, yes, a bunch of hedge fund guys, in their fair city on Wednesday, January 27th

“We never said, never said that somebody, a newspaper endorsed us that did not. What we did say is blah blah blah blah was said by the newspaper.” Senator Bernie Sanders offered this defense when moderator Rachel Maddow confronted him with the fact that the Nashua Telegraph had accused him of “falsely implying in an advertisement that they had endorsed [him] when they did not.” “Just to follow up on that,” Maddow responded drily, “the title of the ad in question was ‘Endorsement.’”

“I will look into it.” In a comment he sent to the Washington Post, Stefan Kaitshick translated this assurance, volunteered by Hillary Clinton after Chuck Todd asked her if she would be willing to release the transcripts of all her paid speeches, as, “Are you crazy?”

“We’ve had seven years with… a commander-in-chief that is unwilling even to acknowledge the enemy we’re facing.” Ted Cruz continues to insist, as he did again with this comment, that President Obama’s failure to utter the specific phrase “radical Islamic terrorism” constitutes a refusal to focus on defeating ISIS. Actually, writes Fareed Zakaria, Obama made the decision not to use this term “out of deference to the many Muslim countries and leaders who feel it gives the terrorists legitimacy.” Seth Meyers noted recently on his late night television program that the president did use the words “radical,” “Islam,” and “terrorism” in the course of a speech he made in December, “he just didn’t use them in the right order. Which would be a problem if it was a spell and he was Harry Potter, but he’s not, so it isn’t.”

“The insurance companies are getting rich on Obamacare.” With this charge, Donald Trump added his voice to the Republican chorus deriding the Affordable Care Act. Whatever the merit of other anti-Obamacare complaints, this one has little basis in fact: many insurance companies are actually incurring deficits on plans sold through the health exchanges set up under the new law. United Healthcare recently announced, for example, that during 2015 it lost $720 million in “individual exchange-compliant business.”

“I’m not going to use this opportunity to…” Ben Carson invoked this Spinglish phrase in the service of pledging not to do something that, of course, he then proceeded to do—“savage the reputation of Senator Ted Cruz.” The savaging Carson announced he was above taking part in was a “very disappointed” response to a last-minute attempt by the Texas senator’s campaign to poach Carson voters in Iowa by intimating, falsely, that the retired neurosurgeon was suspending his campaign. Carson followed up by denigrating “Washington ethics” (presumably Cruz’s), which he defined as doing “what you need to do in order to win.” Washington Post reporter Callum Borchers immediately branded Carson’s coinage “the sequel to ‘New York values.’”

“the highest taxed country in the world.” Donald Trump used this term to describe the U.S. in the course of arguing that our nation desperately needs his tax-cut proposals. But the truth is that we’re far closer to being the lowest taxed country than the highest. According to the Organization for Economic Co-operation and Development (OECD), the U.S ranks 27th

out of 30 industrialized nations in tax revenue as a percentage of gross domestic product. In 2014, the latest year for which such data is available, only South Korea, Mexico, and Chile could boast tax rates less onerous than those of the United States.

“That’s because he got Ben Carson’s votes, by the way, but we won’t say that.” After Ted Cruz used his closing remarks to brag about his victory in Iowa (a win he attributed to voters’ “putting country and our children above cronyism and corporate welfare”), Donald Trump doubled down on Ben Carson’s refusal to question Cruz’s morality by asserting that the Texas senator would have lost the Caucuses if not for his fraudulent behavior, and then promising he would never make such a charge.

[Note: Republican candidate Jim Gilmore won exactly 12 votes in the Iowa Caucuses, a tally which, needless to say, was not impressive enough to earn the former Virginia governor a spot in the eighth Republican Debate. But, despite garnering 12,993 fewer votes than the combined total earned by Rand Paul and Rick Santorum, both of whom were so discouraged by the Iowa results that they suspended their campaigns on the spot, Gilmore managed to spin his showing as a major victory. “Started out as 1 of 17 GOP Candidates,” he tweeted exuberantly. “[N]ow with Rand Paul & Rick Santorum out, 1 or [sic] 9.” Commented “Bobby Big Wheel,” also on Twitter, “It’s his finest moment and the tweet has a typo.”]