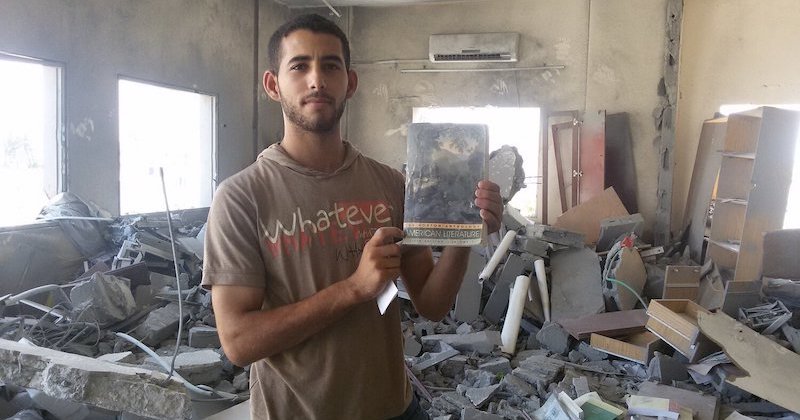 The Palestinian poet Mosab Abu Toha has been denied entry to Israel to interview for the U.S. visa he needs to return to his graduate program at Syracuse University.

As reported by Inside Higher Ed earlier today:

Abu Toha, who said he completed one year of his program at Syracuse already before returning to Gaza to visit his family, also said he’d been granted a permit to visit the American embassy in Jerusalem for a student visa interview in June. But when he reached the Erez border crossing, he tweeted, “Israeli officials in the booth ordered me to return to Gaza. I re-applied for Aug. 1. But got Big NO.”

Syracuse confirmed that Abu Toha is a master of fine arts student, saying in a statement that it has “been in contact with the student to provide assistance and support and is working to help resolve the situation.”

Abu Toha, who was a visiting scholar at Harvard University from 2019-20, taught English at the United Nations Relief and Works Agency (UNRWA) schools in Gaza from 2016 until 2019, and is the founder of the Edward Said Public Library, the first English-language library in Gaza. His debut collection, Things You May Find Hidden in My Ear: Poems from Gaza, was published by City Lights Books earlier this year.

On Friday, the day Israeli air strikes killed at least 10 people including a 5-year-old girl, Abu Toha sent a series of harrowing tweets from inside the besieged enclave, where he was taking shelter with his young children:

Because there may be bombing tonight in Gaza, I’m telling my children that they may hear thunder and see lightning in the sky. So they better go to bed early if they don’t like these natural phenomena. For me, I’m sure it’ll rain, but whom is it going to soak with blood?

Gaza is under attack and children are freaked out. We all are.

With each attack, my children ask Qs I have no answer to.
If you’d ask 4 an example, I wanted to calm them down and said these are just fireworks. My son, 6yrs, directed a question to me:
WHERE ARE THEY MANUFACTURED?

Another falling bomb made Yazzan forget what he had asked.

In the past 72 hours, the Israeli onslaught on Gaza has killed at least 16 children, almost all of whom were, as Jehad Abusalim tweeted yesterday, “Born into a brutal blockade. Their lives defined by wars, bombardment, trauma, fear, poverty, isolation, and dehumanization by the rest of the world.”