Pola Oloixarac on the Ungoogleable Lightness of Being

Never before in history have there been so many ways to recall our lives and the lives that surround us. That’s not exactly narrating: but we do get narrated all the time. We can record, tape, revisit and stream our lives. Our credit cards and google searches track and register what we do, our phones’ GPS remember everywhere we set foot. The most menial things get registered and become data: the things we’d like to know, the objects we obtained or would like to obtain. The things we texted and were texted back to us. We do nothing, nowadays, without creating a phantasme, a phantom of ourselves.

We leave content everywhere. The data we leave behind is like the aura that surrounds a work of art, as Walter Benjamin had it. The Russian art critic Boris Groys comments* that, in our age, works of art are less about the art displayed, than about the metadata created around them: where were the objects made, what was the controversy created by the work, what did people say, who walked by, what was the thought process behind it. Hence, contemporary works of art are often actions that are documented, rather than exhibited; they’re not so much about an object or the work on its own. In the same way, we ourselves leave metadata behind, an aura that creates a phantom self with an accountability all its own.

It matters little if you are a millennial: the fact is we live in a millennial world. That means being engaged in a constant narrative of the self: We are the characters typing ourselves into the greatest novel ever conceived by any human endeavor of representation, Google. It’s an all-encompassing novel, with an ever-increasing cast of characters. We play ourselves, self-assigning witty lines and geolocating in dreamy poses. We photoshop our ideas and write down our looks. Careful narrators of whatever it is we think we should be, think or look like, we are personally invested in the methods of dissemination of our ego. We are also not careful at all: Google knows the porn we watch (aren’t those incognito windows ironic?), and holds the key to the metadata we leave behind us, our desires, patterns, friends, longings . . . we’re characters in the Google novel, from which we can never escape.

For each of its users, Facebook has the data equivalent of 400,000 pages of text. Google has 7 times that amount, around 3 million pages. They collect everything, even the things they’re not supposed to (credit card numbers, deleted data). The substance of our lives is continuously parsed, analyzed, and extracted to become part of storylines we know nothing about.

Our whole world depends on the power of something that, before becoming anything, is just a tapping on the keyboard.

To further this literary vocation, Google employs writers and poets for their products. I know this because I interviewed for one of these positions when they were about to launch their Google Assistant product in the Southern Cone; they were looking for a writer who could sound savvy in that part of the world. Google Assistant is organized by pre-written scripts, as are competing products like Alexa (Amazon) and Siri (Apple). The scripts we were supposed to write had the forms of answers, because the cues to GA, like our searches on google, are questions and demands. I had to do two characters: The Concierge, formal and helpful, and The Nutty Professor, funny, a tad eccentric, with the aura of someone massively intelligent. Our cues were gathered by robots. Because we, the characters inside the Google novel, perform for robots who parse, chart and organize our data. Eventually,

fake news will arrive in the voice of your Google Assistant, with whom you will have a much closer relationship with than, say, your creepy relatives on Facebook.

Did I mention #fakenews? The year 2019 sees History created by obscure demons lurking behind our keyboards, leveraging our innocent likes and faves for political doom. That’s the current narrative: our institutions are so fragile that they can be torched or changed by recondite hordes of tweeting armies and Facebook posts targeted at our internet lives, those thin creations spun from the narratives we make of ourselves. We imagine this performance of “being ourselves” is for other people, but our main readers are robots—robots reading our metadata, our ever growing phantasme. Our attention spans may have shortened, but the robots’ hasn’t.

In the first of his wonderful Six essays for the millennium, Italo Calvino considers this substance connecting us with the robots. If 100 years ago, somebody had said that all industry and human endeavor would depend on the flow of quanta so flimsy as the bit, few would have believed it. Even the monsters of steel are driven by it. The bit thrives in the most distant ecosystems: the bit is what makes human communication, governments, soft power and hardcore industry thrive. It’s ethereal and pervasive. Our whole world depends on the power of something that, before becoming anything, is just a tapping on the keyboard.

What is left of you, if you don’t write it? Do you live for you, or for the monster that writes?

What is this strange software of narrative, what does it need to take hold? We are used to thinking that life can be a source for fiction, but I think fiction is a source for life. Just as robots are driving the narratives, our own writing can be the software directing and molding the heaviness of life. The way software drives hardware, our writing project is the software that infuses life and gives it direction. That’s why you can, I think, starkly stated, change your life through writing. Even governments are swayed by the strength of fiction, why wouldn’t our lives?

In the dark hours, everything seems already “there,” impenetrable. But narratives—our narratives—can penetrate anything, even the thick of life. I don’t think your life needs to be specially interesting to be able to write. It’s the other way around: your life becomes interesting when you are writing. Writing impacts your life in ways that are mysterious and inextricable. Which parts of ourselves should be brought out to speak and murmur and shout?

What are we unleashing when we write? Can we strip the ego from the self, like a phantom thrown into the wild, as our metadata is stripped from us, and see what she brings back? What lives and what dies of the phantom surrounding us? A book hypothesizes an order to the world. It governs a reading of what surrounds us, and makes of us a particular character, the one guiding the narrative, telling the story.

As we get narrated all the time, we need to trust the lightness. The lightness of being, as Calvino had it, that allows narrative to navigate the thickness of the world around us, guiding us through it, making the best of it. Because writing bestows life on things and arouses life in things we thought dead within ourselves.

This can bring problems of its own, too. We may ask ourselves: do we live to write, or are we feeding the monster? You may not be sure if what you are doing is living or feeding the monster. The crust of the world is like a frozen lake, but under the lake there is a big eye watching. And life is a walk across the surface of the lake as the eye watches, lurking closely, changing your movements. What is left of you, if you don’t write it? Do you live for you, or for the monster that writes? Your brain holds secret wars against the dark, dead grain of life. Your brain secretes wars against life. But writing and being driven by your novel is like a drug, the most exquisite of drugs. The lightness of being from where writing springs.

This article was part of a talk given at MFA of the Americas in Florida. Special thanks to Teresa Carmody and John Freeman.

How the Algorithm Rewards Extremism 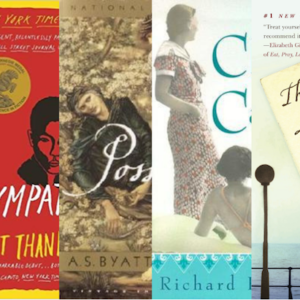