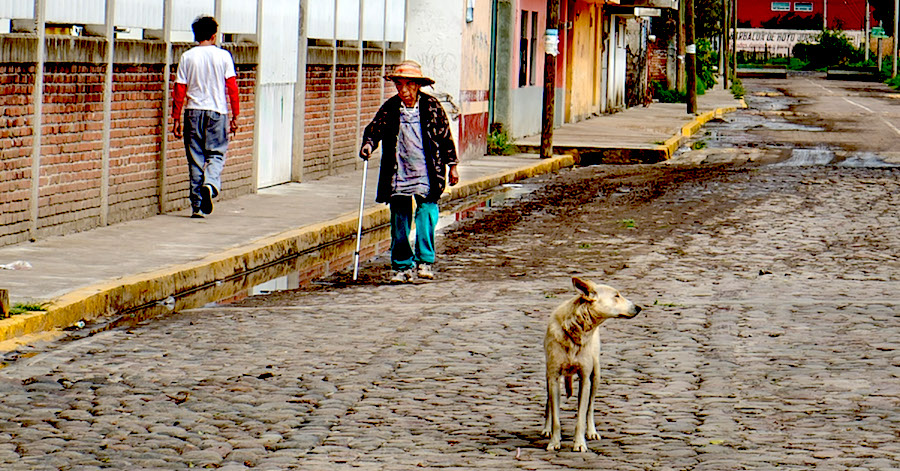 Here it comes, its gait bold and determined or else hesitant and subdued, depending on its experience in the world thus far. Here it is, making its way towards us, dodging cars, hugging walls, sniffing out the situation, on the lookout for voices or gestures that may grant some insight into a temperament. The stray dog. It must know what the human intends before coming any closer, whether he or she intends kindness or cruelty. It isn’t aware of the social contract between us but I am and I shall honor it as best I can, despite concerns about startling it away or frightening it into defensive mode. It takes a few steps forward, devours my offering, and vanishes back into the labyrinth of Mexico City.

Yet in London one rarely sees stray dogs. Not long ago, a Mexican friend who lives here too commented on how she misses seeing stray dogs in the background. This city feels somewhat empty without them, she said, like there’s something missing from the panorama. I remember being struck by her words and dwelled on them for a long while afterwards. If anything, I was thankful for their absence. Not because I don’t love dogs—I certainly do—but because ever since childhood the sight of a stray has nearly always triggered despair: where did it come from, where was it going, always hungry, always on the move. On family car trips I couldn’t avert my eyes quickly enough from the road: the sight of one run-over would haunt me for days. Yet I now began to think about how despite their precarious situation, so unresolved, they represent an indomitable spirit, and in this aspect too they are emblematic of our country.

Over the centuries, dogs have been an enduring feature of Mexican life and art. Long before the Spanish conquistadors arrived in the New World with their snarling wolfhounds and mastiffs, the breed most familiar to the Aztecs was the hairless black Xoloitzcuintli, or Xolo for short. In life it was a companion and foodstuff (indeed, a delicacy for the nobles), and often used to warm a cold bed at night. In death the Xolo was considered to be a guide through the underworld, and would carry the soul of its deceased owner in its mouth.

Yet the Spaniards who sailed over in the late 1510s and early 1520s used their hounds as a weapon of war, and transformed the dog from ally into adversary, a feared animal that would often tear its victims to pieces. Once the Conquest was largely complete and the dogs’ job for the most part done, they were said to hungrily roam the streets in search of prey, thus becoming, perhaps, the earliest incarnations of strays in Mexico. Since those times the dog has returned to being a creature man can easily subjugate, but somewhere within its scrawny figure resides a phantom of that battle.

When I turned in my new novel Sea Monsters last summer my editors commented with some surprise on the number of mentions of dogs in my book: 37. But they are a leitmotif of daily life, I explained, present in nearly every landscape and cityscape, a mobile part of the composition.

I describe the local dogs in Mexico City, where my narrator lives, both those who have owners and those who inhabit the collapsed ruins left by the September 19th, 1985 earthquake: a menagerie of strays, spectral cats with faint meows and mangy dogs who’d spend hours pawing at imaginary food in the crevices. I was also intent on depicting the beach dogs, one of the most memorable features of my trip to Oaxaca: The dogs in Zipolite may have been safe from city woes, yet all day long they wandered up and down the beach as if scavenging for something not provided by the landscape. In both cases these dogs evoke a sense of disquiet, a search for something beyond the here and now, and my adolescent narrator feels similarly restless and unfulfilled, although in her case she has a secure home and parents who look after her (if anything, she is after a less secure scenario that throws open the possibility of change).

A stray dog that has been given a name has a far greater chance of survival, Hannah Arendt famously remarked.

I wanted stray dogs to feature in my novel as a hymn to my country, to survival, and of course to the animals themselves. Yet looking back, on a more figurative level I also wanted them to exist as a kind of antidote to plot expectation (though what cultivated reader reads solely for “plot”?). Stray dogs proceed—seemingly—with only a vague sense of purpose; their presence creates a mood, feeds into an atmosphere, without signposting a major development. They may suggest movement, and appetite and desire, but they don’t impose action on a scene, they just are—and what is so wrong with that? Real life tends to be composed of quiet moments that fill the years between a handful of defining ones. A writer can choose to represent these quieter moments instead. A writer can favor meandering narratives, stray dog narrations one could call them, driven by something more subtle and inscrutable than “action.” Movement within a novel takes place, after all, on many levels.

Dogs were an important symbol for me while writing the book but they also represent a real concern. Mexico currently has more stray dogs than any other country in Latin America and the number is rising steadily. In recognition of their plight, a charity called Milagros Caninos erected the Monument to the Stray Dog at the side of an unfrequented road in the south-lying borough of Tlalpan in 2008. Most monuments in Mexico tend to be of heroic individuals empowered by battle yet this subject is skinny and forlorn, with a low-hanging head and jutting ribs, its body hunched over in defeat. The only battle it has won is that of narrow survival.

Every now and then a scribble of graffiti appears on its metal flanks, gradually washed off by the rain. On the base there was at first a plaque that read: “My only crime was to be born and have lived on the streets, or to have been abandoned. I didn’t ask for this, and despite the blows and indifference the only thing I demand is whatever remains of your love. I don’t want to suffer, surviving in this world is a matter of horror. Help me, please!” A stray dog that has been given a name has a far greater chance of survival, Hannah Arendt famously remarked. Unlike other strays, this imaginary dog was granted a name, Peluso, but even that failed to rescue him from oblivion. Last year the plaque was stolen, deemed more valuable as scrap metal probably, and the statue is currently in a sorry state.

I can’t help but wonder whether the mere fact of the monument’s existence, an existence minimized by its remote location and persistent neglect, captures Mexicans’ ambivalence towards this canine that has accompanied them over the centuries. During their peripatetic lives stray dogs are subject to the capricious behavior of humans, on the receiving end of kindness, cruelty and indifference. (Every December, for instance, hundreds are left behind by pilgrims at the Basilica of Guadalupe; the pilgrims feed them along the way, acquiring a companion for their travels, but after paying their respects to the Virgin, compassion is shed and they jump on a bus and abandon them).

A staggering 70 percent of dogs in Mexico have no real home. Solitary or in packs, they occupy the lowest rank, along with stray cats, of any urban or rural hierarchy. My sister and I would often feed the scrawny mongrels that wandered the unpaved streets of Contepec, Michoacán, the village where my father grew up, dogs he describes in The Child Poet as the color of the sun, of a yellow that seemed sprouted from the fields. “They would attach themselves to the first person who walked by, and for a while had an owner, until a door closed in their face and they’d go back to being no one’s dog.” We too were sometimes guilty of deserting an animal at the door; our grandmother already had her menagerie of cats, birds and dogs, and we weren’t allowed to add to it.

I wanted stray dogs to feature in my novel as a hymn to my country, to survival, and of course to the animals themselves.

Shadowing our steps or pursuing paths of their own, stray dogs lead a parallel existence to ours, and in cities seem to gravitate towards other beings who dwell in the liminal spaces of society. When my sister filmed her documentary Children of the Street, she was keen to depict the Mexican street children’s symbiotic relationship with the dogs who accompanied them day and night, sharing in their fortunes and misfortunes (speeding cars, predatory humans)—each a mirror of the other’s vulnerability but also a source of comfort and friendship.

In writer Juan Rulfo’s rural dramas, the barking of dogs acquires a spectral reality, largely ancestral, announcing a reckoning to come. Malcolm Lowry’s Under the Volcano concludes with the image of the tormented consul’s corpse thrown into a ditch, a dead “pariah dog” tossed in after him. More recently, the Belgian-Mexican artist Francis Alÿs made a video called “El Gringo,” in which a patchwork of mongrels on a dust road gather round the camera in an ascending chorus, their vigorous barks an almost comedic expression of territoriality. Here there is little doubt as to who belongs and who is intruding, though the different angles from which the video is shot suggest there the is more than one dimension to the conflict.

Even more than the long-suffering donkey, which in recent decades has all but vanished from the Mexican countryside, the stray dog endures yet rarely forms part of the action. Always present, always in limbo, its uncertain gait identifiable from afar, it shares our public spaces, infusing them with a noble life force, its own existence endangered yet its kind never in danger of extinction.

Chloe Aridjis is a Mexican-American writer who was born in New York and grew up in the Netherlands and Mexico. Her debut novel, Book of Clouds, has been published in eight languages and won the Prix du Premier Roman Étranger in France. Aridjis sometimes writes about art and insomnia and was a guest curator at Tate Liverpool. In 2014, she was awarded a Guggenheim Fellowship. She lives in London. 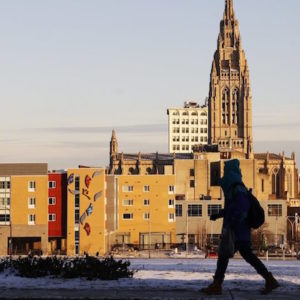 I forget sometimes that my parents and I were homeless for three months in 2001. Our landlord lived in Tampa, but decided...
© LitHub
Back to top