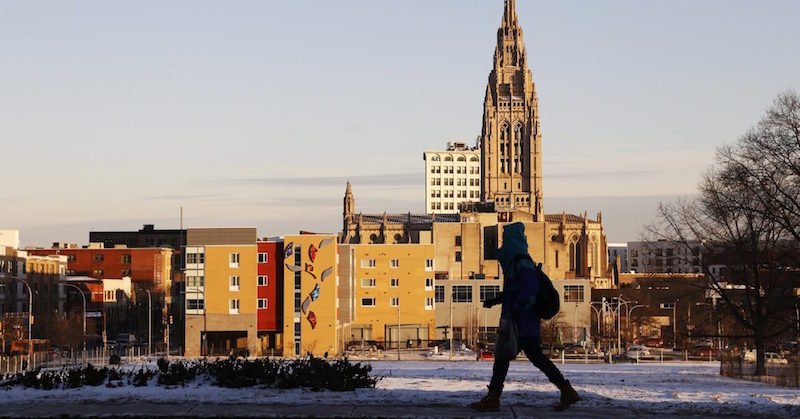 Damon Young on Growing Up with PTBD: Post-Traumatic Brokeness Disorder

I forget sometimes that my parents and I were homeless for three months in 2001. Our landlord lived in Tampa, but decided to move back to Pittsburgh and back into his house, and he shared this information with Dad six months before he planned to return. Which fucking sucked. Our home on Clinton Drive was a simple two-story brick house with three modest bedrooms, two baths, and a tattered green awning stretched over a forty-square-foot front porch, but after escaping Mellon Street, it felt like the Taj Mahal. Cozy sometimes has a connotation of slight condescension, a smirking and backhanded commentary on an item’s size. But for us cozy meant safe, stable, and settled, and this was the safest, stablest, and most settled my family had been in a decade.

Dad’s habitual joblessness ended, and he’d been employed at the same telemarketing firm for three years. My parents even finally had a car—a wolf-gray and whistle-clean 1995 Cadillac DeVille. Still, six months was more than enough time for my parents to find a new place and move. Dad, however, kept this information from Mom until a month before they had to leave. They weren’t able to find a new place in time, and they were forced to cram their belongings in a storage facility while crashing at Nana’s. This all happened my senior year at Canisius. I didn’t learn they’d lost the house until I was home for spring break.

In 2012, eleven years after that spring, a series of late paychecks from Ebony magazine (where I was employed as a full-time freelancer) began a string of financial setbacks that eventually led to the repossession of my car. After borrowing several hundred dollars each from Brian, my homegirl Liz, and a church’s credit union—and telling each of them my car was impounded by the police for unpaid speeding tickets because that was less embarrassing than the truth—I was able to get it back. But that experience left me with a fierce bout of PTBD—post-traumatic brokeness disorder. From then on, whenever I’m home and I hear the distinct beep . . . beep . . . beep of large trucks backing up in the street, my adrenaline and my anxiety spike as I fear it’s a tow truck coming for my car again.

Perhaps Dad was also suffering from PTBD in 2001. Maybe he’d been so used to being broke, and to having tenuous employment, and to navigating the world of overdraft fees and debt-collector-phone-call ducking that those habits and those fears stuck with him. And instead of just telling his wife about their unfortunate but less than dire predicament, he hid it from her for as long as he could, so possessed by the haunts of East Liberty that he couldn’t see anything but shame.

Maybe he was paralyzed by the thought of that impending doom. Maybe he did what I did in the weeks before my car was repossessed, when I’d ignore the relentless calls and letters from Ally Auto as if they’d just forget about me if I refused to acknowledge them. Maybe Dad thought that if he didn’t tell Mom about their prob

lem it would just wither away. Like the owner of their house was Candyman, and he’d only appear if you looked in a mirror and said his name five times. Or maybe Dad kept this information from Mom with the hope that he’d be able to fix it, somehow. Maybe he believed he’d be able to pull through in the clutch and just didn’t want her to worry about something he’d eventually handle. It felt like I was missing something. It felt like we were missing something.

Mom and Dad met on a blind date in 1975, and they came to each other heavy. Mom’s sister (my aunt Toni) was dating one of Dad’s niggas from college, and Aunt Toni—who also knew Dad from school (they all went to Knoxville College in Tennessee)—thought her baby sis would be a good match for him. Dad, who was named after my granddad’s brother Wilbur but is known as “Weeb” by everyone (except my grandma, who always called him Wilbur Allen as if she were calling his name from a porch after the streetlights came on) had already been married to and divorced from his college sweetheart. Mom, who was named after Vivien Leigh (Nana’s favorite actress) but spelled her name Vivienne, had a child—my sister, Jamie. She got pregnant while in high school and was subsequently sent, by Nana and Papa, to some sort of home in

Mom gave birth to Jamie, came back home, somehow managed to earn a scholarship to Carnegie Mellon University, and attended for three semesters but never finished. I’m not quite sure how my parents were able to find each other and then fall in love through all of that noise. Dad used to joke that he hooked Mom with roses and a batch of New Castle hot dog chili, but I think they both just needed a reliable Spades partner.

Dad and Mom were two of the brightest, funniest, wittiest, worldliest, sharpest, and blackest people I knew. Dad taught me how to write. He’d revise and rewrite the take-home essays assigned to me in seventh and eighth grade. I’d—well, he’d— get A’s, and then I’d eventually attempt to mimic the stylistic choices he’d made and the flourish he’d peppered his sentences with. He taught me words like permeate, conniption, obtuse, and behoove, and I’d incorporate them at recess with moderate success (“I BEHOOVE YOU TO PASS ME THE BALL”).

I also learned from them that it was bad luck to place a hat on a bed or a couch. And where to position a motorized fan on a cracked windowsill in the summer so that it best replicated an air-conditioning unit. And that if a black man was the first person to enter your home on New Year’s Day, it was promised to be a good year. And that respectability politics were a fucking fraud. “Don’t break yourself trying to appease white people,” Dad told me while we were sitting at the dining room table a day af

ter they took me to see Malcolm X on my thirteenth birthday, and an hour after I lamented to them that Tommy Weismen’s parents wouldn’t let him come to my birthday slumber party because East Liberty was “the ghetto.” “Martin Luther King was killed in a suit.”

Maybe Dad thought that if he didn’t tell Mom about their problem it would just wither away.

I just didn’t understand how these beautiful and talented people kept finding themselves in hardship. And it felt like whatever it was that was infecting them—whichever invisible and arbitrarily cruel entity was committed to keeping them an inch away from exhalation—was contagious, and I wanted no part of that. Or them. I still loved them. I was just tired of seeing them like this. And tired of them seeing me see them like this. When they picked me up from that Greyhound station and told me about the house, I wanted them to drive me back downtown so I could hop on the bus and get back to Buffalo.

The source of that invisible force and that unstoppable inertia that kept teasing them, that kept allowing them to break through for a stretch before tripping them up and pulling them back again, that would lay latent until it saw fit to remind them it was there, is obvious to me now. White supremacy is so gargantuan and mundane that sometimes its existence and its proficiency can’t be measured, addressed, or even seen without a stark change in perspective. It isn’t like gravity. It is gravity. It is a ceaseless pressure intended to keep blackness ground-bound and sick.

And it wasn’t that my parents’ blackness itself was pathological. It wasn’t. It never has been and never will be, for anyone. It’s just that blackness in America meant that setbacks, like my parents getting their car stolen in 1990, were tsunamis.

It meant that there were and would always be environmental factors they needed to overcome. It meant a permanent cushion-lessness where tripping and falling left broken bones instead

of bumps and bruises. It meant supporting and relying on an entire economy dependent on that perpetual vulnerability. It meant emergency room visits and Rent-A-Center living room sets. It meant payday loans and phone bills in toddlers’ names. It meant standing in line at Money Mart and “ridin’ dirty” for so long you forgot what it meant to be clean. It meant participation in that self-mutilating symbiosis was necessary if you wished to survive. It meant that, in order to combat and withstand this force, they needed to be perfect. Or lucky. Or perfect and lucky.

For my parents, it meant an aggregation of tiny little defeats culminating in twelve weeks on the couch in Nana’s frigid and mildewy game room, sleeping next to stacks of ten-year-old Jet magazines and boxes of artificial Christmas trees and broken ornaments.

I slept in that game room with them, in a tree-bark-brown Barcalounger that had belonged to Papa and hadn’t been sat on that much since he died in 1985, and I’d rock and seethe myself to sleep. I was too selfish and too twenty-one then to be as empathetic as I needed to be; as they needed me to be. Too hoggish to realize that I was able to return to my off-campus town house with my bomb-ass-poetry-writing-ass-nigga starter kit in Buffalo if I pleased specifically because of them and the sacrifices they made. Too myopic to be proud of them for fighting that behemoth long and hard and fierce enough to eke out some safe space for me in East Liberty and at St. Barts, Penn Hills, and Canisius. 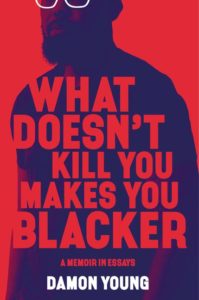 Excerpt from What Doesn’t Kill You Makes You Blacker by Damon Young. Copyright 2019 by Damon Young. Excerpted by permission of Ecco, an imprint of HarperCollins Publishers.

Damon Young is the cofounder and editor in chief of VerySmartBrothas, a senior editor at The Root, and a columnist for GQ. His work has appeared in outlets such as the New York Times, the Washington Post, CNN, MSNBC, Al-Jazeera, Slate, Salon, The Guardian (UK), New York Magazine, Jezebel, Complex, EBONY, Essence, USA Today, and the Pittsburgh Post-Gazette. 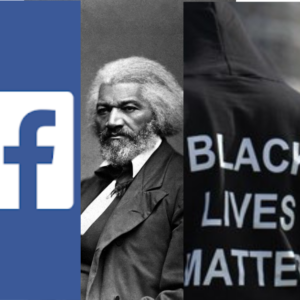 Every year at Rice University I teach a course on Cold War history anchored around the US-USSR square-off that took place...
© LitHub
Back to top
Loading Comments...