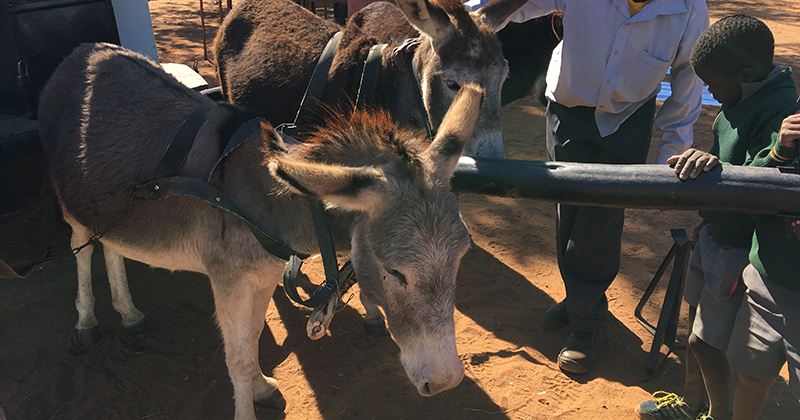 A Look at the Country's Rural Libraries and Resources Development Programme

The road leading to Siyangaya Primary School, in a rural part of Zimbabwe’s Tsholotsho District, is wide and dusty. It’s the penultimate day of school before a month-long break, warm and sunny in August, despite this being winter. Several kinds of travelers move along the road: a school bus carrying green-uniformed schoolgirls, the occasional herd of cattle whose bells ding musically, four-wheel drives suited to the uneven terrain, and villagers who live along the school route.

Also trudging along this path are four donkeys, carting behind them what looks like a blue playhouse. This is no mini-house, however; it’s a mobile lending library that can hold up to 1,000 books. As it makes its way toward the school, children and adults stop to wave to the driver, who receives a clamorous welcome once inside the school gates. While the library is open, the donkeys are let loose to graze on the school grounds. 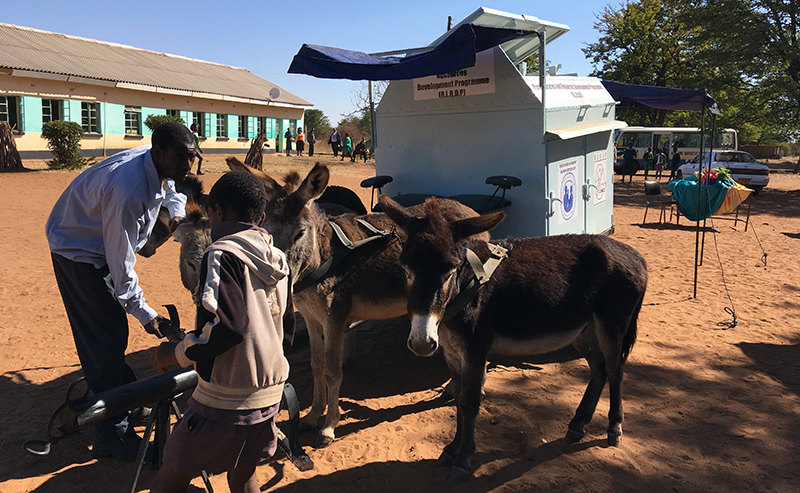 Harnessing the donkeys in preparation for going on the move.

Donkeys are valuable livestock in Tsholotsho, a largely agricultural district of Zimbabwe. They carry heavy loads, they’re well-suited to unreliable roads, and they aren’t costly to maintain. But the uses of donkeys aren’t limited to farm products. Donkeys are also—in an educational project of the non-profit Rural Libraries and Resources Development Programme (RLRDP)—used as mobile libraries. The specially designed carts, pulled by teams of four donkeys, can reach remote areas more cheaply than cars, while carrying more books than bicycles.

Dr. Obadiah Moyo, the founder of RLRDP, credits the organization with creating the world’s first donkey-powered mobile libraries in 1995—a model that has since spread to Ethiopia and Tanzania. He designed the carts himself. These small, roofed, two-wheeled units are divided into lockable compartments, with space for up to three rider-drivers. Refinements have been made over the years, including springs under the carts to ensure a smoother ride, and space to insert tarps and poles for creating canopies in locations without shade. The idea is for each cart to be a self-contained unit. 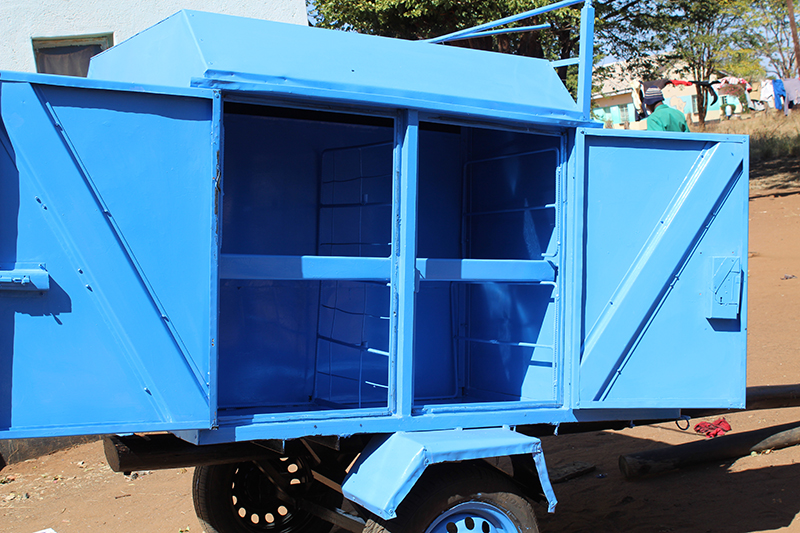 An early-model library cart under repair.

Increasingly, this has also included integrating the global library trend of facilitating internet access. Three of the RLRDP’s 15 donkey carts are equipped with solar panels which supply electricity for charging phones and powering a computer and printer. The aim is for library patrons to be able to read books online, remain updated on news, and perhaps publicly screen movies. Teachers, meanwhile, can use the computers to plan lessons and relate textbook learning to current events. Moyo and school staff hope to expand the stock of computers and turn the mobile carts into true multimedia libraries.

It’s a laudable aim, but the scale of the operation is necessarily limited. The cart that visits Siyangaya rotates between three other local schools as well as various community sites, spending between four hours and a full day at each location. Each cart services over 1,600 people, so the time any one patron can spend with the single computer is scant. Thus, it’s not surprising that many of the Siyangaya students have never touched a computer, especially in a place where internet, if available, is accessed via smartphones.

Dr. Moyo (a name that means “heart”) still travels tirelessly around the country to oversee the 300+ libraries run by his organization. He is also working on an IT manual for rural libraries, a follow-up to the RLRDP Manual for Rural Libraries, and aspires to write biographies of educators who influenced him—as well as, someday, a novel. In his own reading, he favors Danielle Steel and Doris Lessing. His attitude toward books isn’t snobbish. 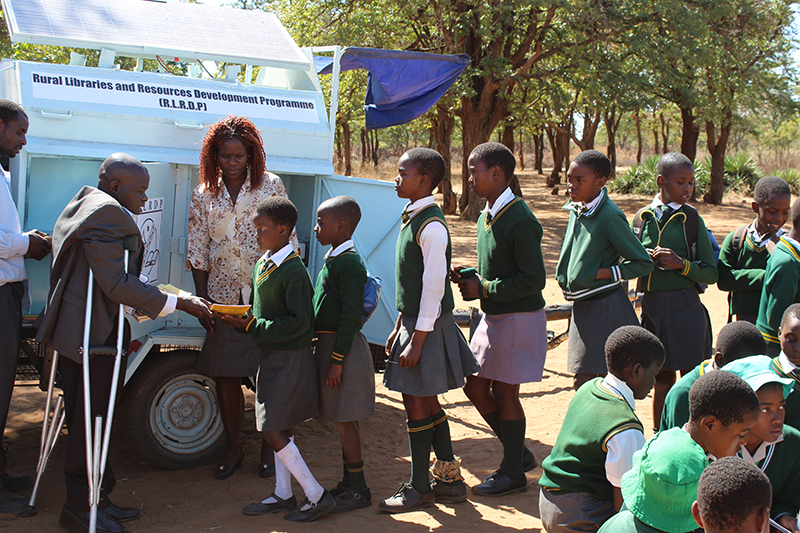 While libraries in a number of high-income cities are facing funding challenges, challenges are compounded in rural and resource-limited areas. But like librarians elsewhere—who are little short of heroic whether they’re providing temporary refuge to the homeless, training to respond to heroin overdoses, or resisting the erosion of civil liberties—library advocates working in constrained circumstances have proven resourceful and dogged.

The RLRDP model depends on relationships with schools, which Moyo considers the focal points of rural Zimbabwean communities. He says of each mobile library, “The custodian should be the school…but it belongs to the community.” The organization only begins operating in areas where there’s local interest, and each community (through a school or library development committee) devises its own way of making its mobile library as relevant and useful as possible. In some areas, this might involve a bicycle rather than donkeys. In communities where there’s demand from elderly or disabled readers, the mobile library might visit them specifically. Most of RLRDP’s libraries are fixed rather than mobile, where space and logistics allow for a permanent location. Mepa Dube, head of Soluswe Primary School, says that before RLRDP, “Only the urban schools were valued”; he’d like to see an expansion of capacity with a library pulled by a tractor. 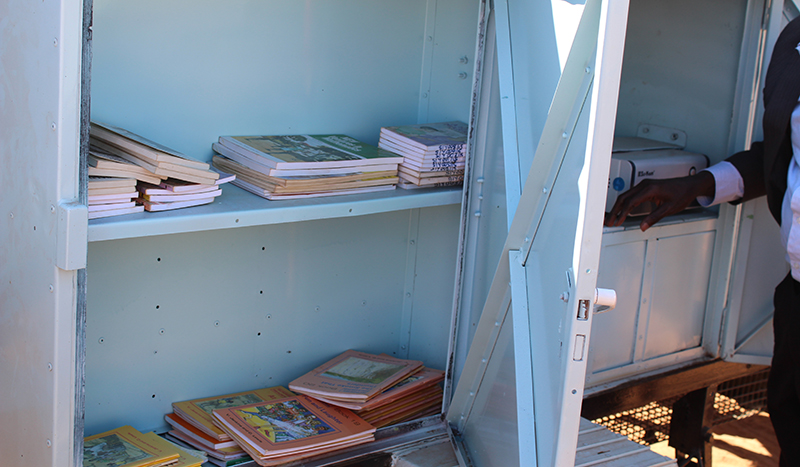 Inside the cart: compartments for books and a solar inverter.

Arrangements for community funding contributions vary across sites. At Siyangaya, a few dollars per student are used to pay the donkey cart driver. These come from school levies—currently $60 per student per term (with three terms per school year)—which are a substantial cost in the very low-income rural regions of Zimbabwe. Siyangaya’s student body is far from wealthy; many students have holes in their shoes, and girls collect water and prepare meals between lessons. The school levies are also used to cover all sorts of extra-curricular student activities, but school staff say that fees are sometimes waived for students who truly can’t afford them. With Zimbabwe’s education system chronically underfunded, it’s argued that these levies are unavoidable. Yet the common practice in sub-Saharan Africa of levying school fees, along with expenses like mandatory school uniforms, means that free, public primary school education isn’t actually free in practice.

Moyo estimates that it takes about $150,000 a year to cover the operating costs of RLRDP, and the charity has received financial support from the Latter-Day Saints and Save the Children. As for the books themselves, many of them are supplied by Book Aid International. RLRDP also receives hefty discounts from publishers. But as with so many educational non-profits, financial donations are much more useful than donations of books. Some of the English texts they’ve received are overly advanced for kids whose primary language is Ndebele, a partial click language. (Bertolt Brecht’s Galileo, for instance, would be a tough sell for a 10-year-old in any country, in any language.)

RLRDP would prefer to stock the libraries with more books by Zimbabwean authors, especially those written in Ndebele and Shona. The Siyangaya school librarian, Romeo Moyo (no relation to Obadiah), says he would love to see more books on IT and other practical subjects. Being able to select their own stock, rather than being partly at the mercy of donors, would maximize the usefulness of the library. As Passmore Moyo (no relation to Romeo or Obadiah), a primary school teacher and author, says: “We want to see a situation where we who receive donations of books will one day write them and donate them.” 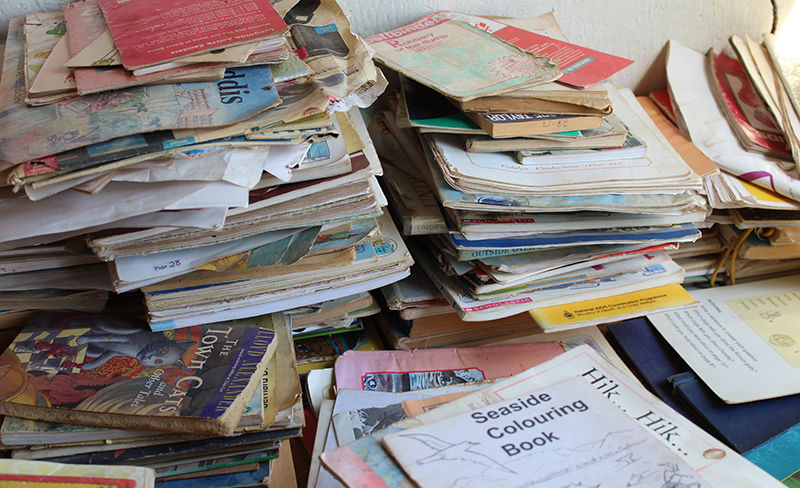 Book donations at Siyangaya Primary School waiting to be sorted.

Obadiah Moyo is proud of the achievements of RLRDP. He says that school pass rates have improved substantially since the mobile libraries started circulating. There have also been vocational benefits, such as a beekeeping project started by young people not currently attending school, inspired by the beekeeping books in their local library.

Yet employment in the region remains chronically low, and there’s a mismatch between educational qualifications and the kinds of jobs that are available. (A recent example was the opening of a KFC in a posh part of Bulawayo, Zimbabwe’s second-largest city. It sparked an outpouring of job interest, and then a scandal over alleged ethnic bias in hiring.)

Still, it isn’t necessary to measure value of books and libraries by these criteria. Reading doesn’t need to be a linear stepping stone to employment or further education, and a rural mobile library shouldn’t be expected to have all the answers. Sandra Ndlovu, who recently finished high school, articulates just one of the many feelings that the mobile library cultivates: “If we are lonely at home, we have time to come to the site.”

Anyone interested in learning more about RLRDP, including how to support its activities, can contact Obadiah Moyo at obbamoyo@gmail.com.

Growing Up Gay in a Proud Southern Family 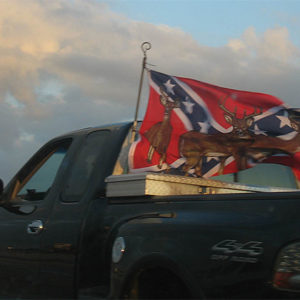 Growing Up Gay in a Proud Southern Family

When I was six, we moved across town to a nicer neighborhood called Budleigh, where our new L-shaped ranch house aspired...
© LitHub
Back to top
Loading Comments...