The following is adapted from Why Did I Get a B?.

Once, not that long ago, when I was teaching at Theatre High School of Brooklyn (THSB), a pretty terrible public high school in South Brooklyn, I experienced what I consider to be the most despairing moment of my professional life (thus far). While it was one of many, very many, moments of despair I would feel as a teacher, and particularly at that school, it remains most vivid in my mind because of how it changed me.

It was the day of the Winter Holidays Talent Show, which was not the reason for the despair (although, let’s be honest, the principal’s insistence on singing a dirge-like “Go Tell It on the Mountain” while accompanying himself on the guitar would not lift the soul). I had escorted my extremely high-energy class of freshmen to the building’s auditorium, where we would watch their schoolmates perform in front of another school’s abandoned homecoming banner, which no one had thought to take down.

One of my students was one of the most horrible people I’ve ever met—I’ll call him Paulie—and the three-minute walk from our classroom to the auditorium had been more than enough time for Paulie to cause trouble, verbally abusing his classmates and ricocheting off the walls. I had already had to stop one of his classmates from hitting Paulie, even as I wished that someone would hit him, and hard.

As often happened, the show did not start at the scheduled time, so our large group of students grew more and more agitated, stewing in the deepening agony of being forced to sit in uncomfortable chairs, staring at a sign reading GET DOWN WITH COLLEGE PREP HIGH SCHOOL, waiting for this stupid event the grown-ups had forced them to attend to be over so that they could be done with school and be out into their real lives already.

Paulie was seated near a young man called Marvin, a thin, gangly kid in a striped polo buttoned to the neck, who I always described as “delicate” to myself. He was a frequent target of Paulie’s harassment, and as the waiting dragged on, Paulie started teasing Marvin, drawing the snickers of the bored students around them. Marvin told him to stop, so Paulie imitated Marvin, and Marvin wasn’t able to just go still, leaving Paulie with no material to work with, instead getting more and more agitated himself.

I was equally annoyed by both of them, the kind of mindset that’s wildly unfair yet not all that uncommon in exhausted teachers. I told Paulie to stop. He didn’t. Marvin looked increasingly frantic. I tried to separate them, but Paulie wouldn’t move, recognizing that he’d lose the source of the attention he was getting from other students. So I sat down between them, trying to help Marvin and keep this from turning into a Thing which an administrator could yell at me about later. After a moment between them, Paulie crinkled his nose. “You smell,” he said to me. “You smell bad.”

The only real helpful quality I had as a teacher of those very, very difficult students was that I really, really cared about them, and yet I had abandoned them.

And get this: Marvin laughed. At me.

He must have been so relieved to have Paulie’s fuselage of torment turned on someone else, but oh, how that laughter hurt. It felt like a betrayal. Worn down by many long months of trying to reach Paulie and his classmates, I did what I had so often done when pushed to my emotional limit as a still-newish adult: I burst into hot, angry tears.

Everyone has sensitive spots, and one of mine is being told I smell, so my consternation was genuine, but my sobbing ineffective. No one came to help me—I realize now that all of the other teachers were at least as tired and overworked and focused on their own problems as I was and honestly, what the hell was taking so long? It was a school talent show, not the Moulin Rouge—and Marvin and Paulie, now united, giggled together, pointing at me, holding their noses.

So I got up and walked away. And by “away,” I mean, I abandoned the class. I walked out of the auditorium, up the stairs, back into my classroom, went behind my desk, and collapsed onto the floor, where I sobbed, staring at the mouse droppings underneath the radiator. And still, no one came to help me. Through the pipes, I could faintly hear “Go Tell It on the Mountain,” or imagined I could, and it was the perfect soundtrack for my utter self-pity and genuine despair.

I stayed like that on the floor, moving from sobbing—sobbing—into mere weeping, for about 45 minutes, until another teacher (who weirdly kept a desk in my classroom, for reasons too stupid to explain) appeared, threw herself into her desk chair, dropped her head into her hands, and began to wail about something awful that had happened to her at the talent show too. She knew I was there. I knew she was there. But we both just stayed in our own corners, crying.

That was it, the most sunk moment of my teaching life. I could see that she needed help, but I had no help to give. I also needed help, but didn’t expect her to provide it. I could see no way forward in working with those kids. I expected to be fired since I had effectively walked off the job, and it was likely that Paulie had killed Marvin while I was gone.

The only real helpful quality I had as a teacher of those very, very difficult students was that I really, really cared about them, and yet I had abandoned them. I hated them for being mean, I hated myself for being weak, and I hated my colleague for not being a wizened old noble teacher who could pat my head and give me good advice. I hated “Go Tell It on the Mountain.” I had never been more alone in my entire life.

It occurs to me now, that perhaps my colleague, Marvin, and even Paulie felt the exact same way.

Let’s fast forward, shall we? In the short term, no one even noticed that I had left the auditorium, which tells you a lot about that school. I wasn’t fired, and when I called the Teachers’ Union hotline to ask what I should do, the woman who answered said, “Well, I wouldn’t bring it up that you left, to start with.” So when the kids returned to the classroom to grab their stuff, I didn’t say a word except “See you tomorrow!,” and they cheerfully bid me goodbye as they always did—or at least the ones who bothered to talk to me did. No administrator ever disciplined me.

But it also worked out for me in the end. I mean not immediately it didn’t, I hated that job, and I struggled for three more years to get out of it, and my colleague turned out to be super weird, and the principal’s fondness for inappropriately religious material ended up being the best thing about him. But these days, I have a pretty great job, still teaching, and I’m much happier, and my students these days never tell me I smell.

But of course, in that moment, I knew none of the future ahead of me. I’ve never forgotten how utterly abandoned I felt, or how impossible it was to reach out of my own despair and look after someone else. I hope that teachers who read this have not had such terrible days in the classroom, but I bet you still know exactly what it was like, because to be a good teacher is to care very much about people, which is an effective way to get your heart thoroughly broken on the regular.

No student, no teacher, ever had to feel alone like that so long as I could say or write something to prove that they were not.

There’s just a little bit more to that story, by the way. I went home and told my best friend, Andrew, about what had happened. At first, of course, he was all sympathy and concern, but, as often happens with us, we were soon laughing.

“Why did you run away and lie on the floor and stare at the heater?” he asked.

Simon & Schuster Audio · WHY DID I GET A B? audiobook excerpt – Preface

“I don’t know,” I said. “I guess maybe I hoped that a teacher on the floor above or below me would hear me, and send a message through the pipes…”

“Like in a prison movie! You tried to Shawshank it!”

As we laughed, I realized what had changed for me in those moments of despair: I had grown up. Not completely (as if), but I was wiser than I had been at the start of the day, when I was aggrieved and aggravated by Paulie and his classmates, who insisted on behaving badly no matter what I did. The challenges that Paulie and Marvin faced (some self-generated) were much greater than anything I had ever dealt with.

They were going to continue to be cruel to me, I realized, and I was going to take it, because they needed me (or someone, and I was the lucky winner), quite a lot. That was the work I had to do, and I expected, rightly, to fail at it mostly, and very occasionally succeed.

But the loneliness I had felt, and had seen in my crying colleague, well, that was something I could fix right away. I could joke, tease, cajole, and laugh, with my students and my colleagues. My sense of humor is who I am, one of my deepest resources to call upon. No student, no teacher, ever had to feel alone like that so long as I could say or write something to prove that they were not, often in the form of a very sarcastic joke.

Dear readers, I hope that this is a message through the pipes for you: you are not alone in the difficult and beautiful work of teaching, of caring for others, of being alive. There is much to share, and worry over, and laugh about.

Have a seat. Class is in session. 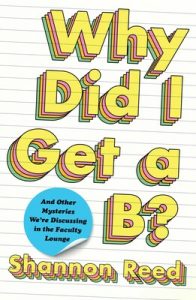 Excerpt adapted from Why Did I Get a B?, published by Atria Books, a division of Simon & Schuster, Inc. Copyright © 2020 by Shannon Reed.

Shannon Reed is a frequent contributor to The New Yorker and McSweeney's Internet Tendency. Her work has also been published in The Washington Post, Guernica, Longreads, and Vela, among others. She teaches at the University of Pittsburgh and is at work on her first novel.
http://www.shannonreed.org/ 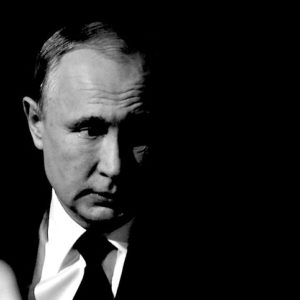