In 1819, John Keats quit his job as an assistant surgeon, abandoned an epic poem he was writing, and focused his poetic energies on shorter works. What followed was one of the most fertile periods in the history of poetry, as in a few months’ time Keats completed six masterpieces, including such celebrated classics as “To Autumn,” “Ode to a Nightingale,” and “Ode on a Grecian Urn.” Now, 200 years later, American scholar Anahid Nersessian has written an exciting new book called Keats’s Odes: A Lover’s Discourse, in which she gathers and revisits the Great Odes, viewing them through a personal prism.

Anahid Nersessian: I think the thing that drew me the most to Keats, besides his sort of marginal status in the world of letters, was just that he’s incredibly lovable. He’s very, very lovable and very endearing, and a lot of Keats scholars have a relationship to Keats that feels much more intimate than the relationships that they might have to other writers, partly for that reason—that you just think, man, I would have loved to have known this person; he seems like such a mensch. Some of it is just the personal charisma that Keats has, that was so strong that it lasts on the page 200 later, is probably what drew me to him more than anything.

Jacke Wilson: Do you think that the appeal of Keats comes from the letters as much as his poetry? He comes across in the letters as so earnest and so endearing, I think. Was that something that drew you to Keats, or are we just talking about the poetry here?

Anahid Nersessian: I encountered the letters before I encountered the poems, so for sure. And I think that most people would tell you that the Keats of the letters is what really enchants them into the world of Keats’s poetry and makes them Keats converts. And it’s true because he is in his letters—of which there are many, given the fact that he died so young, because he was a prolific letter writer—but in the letters he comes across not just as very lovable and very endearing and very sweet and very earnest, but also as sometimes kind of bitchy and mean and insecure and very, very funny and very well-meaning. Sometimes he has these crises of self-confidence and other times he’s just absolutely, completely enraptured with the possibility that he’s as good a writer as any that’s existed in the English language. So in that sense, he’s like all of us. And the letters record him in the fullness of his personality. You see him being vulnerable, you see him being arrogant, you see him being depressed and melancholy. You see everything. When you have that full a picture of somebody—and there are very few writers who we have that full and intimate a picture of—it’s easy to become really smitten with them and to feel as though they are your friend or your buddy in some way.

Te-Ping Chen: The Lived of Experience of China is More Brave New World Than 1984 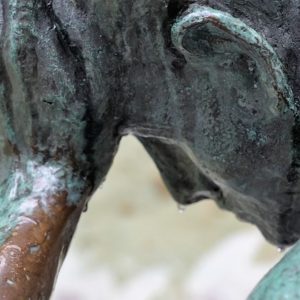 With advances in access to information and technology, knowledge isn’t just increasing. It’s increasing at an increasing...
© LitHub
Back to top