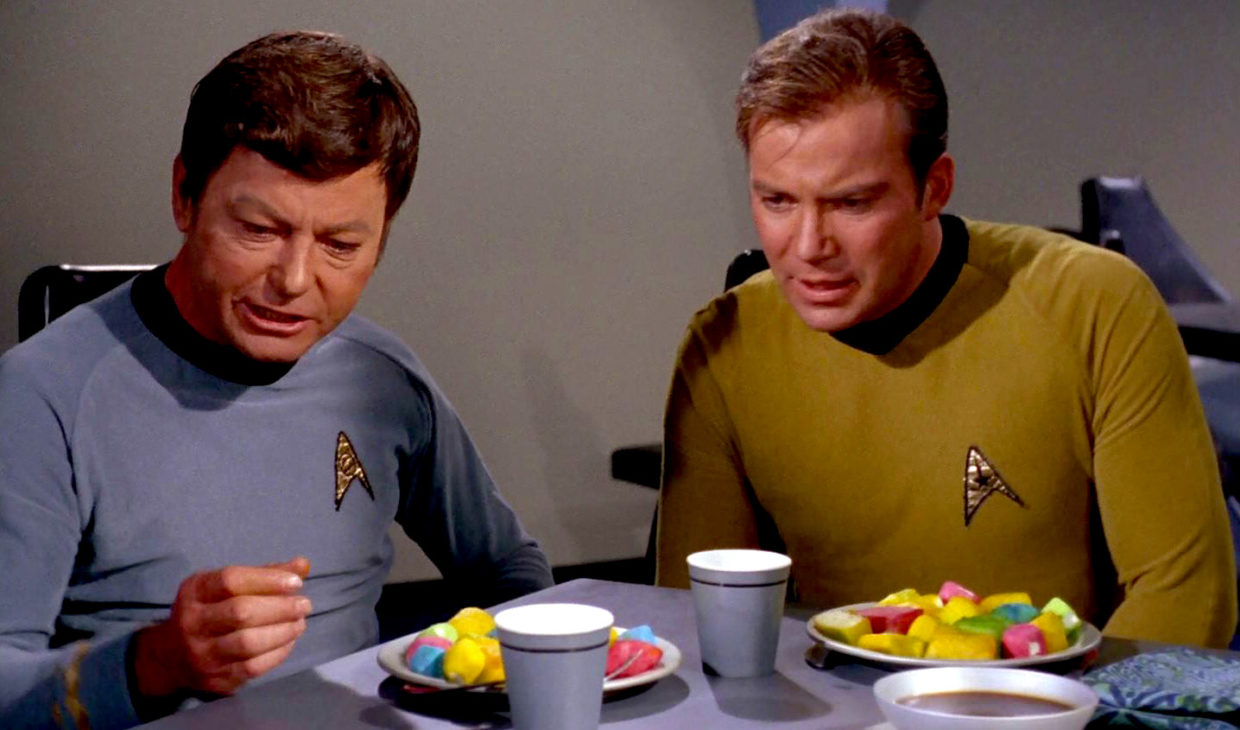 On the Freaky Foods of Fictional Worlds

From Abundance to Scarcity, What Eating in Sci-Fi Says About the Real World

Pick a science fiction character. Doesn’t matter where they’re from. Now, tell me what their favorite food is.

You can’t think of anything, can you?

In most fiction, the characters eat. You might know instantly that Homer Simpson loves donuts, that Winnie the Pooh yearns for honey, that Bugs Bunny eats carrots with abandon, or that the Teenage Mutant Ninja Turtles are all about pizza. Your friend with an MFA might wax poetic about Proust and his famous madeleines, and any Harry Potter fan can tell you all about treacle tarts and chocolate frogs and butterbeer. There’s even a Game of Thrones cookbook.

But in modern sci-fi, no one ever seems to have a good meal.

Lots of sci-fi focuses on rollicking adventurers hurtling through space, with characters who don’t have time to worry about, say, making dinner for each other. It’s easy to overlook the everyday mundanities of what people are putting in their bodies when there’s a plot to focus on.

When you look beyond complicated narratives and fast-moving stories, you begin to notice that just as many characters aren’t eating as don’t have enough to eat. More and more, authors are interrogating problems of climate change, equity, and food security through the table even as their protagonists explore galaxies far, far away.

This wasn’t always the case.

In the doggedly optimistic science fiction of the 1950s and 60s, there was always an overabundance of food, and it was often lavishly described. Despite, or perhaps because of, the fact that most of these tales were written by and for men who spent no time in the kitchen, sci-fi from this period imagines a future where everyone has enough to eat at all times and never has to put work into making or acquiring it. In these food utopias, technologies like Star Trek’s replicators make sure everyone is constantly fed and that they want for nothing. In Forbidden Planet, Robbie the Robot can make anything at any time for anyone. The Jetsons shows Jane as in charge of the “menulator” machine, but all she has to do is push a button, and beef stroganoff appears!

In stories like this—stories written by children of the Great Depression—food is so easily accessed that it seems almost laughable to focus on it. But for a generation of people who grew up unsure of the origin of their next meal, a generation who were then thrust into extraordinary abundance as adults, bread that’s lighter than air and hens that lay soft-boiled eggs seemed simultaneously impossible and enticing.

It’s hardly surprising, then, that in imagining the future, writers use food as a symbol not only of hope and good luck, but of death, environmental warning, and class.

Ray Bradbury’s short story “Here Be Tygers” provides a great example of this, envisioning a planet where you can have everything you want the moment you imagine it. The power of flight? Check. Fish that swim unwittingly into hot springs, boiling alive for your pleasure? Check. Water that is secretly wine? Yep, that too. But as the crew of the spaceship begins drilling into the ground, injuring this seemingly sentient planet, it revolts. The lakes turn to tar pits, a crewmember gets picked off by a mysterious beast, dinosaurs and mammoths appear, and they realize that they’ve overstayed their welcome.

This story was published in 1951, just as the earliest whispers of the environmental movement began, and its theme of nature resisting human intervention has only become more pronounced in speculative fiction in the years since. These ideas have brought us everything from Miyazaki’s Nausicaa (and, you know, Avatar) to Dune and Oryx and Crake.

Recently, though, focusing explicitly on food and a lack thereof seems to have become ubiquitous.

In The Martian, Watney’s entire existence depends on his ability to grow potatoes on a planet inhospitable to that desire. The Broken Earth trilogy constantly deals with food security—when Essun is living in Castrima, another woman’s accidental pregnancy throws off the community’s careful calculations about who can eat what, and it is determined that she will get no extra food until somebody dies. James S. A. Corey’s The Expanse includes a whole civilization embroiled in these questions: the residents of The Belt are always worried about their next meal because growing food is nigh impossible for a people whose very water supply is dependent on whether deliveries from Earth and Mars are made on time. In the admittedly heavy-handed Snowpiercer, the back of the train eats cricket-based protein bars (and occasionally each other) while the front dines on fresh oranges, sushi, and steak.

Snowpiercer’s artificial scarcity in the face of an apocalypse is admittedly bizarre, but it’s not too far off from reality. Food has always been used to control people. Foodie favorites like banh mi sandwiches, Southern fried chicken, Okinawan taco rice, and even pizza were born in part from the uncomfortable culinary exchange that comes of a global history rife with colonialism and subjugation.

It’s hardly surprising, then, that in imagining the future, writers use food as a symbol not only of hope and good luck, but of death, environmental warning, and class.

Science fiction writers are not getting these ideas from thin air—our air is quite literally getting worse. With the increasingly urgent effects of global warming, class stratification, along with its effects on food insecurity, is only becoming more pronounced. While the rich raise their kids on organic baby food, 20 percent of US households were considered food insecure in 2017, and needlessly so, given that a full third of the food produced worldwide is wasted.

Between the anti-climate science stance of the current administration, the reality of climate change, and the way we’re burning through resources, it follows that authors will only continue to imagine bleak visions of Earth’s future. But humans are as ingenious as we are idiotic, and as such, all is not lost, even in fiction.

In Becky Chambers’ Wayfarers series, we’ve finally figured it out. There’s a whole hydroponic ecosystem contained on their little spaceship: the crew grows everything from intergalactic flora to giant insects to snack on, and they even have a chef. Upon her arrival onboard, Rosemary, who’s recently fled a life of extreme luxury, gets question after mildly horrified question from her new crewmates about what beef tastes like, and the fact that she has never eaten insects is considered strange. As she digs into her first (delicious) bug, she reflects on how it signifies that she belongs to, “a separate chapter of human history,” because, “she was a descendant of the wealthy meat eaters who… shipped livestock through space while nations starved back on Earth.”

If science fiction at its best provides a prism through which to examine the present, then we’re being sent a very clear message by authors as far back as Bradbury and as recent as Jemisin. Treating our planet—and each other—with disrespect will be our doom, but if we work hard to take care of both the people and the world around us, we can find ways to keep going in the years to come.

Lizzy Saxe is a food writer, YouTube creator, and generally huge nerd. Her work focuses on the past, present, and future of food and the human condition. You can find more of her work at www.lizzysaxe.com or on her channel, Internet Food Historian.

Toward Changing the Language of Creative Writing Classrooms 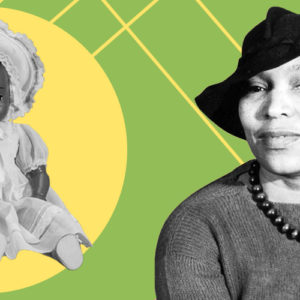 Zora Neale Hurston is one of America's most beloved literary figures, an influential writer, anthropologist, and giant of the Harlem...
© LitHub
Back to top