Coming into this project I’d never loved “Black Peter.” But I’ve come to appreciate its place on Workingman’s Dead as a piece of a whole unified by nature’s immense presence, and its ultimate disregard for humanity. The problems of pronouns—the I, she, you that populate these songs—are human creations that are not products of the natural world but are subject to it.

The natural world’s overwhelming might is the central theme in the work of visionary painter Charles Burchfield. For an artist selected in 1930 to be the subject of the first solo show at the Museum of Modern Art in New York, it is surprising that not more people know about Burchfield. Although he died in 1967, just as the media were instilling the aesthetic notions of “psychedelic,” Burchfield’s watercolors probe natural cycles with the same ecstatic intensity as an LSD trip. The energy of a summer-lively forest, a swampy spring thaw, a formidably moody cloud are all made visible through a quaking, wavering, rotting, blooming world in which the four seasons and times of day somehow all appear at once in a composition. Burchfield animates his scenes with human qualities not in an attempt to humanize the wind, the rain, or the trunk of a tree but to call attention to how our lives are inextricably linked to these natural events.

His dedication was serious; he diligently and obsessively worked over his ideas out of a place of fear about his own sense of self, which was as anxious about death as it was nostalgic for it. What Burchfield and the Dead shared in common was a commitment to their respective artistic visions, being uncompromising and unapologetic about exploring ideas they found vital and necessary. Death was one idea that neither Burchfield nor the Dead shied away from.

A notoriously horrific acid trip that Robert Hunter endured in June 1969, thanks to apple juice dosed with “probably a full gram of crystal LSD … worth perhaps $50,000,” was the lyrical impetus for “Black Peter.” Bassist Phil Lesh remembers tasting the LSD as soon as he sipped the juice. When it came time to head for the stage Lesh told drummer Mickey Hart: “I wish you could be where I am right now—it’s so beautiful; but I couldn’t possibly play music now. I don’t even know what music is.” Nonetheless, the band still went on. Hunter, with nothing to distract him aside from scrambled thoughts, hallucinated blood pouring from Janis Joplin’s mouth and “experienced every assassination he knew of, dying with JFK and with Lincoln, among many other deaths.” On this night, the promise of death made itself known to Hunter through experiences that made him think he was dying over and over again, with the same frequency of sunrises and sunsets.

On the heels of a kind of quick-step funeral procession “Black Peter” opens with the narrator announcing, “All of my friends come to see me last night / I was laying in my bed and dying.” The human element is ever present in this song, but the force and cycles of nature dominate: “The weather down here so fine” and the wind comes “squalling through the door”; “Sun goin’ up / and then the / sun it goin’ down.”

I’ve come to think of one particular Burchfield painting from 1917 that visually represents this song: “Garden of Memories.” This image is not emblematic of Burchfield in that one of the subjects is a person. Very few people appear in Burchfield’s work because the ideas that consumed him had very little to do with other people. But in this painting an old woman sits in a rocking chair, desiccated like a mummified corpse as the natural world around her wilts; her home appears to be melting with double-humped waves of “hypnotic intensity”; the roiling soil beneath her feet is preparing to pull her back into the earth. Drabness permeates the entire scene, even the sun is being absorbed into an eggshell-colored triangle of sky wedged between the canopies of trees cycling through seasonal decay, the same as the woman. Gravity pulls down everything—the two houses, the color from the sunflowers—with the exception of a handful of fledgling flowers standing near where the woman sits, brightly blue and red as if strengthened by her weakness.

Bedridden by a fever that keeps spiking and breaking, Peter knows “One more day / I find myself alive / tomorrow / maybe go / beneath the ground.” The elderly subject of Burchfield’s painting does not appear ill so much as old, fading, as even the healthiest of individuals will. There she rocks in her chair, alive but waiting, like Peter, for the inevitable. Also the same as Peter, there is no discernible anger, just the simplicity of acceptance. There is no artifice in either the painting or the song.

Peter accepts that he is dying, finding solace in his friends coming to see the bedridden patient; all he wants is “a little peace to die / and a friend or two / I love at hand.” The same as in “Dire Wolf,” another song on Workingman’s Dead, the grim reaper will not leave empty handed. But in “Black Peter” the acceptance is the result of a life well lived. Here we have someone who has known the joys of friendship and love. This is not a lament of loneliness and emotional penury but the welcoming of the debt of death being called in on the gift of life. Peter might not have any financial wealth but it is his investment in spiritual wealth that pays dividends here. He becomes an example for death: “Take a look at poor Peter / he’s lyin’ in pain / now let’s go run / and see.” Everyone who flocks to witness the spectacle of death does so knowing that it will happen to them one day, too. “Garden of Memories” does the same thing, calling attention to death and embracing it, rather than turning away from it. This is the essence of Burchfield, calling attention to the inescapable beauty of the dependency between life and death, growth and decay, beginnings and endings. Like the Dead, his work can simultaneously hold these opposites, reminding viewers of how life is a whole completed by contradictions.

Hunter’s trip brought him face to face with death; the same high-octane apple juice created for Lesh a peak psychedelic experience. For the Dead, LSD revealed glimpses of the unknowable, hints of the unimagined and unthought, bestowing to these wily witnesses comfort in the assurance of mystery, accepting that the divine might never be more than a confluence of bodily sensations, a mind speaking to itself. After enough time running through these mystical mazes the band returned to terra firma better equipped to consider the connection between the very surface nature of the temporal realm and everything else behind the scenes, out of time. “Black Peter” tethers these two realms. All of these psychic connections and flashes still spotting their visions, the Dead recorded the cycle of life on Workingman’s Dead, sounding its ephemeral beauty and its inability to be escaped or forgotten. Where the music stays close to the ground, the ideas contained within the lyrics rocket into the stratosphere.

Both the songs on this album and Burchfield’s paintings thrive off a timeless communion with nature. There is a totality in these creations that goes beyond subject matter. Residing within Burchfield’s paintings and all the songs on Workingman’s Dead are American ideas, a tension of ideals, of potential and unrealized potential, nature’s limitlessness, and how constricting such expansiveness can become.

What is the Writer's Place in a Violent World? 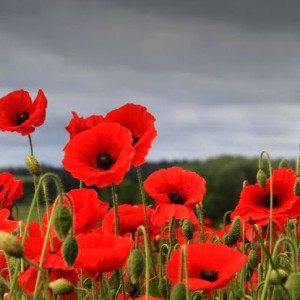 What is the Writer's Place in a Violent World?

The following essay appears in the current issue of The Massachusetts Review. There is a saying in Ethiopia: when...
© LitHub
Back to top