VIA The Massachusetts Review

What is the Writer’s Place in a Violent World?

Before we describe, we must first be willing to look

The following essay appears in the current issue of The Massachusetts Review.

There is a saying in Ethiopia: when the one who will be killed is in the presence of the killer, there is freedom. In that moment, there is nothing left to lose. It is possible, even, to do unheard-of things.

I’m in London on a cold November morning and the last of the 900,000 ceramic red poppies will be placed around the Tower of London, one for every soldier from the United Kingdom and the Commonwealth who died during the First World War.

It is a scorching August day and the world has fallen silent as a young man in an orange jumpsuit is paraded across a sandy hill and made to kneel.

It is April and another group of young men, black like me, are marched across both sea and sand and forced onto their knees.

I turn my head. I close my eyes. I shut my ears. Unheard-of things.

Chinua Achebe says that all those men in Nazi Germany who put their talent in the service of racism have been generally and rightfully condemned for their perversions. He seems to imply that in the end, true talent cannot be twisted, a gift cannot be subverted and subsumed by evil. That talent is a virtue, stalwart, loyal as a well-trained soldier.

Arthur Rimbaud gave up the pretense of poetry, Achebe says, when he opted for slavery. But I have been to the city where Rimbaud lived. I have seen some of his belongings. I know that when he put down the pen, he picked up the camera. I have borne witness to his vision of those with skin just like mine.There is beauty in the frame. There is poetry.

“Poetry surely can only be on the side of man’s deliverance and not his enslavement.” This I want to believe.

Like some of you in here, I come to this language of English secondhand. I have fallen between its cracks trying to trudge my way toward comprehension. I have marveled at its flexibility but never so much as in recent years. What I have seen, what we have seen, is language forced into the service of violence. A rhetoric of desperation and devastation molded into the incomprehensible, then vomited out in images and words that we cannot ignore though we have tried.

What I have seen, what we have seen, is language forced into the service of violence.

It is a language that uses trick mirrors, that employs trapdoors through which meaning can slip and hide. It is strong enough to reside in troubling landscapes, malleable enough to be both poetic and cruel. It has the capacity to draw us in and push us back and send us spinning with speechless grief. While those red ceramic poppies want to remind us of the transcendent power of memory and imagination, the ISIS videos want to drive home that we are, in the end, no more than our bodies. That we are all shatterable, interchangeable political symbols knotted around a stoppable heart. Both the installation and the videos demand that we take note and look. In both instances, our gaze is the first step in receiving a prescribed message. Yet to watch the ISIS videos involves a heartrending complicity with the murderers; our gaze would be an instrument in the oppression depicted, a continuation of the vulgar narrative.

But it is a narrative, it is language. It communicates. It is poetry because it is a language of representation. All those men, clad in orange, dragged across sand and sea, have been reduced to brightly colored metaphors. All those poppies, blood red and stuck in dirt around the Tower of London moat, were once full-bodied men strewn across battlefields.

One reminds us cruelly of our fragility, the other tries valiantly to shield us from the ugly stink and rot that also makes up who we are.

I’m speaking of violence that is put on display. At its most aesthetic, it strips back and erases a harsher reality. At its most garish,it is a billboard for all our most human and most primal fears: a symbolic language come to us so fully and frightfully formed that we have not always found the words to confront it. When it comes to war, when it comes to violence, it seems that we have not always been able to keep up. We have not always been able to locate the vocabulary that will take us from shock and stunned silence toward a coherent, visceral speech, one as strong as the force that is charging at us.

I’ve long believed in a concerned writer’s need to look at photographs of violence: the power of our particular gaze has the ability to reshape a narrative and turn victim into human being. Then came the videos. Then came the requests by the families of the victims to remember them as they had been—alive and active—rather than as they were intended. Yet in the aftermath of the shock, in the deliberate decision to look away, where is there to settle a gaze when turning away feels like forgetting? To look is to be a pawn in the propaganda. To turn away is its own kind of acquiescence, one that renders these victims as symbols.

I know what Achebe is saying. I believe in what he says. I believe that art carries the potential for vast and dramatic change. But it also carries discomfort and it is by its nature both a tool and a weapon, both a salve and poison. It is not only the righteous woman who holds a gift. It is not only the truth-teller who can be heard.

If language can withstand and support the heaviest, most brutal of activities then this is also a testament to its inherent strength, one that can allow us transcendence and peace.

But the stakes are high, and though they may be no higher than they have been in other decades and centuries, you and I are here now, in this moment in history. And somewhere in this swirl of unpredictability and ever-shifting alliances is the writer’s place. For years, I have been searching for that point, that axis on which good seems to pivot too easily toward bad. I want to know where the ground begins to shift and how language both erodes and glues it back together. And what there is to be done about it.

I am talking about our responsibility, our duty, in the face of those unspeakable and unheard-of things. How do we begin to construct a vocabulary if all we can do is stand in numb and silent grief? What is there to really see of those who once stood and then were forced to kneel, if all we do is look away?

How do we begin to construct a vocabulary if all we can do is stand in numb and silent grief?

I am asking who will stand in the bloody fields and make the world understand that a poppy can never re-create a full-bodied man? No matter how lovely.

I am not sure that language can grow to its full potential if we choose to leave certain words unsaid. If some things are deemed too hideous to understand. If we must distance ourselves from all that does not hold sway to our own beliefs.

And this is where I am today, wondering about the writer’s role when there seems there is nothing we can say to change anything. What I have begun to think: that before the word comes the image, that before we describe, we must first be willing to look. We must stare, then verbalize, then reclaim. We learn to comprehend what is in front of us by writing, by re-creating in such a way that we urge others not to turn aside.

There are those who came before us, who have looked and written and forced our gaze toward greater empathy and our language toward greater capacity: here are just a very few: Chinua Achebe, James Baldwin, Be’alu Girma, Ousman Sembene, Assia Djebar.

But they would be no more than mere voices, unintelligible words carried through empty space, if we, all of us, did not take part in their protest against silence, and read. 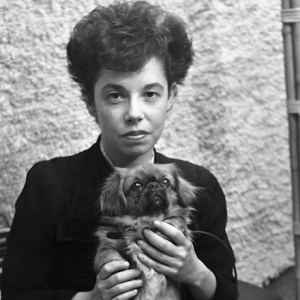 Judy Blume changed my life: Lily King on the book that got her through her parents’ divorce. | Literary Hub On...
© LitHub
Back to top