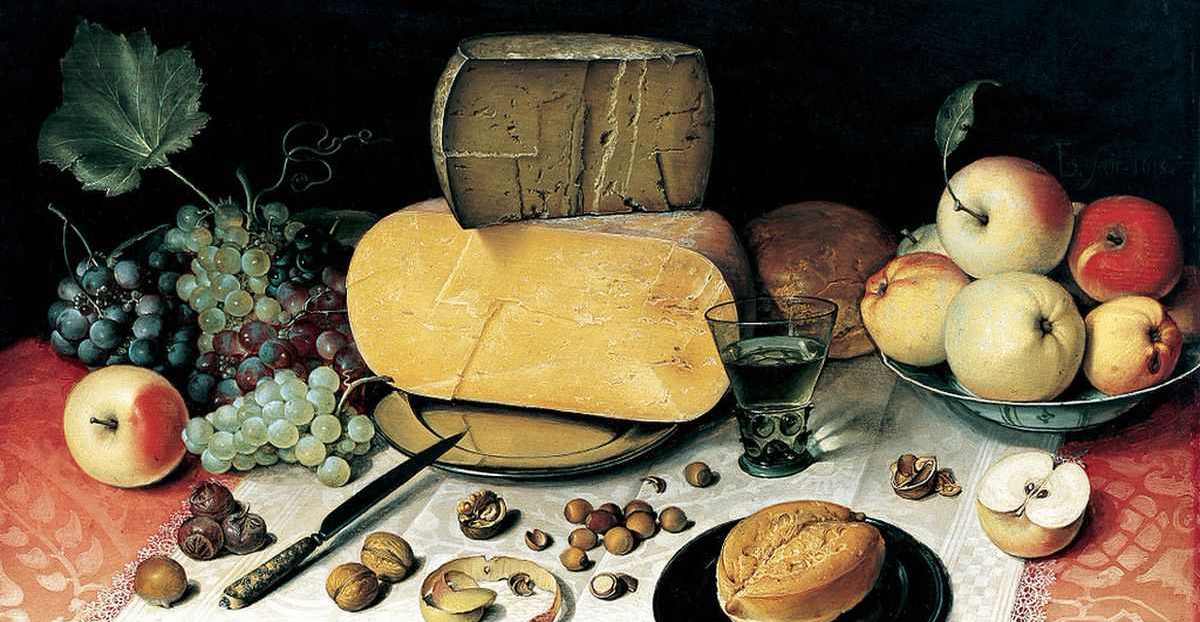 Now that I’m stuck at home thanks to coronavirus, food has become a little too important to me. Eating is a reliable pleasure at a time when so many other enjoyments—travel, concerts, seeing friends—are restricted or cut off. And food is comforting. While the country is ripped apart by corrupt politicians and wildfires surround my California home, I can still stuff fresh pasta with ricotta and serve it with arugula pesto and a nice parmesan. Thus, much of my time is spent thinking about what to eat. An entire day can revolve around baking a pastry. It’s possible I’ve put too much thought into reducing the ice crystals in my homemade gelato. And yes, after months of this, my pants are a little tighter, but come on—am I not supposed to eat the plum strudel that I made, for some reason, which pairs so nicely with the basil-infused whipped cream, which I also made?

It’s no coincidence that I’ve been reading Elizabeth Robins Pennell’s The Diary of a Greedy Woman. Generations before MFK Fisher or Julia Child, Pennell wrote essays enthusing the virtues of food for the London newspaper The Pall Mall Gazette. She ignored recipes in favor of first-person accounts of “the Beauty, the Poetry, that exists in the perfect dish.” In 1896, the column was collected into The Feasts of Autolycus: The Diary of a Greedy Woman, and later reprinted as The Delights of Delicate Eating and A Guide for the Greedy. Personally, I like The Diary of a Greedy Woman best, especially since Pennell begins the book by embracing gluttony, which she declares should be “honored among the cardinal virtues.” Using a tone of elevated aestheticism, she asserts that eating is among the highest arts and essential to good living. This, she writes, is especially important for women, who often restrict food to fit a certain idea of “attractive,” making pleasure a “deep mystery into which only men could be initiated.”

In the 1890s, beauty standards dictated women be thin and fragile and social conventions determined that expressing appetite was unladylike. Today, the language of diet culture may be more coded, focusing on “being healthy” and avoiding “toxic” choices, but the restrictive relationship between women and food still remains.

Meanwhile, But Pennell was body-positive long before it was a thing. She assures the reader that eating makes women “more beautiful”—healthier, happier, and stronger. ” Her eyes sparkle, her lips are glossy, her talk cheerful, all her movements graceful.” She believed that joyful eating is part of relishing life——a crucial skill, she writes, for women who want to thrive in the gastronomical realm. “The kitchen still waits its Sappho,” she explains.

I dug into the book, happily planning what to make and inviting a friend over for a small, socially distanced dinner party. Then my enjoyment screeched to a halt.

The Diary of a Greedy Woman is indeed gluttonous. It takes the reader through a day that could include two enormous breakfasts and a seven-course dinner with alcohol, coffee, and tobacco at every turn. But this tongue-in-cheek ode to indulgence is full of delicious food descriptions. The perfect radish is “tender, sweet, yet peppery, with all the piquancy of a young girl.” A tomato salad, “scarlet and stirring” with “just a suspicion of shallot,” should be eaten beside a vase of red tulips. And a beef sandwich will send you straight to the Alps: “Again, on the short, fragrant grass you sit. … You take from the faithful knapsack … your feast of big, honest, no-nonsense-about them sandwiches [that] you devour with the appetite of a schoolboy.” (How I would like to be transported to the Alps through a sandwich.)

Rather than recipes, The Diary of a Greedy Women offers menus. Take Pennell’s spring breakfast, inspired by “golden daffodils in their tall glass:” The first course is radishes, rolls, and butter, then a “frothy” omelet where “enclosed in its melting gold, at its very heart … lie the kidneys elegantly minced.” After that, a yellow rice pilaf with a “mound of chicken livers, brown and delicious,” and a bowl of peas. This is followed with cheese, crackers, white wine, coffee, Benedictine liqueur, and cigarettes. This chapter also has a menu modeled after tulips, another common spring flower.

At times, The Diary of A Greedy Woman can feel surprisingly contemporary. Much of the food is still around, from Burgundy wine to Port Salut cheese to Bath Oliver biscuits. And while Pennell is no vegetarian, she includes lots of fresh fruits and vegetables, devoting entire chapters to salads, mushrooms, onions, tomatoes, oranges, and strawberries.

I don’t experience alienation reading Pennell like I do with other Victorian cookbooks, such as What Shall We Have For Dinner? by Catherine Dickens, Charles Dickens’ wife, which lists puzzling dishes like “Stone Cream,” “Scotch Minced Collop,” and “Cabinet Pudding.” I know what Pennell is talking about, and she often makes me laugh. While describing the perfect meal, she interrupts herself to scold any reader who would consider including roast beef and horseradish. “There is a place for all things, and the place for roast beef is not on the ecstatic menu.”

Born in Philadelphia in 1855, Pennell started her career by writing the first full-length biography on Mary Wollstonecraft, author of A Vindication of the Rights of Woman. That same year, 1884, she married artist Joseph Pennell and went to England on a travel-writing assignment. There, she pioneered another area for women: cycling. Along with her husband, she bicycled around much of Europe—sometimes covering 100 miles a day—and wrote travel books about her experiences. Between these excursions, the couple hosted a literary salon frequented by George Bernard Shaw, Henry James, and Oscar Wilde. Pennell also wrote notable art criticism and a biography on James McNeil Whistler.

Which is all to say that Pennell’s food writing was a side project. In fact, when she started the column, she didn’t know how to cook. She admits as much in My Cookery Books, writing, “I had undertaken, in an ambitious moment, to write a weekly column … when my only qualifications were the healthy appetite and the honest love of a good dinner usually considered ‘unbecoming to the sex.’” Friends started giving Pennell cookbooks and she amassed an enormous collection. When she died, 433 of her cookbooks were donated to the Library of Congress. Writing the column when she couldn’t cook may account for the reference to Autolycus, a trickster from Greek mythology. It may also explain why Pennell never gives full recipes, although her official explanation is that a cook’s artistic abilities are “born within him, not borrowed from dry statistics and formal tables.”

I decided to try one of Pennell’s menus, albeit a pared-down, modern version. As wildfires ravished my state, I dug into the book, happily planning what to make and inviting a friend over for a small, socially distanced dinner party. Then my enjoyment screeched to a halt.

My disappointment was in keeping with 2020, a year where even joyful and soothing things can turn suddenly dark.

In a section about fried chicken, Pennell uses racist language, describing (among other phrases) a “mammie” with a “gorgeous bandana turban” and her children, “piccaninnies,” bringing in “relays of hot muffins.” It was shocking and disgusting, and cast everything else I had read in a new light. Pennell may have been body-positive and feminist, but only for certain women: the white English ladies reading her column. Her idea of food was equally limited, focusing on European and American dishes only. I had wanted to view Pennell as a hero, but like many early feminists, she excluded everyone who wasn’t like her—a Victorian living in a colonial system so pernicious, it determined the course of food history for a huge swath of the global population.

After that, I soured on The Diary of a Greedy Woman. If the book was a menu, it had hit a rotten note. My disappointment was in keeping with 2020, a year where even joyful and soothing things can turn suddenly dark. However, since I’d already planned to cook her menu for my husband and a friend, I decided to continue with our plans.

The dinner was delightful, progressing from one course to the next—first, olive tapenade with toasted bread and butter, then filet mingon, cauliflower, and a tomato salad with a “suspicion” of shallot, finally a cheese plate, fruit, and dessert wine. For the first time, I understood the appeal of eating cheese at the end of a meal instead of dessert. Sometimes the sweetness is too much, or, as Pennell put it, “After so tender a poem, who could rejoice in the prose of pudding?”

But the meal was a complicated kind of pleasure, one that made me aware of how the past still lives with us today, down to the food we eat and the dishes we choose to elevate. Even the spices I sprinkled as I cooked seemed heavy with the long, painful history that brought them to my kitchen, so accessible and easy to use. Outside, the civilization I live in seemed to be crumbling, or maybe turning into something else. In the chaos, I had welcomed the bracing contentment the food gave us, but I also felt uncomfortable with my decadence at a time when people are sick, jobless, or losing their homes to natural disasters. There seemed to be no way to reconcile personal enjoyment with the wider problems bearing down on us, and maybe that feeling is the price of indulgence during this time of uncertainty. In the end, it was a price I was willing to pay—along with the usual sluggishness that overeating can bring. As Pennell wrote: “What if work you cannot, after thus giving the reigns to fancy and to appetite? At least you will have had your hour of happiness.” 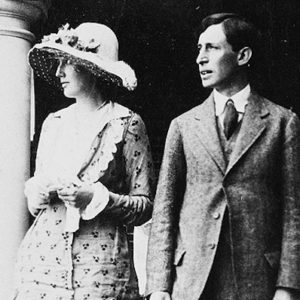 There are so many takes on the Virginia-Leonard Woolf story that they could consume “Modern Love” for a year. Leonard...
© LitHub
Back to top