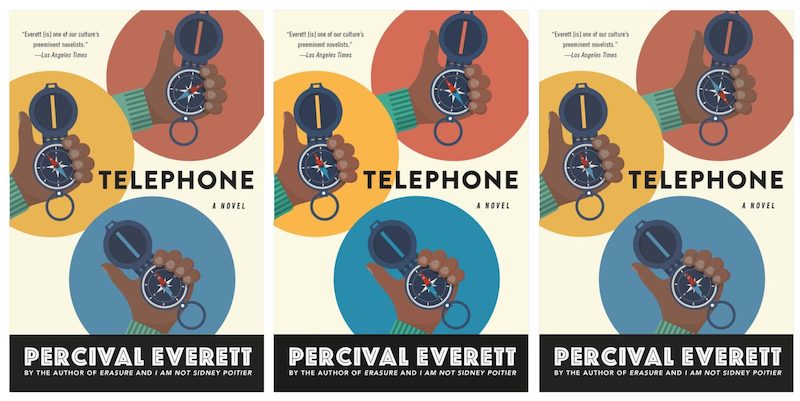 David Lerner Schwartz on the Tripartite Puzzle That is Telephone

Percival Everett’s Telephone is one novel with three different versions, each with a slightly different plot. To discover which version you have, look at the direction of the compass in the red circle on the cover. Or, inside, you could find the number below the ISBN, which categorizes the books A to C. Or, you could peep the dedication, made out to either Miles and Henry, Henry and Miles, or just: my sons. But that would require another copy for juxtaposition and a preternatural sense toward detail. And I’m not sure it matters. Otherwise: Telephone is just like any other book.

Telephone follows geologist/paleobiologist cave expert Zach Wells as his daughter’s health deteriorates. In a waning marriage, he orders a jacket from eBay and finds a note asking for help hidden in the pocket. The book’s title comes from the childhood game of disintegrating information, where a whispered phrase is repeated around a circle until its final form is compared to its initial. This phenomenon manifests in the plot in the impossibility of understanding the cognitive decline of a daughter, the rescue of kidnapped women coordinated through notes sewn into clothing, the sense-making of dreams, the analysis of unsorted academic data, and the words between a husband and wife who can no longer communicate. Life is telephone!

Everett and his team at Graywolf Press had originally kept the novel’s variations a secret. “But with the strangeness with the Covid-19 isolation,” he told the New York Times, “it was a decision in the house to do the reveal earlier than later.” It was news to me that a book could be revealed in a way other than being read. And at what point is a book no longer the same one? We’ve heard of movies with modified denouements, stories republished in new shapes, authors revising their editions years later. Then of course there are our uncles’ go-to tales, which might shift depending on the audience or the venue.

Previously for Literary Hub, I wrote about literary works that enable readers to read out of order. It’s a Sisyphean feature: while the reader has a choice of which subsequent page to select, the author has also stacked the deck because the reader can only choose among the available options. This overall technique becomes an additional story to the one of characters and plot, a sort of two-for-one deal, should the reader be aware of the author’s attempts in the first place. Telephone is not dissimilar, though it in no plain language comments directly on its capacity for difference. Perhaps with Telephone, something like choice gives way to something more like fate.

Everett avoids commenting on this effect by instead shaping the book such that the reader is primed for not knowing. Interstitials break up the narrative between paragraphs, and, depending on the scene, are: Latin aphorisms, quips, or species names; German phrases; genomic information related to the daughter’s condition; chess notation; pieces in the Louvre; objects carried in a pack; and a refrain of “It was hotter in New Mexico.” Often, these interstitials portend events later in the book, and some sections repeat, the result of both a ghostly memory of an idea just out of reach causing you to wonder what else you have always been missing. Take page 180, for example, where the interstitial reads, “Scio nomen meum,” preceding a scene where the daughter refers to her father by the name of her invisible friend from childhood. The Latin means: I know my name.

Now if you don’t speak Latin or German or understand genetics or play chess, the relevance of this feature is in some ways lost. But that is also the point. You either fight telephone by researching every wayward clue, or you put up with not fully understanding. The consequence in each scenario is the same—an undoing of certitude—reinforced by the greater trick of legerdemain just out of view: which book exactly are you reading?

Chapter names are another potpourri of French, childhood games, chess moves, and references. In one version, some chapter titles are replaced by the names of books written by Thomas Hobbes. But many chapters remain the same across. The chapter titled “Coda” comes well before the end. One chapter title is a line from Theodore Roethke. Another is a nursery rhyme. Another a Ralph Waldo Emerson quote. In addition to being suggestive of the multiplicity of the world through absence, Telephone is also compiled of the multiplicity of the world, the recycled language we keep trying to understand to suggest language’s own insufficiency. How many people have spoken into the void? And how many are still uncertain?

Graywolf sent me each of the three versions digitally, which I placed into a PDF comparison tool. In some cases, the changes made little difference. Dialogue tags were removed to suggest reported speech, or an action moved into the conditional. Phatic expressions morphed from “I thought I was going to freeze to death, it was so cold” to “I thought I was going to freeze to death, I was so cold,” (38). Of course, both work. Same when Meg tells her daughter, “We’ll be right here, baby” in one version and “We’ll be right there, baby” in another (66). “Nothing appeared different” becomes “No one appeared different” (133). Occasionally these discrepancies came off as copy-editing issues—cliché has an accent in two versions and loses it in the third. An interrobang becomes a question mark. A description of acceleration in one version misses the additional “per second” (48).

But Everett also plays with error. I-5 is referenced as a highway moving through San Antonio in one version and is corrected to I-25 in the other two. But that’s what happens in a game of telephone—a minor detail (d)evolves. In this case, it’s the highway on which Zach needs to escape with a band of women he’s trying to free. And it’s San Antonio, New Mexico, not San Antonio, Texas, the latter of which is cleaved by I-35. The weight of one number! I-5 instead moves through the protagonist’s home of Los Angeles as well as a town called Everett in Washington. Compare this with lesser variations: Eastern European instead of Hungarian (49), a day instead of the rest of the morning (173). On one hand, our highway shifts a thousand miles with a single digit; on the other, we easily understand the kind of road by which he’s escaping. The detail both matters and it doesn’t. Is sufficient and is wrong. Telephone champions therefore the power of almost and the byproduct of its difference. Each is nearly the same, but never quite.

The almosts add up to tip whole moments. In only one version does an altercation arise in a bar, do two kisses of an affair occur instead of one, does Zach get aroused by spying a student’s romp in the woods. One version adds in lyrics to a Ry Cooder song which become descriptive text in another scene in another version: “The doctor said it’ll kill me, but he didn’t say when,” (193). Let alone a book, at what point does anything become anything else?

The biggest changes are what happens on the family’s vacation to Paris and how the novel ends. Books of course contain multitudes in that they contain characters who, like us, are contradictory, complex, and human in worlds so close to (or far from) our own. But here, depending on the version you’ve received, you’re getting a slightly different Zach, a slightly different story. In one version he’s perhaps more reticent, another more daydreaming, another more at odds, but these differences seem overall negligible. Across the versions, they average out to the same man, the same-ish experience. But to be wise to Telephone’s instantiations is to believe that perhaps somewhere else things might work out differently.

A friend of mine took a course where the class read Ali Smith’s How to Be Both, a book with two versions, one starting with George’s perspective, and the other with Francesco del Cossa’s. The remaining sections interchange accordingly. After reading the first chapter, the class was immediately struck with a conundrum: they were reading the same book, but only half understood each other.

If I hadn’t known about Telephone’s triplicate nature, I’d have enjoyed the book for its story, its writing. Based on the interstitials and the structure and the plot, I’d have a sense of its telephonic nature, but I wouldn’t understand fully, though I’d also be unaware to the depth of such fullness. Even discussing with a friend virtually, we might review in such broad strokes we’d bridge the gap between versions we didn’t know we had.

In fact, the invisibility of Telephone’s conceit is a secret akin to craft, a deftness not entirely explicable and therefore refreshing in its inability to be pared down to modern methods of conversation. By engaging insufficiency, the book also suggests the insufficient forms of our comprehension today. And regarding Graywolf’s announcement, there’s no harm in knowing a spell is being cast; audiences pay for that all the time. I mean, everyone knows the outcome of most weddings before they begin. And who doesn’t like a good illusionist? But we should learn the alternative—magic we’re unaware of—is the same as real life.

Perhaps all this inquiry is itself a ruse. In his interview with Paris Review three years before Telephone, Everett says, “In order to function, nonsense has to comply very rigidly to the rules of grammar and syntax. That’s why we think it should mean something, because it seems like it should mean something even though it doesn’t mean anything. What I want to do is write something that seems like it means something and doesn’t. I want to write a novel that even I don’t understand.”

Telephone is a composite of both of these, that liminal space overlapped by rule and nonsense, meaning and meaninglessness, right and wrong. This may be the result of most extratextual effects—an added bonus, an additional viewpoint, one worthy enough to remain true all while being unknown. If you’re unaware of Telephone’s tricks, it’s an engaging read. Else, it also incites wonder about what other changes are possible out there in the world. Why these variations? Why these three Zachs? And which would you be? What would be the Telephone of your life? When you have your answer, shout it as loud as you can so that it echoes, warbles, and so by the time it’s in my ears it’s all my own.

David Lerner Schwartz holds an MFA from the Bennington Writing Seminars where he was a recipient of the MFA Alumni Writer’s Grant. His work has been published in Witness, Literary Hub, SmokeLong Quarterly, Quartz, New York magazine, and more. His play, produced after winning Red Bull Theater's Short New Play Festival, is forthcoming in a print anthology published by Stage Rights. He served as the 38th writer in residence at St. Albans in Washington, DC and works as the fiction editor of Four Way Review. David teaches at the University of Cincinnati, where he is a recipient of a graduate enhancement scholarship and a PhD candidate.
http://www.davidlernerschwartz.com 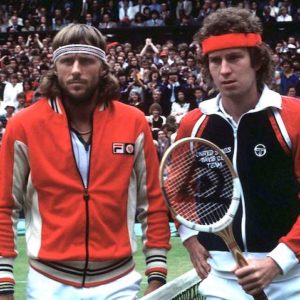 I have always had a thing for what David Foster Wallace called “the great male narcissists,” such as Norman Mailer and Saul...
© LitHub
Back to top