Howard Norman Talks to His Friend of Many Years

Every time I look at Ed Koren’s recent graphite and pen drawings, I experience a startling sense of elegiac anticipation, toward the human species. Today, December l3, 2021, is Koren’s 86th birthday; since l962, he has published over well over a thousand cartoons in The New Yorker as well as many covers, and remains as fully prodigious an artist as ever.

“There’s not an emeritus bone in my body,” he said during one of our near-daily “phone schmoozes” from the house he shares with his wife Curtis in the village of Brookfield, Vermont. “I’m a night owl. I just keep scratching away with my pencil into the wee hours.” So often I have heard that scratching in the background on the other end of the telephone line.

I once asked Ed if he had a work ethic. “I have a fondness,” he said, “for something Chuck Close said: ‘Amateurs wait for inspiration, while the rest of us just get up and go to work.’” In talking about this further, it became clear that for Koren, unless there is inexhaustible work at one’s desk, unless the artist experiences an endless resistance to perfection, the artist’s imagination has no base from which to rise. “I want to draw till I keel over.” 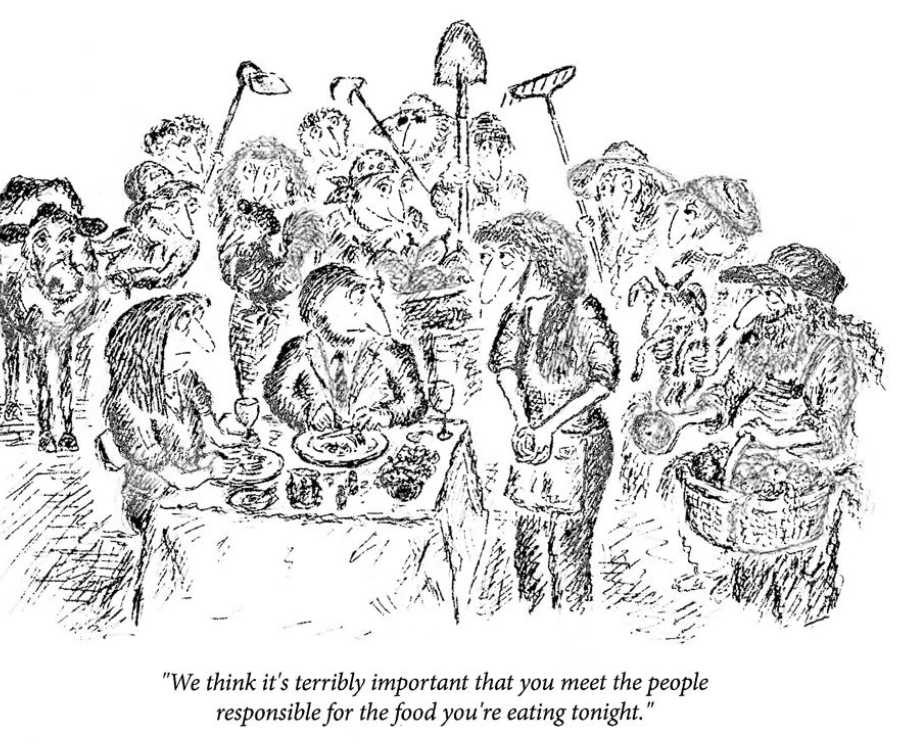 So, yes, if you factor in juvenilia, there are seven decades of cartoons and illustrations for children’s books and hundreds of posters for every manner of book launch or music concert; along with his work on the Brookfield Volunteer Fire Department, Koren’s art continues to be an exceedingly generous form of public service; add to all of that innumerable compositions he refers to as “private experiments,” which have had gallery exhibits world-wide.

“You might say that while the great Daumier is a perpetual influence,” he said, “my visual temperament is my own.” Koren’s drawing life deserves a biography and a biographer would need to include the fact that for many of us in the wide orbit of his Vermont friends, Koren has become a kind of family historian. In my family’s l840s farmhouse, for instance, an upstairs guest room is called The Koren Room.

If 500 years from now an archeologist attempts to decipher how we lived, said archeologist would discover, along with l9th-century wallpaper, framed notices of family life as drawn by Edward Koren: our wedding announcement, the birth announcement of our daughter, various birthdays. And in these celebratory drawings, everyone in my family takes on the physical characteristics, especially their electromagnetically coiffed hair, of the immediately recognizable human types who populate Koren’s cartoons. In the normal course of rural life, these people often commune with Koren’s signature menagerie of outsized frizzy creatures who, in all their Mesozoic variety, tend to be soulful aphorists. 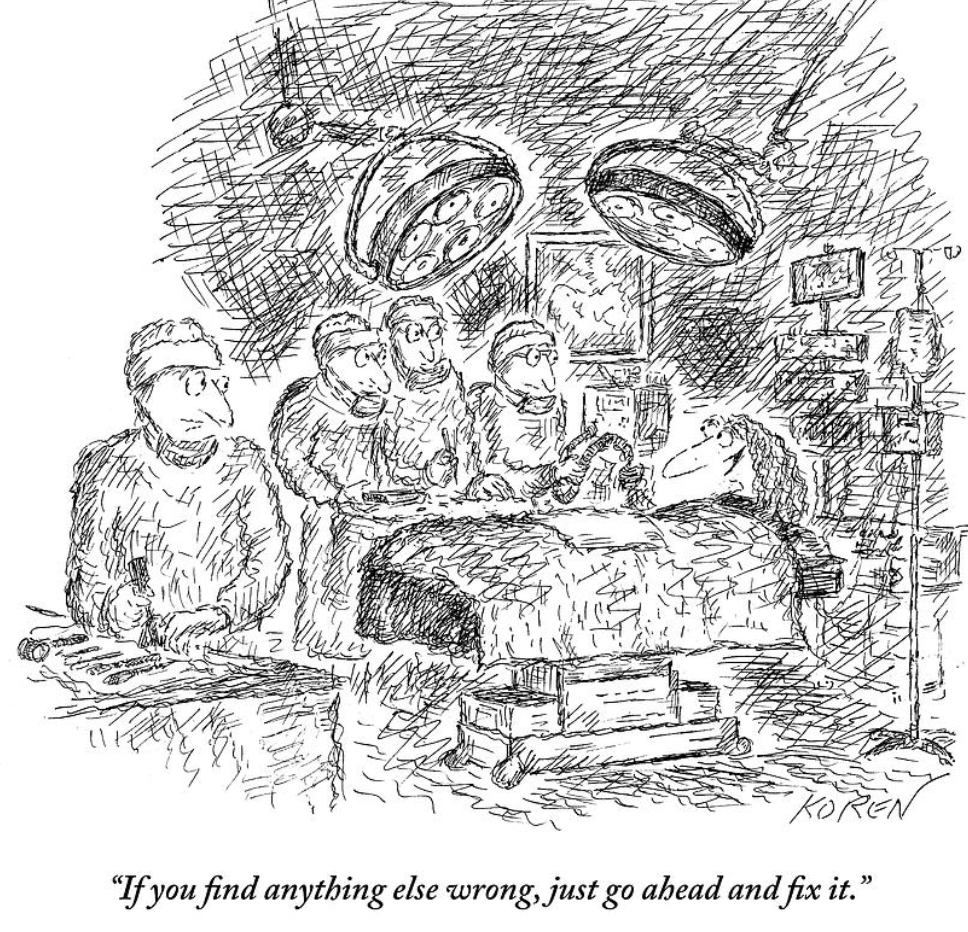 Speaking of elegiac anticipation, I decided that I wanted to extend my association with Koren’s art into the after-life, should there be one. So this past summer I spoke with an acquaintance who lives in a neighboring hamlet. For the purposes of this article, he prefers to be called Everett. Everett is 91 years old. For decades he has been employed part-time in chiseling original scenes of village life on granite gravestones. Also, he has developed a gift for being able to chisel, in an array of cursive fonts, Old Testament quotes, stanzas or complete poems (“I’ve done twenty-six Emily Dickinson poems—I mark out her hyphens with a carpenter’s level”) music hall ditties, Zen koans, lyrics by Leonard Cohen, and many other literary forms.

Anyway, I asked Everett if he would consider copying out in granite one of Koren’s new drawings on my future gravestone in the Doty Cemetery, a few miles from my farmhouse. Drinking coffee at his kitchen table, Everett studied the drawing. “Interesting challenge,” he said. “If your friend Ed gives me the official nod, I’ll sign on.” We shook hands.

A week later over dinner at the 3 Penny Taproom in Montpelier, I told Ed I’d paid the full commission in advance. Sipping a favorite martini, he said, “Well, how else could you personally pay for art on your gravestone, except in advance?” We schmoozed for three hours. 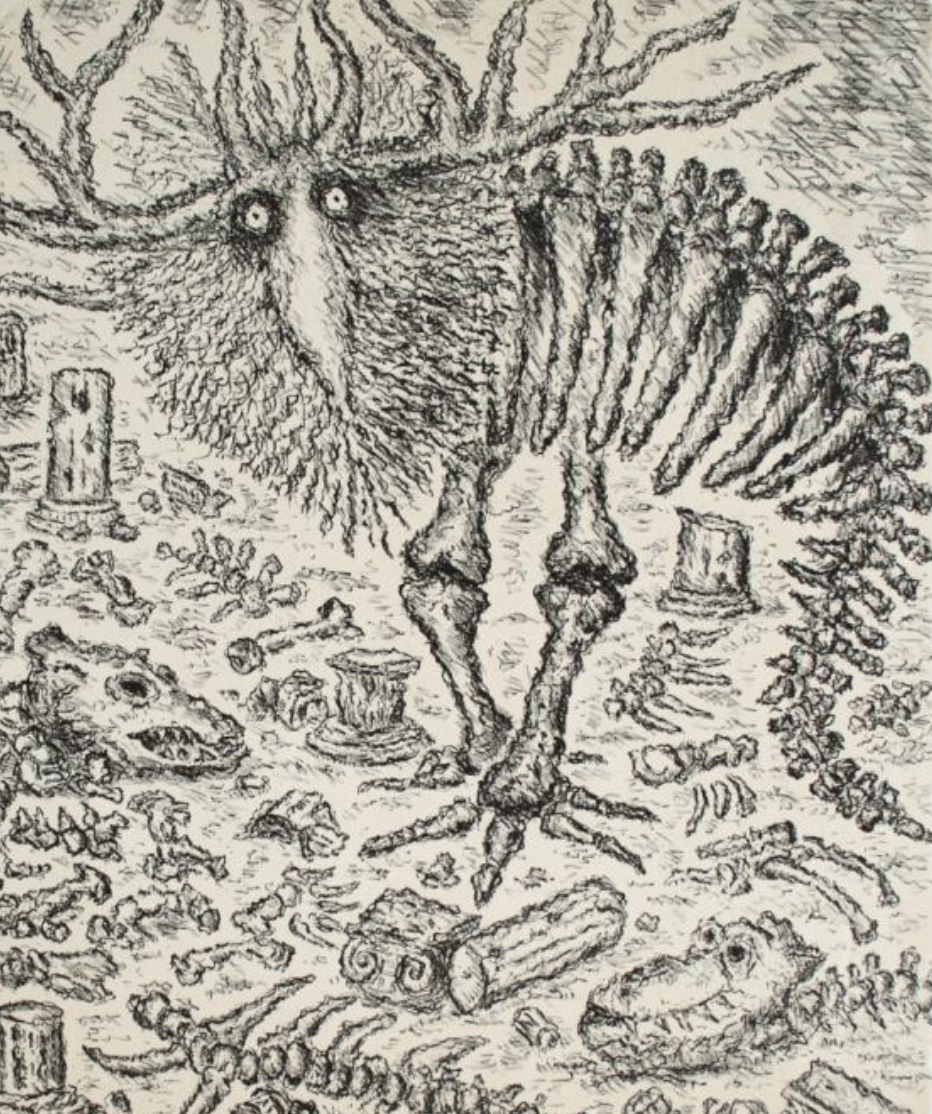 It was a couple of years earlier, in this same pub, that Ed first showed me a few of what I came to refer to as his “spectral portraiture.” I suppose what I mean is, that in so many of these drawings, the figures have haunted expressions; their eyes especially so. Yet if anyone could compose such an estimable comedie morbide on paper, it is the Koren of these drawings. “I don’t think I ever would have started these until I got to be the age I am,” Koren said, “and the fact of losing so many old and dear friends, climate change—and of course Covid. It’s sort of the perfect storm of realities.”

Future scholars who study Koren’s vast archive in the Billy Ireland Cartoon Library and Museum at the Ohio State University will discover that, in an unprecedented way, each of Koren’s 2019-2021 drawings (to be exhibited as “Down To the Bone” at the Peabody Essex Museum, March 12-September 5, 2022) places on high exhibit a penetrating melancholy, and in aggregate they make for a deeply poignant and strangely mesmerizing project unlike anything Koren has ever done. 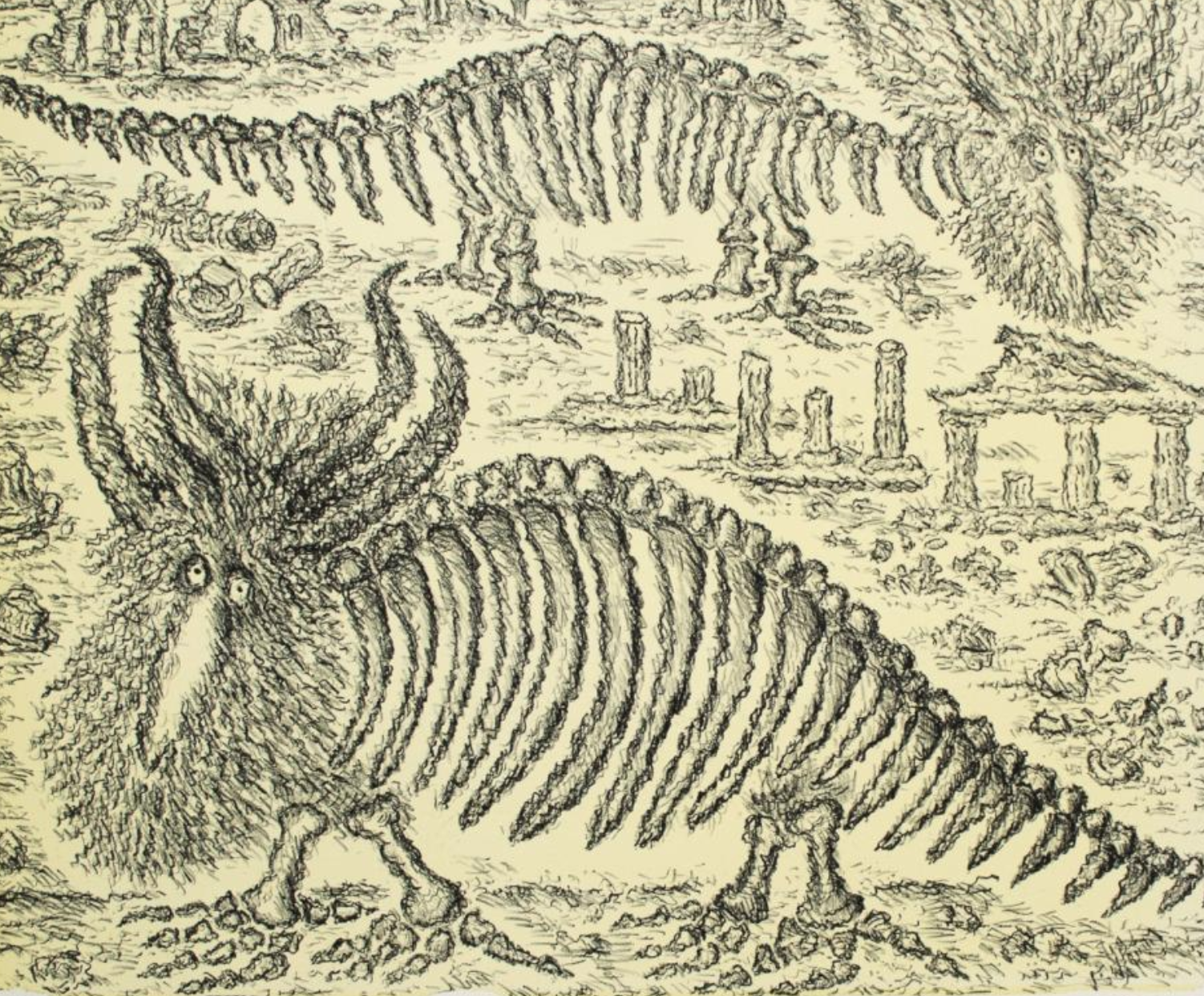 A number of the anthropomorphic figures in these end-of-days dioramas are still fully resident in their bodies, but many have heads supported only by columns of bone. Some are still capable of mustering up a defiant gaze, even as they wander about paleontological boneyards and somewhat dystopic landscapes as if searching for long-lost friends. They don’t strike me as only mournful but hollowed out by the awareness that they soon will be forensic. (Begging the question of who will even be around to discover their remains?) Yet they are still alive, still sentient beings, and I think of them as introspective skeletons. 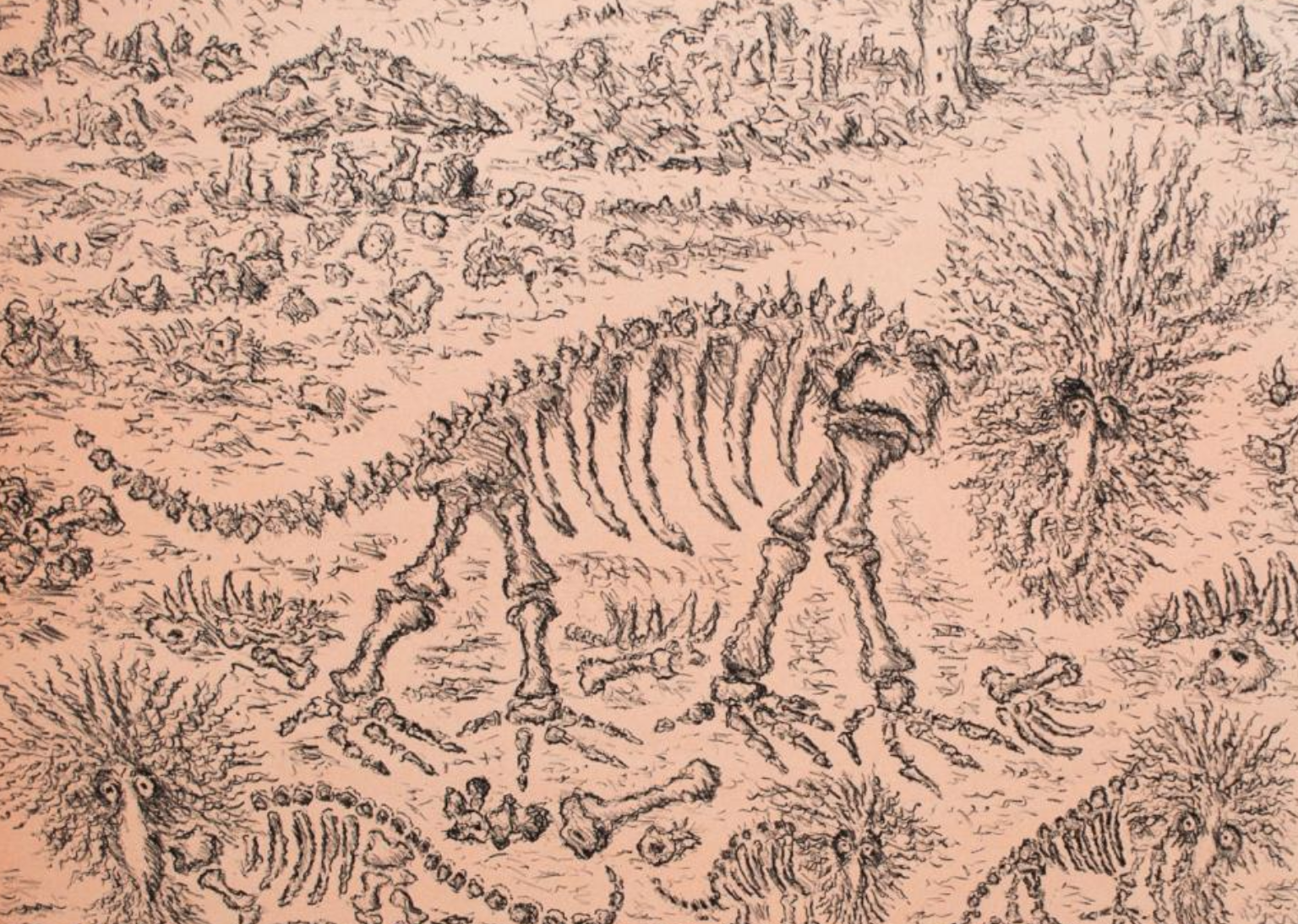 “I’ve given the drawings somewhat pessimistic and even forbidding titles, like ‘Thinking About Extinction,’” Koren said. “But had I provided more existential captions, it might finally have been the same for each one: ‘Who were we and what were we thinking?’”

On the aforementioned evening in 3 Penny Taproom, as we were about to split the bill, I said, “These figures seem so alone, so lost in their own thoughts.”

“Yes, at this point-in-time, given that they’re more or less on the verge of disappearing,” he said, “maybe they don’t feel much like schmoozing.”

On the drive home, under a bright hammock of moon, I thought, yes, of course, it would prove not just mortal exhaustion but an agonizing fate for maestro humorist Edward Koren: to no longer be able to schmooze about everything under the stars.

Howard Norman has completed a memoir about friendship, The Wound Is The Place The Light Enters You. He was awarded The Lannan Award in Literature.

The Best Reviewed Poetry Collections of 2021 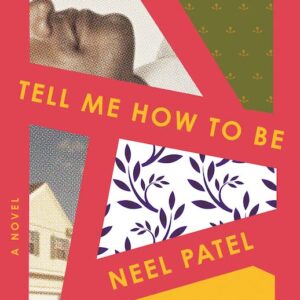 Tell Me How to Be RENU I’ve never liked American grocery stores. They’re too cold. Too many products line the tables and shelves. There...
© LitHub
Back to top
Loading Comments...