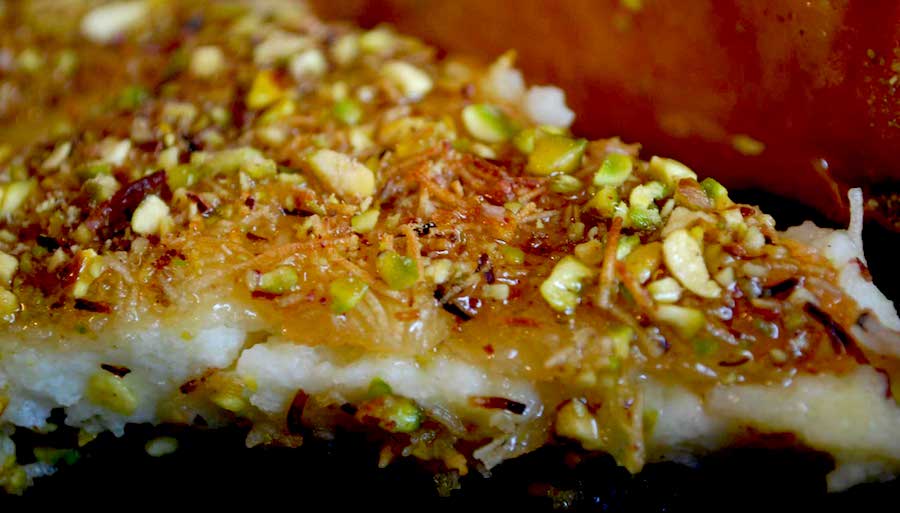 What a Beloved Dessert Reveals About Cultural Appropriation

All the knafeh I have eaten over the last two months has melted into one textural memory in my mind: crisp, butter-soaked strands of filo pastry or soft, golden-brown semolina draped over a slab of molten cheese, drizzled with a mildly perfumed sugar syrup on top. Serving up sharp counterpoints in one compact package—crisp pastry to soft cheese, syrupy sweetness underpinned by savory notes—knafeh is a complex yet far from conventional dessert. But even if I was fleetingly puzzled by its unfamiliarity a couple of months ago, I already knew in the deep recesses of my mind that I would one day grow to love it.

In the weeks preceding my departure from Sri Lanka, my previous home, I tumbled through the trapdoor of Arab American author Diana Abu-Jaber’s mellifluous description of Jordan in her memoir, The Language of Baklava. A stirring reminiscence of her childhood years spent negotiating a complex identity, equally shaped by her Jordanian roots and American upbringing, The Language of Baklava is anchored in Abu-Jaber’s love for the foods of her mixed heritage. In addition to the flaky, sugar-soaked filo pastry that lends the book its name, it also offers an homage to other Jordanian dishes. In particular, I was arrested by her description of knaffea, as knafeh is known in Jordan.

“It’s so hot that it steams in your mouth, and at first you eat it with just the tips of your teeth,” she writes. “Then the layers of crisp and sweet and soft intermingle, a series of surprises. It is so rich and dense that you can eat only a little bit, and then it is over and the knaffea is just a pleasant memory—like a lovely dream that you forget a few seconds after you wake.”

In Dubai, where I now live, I have had abundant opportunity to put that rousing description to the test. In this city that nurses an almost singular obsession with food, knafeh—also known by its other names such as kunafa or kunefe—is so beloved as to be ubiquitous. From age-old sweet shops that continue to hold onto time-honored traditions of knafeh making to modern restaurants that are not afraid to amend the rules, Dubai is swarming with a multitude of iterations of this iconic Arabic dessert. In a city whose culinary—and cultural—maxim seems to be “more is more,” here you can find three-tiered kunefe “cakes” where the cheese is swapped for thick rivulets of Nutella or bricks of crisp kunefe sandwiched with ice cream.

In Dubai, knafeh’s fluid popularity slices across geographical lines. While you would be hard pressed to find a Lebanese restaurant without kunafa on its menu, Turkish, Egyptian, Jordanian and Syrian eateries also stake a proud claim to it. Shorn of the heft of its historical context, knafeh’s ubiquity could be chalked down to its versatility in both form and flavor, which has allowed for it to be adapted and embellished.

But that would be telling only a sliver of the story.

“A lot of the food talk about cultural appropriation is doing exactly the opposite [of what it should].”

Historically, knafeh is a vital part of a storied culinary legacy that extends all the way back to the 15th century—or even earlier. Before the creation of modern nation states, the flavors of what we now know as the Middle East, were shared across a broad geographical continuum in the eastern Mediterranean that stretched from west Asia to north-east Africa. Known as the Bilad al-Sham (a historic Arab name for the greater Syrian region) or Mashriq (referring to the east) in Arabic, this region became known as the Levant (from the Italian levante, which means to rise, referring to the sun rising in the east) during the reign of the Ottoman empire. Although the geographical contours of the Levant no longer exist, the strands that held its cuisine together still connect the countries that once fell within its boundaries. This is why the cuisines of modern day Syria, Lebanon, Jordan, Palestine, Egypt, and even southern Turkey share close similarities, not just in the use of a common pool of ingredients such as olive oil, chickpeas, tahini and herbs such as zaatar, mint, and oregano, but also expressed through their devotion towards the tradition of mezze or shared small plates of dips, salads, and snacks.

To understand how modern geography may or may not have had a bearing on Levantine cuisine—the broad umbrella term used to describe the cuisines of these countries—I reached out to Reem Kassis, author of The Palestinian Table, an award-winning cookbook that celebrates Kassis’ cultural heritage through the recipes she gleaned from her family. “Since [these countries] were in recent history part of a single entity, travel was easy, borders were open, people intermarried, cuisine was regional, not national, and the differences in cuisine were a function of geography, religion, and landscape,” she explained. “[They were] similar to differences in the way two neighbors might cook the same dish.”

Having emerged from this common pool of culinary knowledge, knafeh’s origins are vague and dispersed. A 13th century Ottoman translation of Kitaab al-Tabikh, an ancient cookbook with over a thousand Levantine recipes, contained a recipe for qatayif, or Arabic for crepes. With time, the word katayif has come to be synonymous with the vermicelli-like strands of shredded filo pastry that are used to make knafeh. Katayif or kataifi is also occasionally used interchangeably to refer to the dessert itself, particularly in Turkey and Greece.

In each of the countries where it is made today, knafeh has slightly different inflections—in Turkey, for instance, it is served with a layer of crunchy kataifi not just on top, but also at the bottom. But although it is beloved throughout the region, nowhere is as closely identified with knafeh as Palestine. One of the iconic versions of the dish—knafeh nabulsiye—derives its name from the city of Nablus in the West Bank. Knafeh nabulsiye traditionally features nabulsi cheese, a salty, semi-hard sheep and ewe’s milk cheese that softens when it is heated, lending the dish its trademark chewy, stretchy texture.

Coveted for the particularity of its provenance, the fame of knafeh nabulsiye has spread far beyond the city that is considered its place of origin. Many legacy sweet shops and bakeries in Dubai proudly advertise their knafeh nabulsiye as a badge of honor. However, given that nabulsi cheese is expensive and hard to source, they use akkawi, a salty cow’s milk cheese instead. Other patissiers less preoccupied with authenticity use cream cheese, double cream or ricotta instead.

While the free flow of ingredients and inspiration may have been the hallmark of Levantine cuisine, the creation of modern nation states has complicated the discourse surrounding food in the Middle East. For instance, between 2009 and 2010, Lebanon and Israel were locked in a pitched battle for a place in the Guinness Book of World Records for making the world’s largest serving of hummus. Even though the “hummus wars,” as they came to be known, looked like an escalating display of showmanship—one of the highlights of the battle was when a whole village in Israel came together to produce four tons of hummus served in a satellite dish—the true contest for both countries had to do with a larger cultural claim to the dish. At the time, Israeli food journalist Ronit Vered noted in an interview with NPR, “Hummus became the symbol of all the tension in the Middle East.”

The conflict lies in balancing the knowledge that food can neither be divorced from its cultural context nor forcibly contained within a geographical area.

For Palestinians like Kassis, knafeh is an important artefact of a rich culinary history—but also a reminder of a national identity that has long been threatened. “For a people who have been denied an independent and self-sufficient state, and whose national identity is constantly undermined, constructs other than geography become vital to a sense of rootedness and identity,” she told me in an email interview. “Food for Palestinians becomes a way to reclaim their country, if not geographically, at least psychologically and emotionally. It becomes a tangible proxy with which to discuss the larger issues on the ground.”

With the burgeoning popularity of knafeh shops in Israel, the question of ownership delicately hovers over the dessert. According to food journalist Vered, the conflict lies in balancing the knowledge that food can neither be divorced from its cultural context nor forcibly contained within a geographical area. “With knafeh becoming a part of the cultural canon [in Israel], it has become a symbol of the conflict,” she told me. “Cultural appropriation is problematic. But a lot of the food talk about cultural appropriation is doing exactly the opposite [of what it should]. By defining that feta cheese is just Greek, UNESCO is saying that it is not for all humanity. In a way, this whole debate further divides us instead of bringing us together.”

On a sunny day in Dubai a few weeks ago, when the blistering summer was just on its way out, I found myself at a small cafe called Nablus. Located within the Al Seef neighborhood, which has been carefully restored to reflect what Dubai may have looked like in the 19th century, Nablus serves a memorable version of knafeh nabulsiye. As I cracked the crisp, golden brown pastry shell to scoop up the hot cheese underneath, I was reminded of Abu-Jaber’s description of the dessert in Life Without A Recipe, her second memoir published in 2016: “We were on some different kind of clock where stars and planets swam past the windows; inside, we were impervious to all but the pastry…If deliciousness is a kind of grace, this is it.”

Here, where an olive tree in the middle of the cafe is the only nod to the origins of its signature dish, there is no greater depth to the plate of kunefe in front of me than the obvious artistry that goes into making it. For a few moments, it allows me to imagine an ideal—if impractical—world, where it is perhaps possible to have a lighter hold on culture—and to believe that the more it is shared, the more supple it becomes.

Vidya Balachander is a food and travel writer and editor currently based in Dubai. Her writing has appeared in a number of international publications, including Saveur, CNN's Parts Unknown, Roads & Kingdoms and National Geographic Traveller, among others. Her work explores the intersection between food and anthropology.